After a six-week break, the FIM Enduro World Championship roared back into life in Italy for round three in Carpineti. Hot, dry, and dusty conditions ensured a challenge for all 140-plus competitors.

Getting the GP of Italy underway in style, Friday’s Akrapovic Super Test didn’t disappoint. Always a contender for the fastest time, Josep Garcia held true to form putting in a near-perfect run to get the job done.

Oldrati looked poised to grab the Super Test limelight on home soil with his time standing strong. But with Garcia finding an extra two tenths of a second, he had to settle for second. Ruprecht was hot on his heels for third and will be fired up to keep that momentum rolling.

Behind the three were a trio of Italian riders filling out the remainder of the top six placings. Andrea Verona (GASGAS) edged out Alex Salvini (Husqvarna) by one hundredth of a second for fourth. With Salvini fifth, Matteo Cavallo (TM Racing) was sixth.

Garcia began the day in a determined mood to remain at the head of the classification. However, Ruprecht had other ideas and came out swinging for the opening Super Test to draw level with the Spaniard.

Josep responded on the following JUST1 Enduro Test to open up a gap, but Ruprecht topped the POLISPORT Extreme Test to edge his TM Racing into the lead. 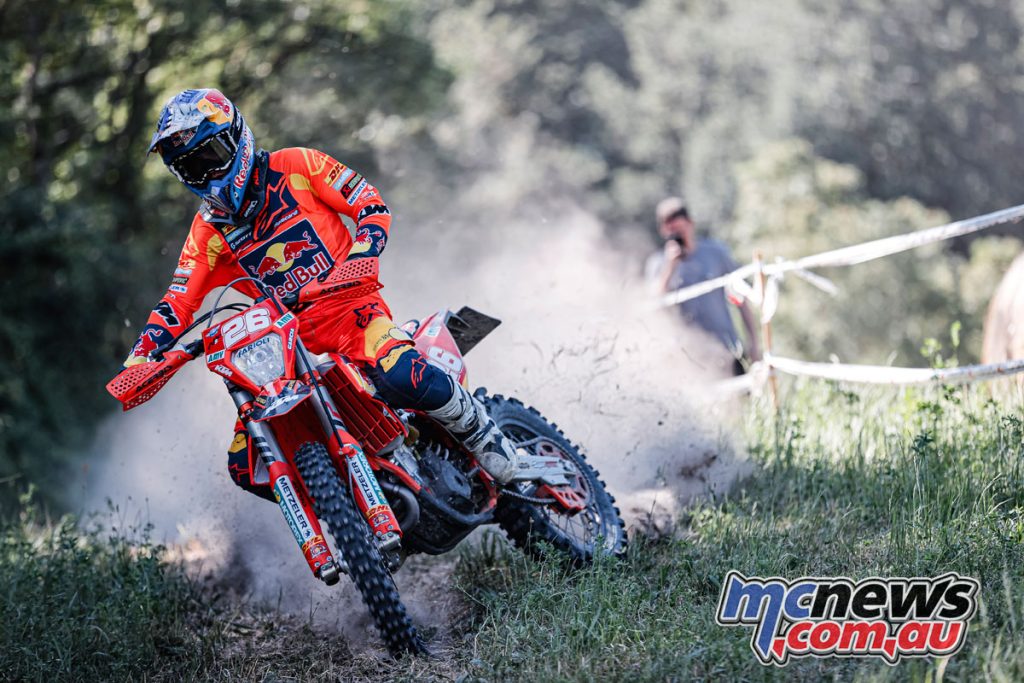 Throughout lap two of three, the duo exchanged test wins until Garcia finally got his nose back in front after the second ACERBIS Cross Test. With less than two seconds between them it was all very much to play for on lap three.

Stunning rides on the final JUST1 Enduro Test and POLISPORT Extreme Test saw Garcia extend his advantage out to a comfortable 17 seconds. And with no mistakes on the final ACERBIS Cross Test, Garcia ended his day as the clear EnduroGP winner over Ruprecht.

Hoping to get in the mix of the battle for victory at his home race, Verona wasn’t able to match the pace of the top two. Starting out this morning in sixth, he moved up to third midway through lap one and then controlled that position for the remainder of the day.

Behind the top three, the fight for the remainder of the top five was ever-changing. Honda Racing Redmoto World Enduro’s Nathan Watson faced a motivated Daniel Milner (Fantic) with little to separate them all day. Producing a top-three ride on the final JUST1 Enduro Test, ensured Watson did enough at just the right time to keep Milner at bay and claim fourth.

For the fifth time this season, Andrea Verona powered his GASGAS to the Enduro1 class win. Switching to Enduro1 for round three paid off for Australian Daniel Milner as he produced his best form of the year to date with a runner-up result. Italy’s Thomas Oldrati (Honda) completed the top three.

With Garcia and Ruprecht fighting for top honours in EnduroGP, the duo also placed first and second in Enduro2. Watson secured a well-earned final step of the podium with third. France’s Hugo Blanjoue (KTM) put in a terrific ride to take fourth ahead of Beta’s Steve Holcombe.

It was all change in Enduro3 with Husqvarna Factory Racing’s Mikael Persson claiming a debut win. The Swede rode impressively to win by over 30 seconds from TM Racing’s Matteo Pavoni.

Winning the final two ACERBIS Cross Tests outright, Pavoni – the 2021 Enduro Junior champion – will be eager to take the fight to Persson on day two. A great ride by France’s Leo Le Quere (Sherco) saw him finish in third.

France’s Zach Pichon (Sherco) continues to rule the roost in Enduro Junior. Pichon was near untouchable throughout day one as he raced his way to a commanding one-minute and seven-second winning margin over Roni Kytonen (Honda).

However, while Pichon held a comfortable lead, the battle for the remainder of the podium was tight between Kytonen, Jed Etchells (Fantic) and Luc Fargier (Beta). Winning the penultimate test, Fargier was gunning a debut podium result. However, a mistake on the final ACERBIS Cross Test saw his chance disappear and with Etchells setting the fastest time, he snatched third overall by less than two tenths of a second over Fargier.

TM Racing’s Wil Ruprecht and Red Bull KTM Factory Racing’s Josep Garcia faced off on Day 2 to see who would come out on top on Sunday.

Ruprecht meant business and fired the first shot by winning the opening Super Test. Continuing his run of rapid form on the Just1 Enduro Test, Garcia topped the time sheets on the opening lap to take over the lead. However, it was short lived as Ruprecht won the following POLISPORT Extreme Test and ACERBIS Cross Test to lead at the end of lap one.

Knowing Garcia would strike back on the second JUST1 Enduro Test, Ruprecht had to deliver. And deliver he did. Setting the fastest time as Garcia faltered, the Australian building himself a 13-second lead. That advantage remained stable for the next three tests, but the final Enduro Test was still to come.

Pushing hard to claw Ruprecht back in, Garcia ultimately crashed hard. Despite regrouping, he was visibly shaken as he limped home for an eventual 16th overall. Finding himself with some unexpected breathing room, Ruprecht went on to win the day and with it extend his advantage at the top of the FIM EnduroGP championship standings.

With Garcia slipping down the leaderboard, Andrea Verona capitalised and took his GASGAS to the runner-up result. Though not the winning result he hoped for on home soil, the Italian was more than pleased to better his performance from the previous day. Britain’s Nathan Watson ended his day just 12 seconds behind Verona to claim his first EnduroGP podium of the season.

Setting the fastest time on the penultimate POLISPORT Extreme Test, Thomas Oldrati (Honda) capped off his home race with a strong fourth. Having switched to the Enduro1 category for the GP of Italy, Fantic’s Daniel Milner clearly gelled well with his new bike, securing his second top-five result of the weekend with fifth and moving into ninth in the E2 standings.

“After a good fight yesterday with Josep I’m happy to have put in a good ride today to take the win. Of course, it’s not nice to have a competitor take a heavy hit, so I hope he’s all ok and good to go again. I’m happy with my riding, I had a few mistakes but we’re racing right on the limit to win. We’re back to Portugal next week, so I’m excited for that.”

“As always, my home GP was amazing, and it was incredible to see each test lined with fans cheering for me. It’s a shame that I couldn’t quite get the win in EnduroGP but I gave it everything I had. I won both days in E1, so I’m happy. On day one I was a little slow to get into it so for day two I really focused on my flow and it paid off. I ended up second, just 16 seconds from the win, so it was a big improvement. It’s now onto Portugal where the goal is to continue with my form from day two here and challenge for another victory in EnduroGP.”

“It’s been a good day. I struggled a bit yesterday, but today I got off to a strong start and was making time in the Enduro Test. It was nice to be in the fight like that all day.”

While hopes of a home EnduroGP win for Andrea Verona didn’t materialise, the Italian secured yet another victory in Enduro1. The fight for the runner-up result was extremely close between Oldrati and Milner. Despite pushing for all his worth on the final test, Milner had to settle for third behind the Honda rider, missing second place by just five hundredths of a second.

The Enduro2 class saw Will Ruprecht claim a comfortable win. The Australian had the measure of his rivals, finishing 28 seconds clear of Watson in second. It was all smiles for France’s Hugo Blanjoue with the KTM rider claiming his first major podium result in third. A rider who’s growing stronger and stronger with each round, he’ll be one to watch next time out in Portugal.

The GP of Italy continued to prove itself as a coming of age for Sweden’s Mikael Persson. The Husqvarna Factory Racing rider secured his debut class win yesterday and then backed it up again today with another Enduro3 victory. The double victory now sits him as the new Enduro3 points leader.

After placing third on day one, France’s Leo Le Quere (Sherco) went one better to finish as runner-up on day two. With lots of new faces visiting the podium in Italy, Spain’s Marc Sans Soria (Husqvarna) got his first taste of champagne glory with third on Sunday.

“It’s been a long, dusty and tough weekend, but overall it’s been awesome! Taking my first ever Enduro3 win on Saturday I then managed to win again on Sunday, which was amazing. And now I’m leading the championship, so honestly I can’t really ask for more than that. I’m a little in shock! Each day I just kept pushing as hard as I could without going over my limit. My weak spot was the enduro test and I improved some speed there so that was a good positive. We roll on to Portugal next weekend, so the goal is just to keep this momentum going!”

While the senior classes saw lots of movers and shakers, Enduro Junior remained consistent with France’s Zachary Pichon (Sherco) riding to victory. Cementing himself as the rider to beat in 2022, Pichon has now secured six consecutive wins this season. Motivated by just missing out on a debut podium on Saturday, Beta’s Luc Fragier was on flying form and improved his position, jumping from fourth to second. Sweden’s Max Ahlin (Beta) held off Roni Kytonen (Honda) by one second to take third.

Dusted off from his fourth place finish in last weekend’s Erzbergrodeo, Billy Bolt made a last minute decision to jump into EnduroGP competition. Arriving with no expectations and having had little time to walk any of the event’s special tests, Billy simply set about enjoying the change of scene.

Fastest Enduro3 rider on the Friday Super Test saw him get off to a great start. Going on to set some competitive times, while also topping the penultimate extreme test, Billy ended his day 10th in Enduro3.

Starting day two with more familiarity of the special tests, Billy looked to improve on Sunday. Claiming multiple top four test times, along with topping another extreme test, Billy took his TE 300 to an improved ninth in Enduro3.

“Honestly, I really enjoyed coming here even though I didn’t have the best preparation. I struggled a lot on Saturday as I arrived late from Erzberg and didn’t walk any tests. In a strange way I appreciate coming to race EnduroGP and getting beat. These guys are so fast at what they do and being put down a peg or two is humbling. All weekend I was riding against myself and just trying to better myself. And I think I did that with each special test.”

The WPTGlobal FIM EnduroGP World Championship continues with round four next weekend at the GP of Portugal in Coimbra-Souselas on July 1-3.