In the days when a motorcycle and sidecar was a viable means of everyday transport, sidecar racing was also a highlight of any race programme, not least the annual Easter bash at Mount Panorama. This is not to denigrate the modern racing three-wheeler, but a ‘worm’ is about as far removed from the original 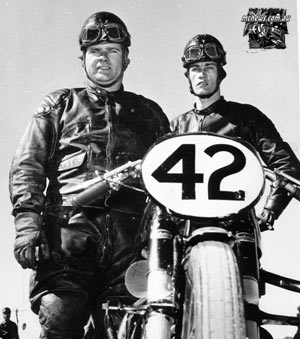 sidecar concept as it is possible to be. Spectators, and there were around 15,000 of them at Bathurst every Easter, identified the racing bike and chair with what they saw on the road, and in many cases there was little difference.

What caused the outfits to soar in popularity was the arrival of the first post-war Vincent-HRDs; big booming V-twins that demanded a stout heart as well as physical strength to tame them. When the sidecars made their post-war reappearance at Mount Panorama in 1947, the star attraction was the gleaming new 1000cc Vincent imported by Les Warton at the considerable cost of £400 ($800) – when such a sum would buy you a nice suburban house in Sydney! Even giving away 1 minute 40 seconds to the limit man in the Sidecar Handicap, Warton rocketed through the field to snatch the lead on the final corner. Thereafter Vincents ruled the roost, lopping chunks off the lap record each year, particularly when the Black Lightning became available.

In 1952 the name Sandy McCrae began to appear in the results, with a second behind Frank Sinclair’s HRD in the Senior Scratch race and a win in the Handicap. It was to be the beginning of an era of dominance not seen before or since. The burly Queenslander was actually born in Sunshine, Victoria, but moved to Brisbane with his parents when he was ten years old. His father Con had been a successful Speedway Sidecar rider in the 20s, racing mainly at the Melbourne Motor Drome. Joining the Kedron Club in Brisbane, Sandy rapidly became his state’s top chair exponent, not just in road racing but in speedway and grass track as well, with a stable of Vincent twins. Back at Bathurst for 1953 McCrae won both Scratch and Handicap races, slicing 8 seconds from the lap record in the process. His quest for back-to-back Senior Sidecar titles looked over when his engine refused to fire from the push start, but once under way he and passenger Monty Petrola charged through the field to win the 1954 6 lap Australian Sidecar TT from George Murphy’s Vincent. Now the acknowledged king of the class, Sandy set about extending his advantage by constructing what became known as the McCrae Special – a Black Lightning engine shoe-horned into a Norton featherbed frame that had been lowered and lengthened. With new passenger Arthur Walz (beanpole thin in contrast to McCrae’s increasing girth), the duo, on paper, looked unbeatable when Easter 1955 rolled around. But after topping the practice times and scorching from the grid in a cloud of tyre smoke, McCrae was out inside the first lap with a split fuel tank. Other commitments kept Sandy away from Bathurst in 1956, and in 1957, after a terrible start, the Vincent seized when trying to catch the remarkable Bob Mitchell’s 500 Norton.

After three disappointing years, McCrae and Walz returned to their devastating best to street the 1958 Senior Sidecar TT field, then repeated the punishment the following very wet year when they finished with two minutes over the second placed Gordon Turner. Could he make it three in a row? No problem. Lindsay Urquart’s smart new kneeler Norton was seen as the main threat in 1960 but in the race the black Vincent simply thundered off into the distance for McCrae’s fifth Senior win. Number six came up with equal ease just twelve months alter, and number seven a year further down the track. For 1963 McCrae decided to construct a brand new outfit, still built around the venerable Vincent engine. But the work was not completed in time and the grid was McCrae-less for the first time in more than a decade. All was rectified for 1964, but a dropped valve in practice meant an all-nighter. In the race, Sandy faced some tough opposition in the form of Alec Corner’s Vincent. The pair battled royally, but a cylinder head bolt let go, handing the race to the Victorian. He didn’t even make the race in 1965 when the engine exploded in a big way in practice. The repaired engine let go again in 1966, and it looked like the McCrae era was over.

But those who had written him off were forced to eat their words in 1969 when 43-year old Sandy blew them all away again, taking win number eight from Stan Bayliss’ Honda by over a minute. However the writing was on the wall for the aging Vincents, and reluctantly Sandy built a new outfit for 1971 using the now ubiquitous CB750 Honda engine. This grew in capacity to 900cc and was replaced, for his last Bathurst tilt in 1974, with a Kawasaki H2 two-stroke triple. But there would be no more victories. The most successful sidecar rider in Australian history died soon after in a Brisbane Hospital while undergoing a relatively minor sinus operation. Thankfully, his big black Vincent lives on in the Motorcycle & Heritage Museum in Birdwood, South Australia, owned by former speedway sidecar champion Bill Mitchell.