“My drift bike is the most fun I’ve had on two wheels, I absolutely love the thing,” he says.

“It’s a standard 990 Super Duke R with Akro pipes, Tag ‘bars and an eight-inch extended swingarm which gives me a bigger sweet spot for sliding and makes it easier to drift.”

The Melbourne stunt entertainer has been using the 990 to incorporate large-scale drifting into his race track shows, where he has a little more room to ‘hang out’.

The actual debut of the 990 drift bike was at the Australian Supermotard Championships at Proserpine, but being a smaller motard track Lukey Luke was only using first and second gears most of the time. At the Hidden Valey Australian Superbike Championship round though, it was another story…

“I was able to drift the whole track from 120kph up to 170kph, it was just awesome. And at the Phillip Island ASBK round I was able to slide around Turn 12 and onto the straight at 150kph.

“The response from people to the drift bike people has been amazing because no one has seen this sort of thing in Australia before. There’s a lot of smoke – the fans just love it.”

When he’s not melting tyres on the 990, Lukey Luke is using the KTM690 Super Duke R for the shows with tighter confines.

“It’s my main bike for technical and trick riding like 180 Stoppies, Stoppie Kisses and Bunny Hops. It’s a great all-rounder; super nimble, light with a very torquey engine and easy to throw around.

“It’s been an awesome year so far, KTM have been super supportive, and I’ve got videos coming out in the next month or two, so look out on the KTM Australia and Lukey Luke pages on Facebook and at Lukey_Luke on Instagram.

“One thing I’m dying to get my hands on though is the new 1290 Super Duke R! I’ve spoken to riders and read reviews and the responses have been just out of control! I love my 990 so it’s hard to believe they’ve improved on it. I really can’t wait to ride it.”

In one of his busiest years to date Lukey Luke has several more big shows planned for the year, including the Sydney Motorcycle Expo.

“The Expo should be awesome. It’s a really good vibe there and I should be miked up while I’m performing, so I’m really looking forward to being able to connect with the crowd in this way.”

For more information on KTM Motorcycles, visit www.ktm.com.au or www.facebook.com/KTMAustralia . 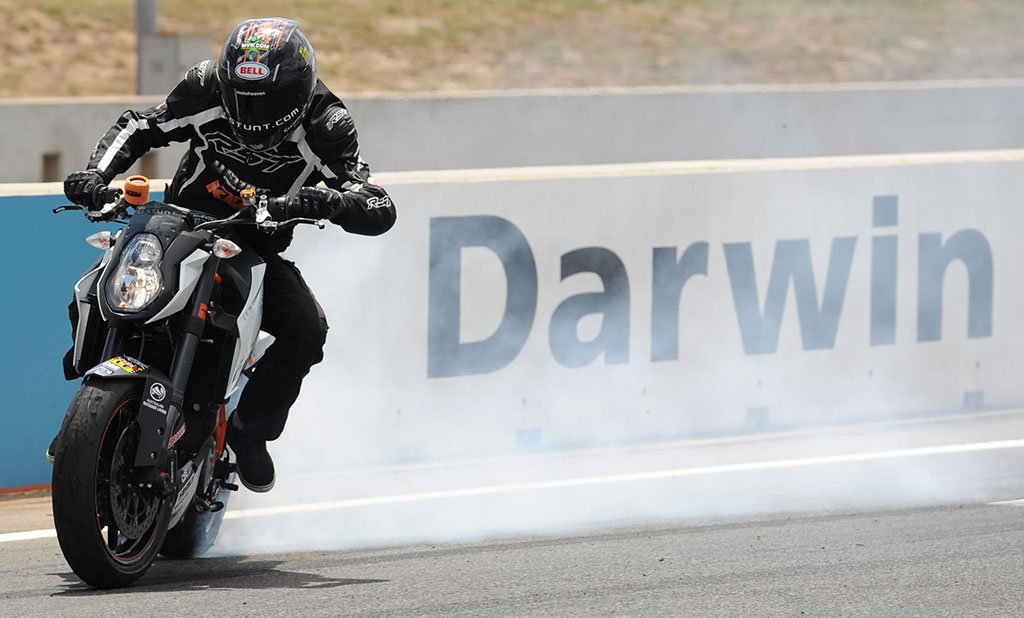