The DR400 is Suzuki’s latest entry in to the very popular and competitive 4-stroke MX and Enduro market.  A day with the kick-start enduro model was spent on a large home-made MX track with plenty of jumps and deep sand.  Recently we also took a blast on a road registered (but de-restricted) electric start version.

The main step in the de-restricting process is removing the muffler baffle.  This provides quite a large difference to the power.  The next step is to remove the airbox cover and install a .178 jet to crisp it right up.  Now you have around 40 horsepower at the rear wheel.   Some 5 more horsepower than the current model DR650!

A number of sand drags were held with 2 x DR400 and 1 x YZ400.  When they weren’t getting up to silly things like grabbing each others bars at 100 kph we found that basically there was nothing in it.  With riders switching bikes and around a dozen runs made it was decided that they were level pegged in the acceleration department.  We didn’t have an XR400 along for comparison but know from experience that the Honda would have been absolutely trounced by both the Yamaha and Suzuki. 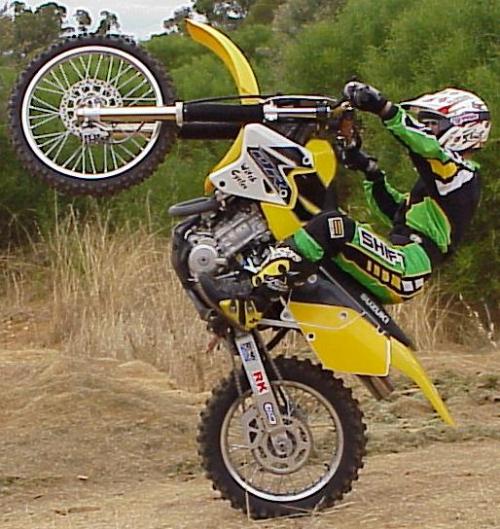 The YZ400 has a slightly snappier, two stroke MX, type of delivery.  While the DR has a much broader spread of power.  This maybe gives the YZ a slightly better engine for deep sand work, but not by much.  The DR feels as thought it would be the weapon of choice on gravel tracks etc. due to the lengthy spread of controllable power.  This shows up clearly in the dyno charts at the bottom of this page.

The YZ maybe has a very slight edge in the suspension department.  However, the difference is not enough for someone of my skill level to be able to exploit.  The electric start DR handles quite well on the street.

It can be backed in and drifted out if you are game.  Mono’s are not optional – if you get on the throttle hard the front stands – which of course amused us to a great extent.

The kick-start DR proved much easier to start than the YZ.   Of course the electric start model whirrs in to life with no drama at all.   At last – a reasonably priced, great performing dirtbike with electric start!   Suzuki should sell these by the bucket-load for that reason alone.

The Enduro DR costs around $9,500 (AUS).  The ADR approved electric start DR400 is available for $9,990 + on road costs.  Basically the only differences between the two is the addition of road-gear (indicators etc.), battery and starter motor to the registrable model.  It is not a watered down version and is only a few kilos heavier than the enduro.  The DR-Z 400E has the goods, complete with very short dirt-oriented gearing that enables you to stand it on the back wheel, in even as high as 3rd gear, by just tugging on the bars.  For a lot of road work I would definitely be adding a tooth to the front sprocket to give the bike some longer legs.

We ran the DR up on the dyno in completely standard restricted form against a piped WR400, and a DR400 with muffler baffle removed.  The results can be seen at the bottom of the page.

Click HERE to start opening a new page with more images of the DR while you read the specification and dyno charts.

The de-restricted DR and WR have similar peaks of around 40 horsepower.

The DR looks to have a much broader spread of power.   The WR seems to hold peak power for a very short period while the DR looks to stretch it’s peak across 4 many times as revs as the WR.  Quite an achievement.