Suzuki have come out swinging for 2006 in their quest for a bigger slice of the huge 600cc road bike market with an all new GSX-R600 that is leaps ahead of its predecessor.

Suzuki engineers left no bolt untouched in their efforts to make their latest and greatest middleweight the best it could be, and those changes have firmly put the GSX-R back in the hunt as a top contender in the class. After spending time at Phillip Island with many of those engineers that treat this latest product as their own baby I was delighted to see how passionate they were about their offspring.  And while engineers from any country can largely be a very strange lot the Suzuki boffins from Japan were very funny dudes indeed and there was never too much time between laughs while in their company.

The laughs obviously come easy to them, as times are good for Suzuki. Over 67,000 GSX-Rs rolled out of the Hamamatsu factory last year, which has taken the total number of GSX-R sales close to 700,000! The current GSX-R1000 model has repeatedly been crowned top dog in the litre bike wars since its inception. While the litre machine has only seen minor revisions for the new model year, the company has produced an all new Supersport contender in an effort to clinch the top dog moniker in that category also.

While the engine is new, it does retain the same 67 x 42.5 bore and stroke dimensions as before.  Interestingly this is identical to Honda’s CBR600RR and Yamaha’s latest YZF-R6. Yamaha did have a different bore and stroke previously but have gone with the consensus for their all new 2006 model.  Kawasaki’s ZX-6RR also utilises those exact dimensions which means that all four Japanese middleweights produce their 599.4cc in exactly the same way.  Spooky huh?

Suzuki has changed the layout of the crank and transmission shafts, however, and as a result have managed to shorten the overall length of the engine by a significant 54mm.  Cylinder pitch has been reduced from 80mm to 76mm, which makes the powerplant 16mm narrower overall. Along with a 20mm reduction in height this makes for one very compact package.

Interestingly, the inertia of the forged steel crankshaft is up by 16% in the quest for better traction characteristics at the limits of performance.

But how does it work? 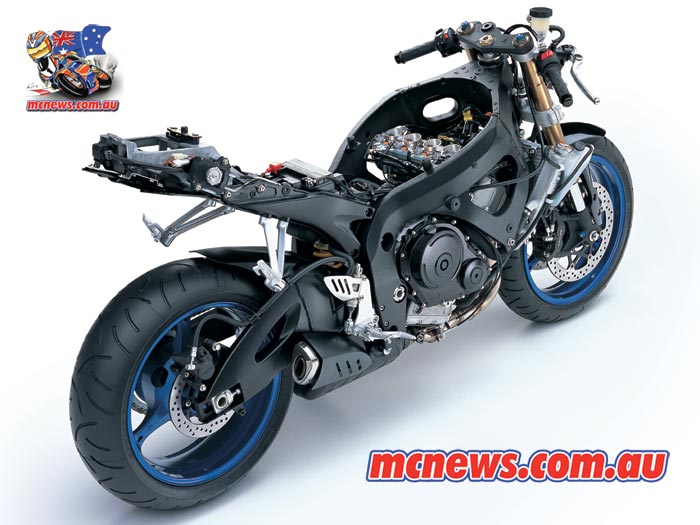 It works very well indeed. From 6000rpm engine response is excellent and a vast improvement over the previous model. Below 6000rpm the bike can flutter a little through the transition brought about by the valve in the Suzuki’s exhaust that apparently helps with the bottom end power delivery.  It is not all that noticeable while cruising around, but when lent over as far as your comfort zone allows around a corner like Phillip Island’s tight turn four it can be a little disconcerting. I found a cure though. I stopped being such a pussy on the way in so I could make sure I had more than 6000rpm spinning at the slowest point of the turn in second gear.

The engine then builds into an impressive mid-range before it starts to sign off a little over 14,000rpm.  That might sound a low number but perhaps Suzuki’s tachometer actually reflects circumstances a little closer to reality than some of its Supersport competitors.

Down the main straight it was enough to allow me to repeatedly hit more than 250kph before wimping out early for turn one. (In comparison I managed 275kph on the GSX-R750, while three-time Australian Superbike Champion Shawn Giles was managing those sort of numbers on the GSX-R600 thanks to a much greater entry speed onto the main straight and a larger pair of coconuts for turn one).

The shortened engine has allowed Suzuki to fit a 35mm longer swingarm in a further quest for maximum traction while retaining the 1400mm wheelbase seen on recent models. And it works as the new Bridgestone BT014 rear tyre held up to a full day of abuse at Phillip Island with only the slightest squirms of protest towards the end of each 20 minute track session.

Thanks to the narrower powerplant, Suzuki have also been able to trim fat off the machines girth for a slimmer feel with the frame width reduced by a significant 35mm over the previous model. The shorter fuel tank and redesigned seat give the rider a hip to bar measurement a noticeable 30mm shorter than before. Making the slim perch an even more attractive prospect is a 15mm lower seat height and new foot pegs that can be moved both vertically and horizontally through a 14mm plane, further enhancing rider comfort. I never saw reason to adjust a thing and could tuck in behind the screen of the new GSX-R600 perfectly with never a hint of wind buffeting around the helmet, even at over 250kph down Phillip Island’s main straight.  In fact, I found the tuck position while in attack mode just about perfect for my 180cm frame. 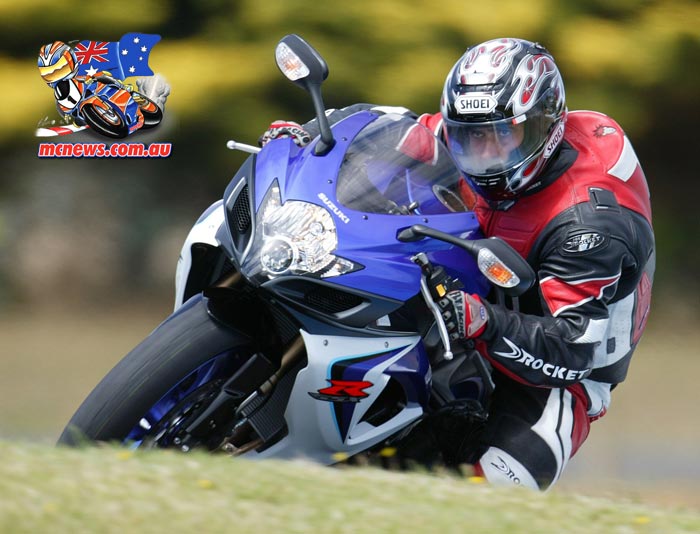 A more visually obvious change is the move to a stubby exhaust outlet just behind the pegs, with the muffler system now situated under the engine and encased in the lower fairing. The change of engine angle and oil pan shape facilitated this change which has moved the weight of the muffler and pipe system much closer to the centre of mass both vertically and horizontally.  Suzuki has carried it off quite well, and I honestly think you can feel the improvement that comes from such a system.  Laughable as that might sound, I can only comment on the feel I got from the bike and that was indeed that the weight of the machine felt very low and centralised. This could be particularly felt when braking and tipping into a corner and was perhaps accentuated by the low seat height.  Although I must say I never really gained full confidence in the BT014 front tyre in order to get as aggressive as I might have done otherwise when tipping into the tighter turns.

The suspension felt like a great compromise between road and track.  The GSX-R600 is noticeably softer than its 750cc sibling, but still offered enough track performance for all but a serious ‘A’ group track day punter. The 99% of other riders out there I think will enjoy the fact that Suzuki have not gone too far overboard with spring and damping rates for the sake of outright bragging rights in some fanciful track comparo conducted by a bunch of racers.  I have not covered any road going kilometres on the new machine but certainly got the feeling that out there in the real world of potholes and road corrugations the GSX-R will win many friends. And the very low seat height and adjustable peg position will ensure that most riders will find the GSX-R a comfortable perch for lengthy strops around the countryside.

A radial master cylinder and Tokico four-piston radial calipers clamp on larger 310mm discs and provide amazing stopping power. Never did the adjustable reach lever require more than one finger to dial up huge braking forces. All the while the new slipper clutch helps the machine remain utterly composed while banging your way down through the box. These factors combine to offer braking performance that can be summed up in one word; awesome! It seems every time I get to thinking that brakes have come as far as we can expect them to come I get pleasantly surprised once again. Not always from the outright stopping power at the lever, but instead the improvements in the way the bike behaves under brakes and also the level of feel and control available through a single digit making such little effort on the lever.

While the addition of a gear position indicator seems pretty naff, I actually quite like it.  It can be handy when you are short shifting around town or for those occasions when you’re not quite sure if you had already shifted in to top gear while negotiating traffic etc. The instrumentation is quite comprehensive. Along with the aforementioned large gear position indicator there is the normal LCD speedo flanked by a conventional tachometer along with a tripmeter, clock, adjustable shift light, fuel warning light, oil pressure light, coolant temperature light and an immobiliser light as well as the usual bank of idiot lights for high beam, neutral, FI and indicators. Unfortunately, we never had a chance to test the effectiveness of the headlight or to gauge road going fuel consumption.

The new model is a huge leap forward over its predecessor and firmly puts Suzuki back in the hunt for outright middleweight honours. Early reports from overseas suggest that it is perhaps the best of the Japanese 600s when all factors are taken into account. By this I mean factors other than the sole criteria of outright racetrack performance, itself an area where the machine certainly doesn’t lack any speed.  The riding position and wise damping rates seems to be where it wins most favour when stacked up against the opposition.

Suzuki’s 2006 GSX-R600, in my book the best looking GSX-R yet, is expected to land on showroom floors late next month. Read on further for the full technical specifications along with a wide choice of wallpaper images for your desktop followed by an extensive detail gallery.