Suzuki look back on their history of success in MotoGP

Suzuki World Champions once again in 2020

After a long wait of 20 years since the last title with Kenny Roberts Jr. in 2000, Joan Mir has brought the MotoGP World Championship title back to Suzuki in emphatic fashion.

The young Spaniard, in only his second season in the top class, put together an incredible campaign with Team Suzuki Ecstar in what has been an extraordinary and highly-demanding 2020 season. He takes the much coveted crown one round ahead of the closing race, due to the 29 point advantage that he has over his closest competitors after the GP of Valencia.

This Grand Prix weekend at Ricardo Tormo circuit sees Team Suzuki Ecstar reap the rewards of a superb 2020 season, in which the results obtained by Mir and Alex Rins has put Suzuki on the path to the ‘Triple Crown’: The Riders’ Championship, Teams’ Championship, and Constructors’ Championship.

The 2020 World Championship has seen Suzuki come full circle, celebrating success in what has been an important year in the company’s history:

The 2020 Riders’ World Championship is the 16th title for Suzuki and the second for Joan Mir, after his crown in the Moto3 class in 2017. Mir is the 10th rider in history to win a title with Suzuki considering all categories, and the seventh in the 500cc/MotoGP class.

It is also a historical and momentous day for Team Suzuki Ecstar, as it becomes the first Team in Suzuki history to win the Teams’ World Championship.

“I would like to congratulate and express my gratitude to Team Suzuki Ecstar and Joan Mir for winning the MotoGP World Championship in such an unprecedented and tough season due to the COVID-19 situation in 2020. Also to Alex Rins, who has put together an extraordinary championship, being still in the fight for second place. This is Suzuki’s 100th anniversary and in this memorable year, we won the MotoGP championship, which is the world’s highest series of motorcycle racing. And motorcycle business to us is one of the key sectors our seniors started and have built up over many years. I would like to thank all the customers, fans and dealers who always encouraged and supported Suzuki, and all the suppliers and sponsors who supported us. Our team staff members, riders, and furthermore all the staff who backed this activity by Miyakoda and Ryuyo, Japan. Since returning to the MotoGP, I am very proud of the team that has overcome various hardships, made steady progress year by year, and finally became the champion.”

Suzuki has its historical roots in another industry, far removed from motorcycles and racing. Founder Michio Suzuki was an innovator who built a weaving factory called Suzuki Loom Works in the small coastal town of Hamamatsu, in Japan’s Shizuoka Prefecture, in 1909. The production focused on cotton fabrics.

However World War II and the post war period left Suzuki in crisis and forced large-scale restructuring. In 1952, as a result of this climate of uncertainty, Suzuki decided to manufacture their first motorised bicycle. By 1960 Suzuki made its racing debut at the Tourist Trophy in the Isle of Man, as the first ever race in which the manufacturer participated. All three Suzuki entrants finished the race.

Degner designed Suzuki’s new 50cc and 125cc racing machines in 1961, and remarkably the following year, in 1962, he became Suzuki’s first World Champion taking the crown in the 50 cc class.

In the final round of the racing calendar, New Zealander and former rugby player, Hugh Anderson also gave Suzuki their first win in the 125cc class. It happened at the Autódromo Oscar Alfredo Gálvez in Buenos Aires, Argentina.

1963 marked Suzuki’s second full year in the World Championship, while a development engineer in Hamamatsu, Mitsuo Itoh, took an extraordinary victory at the Isle of Man TT. This memorable feat went down in history, as Itoh was the first, and only, Japanese rider to have conquered the dangerous roads of the island.

After the success of Anderson, in 1966 it was Hans-Georg Anscheidt’s turn to explode onto the scene. The German rode the fabulous RK66, a two-cylinder prototype capable of reaching 170 km/h. He confirmed his dominance in the 50cc category for three years, from 1966 to 1968.

The 1970 World GP 125cc Championship was won by Dieter Braun on a bike on loan from Suzuki.

British legend Barry Sheene took the Championship for Suzuki in 1976 with five superb victories, and again in the 1977 season with six. He remains the last British rider to become World Champion in the reigning class. Sheene was the first rider to become a celebrity outside of the race track. Considered by his fans almost like a ‘Beatle’ for his character, his lifestyle, and outlandish behaviour.

In the 80’s Suzuki turned to Italy to extend their dominance. Marco Lucchinelli and Franco Uncini both proved successful in a private Italian structure running Suzukis, called Team Gallina which was created in 1975.

Fighting with Kenny Roberts and Randy Mamola, Italian Lucchinelli was crowned the 1981 World Champion to take his place in MotoGP history. The charismatic Italian rider, nicknamed ‘Crazy Horse’ for his wild riding style, won the crown with an RG500.

In a year that saw the grid full of further legendary names including Freddie Spencer, Kenny Roberts and Barry Sheene, Uncini took the title on his Suzuki with five victories and seven podiums.

Another of the talents nurtured by Suzuki, Schwantz had one of the most spectacular riding style ever seen in the World Championship. He pitted his huge talent against his compatriot Wayne Rainey, with whom he maintained an extraordinary rivalry throughout the years. Texan Kevin Schwantz made history when he was crowned World Champion after epic battles with Wayne Rainey, in a year full of well-known names, including Mick Doohan, Luca Caladora, Alex Barros and Alex Crivillé. The Texan had extraordinary charisma and his style remains unforgettable. Not least due to his “full gas” attitude on the bike and his seemingly impossible braking at the limit of physics!

Kenny Roberts Jr., son of the famous ‘King’ Kenny Roberts won the 2000 Championship after a total of four victories. That title, the sixth for Suzuki in the premier category, was very special as it put an end to a drought of seven years without a crown. Kenny won it ahead of promising youngster Valentino Rossi!

After winning the title in 2000, Kenny Roberts Jr. made history when the Roberts family became the first Father/Son World Champions. 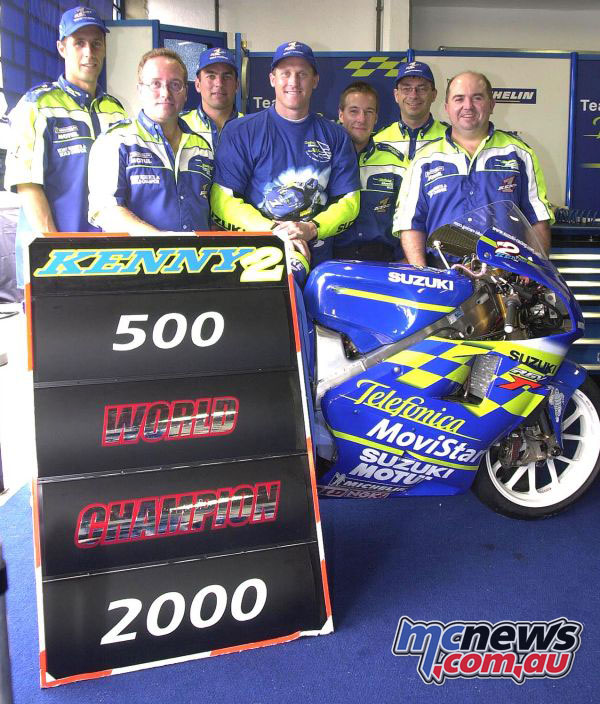 In 2002 the Motorcycle World Championship changed its name to MotoGP, but that wasn’t the only change as new rules saw the introduction of 1000cc four-strokes. After a bedding in year where both 500cc two-stroke engines and 1000cc four-stroke engines were allowed, it became immediately clear that the latter had more potential, and all manufacturers focused their development in that direction.

Australian Chris Vermeulen would give Team Rizla Suzuki an epic victory in the rain at Le Mans, achieving the brand’s first MotoGP victory in 2007.

After a three year break from the World Championship (from 2011 to 2015), Suzuki returned to the scene with Team SUZUKI ECSTAR. Spain’s Maverick Viñales flourished, achieving another win for Suzuki, this time at Silverstone. By 2019 Alex Rins managed to win two races during the season (Austin and Silverstone) to finish the year fourth in the Championship.

In an extraordinary year, with a shortened and condensed calendar, the Mallorcan’s incredible consistency and impressive focus paid off at the end of the 14 races and he took the Riders’ World Championship in style for Suzuki after a 20 year wait for the factory. This achievement was made even more special as 2020 marks the 100th anniversary since the Suzuki company was founded, and the 60th anniversary of their start in racing.

“World Champion? It’s really hard to find the words at the moment, but I must say thank you to so many people; to Suzuki for this opportunity, I’m so happy to give them a title! To be the person who brings them another crown after 20 years is an unbelievable feeling and a true honour. The entire team did an incredible job, and I’m just so overjoyed with this championship win. I’ve come a long way since being a child with hardly any money to go racing, and my family are to thank for this. I worked very hard to get to the top and this reward is amazing. Today’s race wasn’t easy, but I got the result I needed and I hope to have a great end in Portimao. It’s time to celebrate but we must do it responsibly.”