MCNEWS.COM.AU was lucky enough to put the new machine through its paces at the picturesque Barrabool Moto X circuit west of Geelong.

The RM-Z250 L0 has received a host of updates and new features, the most obvious of which is the lack of a carburetor. Yes, like they did with the RM-Z450 in 2008, Suzuki has upped the ante in the quarter litre class with the first production Motocross machine to feature fuel injection.

Suzuki have had a lot of racing success in recent years both here and abroad with Chad Reed winning the AMA Moto Cross in 2009, the Inaugural Super X Championship here In Australia, Ryan Dungey claiming the 2009 AMA west coast lites and also the AMA Motocross championships, and here at home in our domestic motocross series Matt Moss came up victorious in the 2009 Australian Pro-Lites Championship and is currently dominating the Super X Lites series on the new injected RM-Z250. You can’t argue with results like these and it is clear that the RM-Z250 has been developed through competition and as such I was more than eager to get out and cut some laps on this new machine.

From the moment we first rocked up at 8:30 am and saw the Barrabool track for the first time I just couldn’t wait to pull on the helmet and get amongst it. It is without a doubt the most picturesque moto cross circuit I have been to.

I was always a little bit sceptical of fuel injection on Motocross bikes; that was until I owned one!

Fuel Injection seems to make the bikes so much easier to get on the throttle in almost any situation. They don’t cough and miss if they are loaded up too much and the RM-Z250 L0 is no exception.

From the moment I started the bike and rode out of the pits onto the track I was amazed at just how smooth and nimble this bike feels. On the dyno the new 2010 model is showing an increase of 2.6 hp over its 2009 predecessor. This is a massive improvement for a four-stroke 250.

After a couple of warm up laps it was time to nail this thing and I can say that the dyno isn’t lying. This bike is smooth and fast!

The fuel injection incorporates a 43mm throttle body with a progressive linkage and battery-less fuel pump. Revised cam timing and intake ports have improved high end rpm power, without taking away from the impressive low-mid range power and torque. This bike definitely has good low and mid-range power pulling strong from right off the bottom without too much need for excessive clutch work.

Barrabool is a great place to test a motocross bike with a good range of testing points from the fast undulations to some hard packed sections and rutted corners.

The new RM-Z250 has incredible feel and response from throttle to rear wheel traction and seemed to hook up and find drive instantaneously on exiting the corners.

Acceleration for a 250 was probably what shocked me the most.

I am traditionally a 450 rider with little experience on the 250s but I was surprised at just how well this bike gets from corner to corner.

The obvious benefits of being lighter than its big brother are that it feels like it stops on a 5 cent piece. Standard wave rotors add that all important bit of bling to the braking hardware

After a session out on the RM-Z250 we made a couple of small changes to suspension.

I always seem to like things a little softer in the front end to help feel over braking bumps.

There is no shortage of adjustments with the Showa twin chamber 47 mm forks, 22-way compression and 20-way rebound.

The rear shock linkage has also been redesigned to help alleviate thrust backlash and coupled with the Showa rear shock it has delivered improved rear end traction.

We only needed to soften up compression by 2 clicks on the front and it had the desired effect. The RM-Z250 L0 had no trouble absorbing some of the bigger fast drop off jumps and felt stable with decent feel over the braking bumps. Taking into consideration that I am about 70kg, the suspension in this bike would seem to be pretty on the money for most guys, other than the ones that were thinking of auditioning for the biggest loser next year!….. 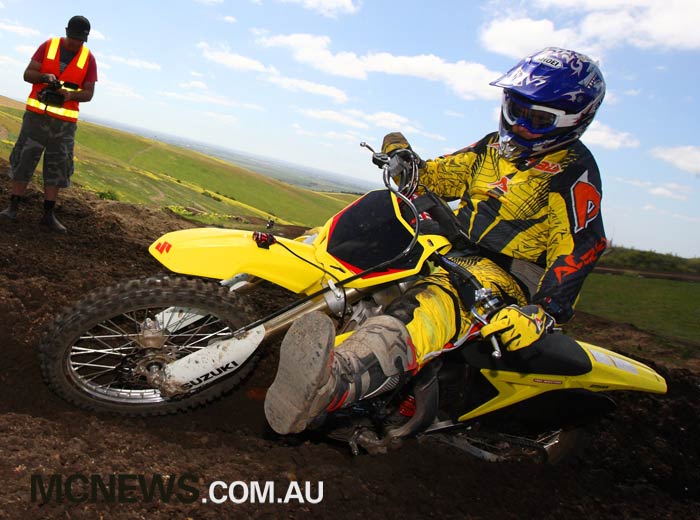 In the lunch break we were treated to a spectacle with Suzuki’s defending Australian Pro-Lites Motocross Champ Matt Moss doing some laps on both the RM-Z250 and RM-Z450. I immediately grabbed a yellow vest and wandered out on to the track to have a look at how the standard bike responded to a Pro’s abuse. It was an impressive sight and I reckon if he was running his red number one plates on this machine you wouldn’t be mistaken in thinking he was on his own race bike. He seems to click with this bike and I wouldn’t like to be his competition in the Pro-Lites class this year. It was inspiring stuff and it made me even keener to get back out on the 250 after lunch.

The chassis on the RM-Z250 L0 has also come in for some treatment. More rigidity and lighter weight the key features. Suzuki achieved this by making the lower frame tube rails thicker and the side rails slightly shallower. The swingarm also has a revised centre brace to help improve the overall rigidity.

In the back section at Barrabool there is a fast hard packed up hill right hander, through here I was surprised at just how easily I was able to either hold a line or a change line if I needed to.

Once again the traction and feel from throttle to rear wheel in the section was second to none. The more throttle you dial in the more the RM-Z250 just seems to squat and drive. I was actually finding that I was short shifting in some spots like you would on a 450, it had the power to handle it with ease.

Suzuki claim the engine revs to 13,500 rpm. They do seem to rev hard although I felt that the power dropped off a little when it was high in the rev range. As a result I was shifting well before the limiter cut in. On the upside this always allowed me to hold onto a gear between corners if I needed too with a generous cushion of over-rev.

Foot pegs are nice, wide and offer good grip, although my Tech 10’s soles probably didn’t enjoy them that much.

Clearance seems good and this was tested to the max in the tight deep rutted left hander. I had no trouble or discomfort in getting my leg up high enough to stop it getting snapped off. The first lap after lunch I thought I was going to get lost in this rut! In general ruts and I don’t often seem to get on that well, probably due to my dirt track and Road race background, but the RM-Z250 L0 didn’t seem to have any problem in getting in and out of them.

In summary I can say that I think we will see yellow at the front end of races for the foreseeable future. The bike definitely has the horsepower and coupled with the tractability that the injection and suspension provide, it is going to be a winner. 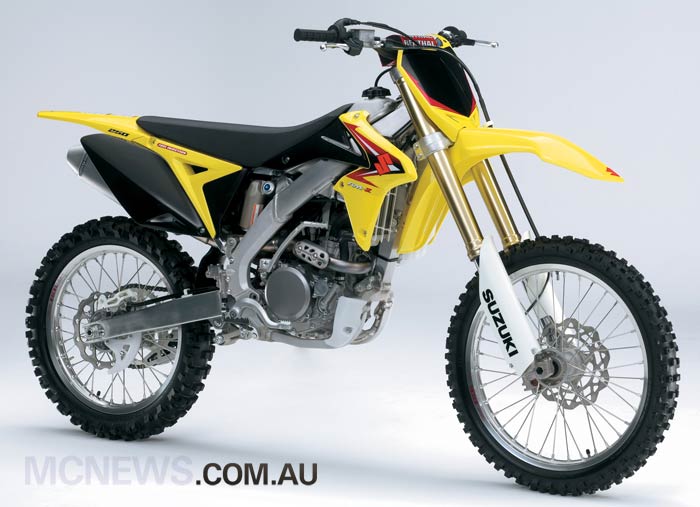