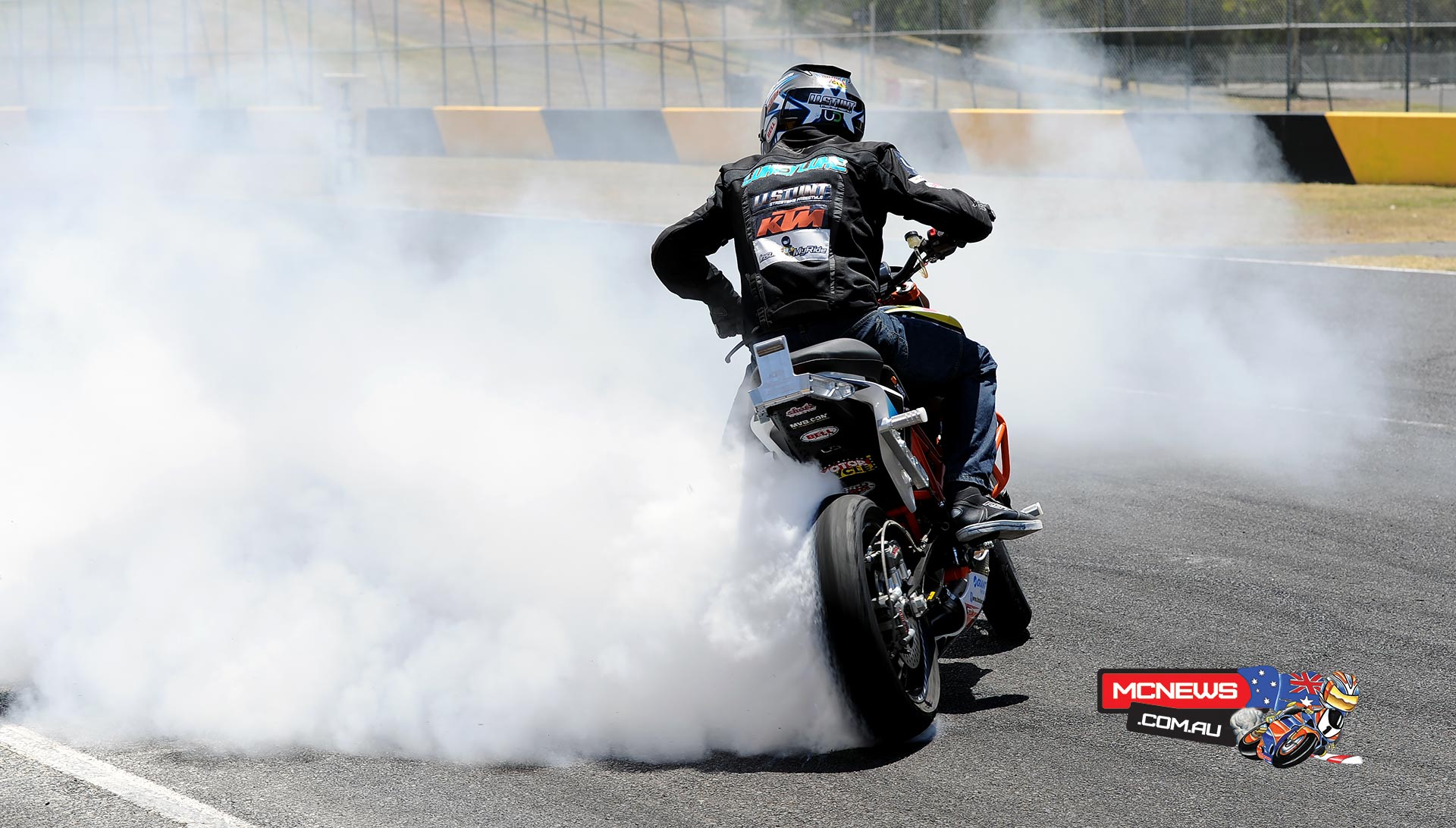 Maxwell posted an eighth, fifth and fifth from his three races to finish the year seven points ahead of experienced teammate Jamie Stauffer.

Stauffer had been thrust back into championship calculations when he won the opening race of the day, however he had to settle for second place overall.

Troy Herfoss made it a Team Honda Racing trifecta finishing the championship in third place.

Off the line in race one it was Stauffer, Cru Halliday (YRT), Mike Jones (Crazy Dog Kawasaki), and Glenn Allerton (NextGen Motorsports) leading the way into the opening corner.

Maxwell moved his way up into third position early, and by the end of the opening lap it was Stauffer leading the way from Maxwell, Josh Hook (Team Honda Racing), Halliday and Herfoss.

On the second lap the series went to a whole new level of interesting as championship leader Maxwell came off the track and re-entered back in 16th spot.

Hook was looking the goods and applying serious pressure on Stauffer posting a sizzling lap on the third lap of the race of 1:31.135.

However, Hook was given a jump-start penalty for starting the race in the wrong grid position, changing the state of play with the race standings.

Behind Stauffer and Hook, Herfoss was riding smart and was clear in third at the halfway mark of the race.

Allerton was behind him in fourth, while Beau Beaton (Racers Edge Performance) took his Ducati into fifth.

On the fifth lap Hook moved past Stauffer and into the lead, while Maxwell slowly worked his way up the field to get himself into 12th spot with only two laps remaining.

Jones worked his way into fifth spot ahead of the final lap, while Maxwell continued his climb – getting himself into ninth with just the final lap to go.

At the chequered flag it was Hook in front and the young rider was ecstatic until he learned of his penalty when he returned to the pits.

It pushed him back into ninth overall allowing Stauffer to take the race win from Herfoss, with Allerton rounding out the podium placings in third.

The result meant that Stauffer was only nine points behind Maxwell in the championship battle.

Off the line Stauffer appeared to be a man on a mission as he shot to an early race lead from Herfoss, Halliday and Hook.

It was an incredible start from Hook coming off ninth into the grid and working himself into podium contention early.

Maxwell settled back into seventh place and tongues were already wagging talking of what this could mean in the overall series standings.

But there was still a whole race of action to be run, and while Stauffer held onto his lead in the opening laps, less than a second separated him from sixth position.

Jones was again on a mission, and like he did in the opening race, worked his way up into the top five – claiming fourth spot from Hook after three laps.

At that point Stauffer was passed by Herfoss and Halliday, and relegated back to third, while Maxwell in seventh was 1.244 seconds off the lead.

There were plenty of changes in the top positions throughout the race, and lap seven saw the action heat up.

Herfoss and Halliday swapped positions four times on the lap, and Jones also had his time briefly at the front of the field.

While the trio were fighting up front, Stauffer dropped back to fifth, and found himself in a tight battle of his own with Allerton.

When Allerton moved up into third on the penultimate lap, the four Hondas were back in fourth to seventh spot, as Jones fizzed passed Halliday into the lead down the straight heading into the last lap.

It was a perfectly timed move by Jones, and he went on to hold his nerve and win the race in emphatic style, while Allerton calculated his move superbly to finish the race in second.

Herfoss took advantage of a momentary lapse in concentration from Halliday, and passed the Yamaha rider to take third.

Maxwell earned important points finishing in fifth, while teammate Hook did him a favour by just edging out Stauffer on the line to claim sixth.

From the outset of the final race, Maxwell only needed to finish seventh or better to take out the championship crown.

As they set off it was again Stauffer who rode into the lead at the opening turn, and he was followed by Hook, Herfoss, Halliday and Allerton while Maxwell settled into sixth spot.

Halliday dropped right off the pace on the second lap, which effectively bumped Maxwell into fifth spot – simply needed to hold his nerve and get through the race unscathed to come up trumps.

Up front Stauffer continued to lead though the gap between himself Herfoss in third was less than half a second.

At the mid-point of the race positions remained the same before Hook and then Herfoss both made their ways past Stauffer.

It effectively ended Stauffer’s championship hopes and Maxwell was given the message from his crew that Stauffer was back in third.

It didn’t hold the champion in waiting back, and he worked hard to get past Allerton with two laps to go before Allerton pushed back past him heading into the final lap.

Hook held his nerve to take the race win ahead of Herfoss, with Stauffer finishing third, Allerton in fourth and Maxwell in fifth.

The result handed Maxwell a seven-point championship win from Stauffer, with Herfoss making it a Team Honda trifecta on the final podium.