All riders suffered from rear grip issues after only five laps of the 15-lap race distance this morning. Particularly the Yamaha riders due to their lack of pre-season development on the all-new YZF-R1M, but everyone was suffering to some degree.

With hotter afternoon temperatures it seemed likely that tyre wear might even be more of an issue in the afternoon bout.

The field got away cleanly from the line and Troy Herfoss declared his intentions by taking the early lead ahead of new teammate and race one victor Aiden Wagner while Sean Condon, Wayne Maxwell, Glenn Allerton and Cru Halliday gave chase.

Wagner challenged Herfoss into turn one as they started lap two of the 15-lap race but the Goulburn rider hung on to the lead through to the first split. A 1m37.1 from a standing start for both Team Honda riders.

Cru Halliday was extremely strong in the opening half of the first bout this morning and was the fastest rider on lap two, passing Glenn Allerton and closing onto the back of Wayne Maxwell to challenge for fourth place.  Sean Condon was running strongly in third place, shadowing the Team Honda men.

Condon then went under Wagner for second place as they tipped into turn one with 12 laps remaining but Wagner got him back as they started to negotiate the back section of the circuit while Wayne Maxwell, Cru Halliday and Glenn Allerton looked to join the party.

On the next lap Wagner took Herfoss at turn one for the race lead and managed to gain a couple of bike lengths over Herfoss around the back section of the Eastern Creek layout. The pace of the leading trio droppd into the 1m31s for the first time in this race, Wagner the fastest at this point of the race with a 1m31.62, but still a full second slower than what he managed in race one.

Cru Halliday was continuing his steady march forward, stealing fourth from Wayne Maxwell and setting a new fastest lap of the race with nine to go. Only half-a-second now separated the top four and the battle between the leading trio playing into the hands of Halliday, the 26-year-old perhaps pacing himself a little more in this second bout after going hard from the start in the morning bout.

Wayne Maxwell did not want to see Cru slip away from him, the reigning champion putting in his fastest lap of the race the next time around to close the gap back down to his teammate and join the leading group, now the top five were covered by half-a- second.

At the front Herfoss was back in the lead ahead of Wagner and Condon, but you could throw a bike cover over the leading trio with seven laps to run. Halliday and Maxwell only a couple of bike lengths behind and the top four all running 1m31s.

Maxwell got the better of Halliday late on lap eight but positions were being jostled across the top five positions as things were so close.

Tipping into turn one the next time around Condon thought about slipping up the inside of both Wagner and Herfoss! I think everyone was glad he thought better of it as things were way too close for comfort.

With four laps to run Condon nosed ahead of the Honda duo for the first time. The Kawasaki rider maintained the lead for the remainder of that lap and the entire next two laps before Herfoss slipped past him early on the last lap and went on to win the race by a miniscule 0.029 of a second at the chequered flag.  Aiden Wagner three-tenths behind rounding out the podium while Wayne Maxwell was again the top finishing Yamaha in fourth and Halliday fifth.

Glenn Allerton was a couple of seconds closer to his teammate in this second but clearly Allerton has some work to do in trying to gel with the new R1.

Linden Magee survived a near disaster when he ran off the circuit and narrowly missed the tyre barrier at speed between turns three and four but recovered to bring home the Fireblade SP in ninth place ahead of Ben Burke.

Only half-a-second covered the top five after the 15-lap, 67.5km race distance in what was a thrilling encounter that sets us up well for tomorrow’s action, which of course will be shown via a live videostream right here on MCNews.com.au.

Troy Herfoss wins the opening Saturday round courtesy of that race two win, with both Team Honda riders earning 45-points from the first day of FX-ASC competition for 2015.

The action continues tomorrow when the premier day of FX-ASC competition gets underway at Sydney Motorsports Park.

2015 FX-ASC Round One Image Gallery A

2015 FX-ASC Round One Image Gallery B 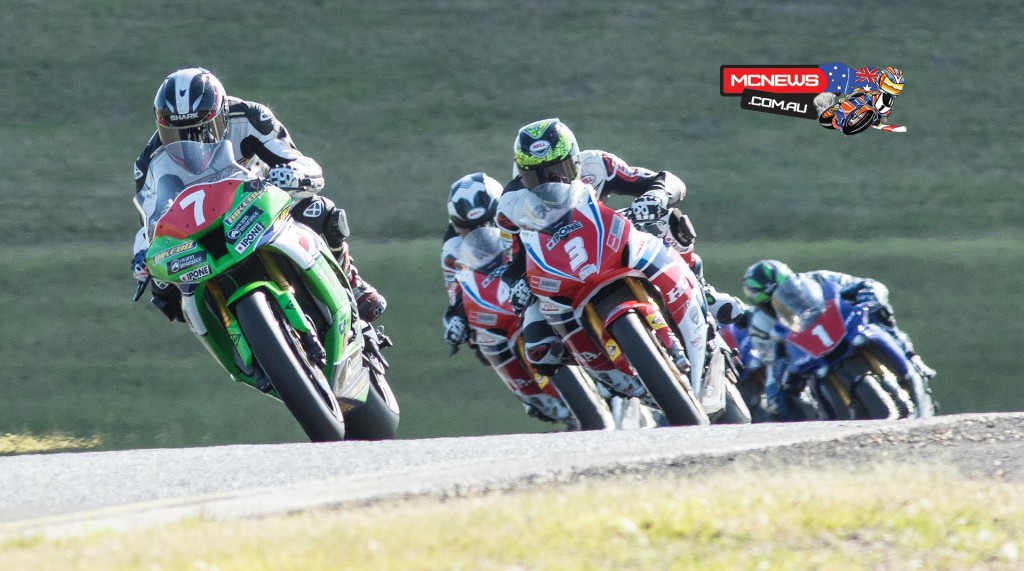