by Trev
in Formula Xtreme, Motorcycle News, Motorcycle Racing
A A
Share on FacebookShare on TwitterShare

Despite the best efforts of a very determined Troy Herfoss, defending champion Wayne Maxwell had taken two wins on the YRT machine, the question that remained was, who had the most rear tyre left for the 12-lap final race distance?

The Swann FX Ipone Superbikes rocketed off the line towards turn one at 1505 this afternoon on their way to displaying that answer.

It was Troy Herfoss that once again led the field around the opening lap with Wayne Maxwell right by his side as Glenn Allerton and a resurgent Jamie Stauffer gave chase and tried valiantly to this time around not get that leading duo break away from them.

With the ambient temperature nudging towards 30-degrees celsius and a track temperature now hovering around 40-degrees this race was always going to come down to had the most rear tyre left at the end of the 12-lap race distance.

Wayne Maxwell took the lead from Herfoss three laps into the race but the fastest man on the circuit was Mike Jones. The Kawasaki rider had moved past Jamie Stauffer to claim fourth place and by lap four was challenging Glenn Allerton for third. Only 7-tenths covered that leading quartet as they commenced lap five.

As the race broached the halfway mark Maxwell had built a commanding nine-tenths of a second and looked to have broken Herfoss’ challenge. The tyre wear question seemingly answered when Maxwell dipped into the 1m22s on lap seven, the only rider to do so in this final race.

Troublingly, for series leader Herfoss, the Honda man started to come under a two-pronged attack from Glenn Allerton and Mike Jones. The Kawasaki rider making forwards thrusts towards Allerton at almost every turn, and Allerton doing the same to Herfoss, nothing separated that trio as they tussled over second place. Up front, Maxwell had gone, his lead out to over 2.6-seconds with three laps to run.

Glenn Allerton and Mike Jones both went under Herfoss with two laps to run, pushing the Honda man back to fourth place. Half a lap later Herfoss squeezed back past Jones, the Kawasaki man came back at him into turn one as they started last lap but Herfoss held him out. That tussle however had let Allerton break away from them.  Jones had another go at the final left hander but Herfoss again managed to hold sway to claim that third place.

The scene is set for another titanic showdown tomorrow with another three 12-lap races. Wayne Maxwell is confident. Troy Herfoss is frustrated, the 28-year-old is riding that Fireblade SP brilliantly but needs to find something for tomorrow if he is to prevent his 16-point lead in the Swann Australasian Superbike Championship being whittled away by defending champion Wayne Maxwell. 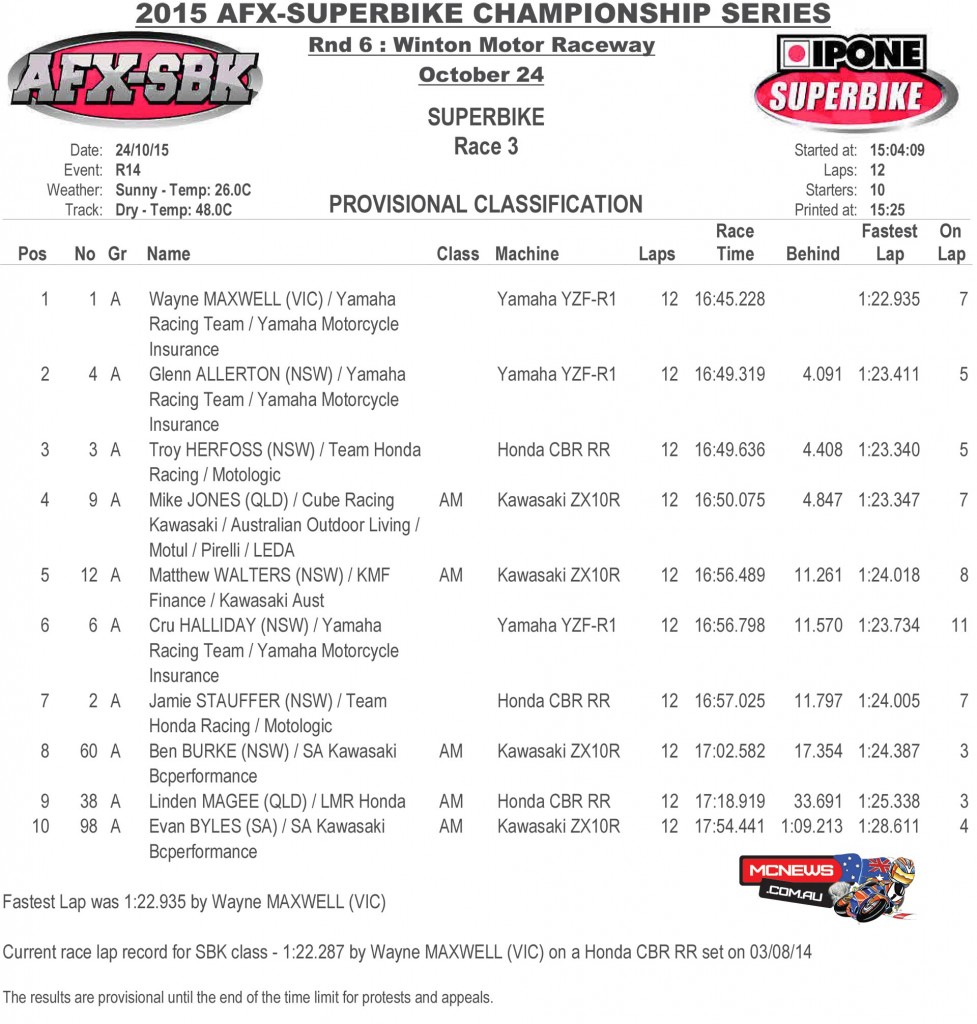 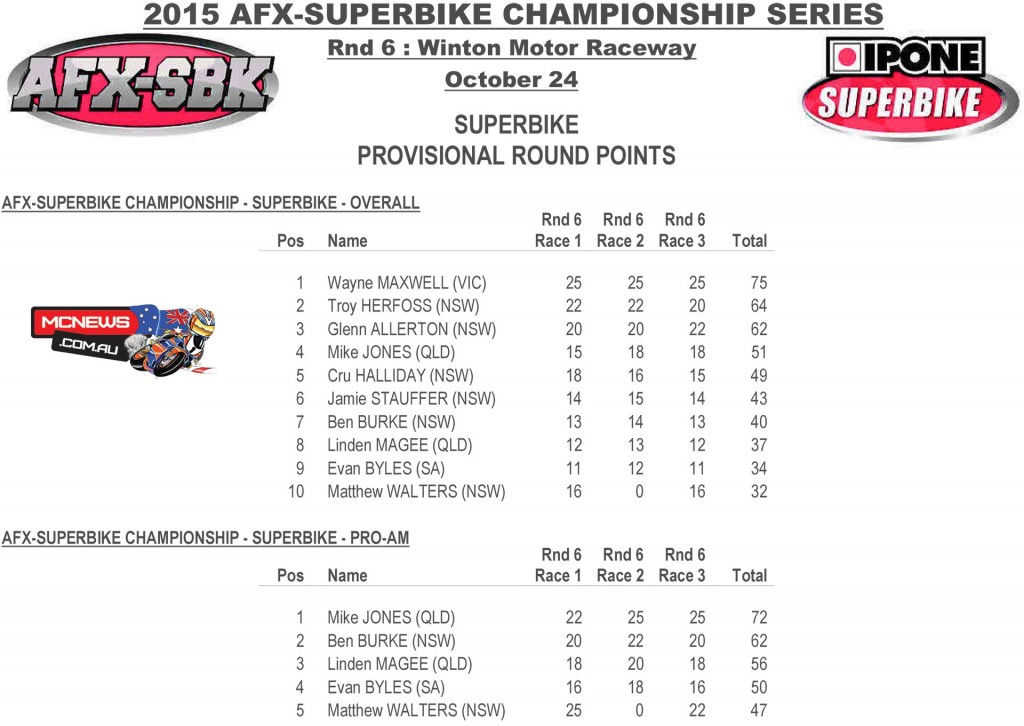 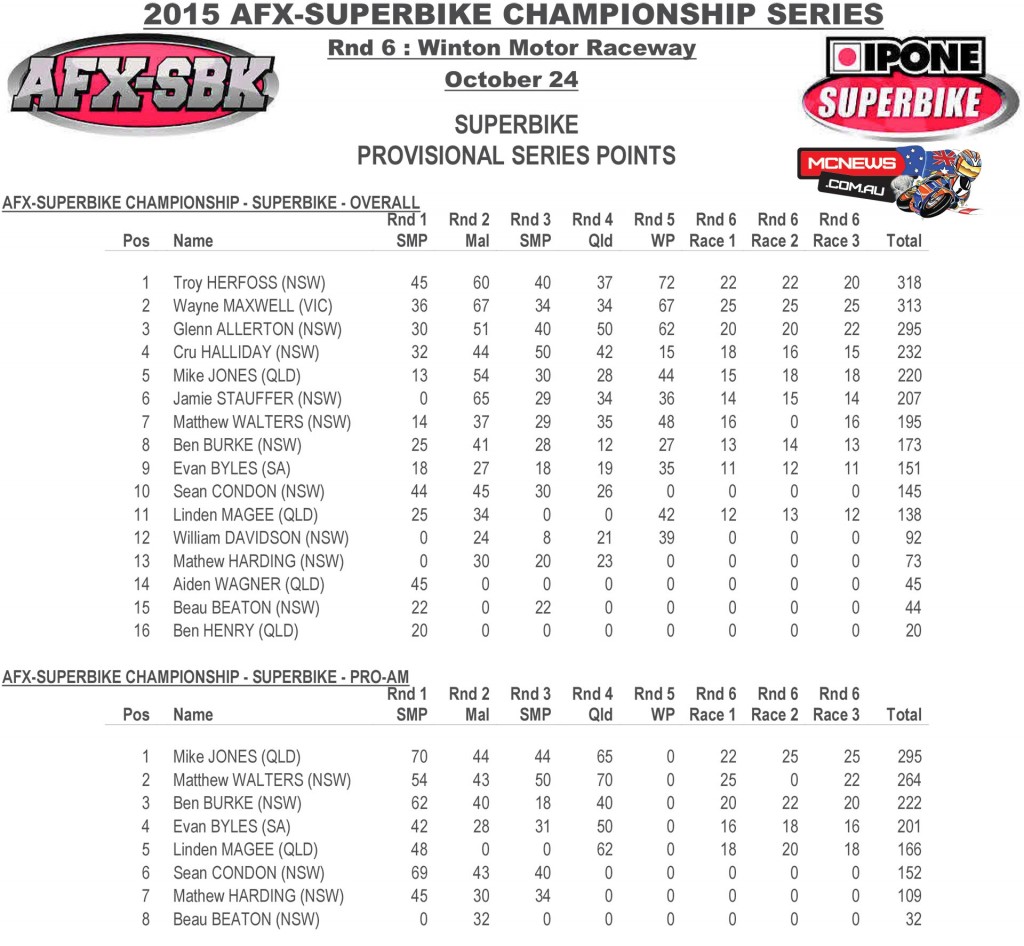