►The first race was held on December 3, 2004, and Ricky Carmichael won on a Suzuki

►Toronto is the only international stop on the circuit

►Honda and KTM are winless in Toronto, can Ken Roczen, Ryan Dungey or Justin Barcia change this?

►En route to his third consecutive title, Villopoto scored his fourth win of the season at Toronto last year

►Andrew Short earned back-to-back top-five finishes with a fourth; it was his best finish of the season and second top five of the season.

► Barcia earned a fifth place finish; it was his fifth top five finish of the season

►Broc Tickle kept his top-10 streak alive with a sixth place; he has six-straight top 10 finishes

►Josh Hill tied his season-best finish of the season with an eighth place; he has four top-10 finishes

►Justin Brayton kept his season-long top-10 streak alive with a ninth place finish. Along with Villopoto and Short, these guys are the only riders that have finished within then top 10 at every race.

► Villopoto earned his seventh podium of the season with a second place finish;  It was his 11th top- five finish

►Dungey has 54 podium finishes in the 450SX Class

► Stewart earned his third win of the season; it was his 48th 450SX Class victory of his career

►Stewart is now tied with Carmichael for second on the all-time 450SX Class win list; it was also his 95th career AMA victory

►Dean Wilson, who grew up racing in Canada, won this race in 2011 on a Kawasaki

►Since 2009, the winner of the 250SX Class in Toronto has gone on to win the title twice

►Kyle Cunningham earned his first top-five finish of the season with a fourth; it was his first top five since Las Vegas as last season

►Cianciarulo earned his third career 250SX Class win of the season; has been in the top two every race this season

►Monster Energy/Pro Circuit/Kawasaki Pro-Circuit Kawasaki has had two bikes on the podium in every race in the Eastern Regional 250SX Class this season, and at two of these races, the team earned podium sweeps

►For the first time this season, a non-Monster Energy/Pro Circuit/Kawasaki rider has finished inside the top two: Justin Bogle of GEICO Honda earned his third podium of the season, marking the best finish of his career

►Blake Baggett earned his third podium of the season with a third; he has a top five in every race this season

►Ernesto Fonseca is the winningest rookie in 250SX Class history; en route to winning the 1998 championship, he won four races and a second plaice, giving him a 1.20 average finish

►With an average 1.40 finish, Cianciarulo had three wins and two second-place finishes 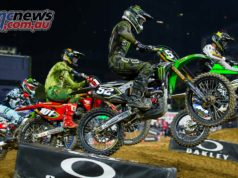 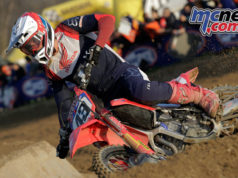 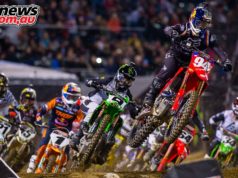