The 20th International Phillip Island Classic was a tale of two sides of the pits for the TBR / D&D Suzuki Katana machines of Steve Martin and Shawn Giles.

Whilst Steve seemed to have nothing but bad luck from Friday onwards, Shawn could not put a foot wrong and won the International Challenge with three wins and a third place.

Steve’s weekend started well enough on Thursday practice but ended the day with clutch trouble, like so many others on the weekend.

By the end of Saturday, with two DNFs, there was one motor with a cracked case, another with a broken crank, and a third with gearbox troubles and a mysterious lock-up from second qualifying. Saturday was a late night with the crew putting together a race and a spare motor from all the bits – whilst riders attended the dinner with Ago.

Sunday racing was better with a 9th in race 3 struggling with more gearbox issues and finally a deserved 2nd in race 4.

Steve said, “Not the best weekend for me, but I love the Phillip Island Classic and will be back next year and hope for better results. Congrats to Shawn and the team on the overall win.”

Shawn’s weekend by comparison was relatively boring for the crew. No major issues and three straight wins then a 3rd in race 4 after a poor start and a troublesome rear tyre.

Shawn said, “It was great to get back on the Suzuki Katana after the last race in March. These are very physical bikes to ride and with the new track surface the Dunlops were copping a hiding, but they held up well. Despite the poor start in the last race we managed to win overall which made up for last year.”

Trevor said, “It was a mixed event for us, great to win with Shawn but also disappointing for Steve having trouble with two our oldest engines. I guess putting together these 180hp motors with 30 year old parts you have to expect the odd problem. We’ll work on more reliability for next time, and try and make the bikes easier to ride, but they’ll never be a modern superbike and nor would be want them to be.”

The next event for the team will be the World Superbike Championship round at Phillip Island before then taking on the Barry Sheene Festival of Speed at Eastern Creek. 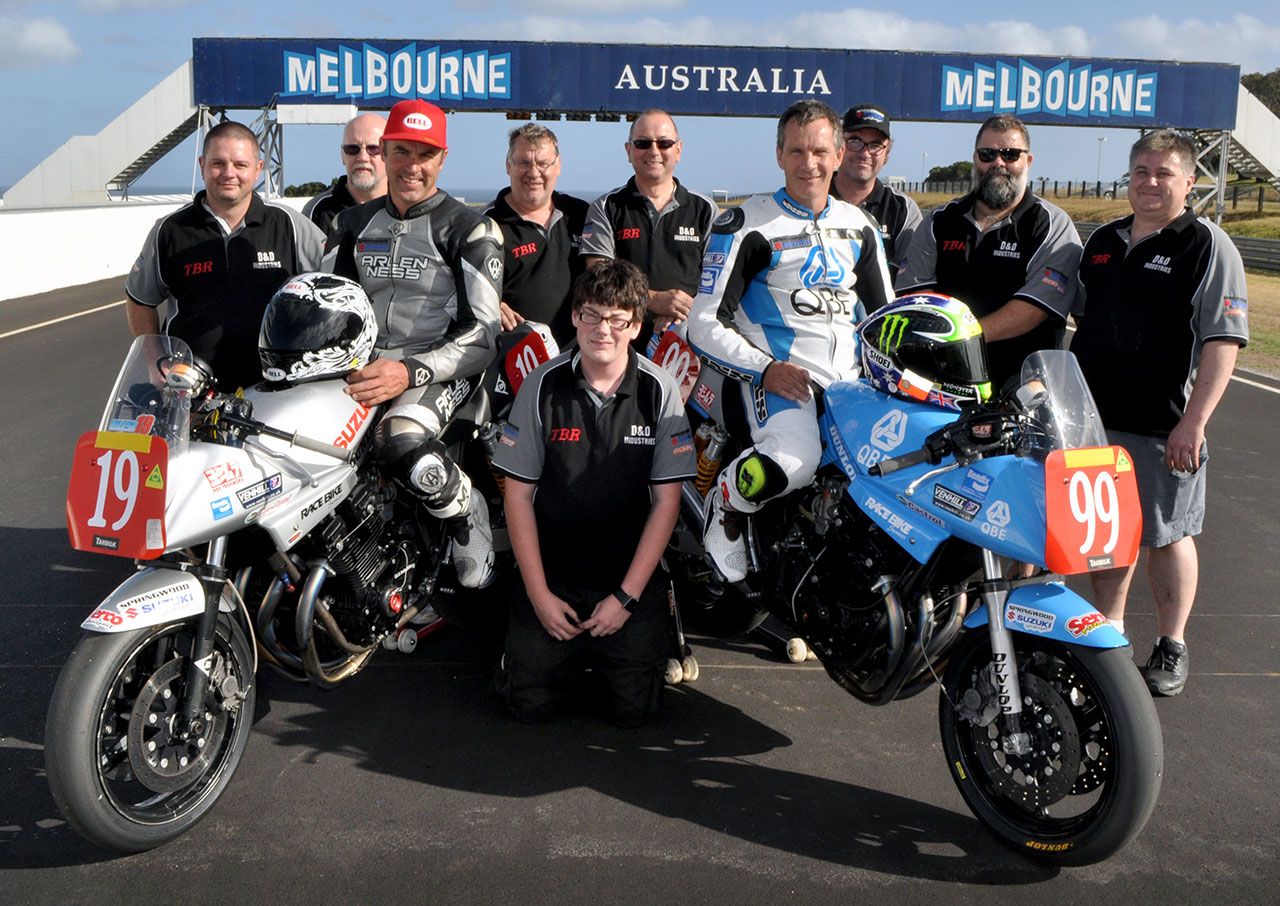 In front of road racing icon Giacomo Agostini, a slick Australian team has charged to a dominant victory in the International Challenge, the marquee event at the 2013 Australian Motorcycle News Island Classic historic meeting held this weekend, January 25-27.

The International Challenge was run at a searing pace on the freshly resurfaced Phillip Island Grand Prix circuit – borne out by a new Shawn Giles lap record — and the Aussies made their intentions clear from the outset, leaving the UK, American and New Zealand teams scrambling to stay in touch.

The supremacy continued over the final three races, with only two internationals managing to finish inside the top eight finishers across all four legs – UK pair Jeremy McWilliams and Mick Godfrey (both Harris F1).

The result continued Australia’s unbeaten run in the International Challenge, while the icing on the cake was Giles’ victory in the individual battle on his immaculately prepared Suzuki Katana 1294. But Giles had a few nervous moments getting there, reviving memories of 2012 when he was in sight of victory before a battery failure in the last race.

McWilliams went onto win in 2012, and he got close again this year as Giles’ hitherto flawless campaign began to unravel in the last race.

“I didn’t get a bad start in the last race, but when I went to change up I couldn’t get a gear – and that’s when Jeremy went past,” said Giles. “I’m like ‘oh no, selector gear, selector gear’ (problem). But I eventually got a gear and chased after Jeremy. I thought I could do it, but then the bike just started going sideways to the extent that I thought there was oil on the track.

“I had a couple of near get-offs and Jeremy went past again. I just couldn’t keep with him, and I was thrown out of the seat a few times. It was like I was dirt tracking!

“But I managed to hold on in a tough race, and full credit to my team which has put a good package together for me. Unfortunately I didn’t win the last race, but that’s racing. It’s just magic to win this event; I couldn’t be happier.”

McWilliams was generous in defeat: “Congratulations to Shawn – he rode sensibly in that last race and did what he needed to do.

“I sometimes get quite nervous in close combat on these big bikes for fear of things going wrong – dropping oil and stuff like that. But once the first race was out of the road this weekend it was completely forgotten about and it was all about riding as hard as you could. Honestly, this is the best fun you can have on a race bike.”

Agostini, the Italian 15-time world champion and special guest at the Island Classic, was impressed with what he saw.

“The event is much bigger and better than the last time I was here in 2003, and the racing has been spectacular,” said Agostini. “And of course, it’s always great to race on a brand new surface – it’s smooth and fast.”

Giles, the three-time Australian Superbike champion, breezed home in the opening International Challenge race ahead of McWilliams and Donald (Suzuki XR69), while it was a disappointing start for former world endurance champion Steve Martin (Katana 1294), who retired with mechanical problems. The pattern of discontent for Martin — who was the only rider to really push Giles in 2012 – continued for some time after that, although he did finish on a high with a second place in race four.

Australia wasn’t the only team to suffer mechanical gremlins, with top UK rider Ryan Farquhar (Harris F1) also in the doldrums for most of the three days, while McWilliams also rode a replacement bike in the last race after his own machine gave up the ghost. Australia’s Malcolm Campbell also sat out the finale with a fried clutch on his Suzuki XR69.

Giles and McWilliams also went 1-2 in races two and three, with the ultra impressive Beau Beaton slotting his Irving Vincent Black Lightning into third place on both occasions before a crash at turn 11 in race four soured his campaign.

Meanwhile, the hard-working Dibb was one of the biggest revelations for Team Australia as he powered his way to a brace of top five finishes, highlighted by an excellent fourth place in race three.

The 4.445km circuit was resurfaced last December, with the Island Classic the first major event on the new tarmac. The next big ticket item will be the opening round of the Superbike World Championship from February 22-24, in what is shaping up as the fastest local round in history.

Meanwhile, Donald was awarded the Phil Irving Memorial Trophy for the highest individual point-scorer across the weekend (in races outside of the International Challenge) after scoring 191pts in the 500cc Classic and Unlimited Classic classes on his 1962 model Manx Norton. South Australian Levi Day, who won the Irving trophy in 2012, was also mounting a strong case to retain it before he broke a chain on his Honda in the third 500cc Classic race.

Giles also received the Ken Wootton International Perpetual Trophy for his victory in the International Challenge, in memory of the late Aussie motorcycle journalist and a key driver of the Island Classic event.