The first Movistar Yamaha duel of the season saw Maverick Viñales the man to take the stunning 500th win for Yamaha after a clash of the titans at Le Mans – with the tremors from the French GP felt throughout the Championship standings.

With both Yamahas dueling on the last lap, Valentino Rossi dramatically slid out of contention from behind his teammate to lose the Championship lead – and join Repsol Honda Team’s Marc Marquez on the list of those leaving Le Mans empty handed.

The headlines came thick and fast, with Johann Zarco (Monster Yamaha Tech 3) taking the lead off Viñales off the line and the two factory Yamaha machines slotting in behind.

The Frenchman held firm at the front in style until Viñales made his move and once past, the rider from Roses pushed to make a gap and leave the Frenchman to duel it out with his teammate.

The rookie held on with some stunning pace in his home race.

As the gap finally began to grow, Rossi pulled the pin from third to overtake the Frenchman and go on the charge. The ‘Doctor’ reeled his teammate in at the front, passed him, and then looked to escape – but the two blue machines were set for a spectacular last lap duel.

It was the ‘Doctor’ ahead as that last lap dawned, before an uncharacteristic mistake let Viñales back through and the number 46 pushed hard to close back in. Close in he did, before the final stroke of drama for the day suddenly found the nine-time World Champion sliding out, watching his teammate disappear into the distance.

The Championship leader was points leader no more, with Viñales crossing the line for 25 points to overtake Rossi and gain big ground over Marquez.

Home hero Zarco kept it calm under the huge pressures of the incredible home crowd to then cross the line in second for his first ever podium – with Dani Pedrosa (Repsol Honda Team) completing the rostrum after an awesome slice through the field.

Pedrosa began the race in P13, was seventh after the first few laps and then pushed his way past Andrea Dovizioso (Ducati Team) and Cal Crutchlow (LCR Honda) to set off after the frontrunners – closing in on Marquez before watching his teammate slide out.

Pushing to close in on the podium fight, the number 93 had pushed too hard and Pedrosa, after a magnificent win in Jerez and the drama in Le Mans, is now the man second in the title standings – only 17 off Viñales’ lead.

‘DesmoDovi’ fought off Crutchlow to take fourth from the Brit and then gain a gap, with the rider from Coventry completing the top five.

Jack Miller (EG 0,0 Marc VDS) again hit his 2017 target despite a huge crash on Saturday to cross the line in the top ten in eighth, ahead of a fantastic home showing for Frenchman Loris Baz (Reale Avintia Racing) in ninth.

Andrea Iannone (Team Suzukia Ecstar) completed the top ten after a more difficult race but took good points, with Tito Rabat (EG 0,0 Marc VDS) in P11 ahead of both Red Bull KTM Factory Racing machines in the points once again.

Pol Espargaro bested the second ‘Bull’ of Bradley Smith by only half a second over the line, with the double points finish the perfect finish to a French GP that also saw the Austrian factory move through to Q2 for the first time with both riders.

The paddock now heads for Mugello, where the yellow smoke will rise at the perfect venue for Rossi to take try and take some revenge. 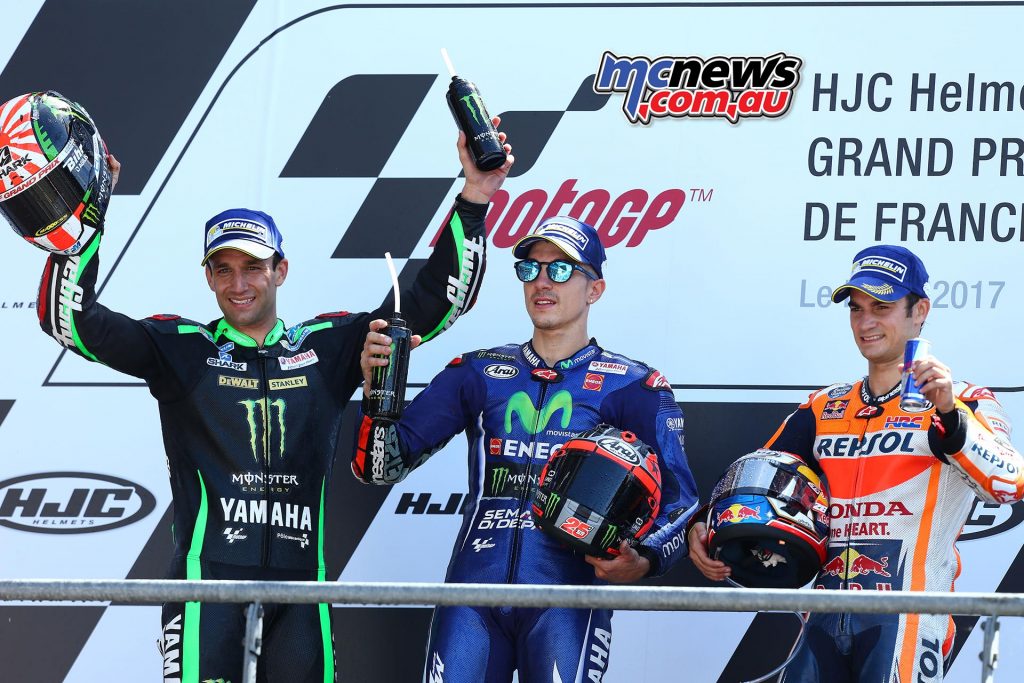 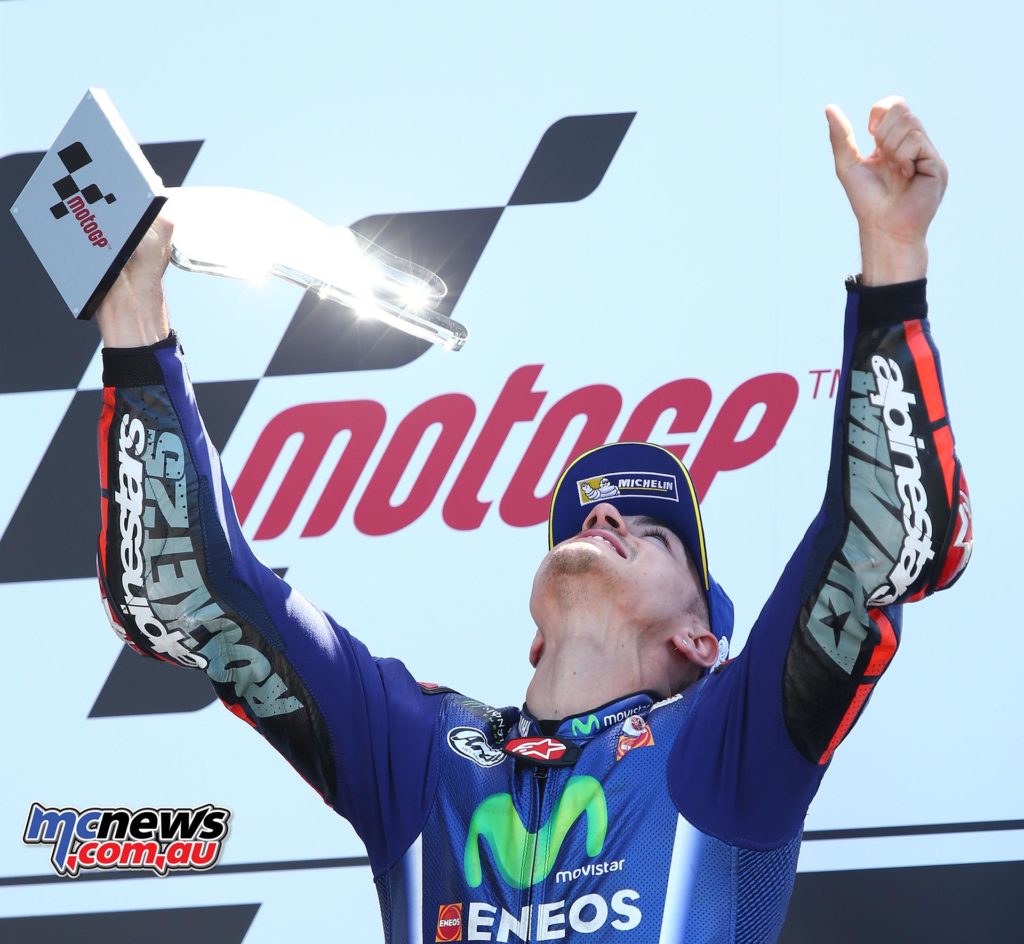 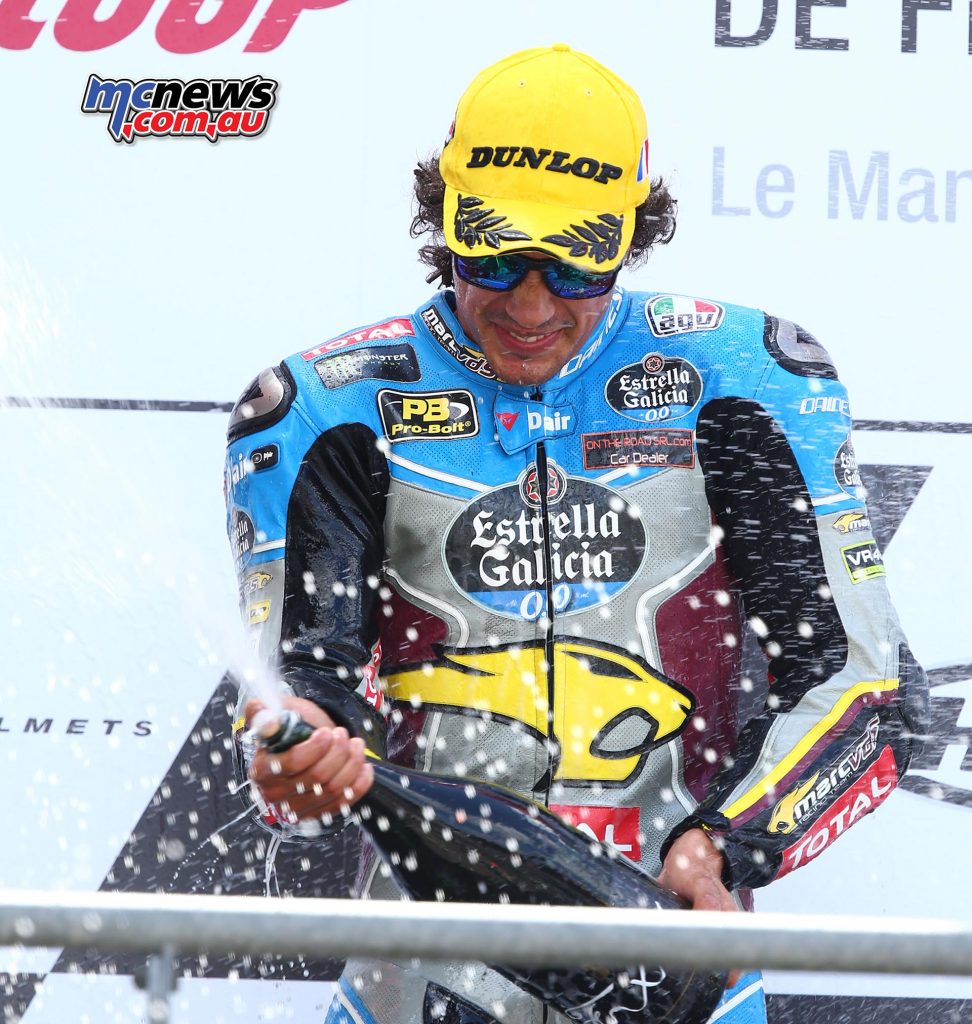 Lüthi got the best launch off the line, with Morbidelli moving up past Bagnaia as the two fought it out through the first corners and it looked like the Swiss rider could escape. An early crasher was Luca Marini (Forward Racing Team), with Alex Marquez (Estrella Galicia 0,0 Marc VDS) slotting into the chase behind the top three as another to make a good start. 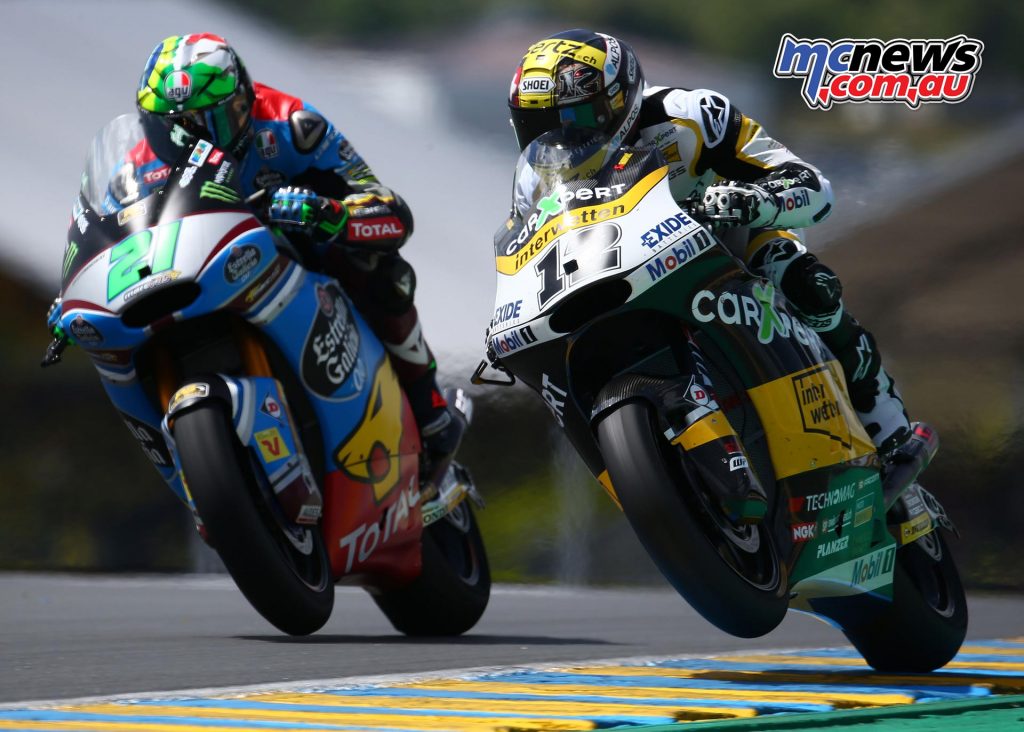 Morbidelli didn’t leave it long to pounce for the lead up front, with a stunning duel then unfolding between the Champion leader and his Swiss challenger before Lüthi ran wide as Morbidelli moved up the inside – and the number 12 found himself pushed back to fourth.

That left Bagnaia and Marquez chasing the Championship leader out front and Lüthi regrouping, with Mattia Pasini (Italtrans Racing Team) lurking in fifth.

Bagnaia held firm closely behind Morbidelli in the lead, with a small gap appearing back to Lüthi as he tried to attack Marquez – but the rider from Cervera was holding firm. With a handful of laps to go the Swiss rider made it stick, leaving Marquez to bring it home in P4 after an impressive display despite a small fracture in his foot sustained on Saturday. 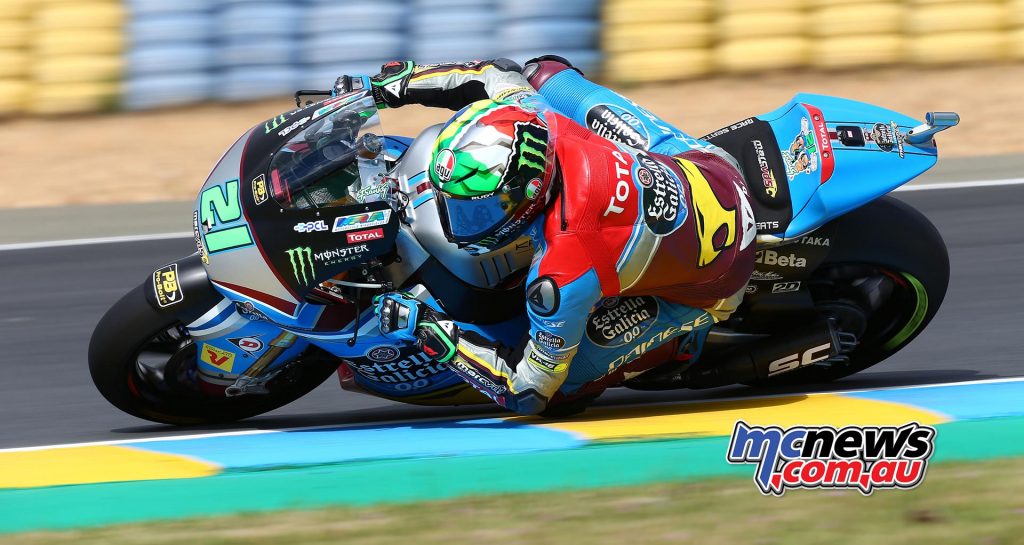 Lorenzo Baldassarri (Forward Racing Team) was a high profile crasher out of the top ten in a difficult day for the team, with Dominique Aegerter (Kiefer Racing) then left in a gap behind Pasini to fly the flag as fastest Suter once again in sixth. Takaaki Nakagami (Idemitsu Honda Team Asia) took a solid seventh ahead of Simone Corsi (Speed Up Racing) after passing the Italian late on, with Xavi Vierge (Tech 3 Racing) in ninth ahead of more good form from Yonny Hernandez (AGR Team) to complete the top ten.

Remy Gardner finished 20th, continuing to rebuild his confidence after breaking his leg at the Argentine GP several weeks ago. Starting the weekend steadily, Remy overcame the mixed conditions to eventually qualify 23rd in the sole dry qualifying session, despite a small spill in FP3.

Gaining in confidence with every lap since his return to the paddock, today’s French GP, the home event for his Tech3 squad was tough, but nevertheless the #87 Aussie gave his all, gaining several places with another impressive opening lap before battling hard to eventually claim 20th at the flag.

“This weekend was all about gaining confidence and finding the feeling again with the bike which we did with every lap.Throughout the weekend the team did a great job and I actually did better in qualifying than I thought we could. The race itself was tough and I got quite tired towards the end but I gave it everything and I am sure that in Mugello it will be an even more positive result. I had a small issue with some front end chatter which gave me some vibration entering the corners during the race, however, to finish the race inside the top twenty is confidence boosting so I am already looking forward to the next race!” 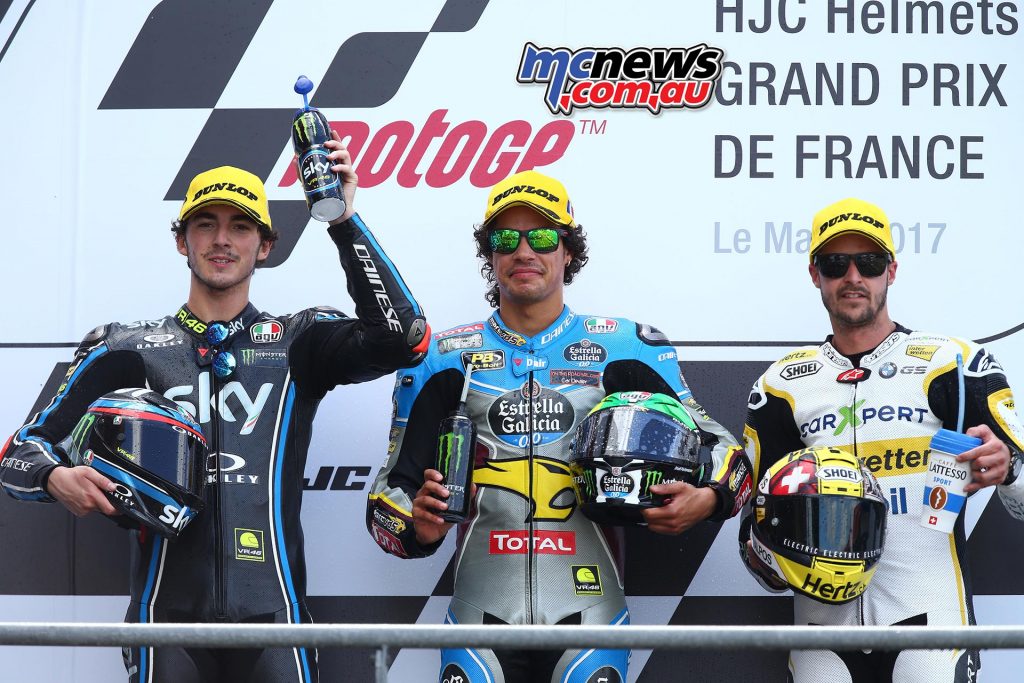 Joan Mir (SPA) wins the wackiest race of the season

Polesitter Jorge Martin (Del Conca Gresini Moto3) got a stunning launch in the original start before there was drama at the front with something down on track catching out almost half the field, creating a huge pile up into the gravel trap. The red flag came out and operation clean up began – with riders all given the ok and declared able to line up for the restart – and the grid headed back out for a shortened 16 lap race.

Off the line for the second time, Martin again got an incredible start to take off at the front, before Romano Fenati (Marinelli Rivacold Snipers) struck back to take over. The biggest loser off the line was Nicolo Bulega (Sky Racing Team VR46), who plummeted from second on the grid to outside the top twenty by the end of Lap 1.

Bulega had been one of those caught worst in the initial incident, as well as Niccolo Antonelli (Red Bull KTM Ajo), who then slid off – before a highside crash for Martin took the polesitter out of the hunt. Albert Arenas (Aspar Mahindra Moto3) then also suffered a crash, with some of those highest on the grid falling out of contention early on.

Fenati was out front trying to pull away from Championship rival Mir in second, before drama struck again and the Italian suddenly found himself sliding out at Turn 7 – leaving Mir out front and clear by over two seconds; an advantage that would only grow as the laps ticked on. 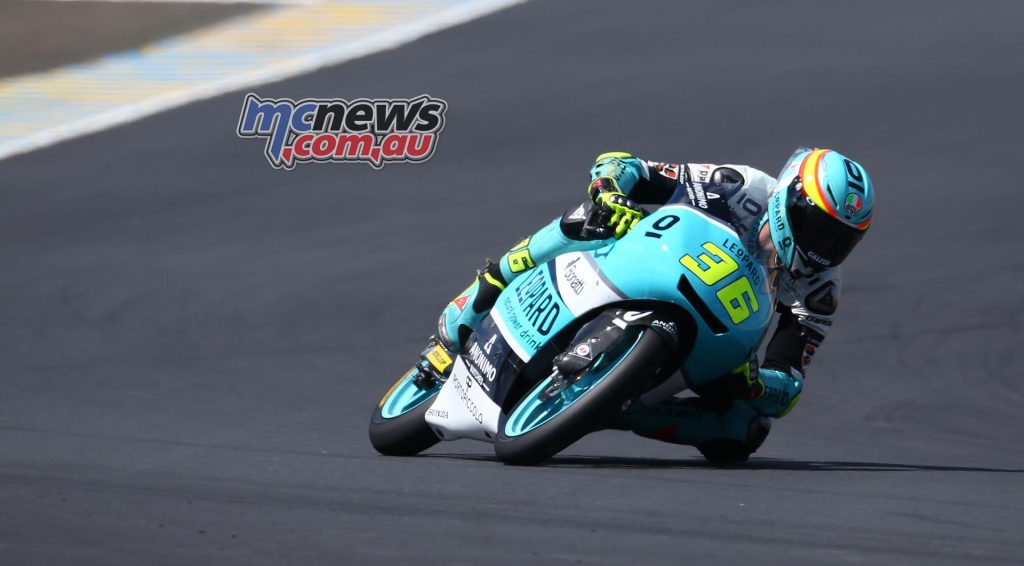 Over the line Canet moved to the front of the group to cross the line cleanly ahead of Di Giannantonio, with Ramirez taking another P4 to equal his career best from Jerez. Teammate Darryn Binder crashed out late on – but again showed impressive pace in an impressive race for the team.

Guevara took a career best in p5, ahead of a solid finish for Bastianini and an incredible showing at home for Frenchman Jules Danilo in seventh. Migno took eighth and Bo Bendsneyder beat wildcard new teammate Danny Kent to ninth, with the 2015 Moto3 World Champion completing the top ten.

Kornfeil took a solid points finish for the Peugeot MC Saxoprint squad in P11, ahead of an impressive comeback for BTT rider McPhee from outside the top twenty on the grid. Nakarin Atiratphuvapat (Honda Team Asia) scored his first points in P13, as Lorenzo Dalla Porta (Aspar Mahindra Moto3) and Marco Bezzecchi (CIP) completed the top fifteen. 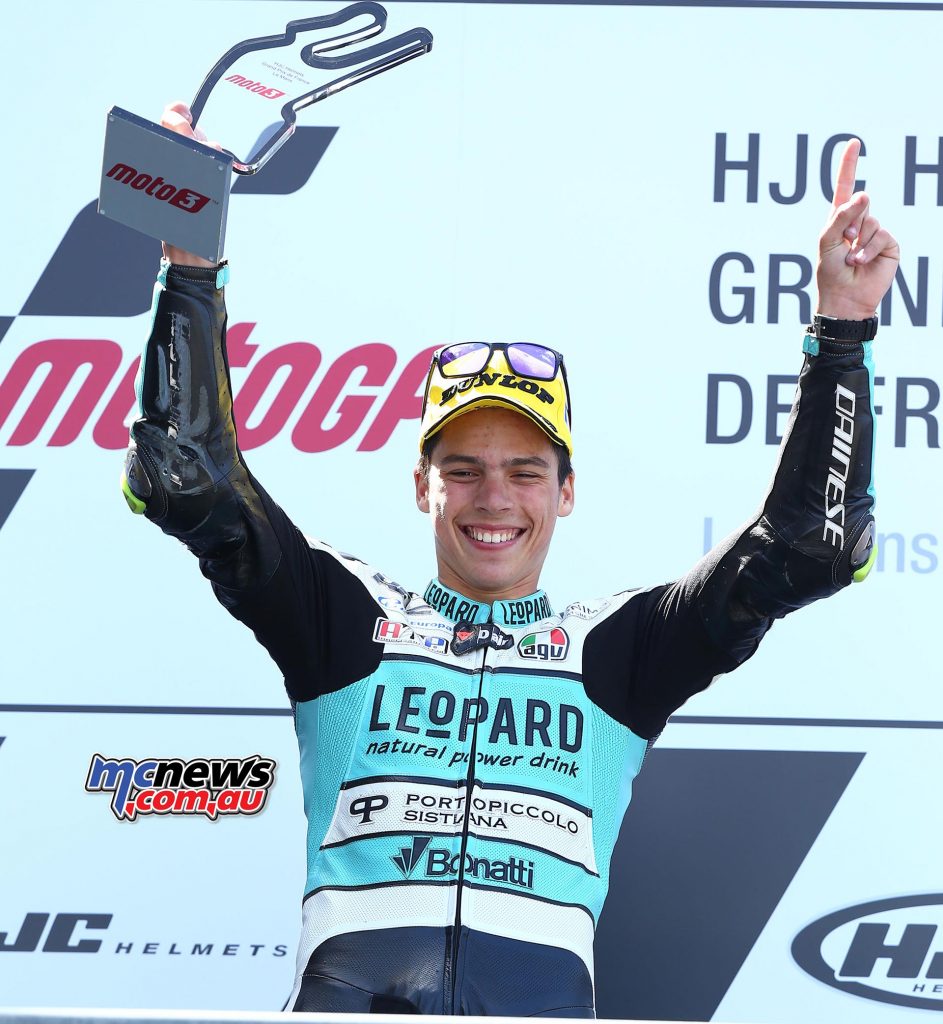 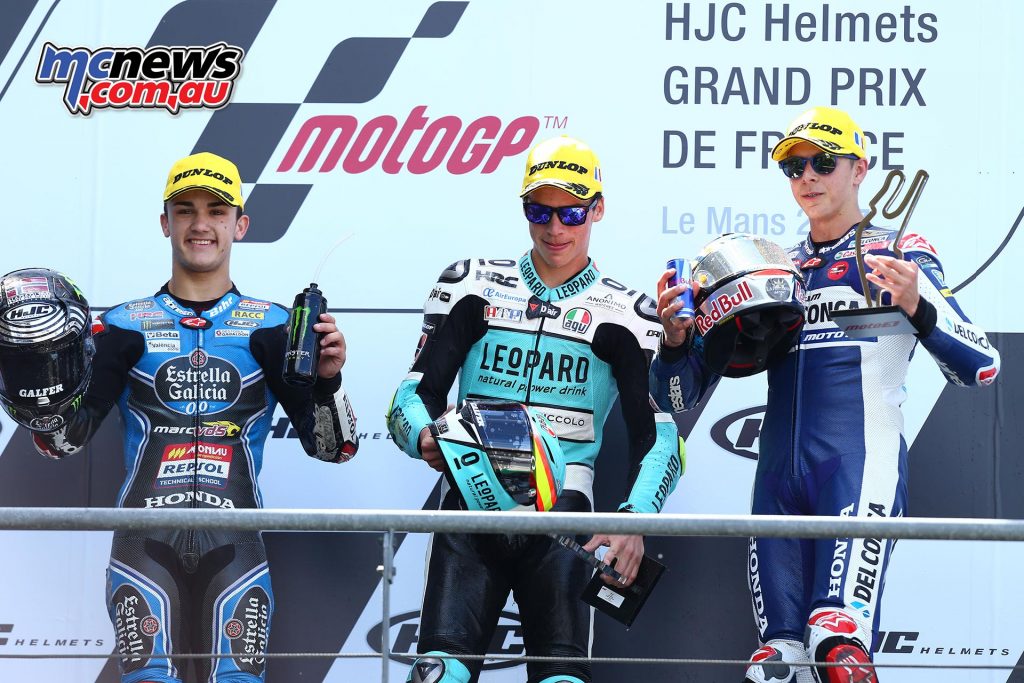 Yamaha step back in time after 500th Grand Prix victory