The cat and mouse game have continued here this afternoon at Wakefield Park. Riders fighting for some clear track, top riders setting out to sit behind a competitor, not so much to try and set a fast lap time, but just trying to mess with their heads, annoy them, psych them out.

Make no mistake, there is plenty of psychological warfare going on here, it’s not just about twisting the throttle…

Brayden Elliott fell at turn four early in the session but privateer Suzuki rider Jason Ivkovic suffered a hefty tumble 10 minutes into the session, causing a red flag delay. Anthony West had slotted up the inside the South Australian on change of direction, Ivkovic came off second best. Westy also took the grass but remained upright and rejoined the circuit. Ikvovic’s GSX-R was going nowhere, and he remained stranded with his machine for the last laps of the session. Westy also had his dramas in the closing stages of the session, coasting to a halt in the infield with a technical failure.

Herfoss was the only man in the 57s in the second qualifier. The Yamaha trio did not go out until the second half of the session, after the red flag stoppage. While they looked to be riding hard, I am not sure they were trying for an outright lap time, perhaps just keeping an eye on their pit-board just to make sure, they were remaining in the top six from their QP1 time earlier in the day, and the other eye kept on the Honda boys, Allerton and Maxwell looked to be purposefully staying in close formation with Herfoss, either ahead or behind…

Maxwell remained the fastest man thus far from his morning time, in fact the only top runner to improve on their morning time was Mike Jones on the Desmosport Ducati 1199 Panigale R. The Queenslander second quickest in the session, his 58.191 improving his stakes on combined times by one position, pushing Halliday back to sixth.

Thus the Superpole session this afternoon will be fought out between Maxwell, Herfoss, Allerton, West, Jones and Halliday.

Falzon recovered well from his crash in QP1, and failure to set a competitive time, to bounce back to seventh on combined times, despite an excursion on the grass.

Superpole is scheduled to take place at 1525. 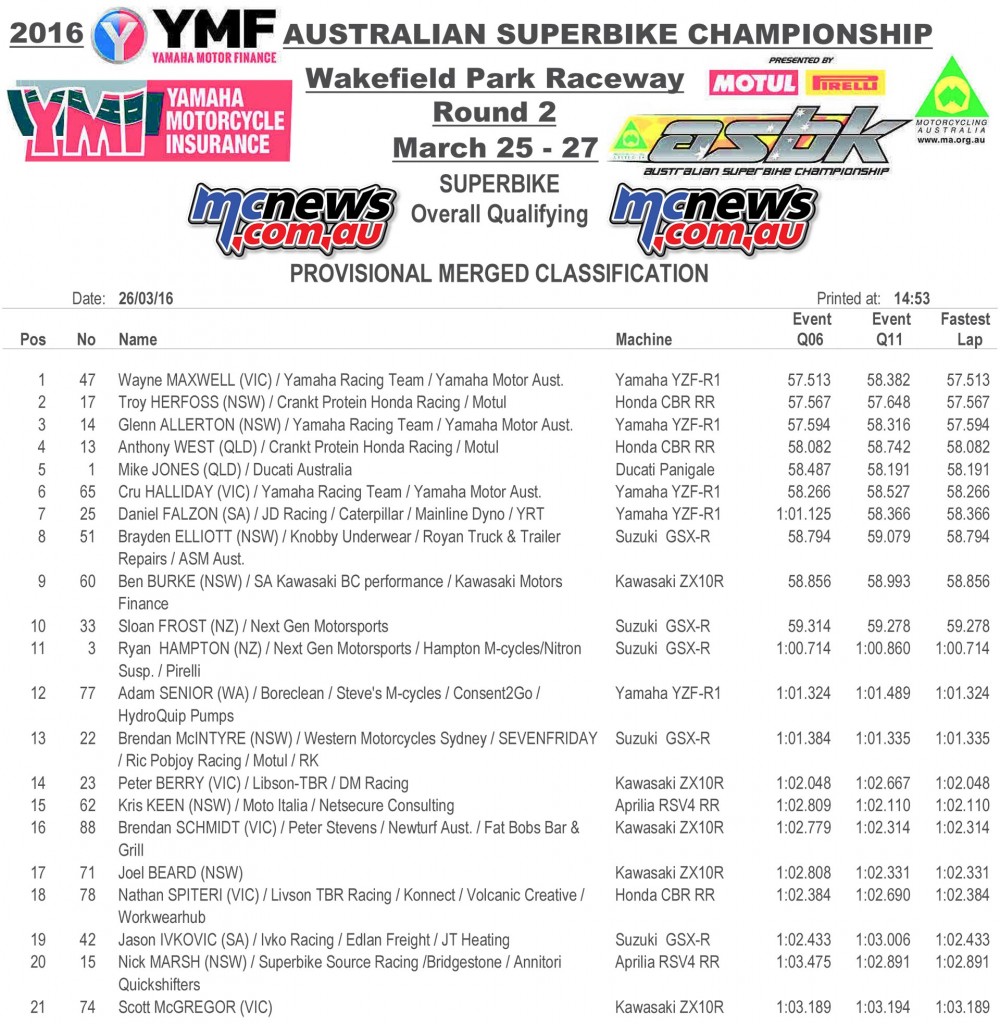