Track temperatures were warmer for this morning’s opening Superbike bout at Winton Motor Raceway. Tyre longevity absolutely critical here, despite the relatively short 16-lap, 48km race distance, tyre wear has been quite dramatic. The changes of surface in a couple of sections also see the bikes spin up rapidly, but from talking to riders in the pits, the slightly warmer temperatures may aid tyre life today.

Wayne Maxwell set the fastest ever motorcycle lap of Winton yesterday to take pole position from Troy Herfoss and Josh Waters. Daniel Falzon headed row two from Cru Halliday and Bryan Staring. Halliday the only one of those top six running Dunlop rubber this weekend. Josh Hook was also somewhat of a wildcard, the Taree youngster had been adapting the Racer’s Edge Ducati Panigale R, and was picking up his pace yesterday to qualify ninth. The fact that Hook was running Bridgestone rubber also throwing in another interesting ingredient in to the mix, where tyre life management is going to decide who finishes where…

Cru Halliday got a flyer of a start but the Crankt Protein Honda slotted passed both Halliday and Maxwell in the entry to turn one.  As we have seen so many times at Winton however, a crash at turn one on the opening lap brought the red flag out. Mitch Levy, Matt Walters and Jack Baker all caught up the incident. Baker was injured in the incident and taken care of by the RaceSafe crew.

The re-start got underway at 1142 and Falzon and Staring brushed shoulders into turn one but out the other side it was Herfoss the early leader from Maxwell, as Staring and Falzon gave chase. Josh Waters did not get a great run off the line and was in sixth place just behind Cru Halliday as they negotiated lap one.

Falzon took Staring late on lap one to move up to third place but the two fastest men on the opening lap was Herfoss and Maxwell, a 26.18 to Herfoss and 26.77 for Maxwell from a standing start.

Maxwell closed that gap down to Herfoss through turns four and five but Herfoss reclaimed some of that ground around the tight back section. Alex Phillis was running in a strong seventh place but a 10-second  jump-start penalty was then awarded to the Apex Civil Yamaha man, ruining his chances of a top ten result on debut with the new team.

The leading trio continued to set the pace, Falzon the quickest of the triumvirate Falzon, but only marginally. All of them under the existing race lap record.

Maxwell looked to have the pace to put a challenge on Herfoss at any point he chose, but appeared to be biding his time, he best not bide it too long or Falzon will gazump him before he knows it. Maxwell also certainly has front of mind his tyre life over the shortened 15-lap race distance, reduced by a lap after the turn one incident at the first attempt at running the race. 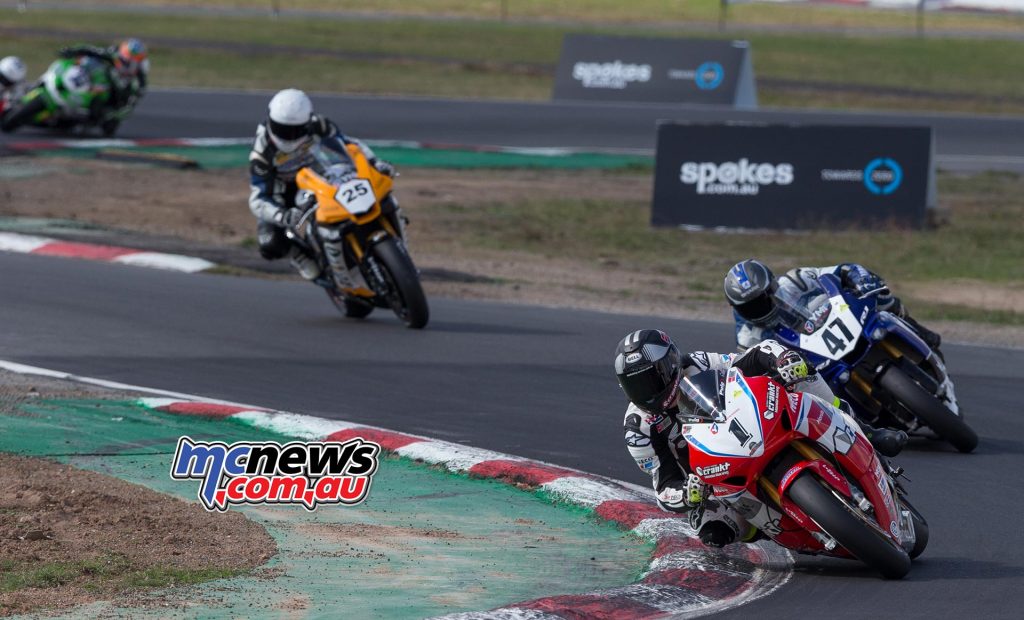 It had looked as though Staring could not maintain the pace of the leading trio but the Western Australian seemed to find a better groove as the race progressed, and started pulling a little bit of ground back on the trio. Cru Halliday was going with him.

The first lead change happened with ten laps to go, as Maxwell briefly nosed ahead of Herfoss only for the defending champion to get him right back at the next turn. That pair then started to gradually pull away from Falzon.

Robbie Bugden was starting to show good pace as the race entered its second half, he was the fastest man on lap seven and had closed up onto the tail of Halliday and Staring.

Maxwell took the lead on lap nine, but again Herfoss took him right back in short order. That tussle though had allowed Falzon to close right back up on that duo. Halliday and Bugden had got the better of Staring to move up to fourth and fifth places, but were certainly in the hunt for spots on the rostrum.

Halliday and Bugden both got Falzon on the next lap. Both of those men running Dunlop rubber, and now on the hunt for the two Pirelli shod men up front. The only one of that group still running in the 1m21s was Halliday.

Maxwell went up the inside of Herfoss with four laps to run, just before the front runners started encountering a lot of lapped traffic. It was perfect timing for Maxwell to take Herfoss and try and thread his way through the backmarkers.

Halliday took Herfoss for second place with three laps to run, but Herfoss took that position right back. Still in the picture also was Robbie Bugden, perhaps biding his time before mounting an all out attack on the last lap…

No sooner had I wrote that than Bugden took both Halliday and Herfoss to move up to second place. Maxwell had pulled the pin to try and escape, and with two laps to run had built a solid full-second buffer over his pursuers, whose tussling had perhaps given him the advantage he needed to pull a break.  Halliday also got the better of Herfoss, who was now clearly struggling for grip in the final stages of this race.

Bugden started pulling some ground back on Maxwell as the last lap got underway, pulling three-tenths out of Maxwell in the middle of the lap but Maxwell had a big enough buffer and took the win by half-a-second over Bugden, while Halliday rounded out the podium.  Herfoss backed it right off on the final lap to cruise home more than three-seconds behind that leading trio and claim fourth. 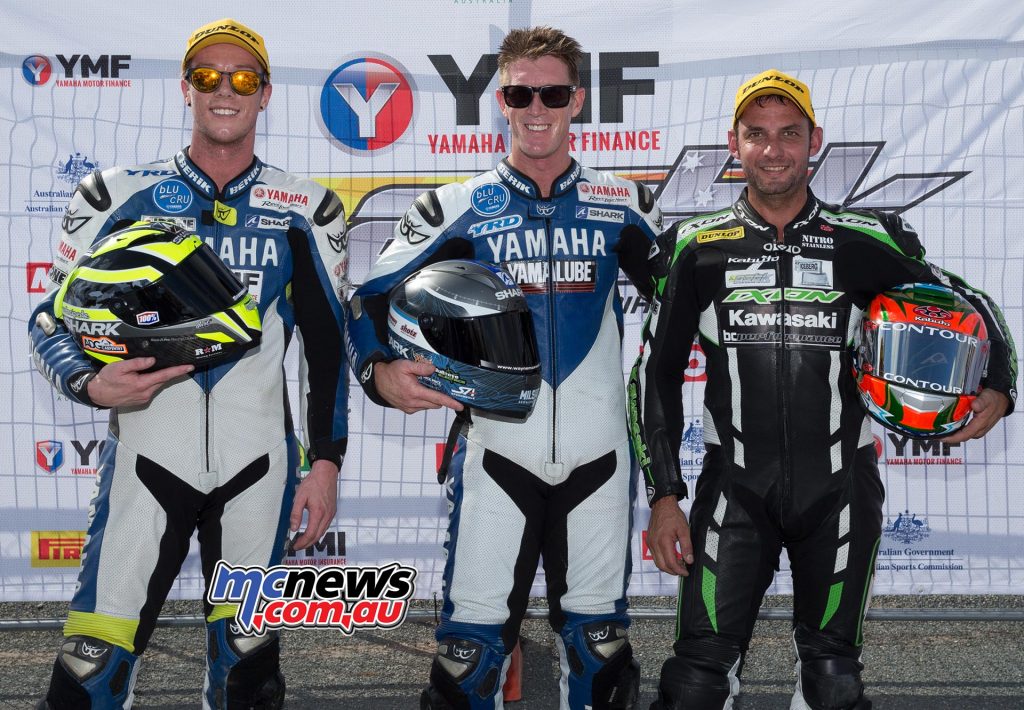 Championship leader Daniel Falzon finished fifth, crucially only a single point behind Herfoss, that pair still atop the championship standings, with Falzon’s buffer trimmed to a still considerable 12-points.  Quiet achiever Robbie Bugden now only a single point behind Herfoss, and Maxwell a further four-points behind in fourth place in the standings.