Broc Pearson had impressed in Timed Practice, in his debut on the DesmoSport Ducati Superbike the Supersport champ had been fourth quickest on a track that was far from perfect. Unfortunately though a mix-up in the pits in regards to rubber had put the 21-year-old on unmarked tyres (tyres not officially stickered as part of his tyre allowance/allocation), thus his time was cancelled and his automatic promotion through to the Q2 session nullified. Matt Walters was another one caught out in that same predicament. We reported there was also a potential cloud over Herfoss, who had been third quickest, but it seems that was a miscommunication here in the tower and his time stands.  Lachlan Epis has been penalised for using unmarked tyres in the same way that Pearson had.

By the time the Q1 session came around the track was completely dry, but going by the Supersport times set in their qualifying session an hour before, the track didn’t seem particularly ‘fast’. John Lytras took pole for the Supersport category with a 1m15.534, almost a second off Halliday’s Supersport pole record here from 2018.

The wind increased in ferocity just before Superbike qualifying got underway.

Broc Pearson topped the Q1 session with a 1m13.536 on the DesmoSport Ducati ahead of Lachlan Epis on the BMW Alliance M 1000 RR while the final rider to earn promotion through to Q2 was Max Stauffer.

Riders wasted no time getting out of the blocks in the quick-fire 15-minute final qualifying session. All 12 riders were on track right from the off.

Pearson had earned his spot in Q2 after topping QP1, after his time from Superbike Timed Practice was cancelled due to tyres not being marked due to an error made in the DesmoSport Ducati pit tent. He used that extra experience gained in QP1 to top the Q2 session early on with a 1m13.718.

Wayne Maxwell then went top with 11-minutes to go, a 1m13.370 to the defending champion, while current championship leader Mike Jones went P2 with a 1m13.707 on his first flying lap. There is of course an important championship point that comes with pole honours…

At the halfway point it was still Maxwell, Jones and Pearson 1-2-3, Bryan Staring had just moved forward to P4 while Lachlan Epis was fifth and Arthur Sissis sixth.

Maxwell went out again with six-minutes left on the shot clock and was on a flyer, three-tenths quicker at the first split, six-tenths at the second split, and then crossed the line to set a stunning 1m12.562, under the previous qualifying lap record, and almost a full second ahead of the competition.

Pearson then improved to P2, pushing Jones back to third, while Sissis moved up to fourth, relegating Staring back to fifth.

Herfoss then finally got wound up… A 1m13.301 to go P2 with three-minutes left.  Jones then immediately pushed the Penrite Honda man back to third with a 1m12.976.. His YRT team-mate then pushed Herfoss further back to fourth, a 1m13.301 to Cru Halliday. Staring then went quicker than his new team-mate Pearson to go P5. 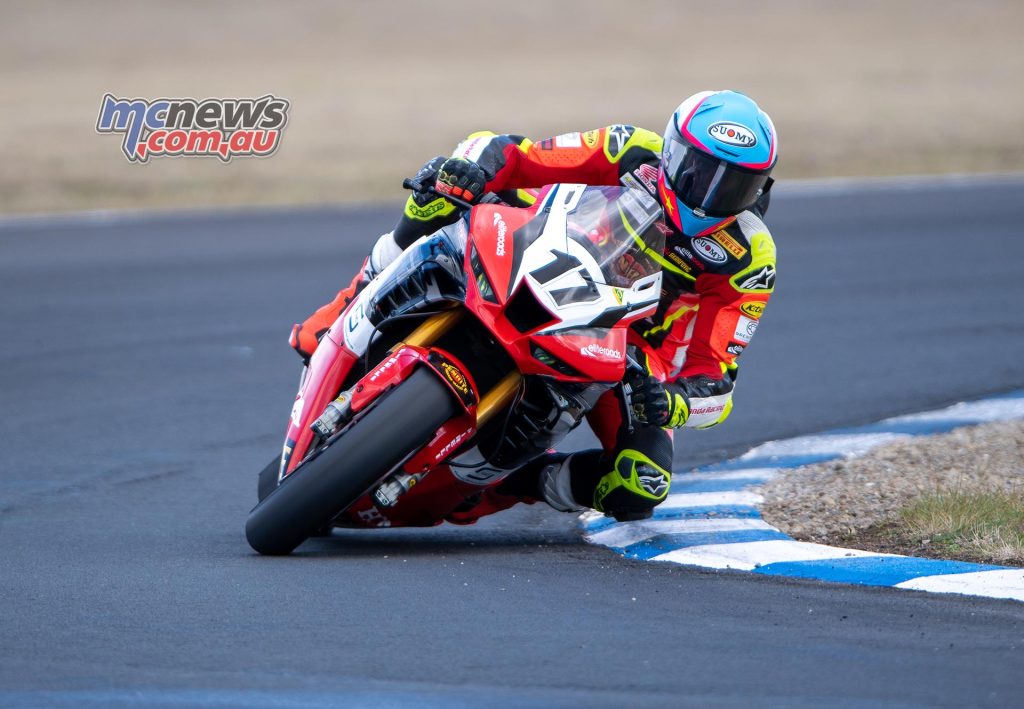 With less than a minute remaining Lachlan Epis catapulted his way forward to P4, pushing Herfoss back to fifth, Staring sixth, Herfoss seventh and Sissis eighth.

And that was game done…

Joining Maxwell on the front row will be YRT pair Mike Jones and Cru Halliday.

Lachlan Epis fronts the second row ahead of Troy Herfoss and Bryan Staring.  The 1m13.160 by Epis was more than 1.2-seconds quicker than he had ever lapped Morgan Park before.

Broc Pearson will lead the third row away alongside Arthur Sissis and Jed Metcher.  An impressive debut on the DesmoSport Ducati for Pearson, to be only a tenth of a second away from a rider as proven and experienced as his team-mate Bryan Staring is no mean feat. It will be interesting to see how smart the rookie can manage his tyres on race day…

With things pretty tight at the top, it will come down to who can make their rear tyre last the longest in tomorrow’s pair of 16-lap races. How hard do you go early on…? Or is it a case of keep the leaders in sight but some powder dry for a late attack…?

Taiyo Aksu won a heady seven-way battle in the Supersport 300 opener by nine-thousandths of a second over Liam Waters.  Jonathan Nahlous rounded out the podium a couple of bike lengths further behind while being hotly chased to the flag by Hayden and Glenn Nelson, Cameron Dunker and Cameron Swain.