In 2001 Yamaha redefined the small bore motocross class with the introduction of the first 250cc four stroke motocross bike, the all conquering YZ250F. As the first seriously competitive four-stroke 250 on the market it left other manufacturers playing catch up.

Fast forward nine years and Yamaha have launched the completely re-designed 2010 YZ250F aimed at being the best handling 250 motocross bike on the market. The new model has been designed around a completely new bilateral beam aluminium frame which features high lateral and torsional rigidity.

The YZ250F has a host of new and improved bits and pieces but noticeably absent is fuel injection. Yamaha claim the new carburettor settings work the best with their five-valve cylinder head.

I was really looking forward to riding the new YZ250F. The venue was the Cessnock motocross track in the Hunter Valley which played host to the last round of the NSW State titles in 2008, and I was keen to get out and get amongst it on the rough hard packed track.

After a quick riders’ briefing and a familiarisation with the machines it was time to fire them up and get on the track. The first thing that I noticed as I rode out of the pits was just how narrow the bike felt, and after a couple of laps just how nimble it was. It has been some time since I had ridden a YZ250F so it would take a couple of laps to adapt to the different power characteristics compared to the big bore counterpart I am accustomed to.

What did impress me straight away was the responsiveness from low down in the throttle range. Yamaha claim that this new model has better low to mid power, and it appears true and correct. The bike has no problem in pulling out of the tight rutted corners in what was probably a gear too high…(still riding it like a 450!). No hesitation, just nice smooth power delivery. After a couple of laps I started to find a bit of rhythm and was now pushing a little harder and hitting the jumps with a bit more momentum. I was trying to work into it slowly otherwise I knew the first things to flog out would have been my forearms….

After about 20 minutes I decided to head back in and have a drink and a think and take in what I had just experienced. This bike is so easy to ride!

As with the 2009 model the YZ250F has a 4 step adjustable handlebar clamp which enables the bars to be moved quite dramatically. I think this is a fantastic idea so for my next outing I chose a bike that had the bars set quite a long way forward, typically for somebody with a bit of length about them. I found it to be a little too far for me as I couldn’t get quite aggressive enough and on top of the bike quite as much as I would have liked but it is a fantastic idea and something I think all manufacturers should consider. It gives the individual rider the ability to be able to customise the bike to suit its own reach without having to outlay big bucks to get a different triple clamp.

The gearbox has had the ratios adjusted for third and fourth gears but as I hadn’t ridden the 09 I didn’t have anything to compare it to. In saying that, it was definitely a great shifting box with a good clutch feel. The ratios seem to work as the motor has no problem in pulling from gear to gear, and the engine continues pulling all the way up to the limiter.

After another rest period trying to allow the blood back out of my forearms and flowing around my body again, it was time to head out for another moto. During this break we spent a bit of time with the rear suspension settings before I went out. We adjusted the spring preload and set the sag for my weight. This made an immediate improvement to the rear end of the motorcycle and it seemed to track really well over the hard packed hard edged accelerating bumps that I find everywhere around this track.

It also had no problem in absorbing the bigger jumps, especially the big step up which I was purposely trying to over jump to see how the suspension would cope with some bigger forces. Even through the “rollers” or stutters as I call them with a stutter gumby at the helm, the bike was able to soak up and stay controlled to a point that I felt like I was actually half in control.

About the only real point that I was not totally happy with was the front suspension over some of the braking bumps. It didn’t feel quite as controlled as I would like, and this was upsetting the entry into the corners a little bit. I am sure nothing a little bit more time and some more clicks wouldn’t have been able to fix.

The brakes worked effortlessly and had no problem pulling up the YZ250F with only one finger applied to the brake lever. The front brake offers good feel with enough brake pressure to quite easily lock the front at speed.

Yamaha have definitely done their homework in regards to chassis geometry and steering head angle as this bike seems to have the best of both worlds.

The YZ250F turns in nicely and has no problem holding a tight line in a rut, but this has not compromised high speed stability.

Overall I was very impressed with this pocket rocket from Yamaha. The new styling on the YZ250F with its distinctive sharp lines looks sensational in the flesh. The exact release date and price is yet to be confirmed by Yamaha but at this stage it is looking as though the 2010 Yamaha YZ250F will be in dealer showrooms in late September and will retail for around $12,000. 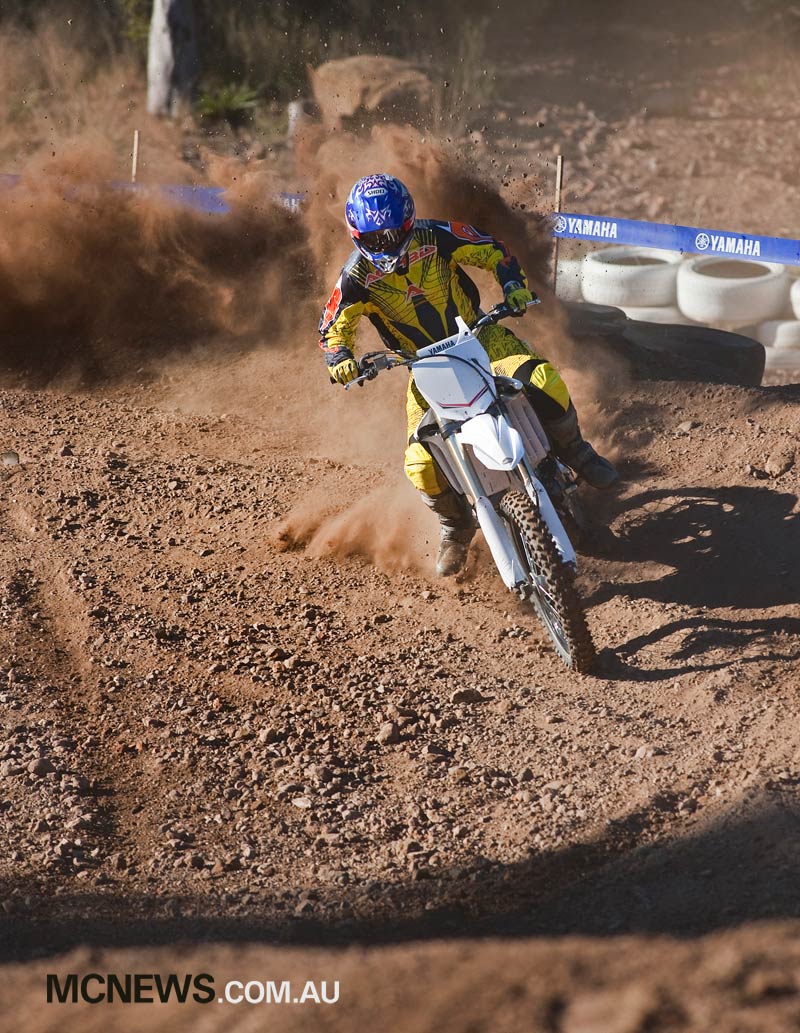 The Italians even make their police bikes look tasty