Every once in a while you are lucky enough to ride a motorcycle that just seems to feel right. I was fortunate enough to have that privilege on Wednesday when mcnews.com.au was invited to the launch of the revolutionary 2010 YZ450.

There has been a lot of hype and excitement within our industry regarding the release of this new radically different machine (2010 model from Yamaha) and it had no problem in living up to the hype and delivering on all levels.

For 2010 Yamaha have started from the ground up with the old moulds being thrown away to give the Yamaha engineers the freedom to create a new benchmark in the motocross era. Not since the YZ400 inception to the ranks in 1998 has Yamaha made such significant changes and developments in one full swoop.

It must have been a bit of a gamble for the head guys at Yamaha to make such radical developments to a machine that has had so much success in the racing scene. The 2009 YZ450 has won a swag of titles including World MX, World SX, AMA SX and also here in Australia the 2009 Australian motocross title with Jay Marmont at the helm. Although being the last of the Japanese manufacturers to remove the carburettor and implement fuel injection into the big bore machine, this certainly hasn’t detracted from its results over the previous seasons.

I was excited, pumped and looking forward to getting out on track to cut some laps and after the formalities of the presentation it was time to see if the machine was as good on the track as it appeared to be on paper.

MacArthur Motorcycle Club have done a great job in preparing a new motocross circuit at Appin and although the first couple of laps were a bit sketchy due to the watering of the track, it didn’t take long before we were able to open the new machine up and cut some laps.

I remember thinking after the first 3 laps just how light and precise the bike felt. If it wasn’t for the amount of horsepower available at your right wrist you could be mistaken for thinking that you might be on a smaller capacity machine.

Rider ergonomics felt good and although the new 450 is probably a little wider across the radiator shrouds than some of the other Japanese machines, it does feel comfortable and definitely does not detract from its nimble feel overall.

Seat positioning and height are good, allowing you to get your body weight over the front without too much effort. This becomes all the more important as you dial more turn into the throttle – the front wheel has no problem in wanting to reach for the sky.

Like the new YZ250F, the triple clamp and pro taper bars allow four different positions for bars so that riders with different arm reach and body positioning can be easily accommodated.

The biggest positive for me with the new YZ450 was the adjustable and programmable fuel injection. In the space of about 20 seconds you can plug in the optional power tuner and upload a new map which has the capability of making you believe you could be riding a completely different motorcycle! This has the potential to make any track surface a breeze with up to 9 pre programmed maps being able to be stored in the power tuner. These can then be uploaded to the bike in a matter of seconds.

My first session out was on the Race Map which gave good mid-range and top end power and was very sharp and crisp off the bottom. After getting acquainted with the bike and learning the track I thought it time to try a different setting.

Within a matter of 20 seconds, with me still sitting on the bike while the new map was loaded, I was then back out on the track with a “torque” map. This map was designed for more slippery surfaces allowing maximum traction on slick surfaces. The difference was incredible. I went from feeling like I was riding a full factory race bike to riding a 250 that had traction control.

There were some positives on the track with this map also. It made jumping the uphill double a breeze. The corner before the double was slightly off camber and slippery and with the race map it was hard to get the bike upright enough to dial enough gas on to get up and over, but with the torque map in I was able to use more throttle and get better traction making it up and over the double as though it wasn’t even there. Over the course of the next two hours I tried six pre programmed maps with all of them offering the rider a different feeling.

With all this Electronic gadgetry going on I really didn’t play with the suspension too much at all. I have to take this as a positive as I wasn’t looking to make changes, and the YZ450 was being very predictable and easy to ride. The bike’s ability to hold a tight line in the middle of the corner is great.

Engine braking is another positive for this machine. Under brakes into the downhill corners, I had no problem pulling up without the rear wheel trying to chatter its way past the front.

The obvious propelling motion that the bigger capacity bikes seem to possess doesn’t seem to affect the Yamaha. This was another time when I questioned myself as to what the capacity of this bike was.

The transition from brakes to throttle is great, the injection is smooth and instils confidence into the rider with the connection between throttle and rear wheel being very precise. This engine is probably the smoothest in regards to vibration out of all the 2010 model 450’s that I have ridden.

As the day progressed the track surface and grip levels changed markedly. By lunch time the sun had zapped any moisture that was sitting on the soil and it was dusty with soft powder in most corners. This gave the steering a work out, for the majority of the time the bike still was cornering with relative ease without too much front tucking.

My only real negative is the front brake. It lacks initial bite and progressively gets worse as it gets hotter. Yamaha are not alone in this regard though as all the Japanese motocross bikes seem to struggle in this area. I am not sure why they don’t just put a bigger rotor on standard.

Overall, I am really impressed with the new YZ450. Yamaha have really done their homework with this bike, and I am sure that they will be a hit with anyone who forks out the $12K to own one.

Check out the related links below for Trev’s innovative tech presentation, some onboard video with myself at Appin and MCNEWS.COM.AU’s usual huge variety of great images. We have also uploaded the Technical Manual for the EFI tuner for those that want to get their head around what it is capable of. The full GYTR accessories price list is also available to download and our friends at Gas Imports already have sexy Akrapovic exhaust systems ready to go for the new YZ450F. 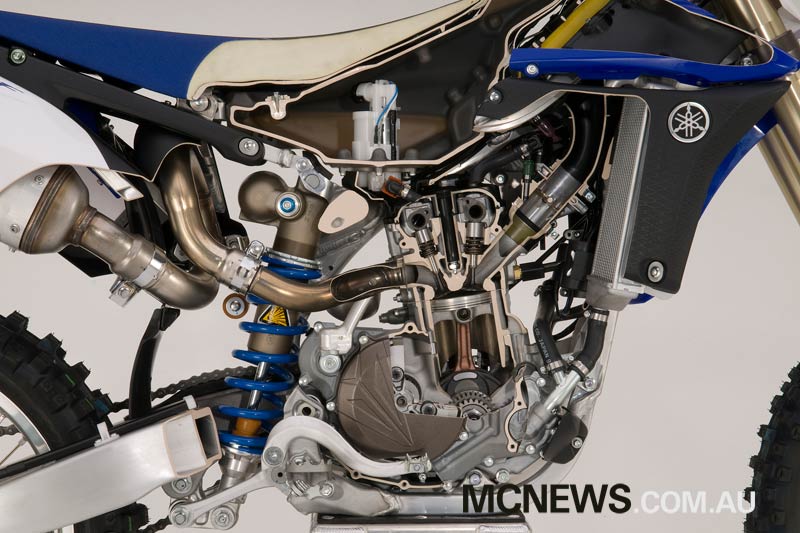 A history of brothers racing in MotoGP….