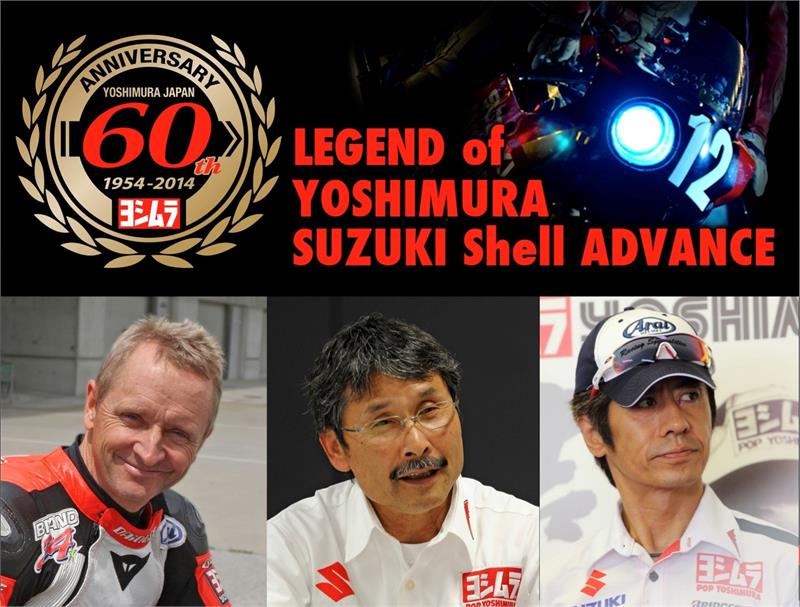 Schwantz, who won the 1993 World 500cc Grand Prix series for Suzuki – and who finished third at Suzuka in 2013 riding for Team Kagayama– will ride alongside his 1986 Suzuka 8-Hour partner Tsujimoto; the duo taking a podium-position in third overall.

Waters, who this season moves to the Tyco Suzuki British Superbike Team, will partner All Japan Superbike rider – and 2013 Suzuka 8-Hour runner-up for the Yoshimura Suzuki team – Tsuda.

Fujio Yoshimura – Yoshimura President & Legend Team Manager:  “We are glad to announce that the Suzuka 8-Hour this year is going to be one of the most memorable event ever for Yoshimura Japan. It is our 60th Anniversary year since Pops Yoshimura started this business back in 1954 and we are fielding a ‘Legend Team’ to celebrate our racing history.

“The team will run with two very famous riders; one is 1993 WGP Champion Kevin Schwantz and other is 1985-1986 All Japan Formula-1 Class Champion Satoshi Tsujimoto. They were paired together in the 1986 Suzuka 8-Hour and finished third overall. They will challenge not only for a podium finish but also hopefully give a lot to the entertainment side of motorsport as well.

“Even for riders like Schwantz and Tsujimoto, to challenge at the Suzuka 8-Hour will be extremely tough because of the high temperatures and humidity – which drains your energies to where you could get into serious dehydration problems – but both of them are willing to challenge to prove that it is something worth challenging for!

possible manner. Yoshimura believes that such an effort will make our anniversary a worthwhile project – just like Suzuka 8-Hour in 80’s. We can assure you that this effort hopefully makes all the spectators and our fans realise the team’s sincerity and determination; and also add a bit of nostalgic-excitement to the event.”

“Pops was a very influential man in my career; I first met him mid-way through the 1985 season riding for Yoshimura. Riding for Pops taught me a lot and helped groom me to be the competitor that I am. He was a real motivator and got the best out of everyone that worked around him.

“In 1994, I presented Pops with my winning Suzuka Grand Prix trophy – the fourth Japanese win of my career – in the Suzuki garage. That photo is still one of my favourites of all time. Before his passing, he told me I was his only rider to ever win a 500cc World Championship, or as it is known today MotoGP, and since his passing his words still hold true. To be teamed with my team-mate from 1986, Satoshi Tsujimoto, is a real honour. Thank you to the Suzuka circuit and everybody at Yoshimura Japan for the opportunity.”

Satoshi Tsujimoto: “It is the 60th anniversary year for Yoshimura and I am so excited to announce that I will race at the Suzuka 8-Hour as a member of the Legend Team. My team-mate is Kevin Schwantz, who joined the Yoshimura Factory at the same time as me back in 1984!

“It has been 30 years since then and I am honoured to race together in the Yoshimura family. I am now 54 years old, but I still have same Yoshimura ‘Challenging Spirit’ from the past and I will work hard to get myself in the best condition to enjoy the race. It is going to be a really tough race physically, but we will show our performance at the race.”

“It is not an ordinarily race for us as it is our 60th Anniversary since my grandfather started the business in 1954 and the Suzuka 8-Hour this year is going to be our memorial race to celebrate our history.

“We have a strong line-up in our riders: Takuya Tsuda – who is making lots of progress in his second year in Superbike – and Josh Waters, who showed great performance at the Suzuka 8-Hour in 2012. We also have another potential rider to make the team even stronger.

“It is going to be a very tough race again this year as there are strong Honda teams, there is Suzuki Endurance Racing Team (SERT), YART, other experienced teams from WEC and also the Kawasaki factory team is backing the race. But we are convinced that we can beat them with our ‘Racing Spirit’ and ‘Strong Bond.’

“We are really pleased to have two teams this year and the #12 Yoshimura Suzuki is going to be formed as the Legend Team with Kevin Schwantz & Satoshi Tsujimoto. They are the pair who finished third in 1986 and both are real legends.

“I am going to support them a lot, but my goal is leading the #34 team to the victory; it is going to be a big fight even within Yoshimura Suzuki and we will do our best to get our fifth Suzuka 8-Hours victory.”

Takuya Tsuda:  “I am so glad and excited to race the Suzuka 8-Hour again with the Yoshimura Suzuki Shell Advance Team. It is the 60th Anniversary for Yoshimura and I am proud to be in the team. Last year we were in the winning-position but finished second after a couple of racing accidents.

“We do not need this experience again and we will just push hard to finish race at the highest podium position. Since my team-mate Josh Waters is very fast at Suzuka, my team crews are always reliable – and team will build the best race machine for us – so it is going to be possible to bring a fifth victory for the team!”

Josh Waters:  “I am very excited to be joining Yoshimura Suzuki Shell Advance for this Suzuka 8-Hour race; some of my best racing memories have been at Suzuka and with Yoshimura Suzuki.

“My team-mate Takuya is very fast and we have a great team behind us, so we are going to be one of the strongest teams this year. Yoshimura Suzuki every year at the Suzuka 8 hour has been fighting for the victory, so this year we will try even harder to achieve the best result as it is a very special year for the team and I feel very lucky to be a part of it.” 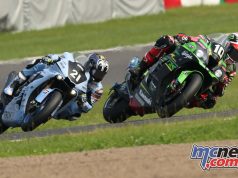 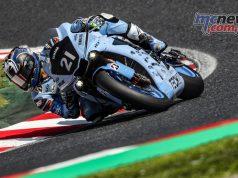