Japan’s Ryuichi Kiyonari claimed a sensational pole position for the fourth round of the MCE Insurance British Superbike Championship at Knockhill.  The triple champion pushed out Josh Brookes by just 0.004s on his final lap to return to the top in Datatag Extreme Qualifying for the first time since 2010.

The Buildbase BMW rider saved the best for last to outgun Brookes aboard the Milwaukee Yamaha in a frantic session which saw the positions change at the top six times in the final eight minutes and end with the top ten covered by just 0.569s.

Kiyonari secured Buildbase BMW’s first pole start of the season, he said: “I am very happy and feel confident with the bike that I can push on. I did faster laps, then went back some places and then on the last lap I knew I had to push and just thought ‘go’. We will push hard tomorrow and hopefully we can win, or at least be on the podium. I will try one hundred percent again for the races.”

Brookes, currently third in the standings and the only rider to have beaten Byrne so far, thought that he had done enough to secure pole. He said: “Normally I like Kiyo and he is one of my favourite past team-mates, but not right now because we were here to take the pole position.

“I am quite happy with where we are now because I started the weekend a bit frustrated but we have worked hard and fine tuned the Milwaukee Yamaha and that has given me confidence to push to the limit.

“We have been making improvements throughout qualifying and today it has been a race in the pitlane as well as on the track to achieve the results we have and I need to thank the team for their work. We were close today and we didn’t give up and we certainly will be pushing again tomorrow in the races.”

Byrne will start from third on the grid alongside Kiyonari and Brookes. He had a brief stint at the top and knows he has what it takes to fight back tomorrow.  Byrne said: “I’ve always said that pole was not that important but being on the front row here is. We will work hard tonight to find that extra bit so we can fight for the wins again tomorrow.”

Byrne’s pace was enough to relegate his team-mate, Flying Scot Stuart Easton, who had also led the session momentarily, back into fourth place and a second row start alongside James Ellison on the leading Lloyds British GBmoto Kawasaki. James Westmoreland on the second Buildbase BMW completes row two.

Tommy Bridewell had set the seventh best time, but a three grid place penalty was imposed on the Milwaukee Yamaha rider after a black and orange flag infringement in free practice, relegated him to the fourth row.

Graeme Gowland made it three back to back wins at the expense of his Motorpoint British Supersport Championship leading Smiths Triumph team-mate Billy McConnell in the rain shortened Sprint race.

Gowland had set the pace across the weekend and made a rapid get-away from pole start and was able to dictate terms throughout with McConnell riding hard, but unable to make any real impact and when the red-flags for rain ended the action at two thirds distance, the Aussie was trailing by 1.805secs.

“I just got my head down from the start, the same as what I did at Snetterton, and I wanted to lead from the front and run my own race. I’ve found a really good setting with the bike and can run quick, consistent laps but it was difficult with the spots of rain as it was hard to know how hard to push and how slippery it was.”

McConnell, whose lead in the title stakes is down to 21 points said: “I think Graeme called upon all his motocross experience in race one as he got a good gate and was gone. To begin with, I was able to close in a bit but with the rain coming on, I thought about the fact I was leading the Championship and opted to play it safe and settle for second. The rain got progressively worse so it was the right call to end the race and it was another perfect 1-2 for the team, our fifth in a row.”

Luke Stapleford took a determined third place on his Profile Triumph with Luke Jones fourth on the Acumen Industrial Services Triumph ahead of Jake Dixon on the Appleyard/Macadam & Doodson Yamaha. Former champion Alastair Seeley was sixth on the MarTrain Yamaha, enough to take him into third place in the standings, a point up on Glenn Irwin who finished tenth on his Gearlink Kawasaki.

In the Evo category local rider Tim Hastings was able to score his first Evo win of the season and his second successive podium finish aboard the E-Lites Kawasaki. Hastings battled with Evo championship leader Olsen throughout the race finishing just ahead at the red-flag finish. Ben Field completed the Evo podium, ahead of Josh Corner and Josh Daley. 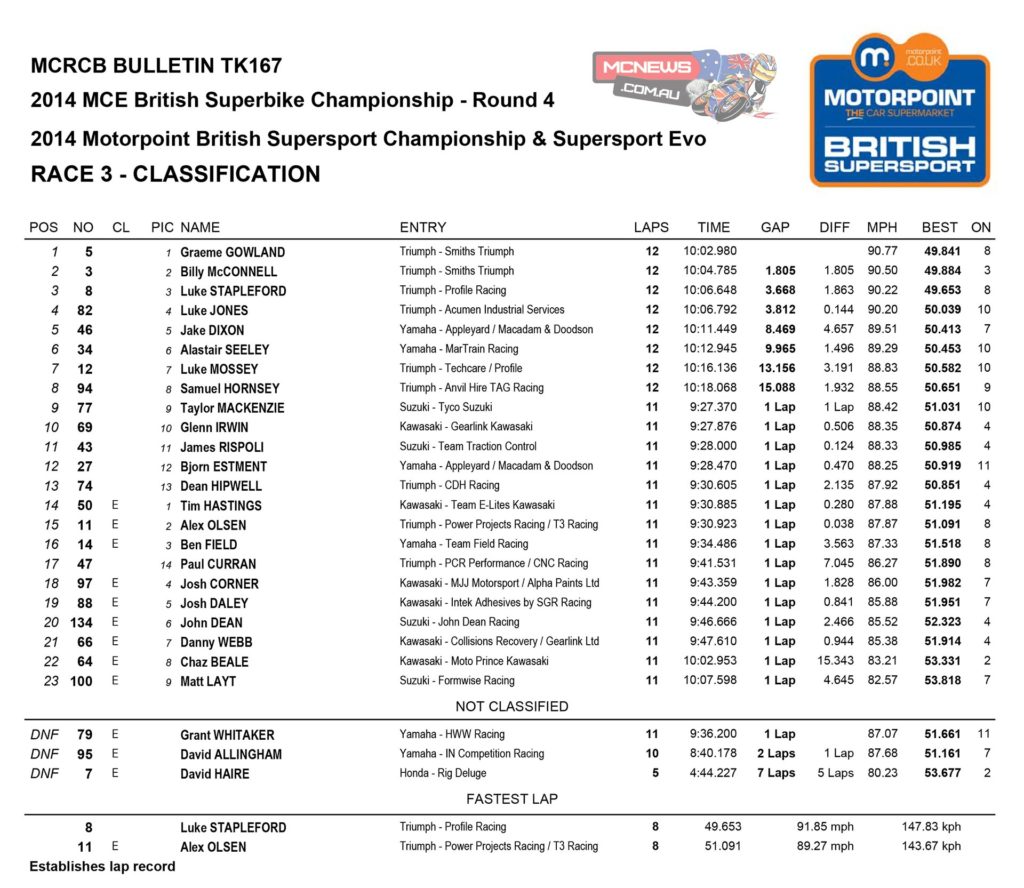 Series leading Andy Reid put his FFX Yamaha onto pole with a best lap in 51.555secs to outpace Joe Collier on the Be Wiser Kawasaki by 0.102secs with Tarran Mackenzie, 0.052secs down, enjoying his first front row start on the WD40 Kawasaki.  James Lodge, second in the standings, heads the second row from Snetterton race winner Kyle Ryde and Aleix Aulestia.

Danny Buchan’s first session time of 49.541secs on the Tsingtao WK Kawasaki as enough to secure pole start as rain spoiled the second period. Hudson Kennaugh, 0.432secs down on the Linxcel Trik Moto BMW, starts alongside with Lee Jackson on the Buildbase BMW completing the front row. Dominic Usher, Adam Jenkinson and Michael Robertson start from the second row. 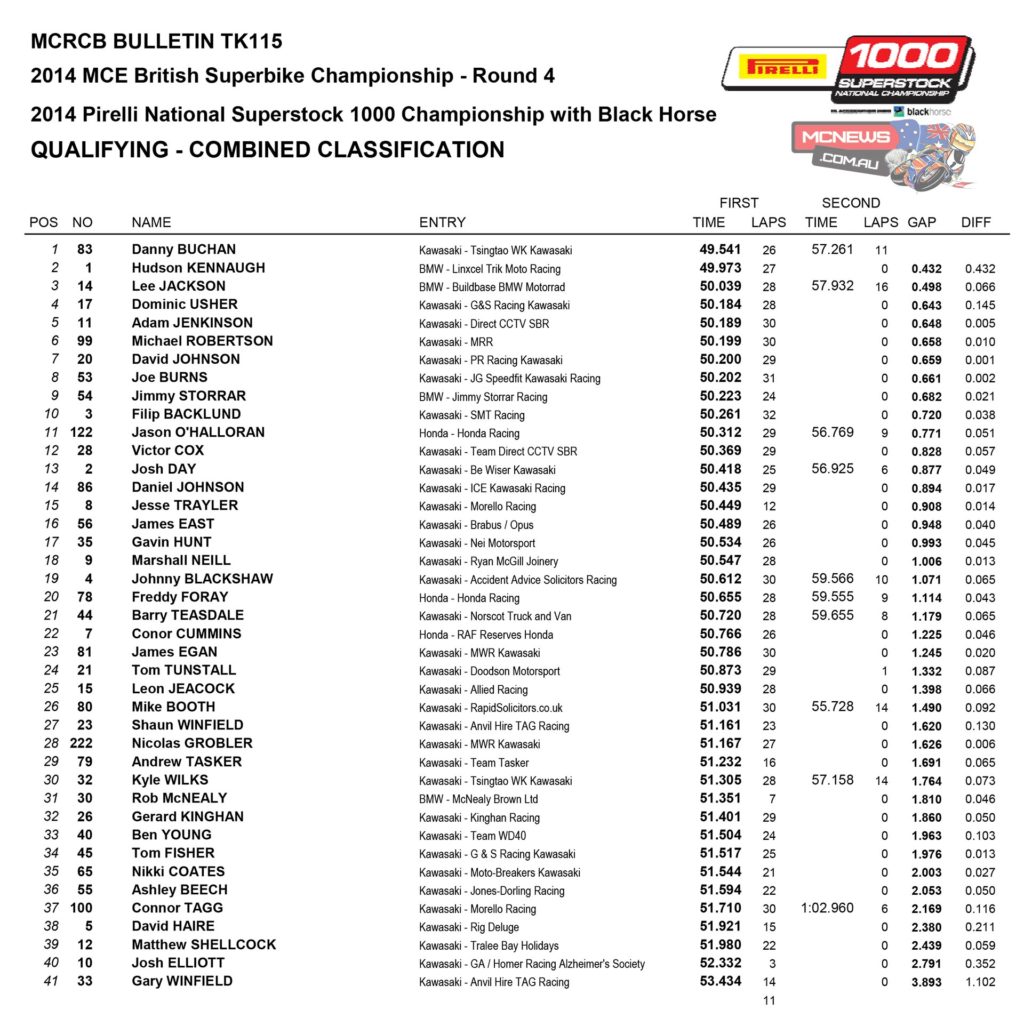 Joe Irving, the winner last time out, claimed pole start on his Redline KTM with a lap in 53.724secs in the first session, almost half a second faster than Moto3 series leader Jordan Weaving on the Burkert KTM with James Hobson completing an all Moto3 front row on the Two 4 Honda.  Ed Rendell, the leader in the 125GP class was fourth fastest on the Banks Honda to start alongside Jayson Uribe and Taz Taylor.

Series leaders Sean Hegarty/James Neave won the dash to the line by just 0.073secs ahead of former title winners Roger Lovelock/Aki Alto who had led the race in the early stages. Hegarty found a way through on the fourth lap but was not able to pull away and going into the hairpin for the final time Lovelock all but levelled with him. Pole starters Tony Brown/Ashley Hawes took third.

Dennis Hobbs, based at nearby Kelty, enjoyed home advantage as he took a comfortable first victory of the season by 1.350secs ahead of the series leading Leon Morris while defending champion Marty Nutt took his first podium finish of the season ahead of Rob Guiver and Sean Neary.