Kawasaki, BMW and Yamaha WorldSBK riders tested this week at Aragon’s Alcañiz Circuit, the same venue that will host the opening round of the 2021 MOTUL FIM Superbike World Championship season later this month. Track temperatures approached 39 Celsius towards the end of Wednesday’s running as teams and riders were exposed to warm weather and track conditions throughout the test.

“I am super-content with this test. We managed to tick everything off the list we had, which we prioritised with race simulations. I did one each day, at the time of day the races will be held – in fact we left them a little bit later, to the peak of the temperatures at 3pm. We expect the race weekend will be a little bit hotter than it is now. We have a lot of good information about those. I used both rear tyre options, so we have a lot of good information. Step-by-step we worked some more on my riding, some electronic items. But, more so myself, getting a rhythm and understanding how the tyre behaves over a lot of laps and setting up electronic strategies to utilise during the race. I want to thank the guys because they rebuilt the bike completely as we have been trying to understand where there has been some issues coming. So to rule everything out they have built me a completely new bike and they worked tirelessly. Kudos to all the team staff for this whole winter test programme. It has been very busy but I am looking forward to going to round one in a few weeks’ time and seeing where we stack up.” 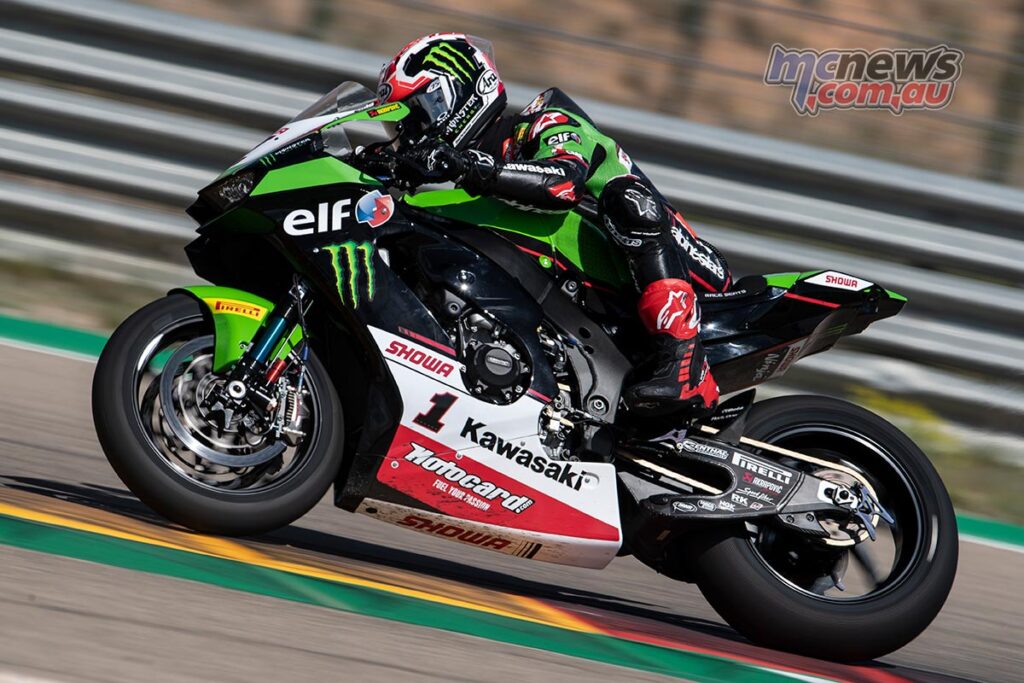 “We have used two complete days here in Aragon and with the new rules about testing this is maybe a lot. But we decided to make good preparations for the first race and immediately after Aragon is Estoril, and then the next one after that is quite close. So we wanted to make a base and confirm some things from the previous test. All has been going very well. On day one we focused on testing and confirming these small items, on the chassis side a kind of link with a little bit different character that we have been testing all winter. It has been confirmed and we are happy with the result. Johnny is very happy. We also made the final points with the electronics, working a lot with torque delivery to give the best feeling for JR, and to make a long run with the whole package. Yesterday we made a long run with an SC0 rear tyre, and it was very, very positive. He was very fast and consistent, and happy with the feeling on the bike. Today we focused on making a fast lap time and Johnny made the fastest lap time ever in Aragon. He improved two-tenths compared to last year. We made a second long run on a softer tyre on the final day too. Johnny is very happy, he is ‘talking’ very deeply with the bike and we are ready for the first race.”

Team-mate Alex Lowes was also at the test and recorded a best time of 1’49.182s after completing 186 laps; both riders using the final test to refine their Kawasaki ZX-10RR for the new season after completing most of their programme throughout previous tests.

“That was a good test for me. One of the main targets for today was to improve my feeling with the electronics on the bike. We did two race simulations this afternoon in hot conditions when the track, in theory, has the least grip. We were trying to find a better feeling with the bike. Overall I am really happy. We didn’t piece the whole bike together but now we have a couple of weeks to check the data and put our favourite feelings together and start the party for round one! 104 laps is maybe not the most I have done on one day on the Kawasaki but I had a smile on my face for all of them, so that is the main thing.”

BMW were on track across all three days for their final test ahead of the new campaign.

“It was the last test before it really gets serious – on this same track. Again, we had productive days under perfect weather conditions without any large technical issues so we could clearly conduct our test plan. Already, the satellite teams have shown added value for us because we can get more confirmation and we can share the test points so we can get through more work. That is very positive, we still have some homework to do before the first race but I am confident we will get there and already in some areas it’s a clear improvement, like top speed, brakes and so on. Overall I am happy and I am very much looking forward to finally race.”

As it was Laverty’s first test of 2021, the Irishman started with a similar bike to Jonas Folger (Bonovo MGM Action) from a previous test at Jerez before adding new items such as the 2021 swingarm. Laverty completed 197 laps across the three days with a best time of 1’50.604s.

Sporting his new-for-2021 livery, Folger was on an identical machine to the factory riders, Tom Sykes (BMW Motorrad WorldSBK Team) and team-mate Michael van der Mark, as he gears up for his first full-time WorldSBK campaign.  Folger completed 116 laps across the three days on the M 1000 RR, with a best lap time of 1’50.815s. At the factory outfit, the team were trying new components on the chassis including material previously tried in 2019, confirming what they had tried at the Supported Test.

“That was our final test before the start of the season. We once again used the time to test all our options and directions, from the chassis to the electronics. We learned a lot, so we are well-prepared for the first races.”

Sykes finished the test as the fastest BMW rider with a time of 1’49.857s with van der Mark around one second back from his team-mate; Sykes and van der Mark adding 187 and 173 laps to the team’s lap total respectively.

“It has been a very productive test. We have done such a lot now with the electronics all over, the traction control, the engine brake, the power level maps. We’ve also been working with different chassis configurations and set-up and were also trying some things with the engine. Apart from that it was quite some other fundamental things that we have been trying. So overall, they have been very busy days. A big thanks to the whole BMW Motorrad WorldSBK Team that has put in very long hours on all the preparations. We just need to go back now and use all this information but certainly there has been a lot gathered and I really feel we can improve the whole package of the new BMW M 1000 RR. I am looking forward to the first races now.”

“They have been fantastic days. All days, the weather was good. On Monday, it was a bit cold but then it got warmer and warmer so we got a lot of different weather and track conditions and this was really good. It was perfect to test here just before the first race. A lot of things to try, a lot of things to improve but I am really happy with the progression we are making. Of course it’s always difficult to see where you are at a test but we will find out at the race weekends. I am looking forward to some good battles again and to fight with the other guys on track.”

Eugene Laverty (RC Squadra Corse) made his first appearance of the 2021 off-season as he tested for his new team on the BMW M 1000 RR for the first time.

“First and foremost, I am so happy to be back on a bike after six and a half months off. The big surprise for me was that after this period I was able to get back on my bike and within two exists be on a good pace. So we had three really good days, good weather, surprisingly fast lap times and my main focus has been to improve the baking performance and we did that. So, job well done and I am really happy with my RC Squadra Corse team. Now I am looking forward to the first round here at Aragón after our successful test.”

Toprak Razgatlioglu (Pata Yamaha with BRIXX WorldSBK) made a welcome return to action following a positive COVID-19 test ruling him out of Yamaha’s previous test at the same venue. The Turkish star wasted no time in making up for lost time as he completed 93 laps on the first day and a total of 174 laps with a best lap of 1’49.763s across both days with Yamaha trying out new front brake components.

Toprak’s team-mate, Andrea Locatelli, continued to get to know his Yamaha YZF R1 ahead of his rookie campaign; racking up 172 laps across Tuesday and Wednesday.

Davies, who has a new team for 2021, posted a best time of 1’49.313s as the only Ducati representative on track in Alcañiz. The only other rider at the track from the WorldSBK paddock was Isaac Viñales (Orelac Racing VerdNatura) with the Spanish rider racking up 139 across Tuesday and Wednesday on his ZX-10RR, posting a best lap time of 1’51.724s.

The first round of the FIM Superbike World Championship will be held at Motorland Aragon from 21-23 May. It will be followed one week later by the second round at Estoril in Portugal, between 28-30 May.

Full Sunday wrap up from WorldSBK at Misano | All Classes