The third and penultimate round of the 2017 FIM SuperEnduro World Championship in Bilbao, Spain ended on a high for Red Bull KTM’s Alfredo Gomez as the Spaniard wrapped up his first ever overall SuperEnduro win.

Posting impressive results since the start of the series, Gomez did everything right in Bilbao to claim a well-deserved career first win and close to within 11 points of series leader Colton Haaker.

With a runner-up result in the opening final and victory in the second, Gomez’ night came to a perfect end when he topped the third and last final with his KTM 300 EXC to secure his first ever overall SuperEnduro win.

“It feels so good to get my first ever overall SuperEnduro win. In the first heat I was so nervous of crashing I was maybe a little too cautious and didn’t try hard enough to overtake Jonny (Walker). I came close on the last lap but I just couldn’t make it happen. I got a great start in the second heat – from the second row I got into the lead very quickly. I pushed hard then to open up a gap and just tried to be consistent to the finish.”

“It all came down to the final race for the overall, I knew I had to win. Again, I pushed hard and felt really good. It’s an incredible feeling to get this win, and even more special because it’s here in Spain. In the past I’ve won some heat races but I never really thought that I had the speed to win a main event. I started this championship with no pressure. My speed was good in Poland, and I think that my work in the previous years really helped me. I’ll keep pushing and see what happens at the final in France.”

Also, enjoying a great night in Bilbao was Gomez’ team-mate Jonny Walker. Switching to a KTM 350 EXC-F Walker fired out of the blocks to top the qualifying Superpole before going on to win the night’s first final.

“I’ve really been riding a lot recently, and I felt good throughout the night here in Spain. I switched to the 350, which worked great, but in general I feel like I rode a lot better than at the earlier rounds. I got good starts, rode consistently and came away with a solid runner-up result. It came down to the final race between Alfredo Gomez and myself for the win, although it’s a little frustrating to get second overall I’m pleased. I landed on someone in the last race of the night, which kind of knocked me off my stride. After winning the first race I knew what I needed to do and I felt like another win was more than possible. It’s been a really good night. I can’t wait for the final in France now.”

Having dominated round two of the series in Germany, Haaker secured 3/2/3 results in Bilbao and carries an 11-point advantage into the deciding final round in France.

Despite his third place overall result the third round of the SuperEnduro World Championship didn’t go quite as Colton Haaker hoped it would. Comfortable on the series’ most technical track to date, the FE 350 mounted rider posted the third fastest time in the Superpole qualifying session before going on to finish in the same position in the night’s opening final.

Securing his best result of the event in the reversed start order second final, Haaker finished less than five seconds behind race winner Alfredo Gomez. Bringing his night to a positive close with a third-place result in the third and last final, Colton earned himself a place on the podium alongside Alfredo Gomez and Jonny Walker. 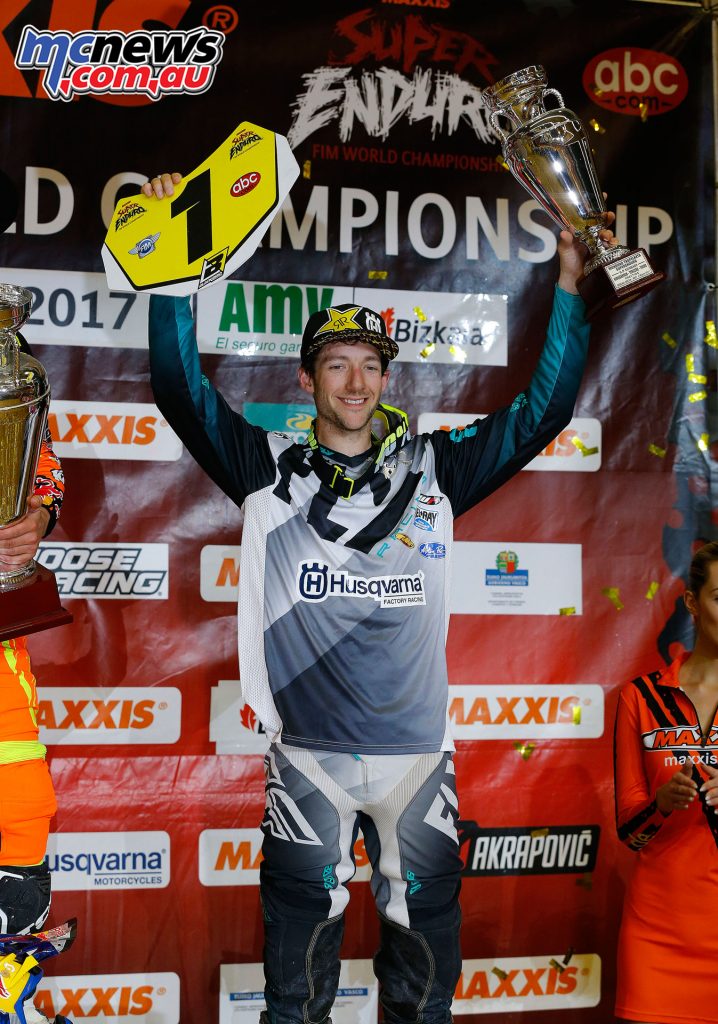 “It was a bit of a rough night for me. I did my best to salvage what I could but it certainly didn’t go the way I hoped it would. It’s hard to say exactly why things didn’t go so well for me – I’m normally fine on a more trials like track like this one. But third at the end of a not so great night isn’t too bad at all. I’m still leading the championship with one round to go. I’ll work hard during the next two weeks and be ready for the final in France.”

Mario Roman took fourth with a narrow four lead over Lettenbichler, who returned to racing in Bilbao having been forced to sit out round two of the series due to injury. Ending his night fifth overall and just four points from fourth placed Mario Roman he finished with 5-5-4 results.

“More than anything I’m just pleased to be back racing. The track was super technical, but it wasn’t too bad to race on. Finishing fifth overall having had some great battles with Mario Roman is cool. I only started riding again two weeks ago, so all things considered I’m pleased with my result.”

2017 SuperEnduro standings after 3 of 4 rounds