by Trev
in Motorcycle News, Motorcycle Racing, Uncategorized
A A
Share on FacebookShare on TwitterShare

Action around the Mountain Course commenced at 18.25 with the newcomers completing their controlled laps after the cancellation of Saturday’s session. Richard Quayle led the first group of three away, Peter Hickman, Laurent Hoffmann and Martin Jessopp, followed by the recently retired Ian Lougher with Phil Crowe, Vick de Cooremeter and Alan Bonner, and finally John Barton with Danny Webb, Dan Kruger and Callum Laidlaw for company.

Shortly before 7pm it was the turn of the ‘big boys’ with William and Michael Dunlop leading the field away followed by Michael Rutter and Guy Martin, Dan Kneen and James Hillier, Ian Mackman and Josh Brookes, David Johnson and Steve Mercer and Lee Johnston and Ian Hutchinson. All were on their Superbike machines with the exception of William Dunlop and Mackman  who opted for their Superstock mounts.

McGuinness left the line in the 11th pairing but two men who ran into trouble on their opening laps were Martin who was soon back in the pits and going out on his Superstock machine and Dan Stewart who wasn’t so fortunate, being stuck out at Douglas Road Corner, Kirk Michael for the session.

Second time around and McGuinness and Anstey went top of the timesheets at 126.355 and 126.299, the duo circulating in close formation, with Johnson also going quicker than his opening lap at 125.686. The newcomers were also picking up their speed on their second official laps, Jessopp on 109.674 and Hickman 109.039.

With conditions remaining perfect, save for a few reported damp patches at Stella Maris and Ramsey Hairpin, the riders were taking full advantage and getting in their full quota of laps.  Anstey made the most of the opportunity, increasing his pace slightly to 126.513mph on his third lap before putting in a late flyer of 127.473mph to go comfortably clear on the opening night.

McGuinness remained second on the leaderboard followed by Johnson, William Dunlop (125.400), Michael Dunlop (125.335) and Rutter (124.740). Impressive laps continued to be posted by the newcomers, none more so than Hickman whose lap of 115.103 was the quickest ever by a debutante on their opening night of practice. Fellow BSB rider Jessopp wasn’t too far behind on 113.293 but sandwiched in between was Belgian Hoffmann on 113.354.

The Dunlop brothers topped the Superstock times, Michael’s lap of 123.239 seeing him seven seconds clear of William at 122.461. Aussie David Johnson and Austrian Horst Saiger made it an International top four while Gary Johnson was quickest in the Supersport class after a late lap of 122.619mph, a solid start for the Smiths Triumph concern.

Joshua Brookes had technical problems with both bikes and only completed one lap, likewise Cameron Donald only managed one lap on the Norton.

The solo session finished at 20.05 and, with their newcomer laps safely completed at the beginning of the evening, the Formula Two Sidecars first official session was soon up and running with Dave Molyneux/Patrick Farrance, Ben and Tom Birchall and John Holden/Andy Winkle first away.

John McGuinness – “When I was lying on the rocks in the Lake District a couple of months ago I didn’t think I’d be competitive when I got here so tonight’s been a real boost to me and it’s great to bang in a good lap straightaway. I just went out there tonight and rode my motorbike without thinking too much and everything just started to happen naturally for me. The familiar surroundings of the TT Course are where I’m at my happiest and it felt really good out there tonight, just letting the course flow and lapping at a nice, steady speed.

“The two laps on the big bike felt good as did the 600 although it was quite a difficult session as the sun was really bad, as worse as I’ve ever know it since I’ve been coming here. With all the rain over the last few months, there’s more foliage around the course and the sun poking through the trees was creating a strobe light effect so it definitely kept me on my toes. It’s always good to get the first session under your belt, even more so for me this year and I feel the weight’s been lifted off my shoulders so we’re up and running now and ready to roll.”

Molyneux and Farrance really upped the pace on their second lap with a speed of 114.350, their quickest opening night speed ever, whilst the Birchalls quickened their tempo also with a 110mph+ lap. Equally impressive was the lap by the father and son pairing of Ian and Carl Bell, a speed of 107.254mph placing them fourth on the leaderboard while Carl Fenwick/Phil Knapton (106.532) slotted into sixth behind Lelias.

Tony Thirkell/Nigel Barlow were reported to have had an incident at Sulby Bridge and while Thirkell was unhurt, Barlow was taken by airmed to Nobles Hospital with reported ankle injuries. 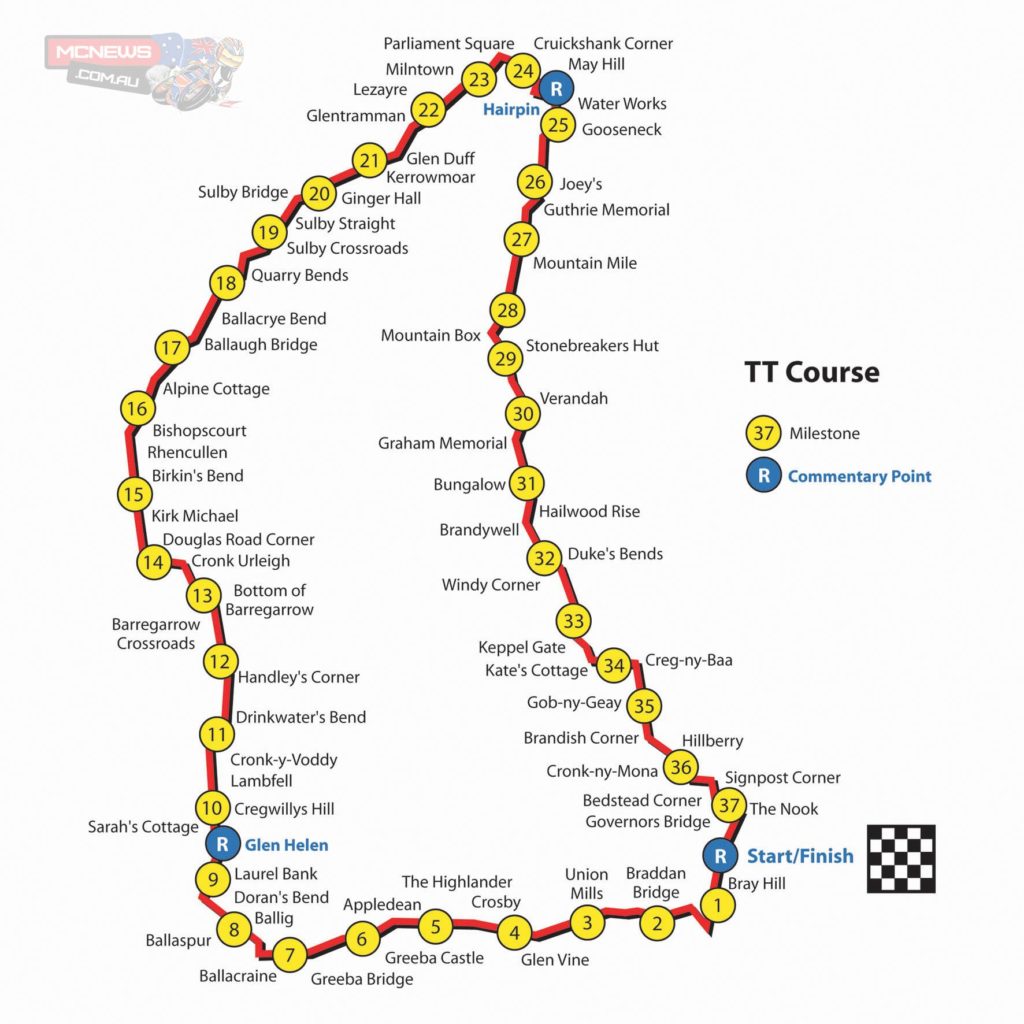