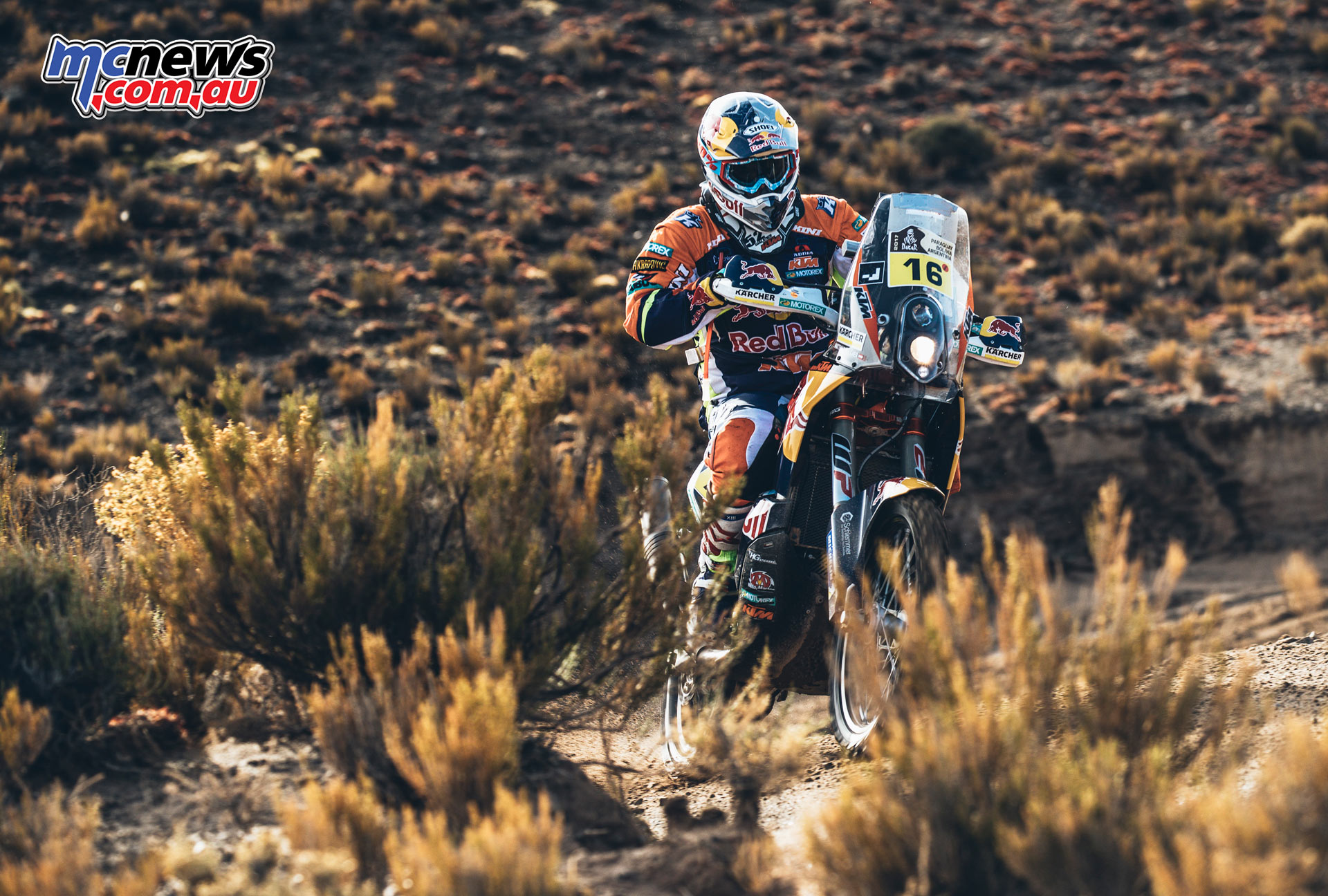 Stage 4was clearly another brutal test for both rider and machine. Now continually at altitudes above 3500 meters, riders had to tackle 521 km on the bike, including an energy robbing 416 km timed special.

The field, which started the day with 126 of the original 146 riders still in the race, had the new experience of negotiating sand dunes at altitude. In previous editions of the South American Dakar they have encountered dunes in Chile’s legendary coastal Atacama Desert.

Joan Barreda pulled off another stunning ride as the 2017 Rally Dakar crosses into Bolivia. The Monster Energy Honda Team rider battled hard throughout the whole stage – not an easy task considering that he was opening the track. The 416 kilometre special subjected the competitors to the first dunes seen so far in the rally, requiring some serious focus and deft navigation skills.

Toby Price, who won the second stage but then lost time at the beginning of Wednesday’s Stage 3 after a navigational error,  crashed in a riverbed at the 371 km mark.

The medical team reported he had fractured the thighbone in his left leg when he was only a few kilometers from Tupiza in southern Bolivia, where the stage finished. The factory team later confirmed Price was being transported to the capital La Paz for further treatment. Unfortunately this puts an end to his 2017 Dakar attempt.

Fellow Aussie Todd Smith posted a great result, with 13th for Stage 4 – an incredibly strong showing, as the highest ranking Australian rider, while Mathew Hart finished 52nd, having ridden with a shoulder injury incurred in Stage 3.

Many riders went astray and dropped time, while Barreda took the opportunity to tighten the screw, going full throttle on the Honda CRF450 Rally to put yet more ground between himself and adversaries.

From CP2 onwards, the Spaniard led until race-end in Bolivia where the terrain was more precipitous with rocks galore and river-crossings to boot. Joan chose to play it safe in the latter part of the stage, which saw him concede time, and eventually the stage victory to Matthias Walkner.

“Actually at the beginning of the stage I didn’t feel so good and I got a bit lost, like everybody, I think, because it was tricky navigation. After I had a good speed but I didn’t think it would be enough to win. I got to Price about five minutes after the crash and Adrien Van Beveren and Paulo Goncalves had already stopped. I saw he was awake and they told me he was more or less okay, so I kept on going. Where he crashed it was in a riverbed, where the ground changed very quickly. First it was sandy and you could go flat out at 140 km/h, but then you came to some big stones and it’s very hard to find the right speed. If you hit a stone with the motorbike then its difficult.”

Runner-up spot on the day proved to be a positive for Barreda as he widens the gap at the top of the leaderboard boasting 18’19” over Chilean rider Pablo Quintanilla.

“I’m happy because I had a great stage today. The first part was very picturesque. I felt good and comfortable without making any navigational errors and kept up a good pace. I got off to a flying start over the first few kilometres and was very focused in the dunes, being very careful not to make any mistakes with the roadbook. I only slowed the pace down in the final part of the day with the arrival in Bolivia, where there were river-crossings and a lot of rocks. I happy because I was ahead all day and I’ve increased the advantage at the top of the general standings. It is a shame what has happened to Toby Price. Hopefully it’s nothing too serious and he will get over it soon and be back at full speed on the track soon.”

Monster Energy Honda Team rounded out a red-letter day with Michael Metge posting a virtual podium place. The Frenchman was outstanding in the fourth stage, setting a cracking pace and executing near-perfect navigation.

“I haven’t been able to shake the headache off. It’s been hurting since we got up to 4,000 metres elevation yesterday. Anyway, it doesn’t appear to be affecting my riding as I believe that I rode a really good special both yesterday and today. It’s a pity that I had some problems with the neutralization. Things went well today from the beginning. The dunes and the navigation were problem-free. The only off-moment was when I went back thinking that I had made a mistake, only to find that it had been the correct one. I hope to keep this up until the rest day.”

This allowed ‘Mika’ to whittle down some of the time lost in the previous stage and improve in the general rankings. He had been one of the riders to lose out yesterday as race organizers failed to consider the time that some riders had needed to complete the liaison section after getting trapped in a storm on the ascent towards Jujuy.

Leading Husqvarna mounted rider Pablo Quintanilla said it had been a tough day in high altitude, and tackling the soft dunes in Bolivia. Quintanilla finishes Stage 4 in second position overall.

“We began with the dunes and at altitude and this affected both us and the bikes. I made a small mistake trying to find a visible feature in the vegetation at the end of the dunes but after that, I felt good. I rode all day alone and I think the feeling is better than yesterday, so it was a good stage for me. At the moment I’m feeling good. I had a little headache at the end of the stage but that’s normal with the altitude and trying to go fast. It seems like from yesterday until we leave Bolivia, it will be difficult navigation so we need to stay focused and try to be consistent. Tomorrow we have another long stage and I see we have some difficult off-piste parts so I will try to do a good stage.”

Pela Renet followed up on his third place finish in Wednesday’s stage three with another confidence boosting ride to finish eighth. He finished 12.30 minutes behind stage winner Matthias Walkner of Austria.

“I started in third this morning and some of the others got lost, so I only had one line in front of me. I rode all day alone and Pablo caught me not far from the end of the stage. I’m really happy with my position. The goal is clear, that’s to be at the end and not take too many risks. But that’s not easy because when you are on the bike you always want to give a bit more gas. I try to stay calm. I really take my time at the tricky places to really check my road book and my notes. At the moment that’s working well, so I will continue like this.”

Ricky Brabec ran into some problems at the start of the special. The American dropped precious time going in search of the correct route. Once back on track, he made it safe back to the Tupiza bivouac without further hitches.

“Today was one of the most difficult days. There was a lot of really tricky navigation. At the start of the special I made a mistake and had a bit of trouble finding the way before I finally got back on track. This made me become a lot more focused on what I was doing. I managed to pick the pace up and got back into the race. I’m happy to have made it back to the bivouac. Let’s keep on fighting and working as a team. I hope to improve over the coming stages.”

Likewise, Paulo Goncalves got delayed near the start and conceded time. Subsequently, with the end of the stage in sight, the Portuguese rider came across an injured Toby Price on the ground.

Goncalves halted to alert the helicopter to the plight of the Australian who had suffered a broken right femur. Once last year’s champion had been attended to, Paulo was back en route for the Dakar’s first stopover in Bolivia.

Sunderland was disappointed to have lost time at the beginning of the stage and finished in 12th.

“It is really frustrating because I’m trying to spend a lot of time on the notes, but it’s very unclear. I can only speak for myself but I heard other riders are also having problems. Even some of the car teams who have a guy just for the navigation are having difficulties. I guess the organizers want to make it like this. It’s frustrating because I felt good and strong the rest of the day but its pretty rough to lose 10-15 minutes at the start of the day and for sure its going to get worse. I also want to shout out to my buddy Toby Price and hope he can get better soon. It is a big blow for KTM but we are a good team and a strong one and we’ll keep fighting until the last day.”

The high elevation will once again take centre-stage for tomorrow’s fifth day that kicks off from Tupiza and concludes in Oruro, once again with heavy measures of dunes and navigation.