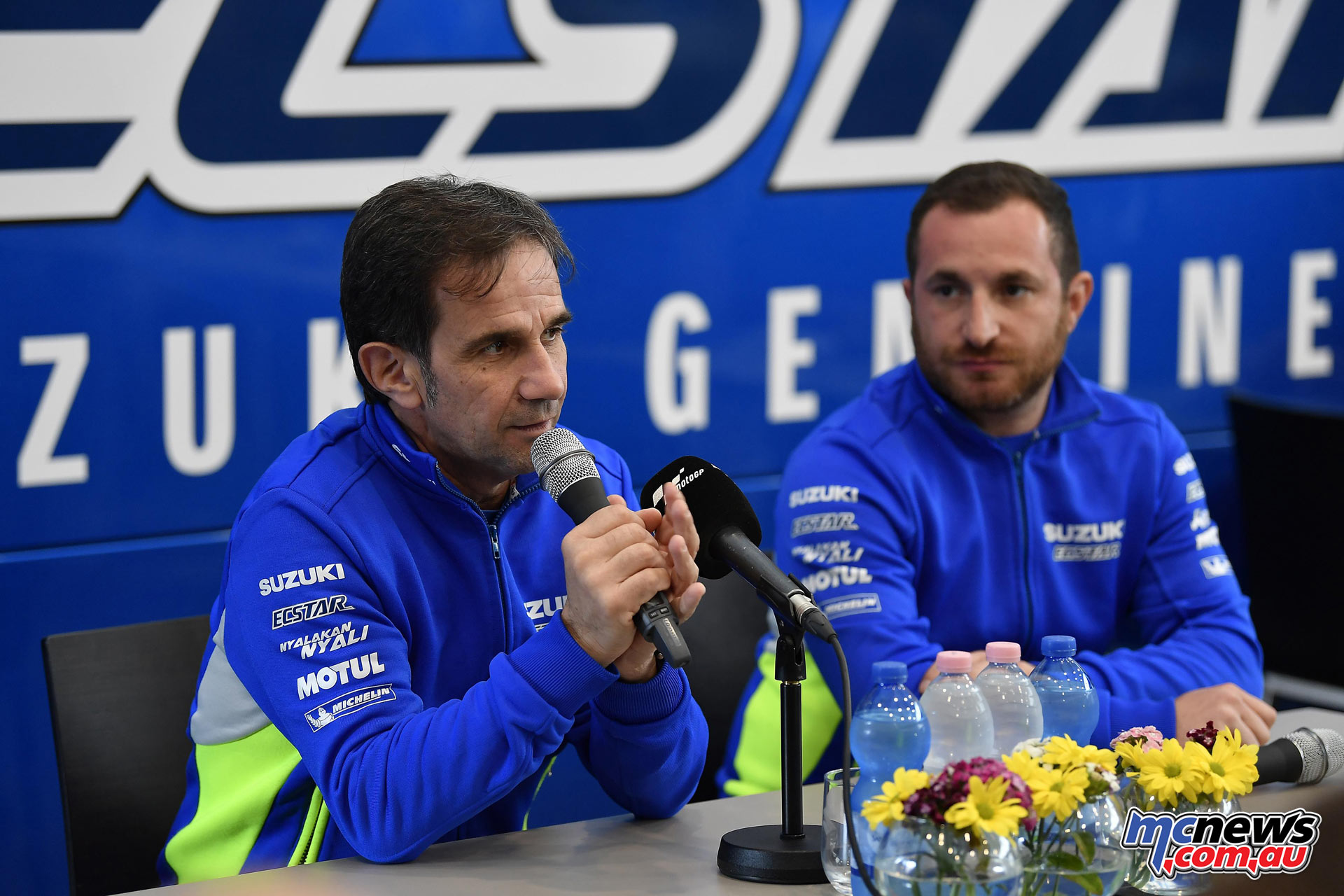 Team Suzuki ECSTAR Team Manager Davide Brivio has spoken today in Valencia ahead the first testing of the 2017 season tomorrow, to make a general assessment of the 2016 season for Suzuki and the first two years in MotoGP after Suzuki’s comeback.

“Today is a quite important day for us as we are facing important changes. Officially this is the first day of the 2017 Championship and we are welcoming two new riders, which makes this a fresh new start for us.

“But we have also just finished our last race, which was only yesterday, so we still have fresh in our mind all what happened in these first two years, and especially in 2016, which has been an emotional season for us.

“We are quite happy for what we have achieved. We feel we did very good improvements, especially in the second-half of the season, I would say from Brno on and also after the victory we got in Silverstone we could fight consistently within the top riders. We still have some issues in the wet, but in dry races we were always fighting for the podium.

“Also our riders played a very important role, Maverick of course has grown-up very much and he could race very well exploiting the potential of our machine, but also in some races like Japan or Australia in the dry, also Aleix was in the condition to fight for the podium. This is a very important sign for our development.

“If I think back to the beginning of this 2016 season, I remember we said that our target was to continue getting closer-and-closer to the top. We achieved a good level of performance and we hit our target in some races, so the target for 2017 is to be more consistent in this fight for the podium and do it on a regular basis.

“We have to be ready to seize any opportunities we will have, of course the competition will be very fierce and our opponents are pretty impressive for how good they are, I feel that the consistency will be a key for success. We have the potential to be in this fight, and this is where we want to be.

“We expect a lot from Iannone, we signed him because we think he is a strong rider and capable of winning races. We signed him before his first victory in Austria, as we already had the feeling he can be a race winner.

“It’s up to us to give him a good package, a good bike, and to set-up the bike in a way that can suit his riding style. We have also seen yesterday the kind of race he is able to do and how a fighter he is. With him we started this project which is to have an experienced rider that can be immediately ready to fight for podium and victory.

“At the same time we will exploit the experience we did with Maverick in how to grow a debutant rider, to help Alex to grow his skills and get at ease with a MotoGP machine, hoping to find him competitive as soon as possible.

“We still believe he is a talented rider, but we are aware he may need some time to get acquainted to a MotoGP machine; and for this our experience will help.

“We are not going to introduce a completely-new bike for 2017. Our basis is already pretty-good and we will proceed with further improvements, step-by-step. We are working to improve the engine, last year we had a big gap to close in the engine, but this year we are in a different situation as our performance is comparable with competitors.

“However, we will try to improve further, because riders have never enough power and also because we know that competitors will improve and grow during this Winter. From tomorrow on, the bikes will have a first step of improvement, we will have the direct engine starter; this is not yet the final version that will arrive in February, but it’s a first step.

“Then we are working on some chassis parts for Sepang and Phillip Island, but we will be very careful with this and we will carefully evaluate if they are real improvements before adopting them.

“We need to make more experience in the electronics management, especially in the wet. We have made many steps forward but it’s not enough yet. Then we also have some issues in the management of the performance for the second part of the races. In particular to preserve better tyres and keep them in a better-shape for the final laps. This would allow us to be more consistent in fighting for the podium.

“Also, tomorrow we start a new chapter and with Andrea we will start a development process, listening to his requests on how and where to improve the bike. He is an experienced rider and his advice or requests will be crucial for us.

“Tom [O’Kane – Espargaró’s former Crew Chief] is not leaving the team, on the contrary he will have a very important role in the analysis of data and also looking for a better way to analyse the information.

“We are working a lot on this area, on how to use in the best possible way the information we get for the race weekend, so his experience will be very useful for our engineers, especially those who are back at the Factory, so he will continue with us and we will rely on his skills again.

“I believe that losing concessions will not be a huge problem for us. We were prepared for this, we knew that this would happen sometime in the future; and now, in my opinion, the challenge is even more intriguing.

“About engines, maybe we maybe worked a little more-relaxed this year as we had more, we had the advantage to introduce an updated engine and you have more possibility, while with seven, you freeze the engine and keep it for the season, so this maybe the only real advantage.

“But we are here to compete at the same level as other manufacturers, so the competition will be also more interesting.”