The MXGP of Switzerland presented by iXS roared to life with thousands of enthusiastic fans witnessing epic racing. The Swiss chocolate like soil of Frauenfeld – Gachnang provided the perfect surface for an MXGP showdown, and in the end it was Red Bull KTM Factory Racing’s Jeffrey Herlings who stole the show, narrowly, from Gautier Paulin.

Red Bull KTM Factory Racing’s Jeffrey Herlings came into the weekend with a win on the Lommel sands and he was hoping for another in Switzerland. In race 1 it looked as if his dreams would not turn into reality when he started near 15th position. One lap in he made his way up to 10 and from there he continued charging.

At the front of the field it was Wilvo Yamaha MXGP’s Arnaud Tonus leading his home GP. Tonus took the lead on the first few turns from the #99 FOX Holeshot winner, Rockstar Energy Husqvarna Factory Racing’s Max Anstie.

Anstie made several attempts to pass Tonus throughout the 16 lap race but the Brit never found a way past. In third and fourth it was the French riders of Rockstar Energy Husqvarna Factory Racing’s Gautier Paulin and Monster Energy Yamaha Factory MXGP’s Romain Febvre.

Febvre hounded the back tire of Paulin and on lap 8 made it by but it was short lived as he stalled his Yamaha and took time restarting the machine. The error allowed Red Bull KTM Factory Racing’s Antonio Cairoli into third right after he’d passed Paulin.

Back at the front Tonus responded to the challenge and he won his first ever MXGP race ahead of Anstie, Cairoli, Paulin, and Febvre while Herlings finished 6th.

In race 2 Tonus and Herlings switched roles with Tonus around 18th and Herlings in the lead after a Cairoli FOX Holeshot. Cairoli also lost a spot to Paulin and he was passed by Febvre in the early portion of the race.

While Herlings started to check out from the field Tonus was fighting his way through it. Tonus fell on the tunnel jump prior to the finish and at first he was unscathed by whilst trying to return to his bike was hit by Suzuki World MXGP’s Arminas Jasikonis send both riders tumbling. Jasikonis remounted but Tonus walked of the track unable to finish in a disappointing end to his weekend.

The front four stayed in the same order to the finish with Herlings winning, Paulin second and Febvre third after a Cairoli charge came up short. Team HRC’s Tim Gajser took the final spot in the race 2 top 5.

“For the championship this was good but I’m not happy about the GP; everybody was all-in to win and I rode a little bit too carefully in the beginning of the second moto and made a few big mistakes that cost me a lot of time. The win was possible and I needed to be more aggressive; I slept a bit too much! Anyway it is always good to finish on the podium and the title is coming closer and closer and this is what we are working for. Sweden is another good track that we missed last year and we’ll look to the podium again.”

The overall win was taken by Herlings but only gave him a 2 point gain on Cairoli in the championship.

“Everything fell into place for me this time. I’ve had GPs when I’ve been 1-2 and still lost out but this time I went 6-1 and had the overall; I’m really happy with that. The track was awesome if you had a good start. If you didn’t then it was a nightmare and so tough to pass with all that roost. I enjoyed the second moto though with the crowd noise! There is still one guy in front of me in the championship so I will continue to look ahead. I know the championship is kinda over unless something happens to Tony and we all hope that doesn’t happen; if I can get second this year then it is still a good thing.” 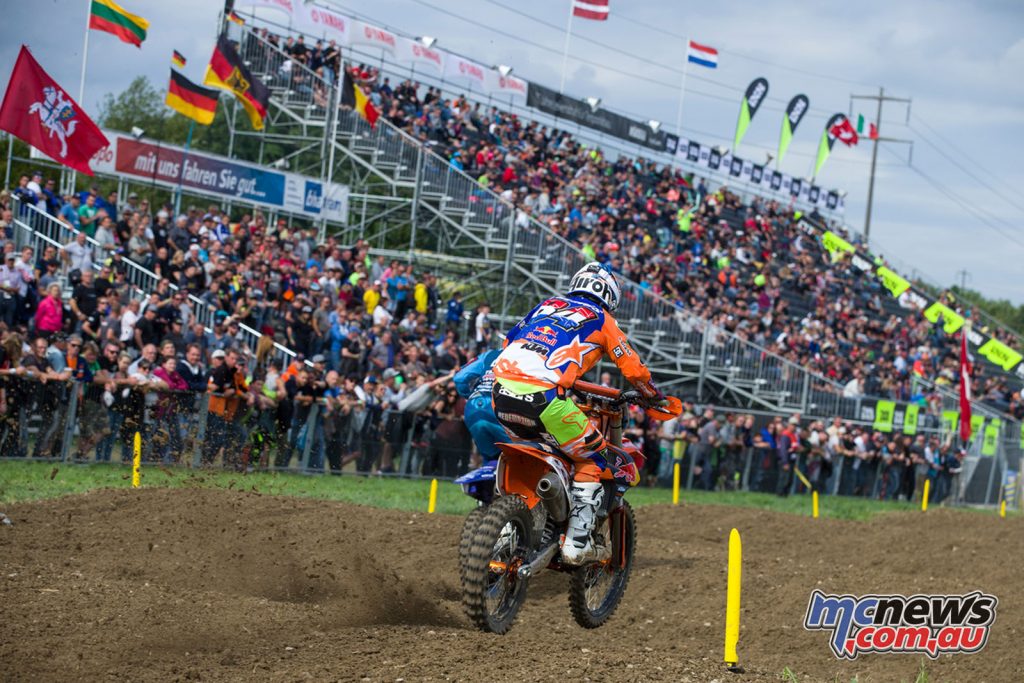 Paulin’s 4-2 gave him second overall and his first visit to the podium since Russia.

“I’m really happy to be back on the podium. We had a big fight for the overall win here in Switzerland and eventually I ended up sharing the same number of points with Jeffrey Herlings. It feels good to be back up to speed and I can’t thank my team enough for all their hard work and dedication. The pace was high in both motos. I got two good starts and that was positive. It also felt great to be leading the second moto for some laps. Overall, this GP has been a big step in the right direction and I will keep pushing to take this momentum into the coming events.” 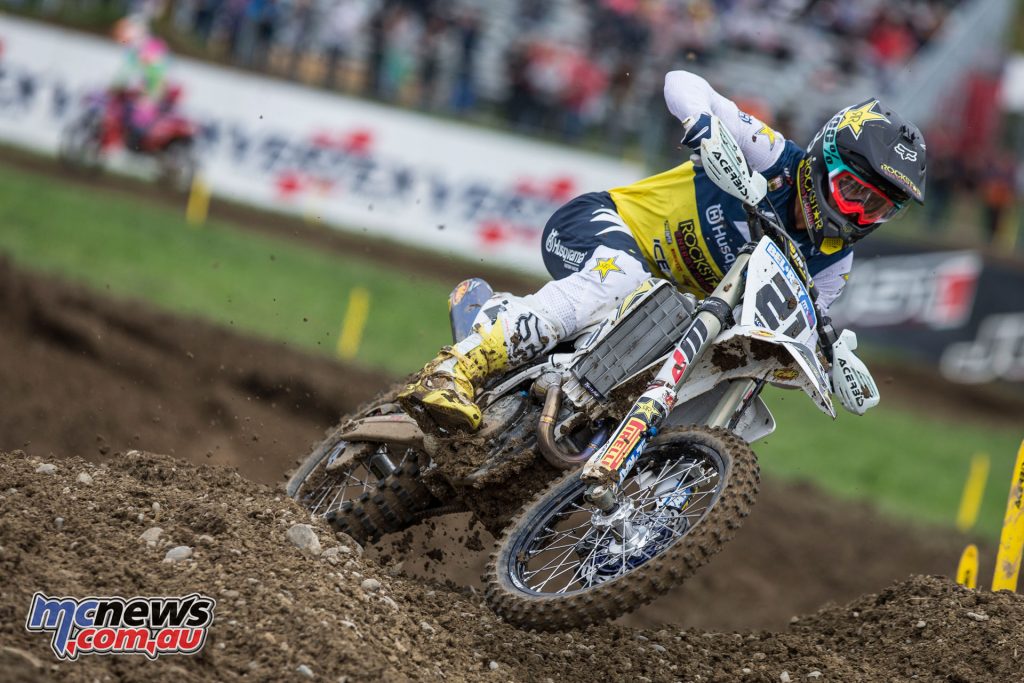 “The weekend was good, but not perfect. The most positive thing is we have found a good setting for the start and I can get out of the gate really quick. I had good starts today but in the first race I stalled the bike into one corner and I lost too much time and two places. I was really disappointed but in the second moto, I was third all of the race battling for second. It was quite difficult to find some good places to pass. I only just missed the podium which is hard to accept but I feel good on the bike and I hope that the next GP will be better again.” 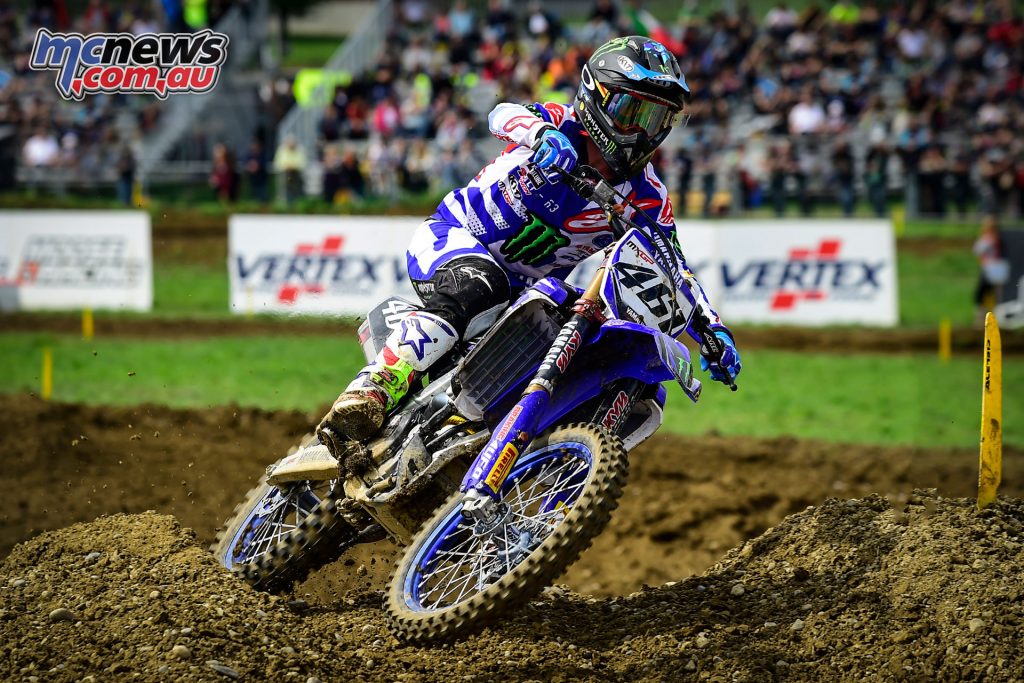 “It’s been a good weekend for me. Getting the holeshot and then going on to finish second in the qualifying race was a good confidence booster. I was feeling good on the bike so was looking forward to the final motos. Getting another great start in moto one I managed to get a good race pace right from the first laps. I spent the first half of the moto pushing hard to pass Arnaud Tonus for the lead but then decided to settle for second and save some energy for moto two. My start wasn’t bad in the second moto but another rider hit neutral in front of me in turn two so I ended up losing a lot of time. Taking the positives out of this GP I got two holeshots and a strong runner-up moto result. This is very positive for the next rounds of the championship.” 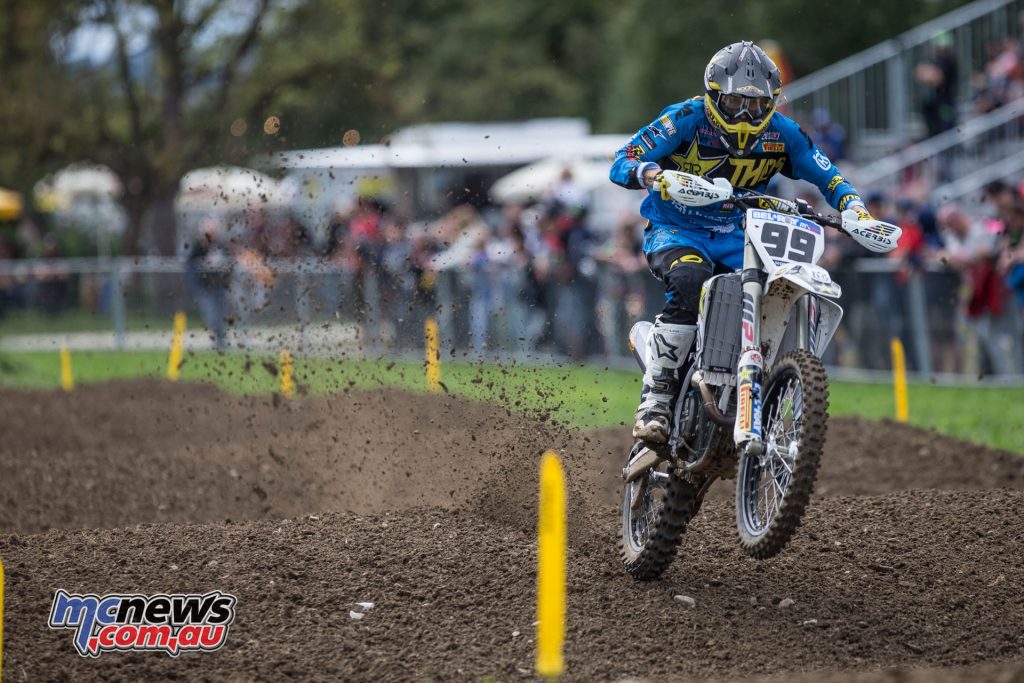 “Racing was not so bad today the speed was good. Yesterday I had bad luck in the qualification race and ended up 32nd so my gate pick was really limited and obviously, this showed today in racing. It is almost impossible to make a good start from getting that result in qualifying. The first race I was a little bit further back because I had a bad start. I had to pass loads of riders and then I came back to seventh. It is not what we want but I still gave it my best and tried to pass as many guys as possible. The second race start was a little bit better but still I had to make many passes to come back and I finished the race in fifth. When I am racing on hard pack, I want more as I know that I have the speed I just need a little bit more luck but I will continue working hard for Sweden next week.”

“It was a tough weekend, but I felt really bad all Saturday, I could not find the right setting with my bike. It was tough the first moto, I had a bad start and finish eighth, which is not where I want to be. In the last moto, I felt like it was really positive that we are moving in the right direction. I finished sixth in Race 2, which is not super good but I feel good about the way I rode and the start and everything. It was good, so I think it’s good to end the weekend on a positive note. Eighth and sixth is not what want, but I am feeling good on the bike so I am confident for the next race.”

“This really isn’t my sort of track if I am honest. I didn’t have such a good feeling here and most of the difficulty came with trying to pass other riders. I didn’t have the greatest starts today and then in both races I crashed. In the first race, I was in sixth with a huge gap behind me so I was feeling comfortable and then I made a small mistake and fell and it cost me that position. The second race was more frustrating as I was battling for sixth place and then I fell in the last lap. It has just not been my weekend but I will work hard this week for Sweden to show the results I am capable of.” 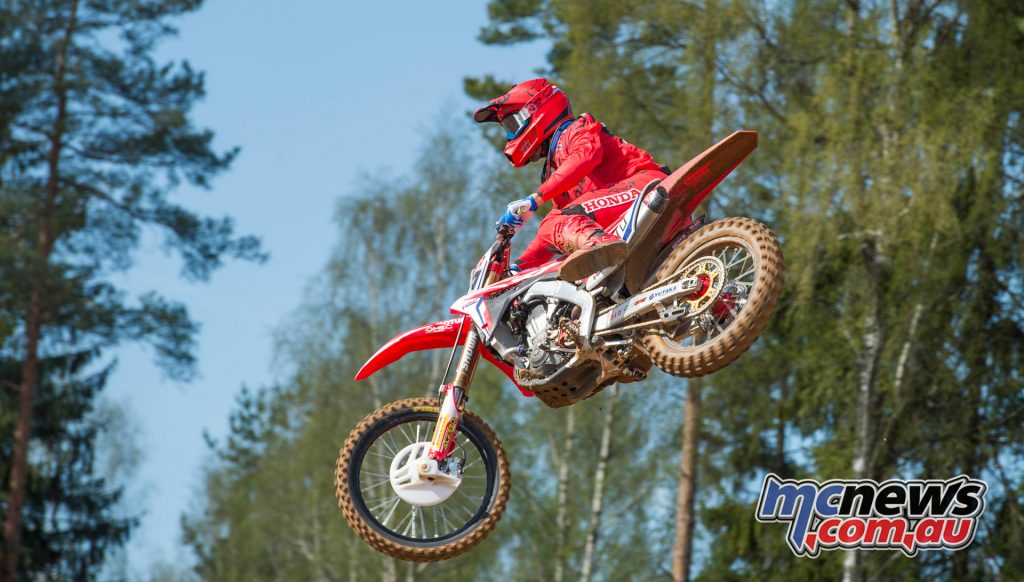 “It was hard to find a good rhythm at this circuit. The weekend started with a downpour on Saturday morning but the track dried up pretty quick. I had a good qualifying race where I finished ninth. Conditions during the final motos were different. I could not get the start I wanted and that made my life a lot harder in both motos. My jumps out of the gate were quite good but I could not keep my speed going into the first corner. My best moment came in the second moto where I found myself battling for the top eight. I made some passes and ended up getting seventh at the chequered flag.” 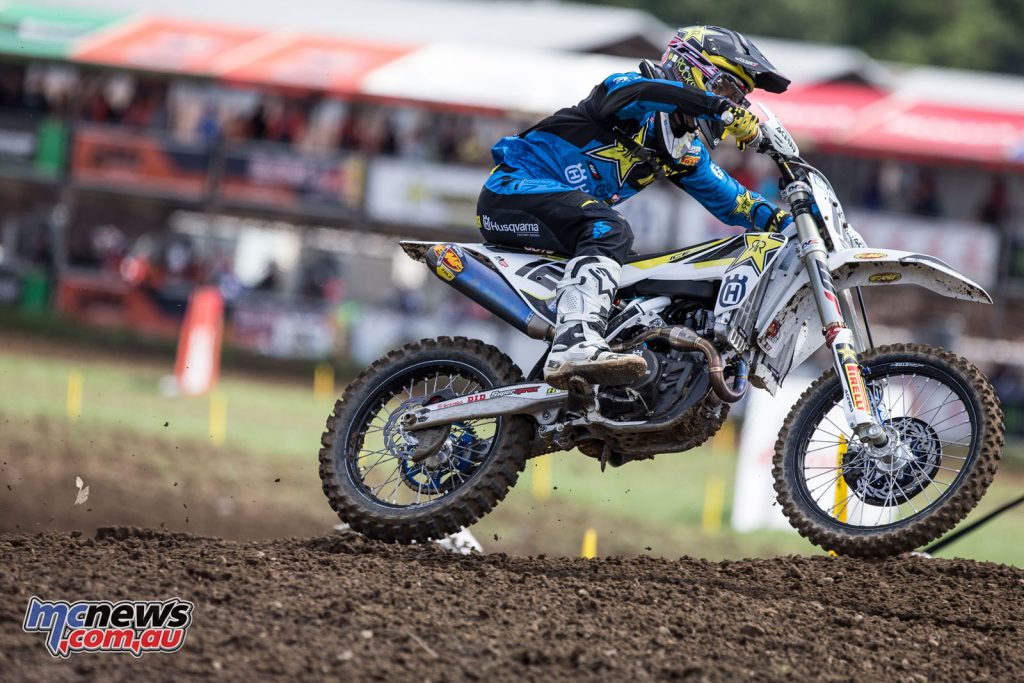