There’s nothing quite like Finke week in Alice Springs, and KTM Australia’s Desert Racing Team will take the time to say hello to a heap of excited race fans right before taking on their loftiest goals yet in this year’s Finke Desert Race.

Fans can hit the trio of KTM aces up for a poster or an autograph, and there will even be limited edition DAKAR merchandise available to purchase.

This weekend however, it will be time for the most successful Australian desert racing team of recent years to get down to business, in the famous 480-kilometre, two-day blast from Alice Springs to Finke and back.

The big news is that Dakar Rally winner Price is aiming to become only the second competitor ever to attempt the “Ironman”; the incredible feat of racing a Trophy Truck and a dirt bike in the same race.

Price plans to drive down to Finke, fly back in a plane, and then ride his powerful KTM500EXC down the same track several hours later to the Sunday overnight stop, before repeating the formula again on the homeward leg on Monday.

On the bike he’ll not only aim for a third consecutive win, but a fifth Finke outright victory which would equal the record of Alice Springs ace Randall Gregory.

His two team mates Simmonds and Walsh will be giving it every last drop to ensure that Price doesn’t achieve his goal, as both are hungry to etch their names on the coveted trophy for the first time.

If either of the three factory KTM riders wins, it will be the seventh Finke Desert race victory for the squad in eight years.

KTM’s combination of innovative design, proven reliability and passion for desert racing is reflected in the entry list for this year’s race, with the 172 KTMs entered exactly double the 86 machines of the next-best represented brand.

Another KTM rider hoping to make his mark in the event will be former pro motocrosser turned off-road racer Jack Simpson, who currently leads the AORC E1 category, and will race a KTM250SX-F in the quarter-litre four-stroke class.

“It definitely hasn’t been the same amount of preparation as previous years but everything feels pretty good. We are going to try and do the ironman, which is over 1000 km of racing in two days. You can’t live in a cotton wool box, and for me I always like challenging myself and I think this is something that is going to push me pretty hard. I might have made it harder to win my fifth Finke and tie Randall’s record, but this chance has come up now and it may not have come up next year. We’ll try our best to compete strongly in both classes. I’m really looking forward to the meet and greet at Desert Edge on Thursday. I enjoy that side of things and it’s always happy to say hello to all the fans who support us with everything we do.”

“I got some bike time yesterday, went down to the 160 mark, and I think we are running our race bikes in tomorrow, so, I’m looking forward to that! Tye and his dad Greg have been here for the last three weeks and it will be good to catch up with the rest of the team and get ready for the race week. I’m looking forward to it. The town is always very busy this time of year and being the local, everyone is wishing you well, saying g’day and whatnot. It’s a nice vibe, sharing stories with all the riders about near misses and whatnot down the track, it’s always good for a laugh.”

“I’m feeling like a local after being up here for a couple of weeks. I get on really well with my teammate David Walsh and he’s really looked after me. I definitely feel a lot better about the race than I did last year, when I had no idea what was coming my way, but this year we feel like we’re definitely a lot further ahead. To be honest I can’t wait to get Prologue done and get racing. I’m looking forward to sticking it to these boys and hopefully being up front. I’m a bit jealous of Toby’s gig this year, but he’s definitely the man for the job. Hopefully he has a good run on the bike …and finishes right behind me! I’m looking forward to the meet and greet; it’s the fans who make the sport what it is and spend countless hours standing out there in the sun, cheering us on and celebrating.”

“In the past I was racing motocross and never had the time or the chance to do Finke, but this is the year to have a crack. I just want to show my colours – that I’m not scared of going fast. The speeds are just crazy fast. I was riding the 500, and you can get up to 180-odd clicks on one of them, and even my 250 does 160kmh. That’s fast. I’ve only ever done 90-100k on a motocross track, and when you’re doing 160 down a corrugated dirt track, your eyes just bounce, but now that I’ve been here a few days, you start to get used to it and you see a lot more. It’s just getting your eye in to the speed of the race – that’s the thing.”

“We’re coming off some good years out here, and we’ve left no stone unturned this year. Toby’s had a little bit of time back on the bike since he tweaked his back and he’s looking fast, as he normally does in the desert.  Tye and Walshy are healthy and looking good, so if we can keep doing what we are doing, we’ll be in a good spot for this. Toby loves having new adventures and if anyone can be un-fazed by racing the bike and the car and get good results in both, it would be him. The race bikes will get their final runs tomorrow and from then on it’s about relaxing. The boys have done the hard yards but they may go out and look at a few sections here or there.” 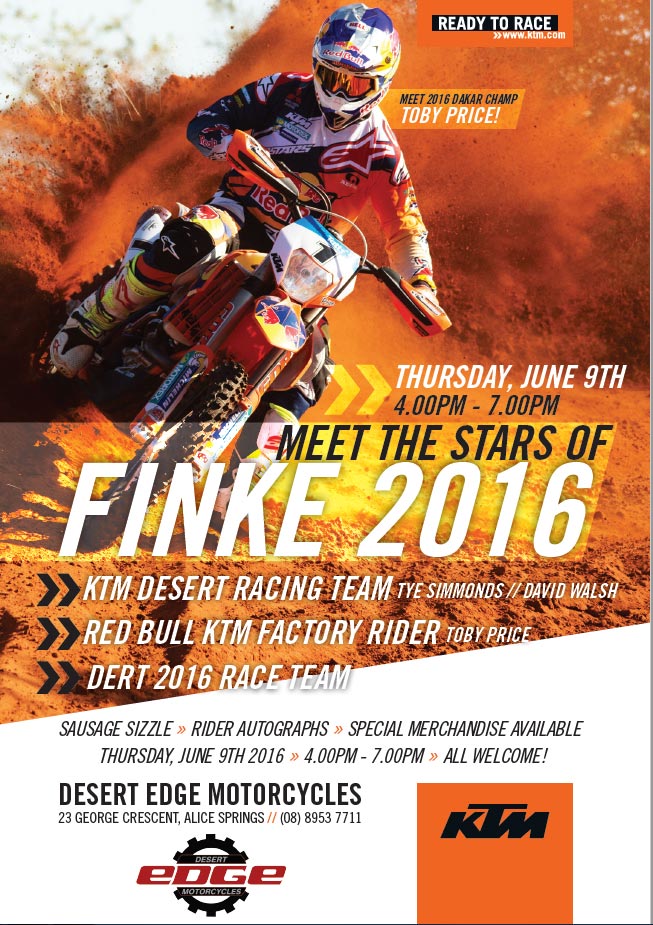 Morgan Park ASBK event cancelled and will not be rescheduled