Following on from the Dutch TT and the German MotoGP, Red Bull KTM MotoGP Factory Racing Team have just completed a two day test in Aragon, Spain, with no less than four riders riding the KTM RC16.

Lead riders Bradley Smith and Pol Espargaro spearheaded the test with KTM test rider Mika Kallio backing them up, however the new rider on the bike was from KTM’s Moto2 line up as Miguel Oliveira had his first taste of what a 260+bhp KTM RC16 MotoGP prototype bike feels like.

“Yes, it was a good two days. The team have worked so hard to do this test because it’s been straight off two races spending a lot of time away from home, especially the guys in the team as they get the tracks before me, so that’s a big job by them – particularly at this test so I’m very grateful for that. We’ve tested a huge number of things thanks to the guys in Austria who’ve worked on the development of the bike enabling us to test different parts so we have improved a lot over day one here in Aragon. Good days. Sure, I had a small crash but you need to find the limit… Yeah; happy with everything as we have done a very good job.” 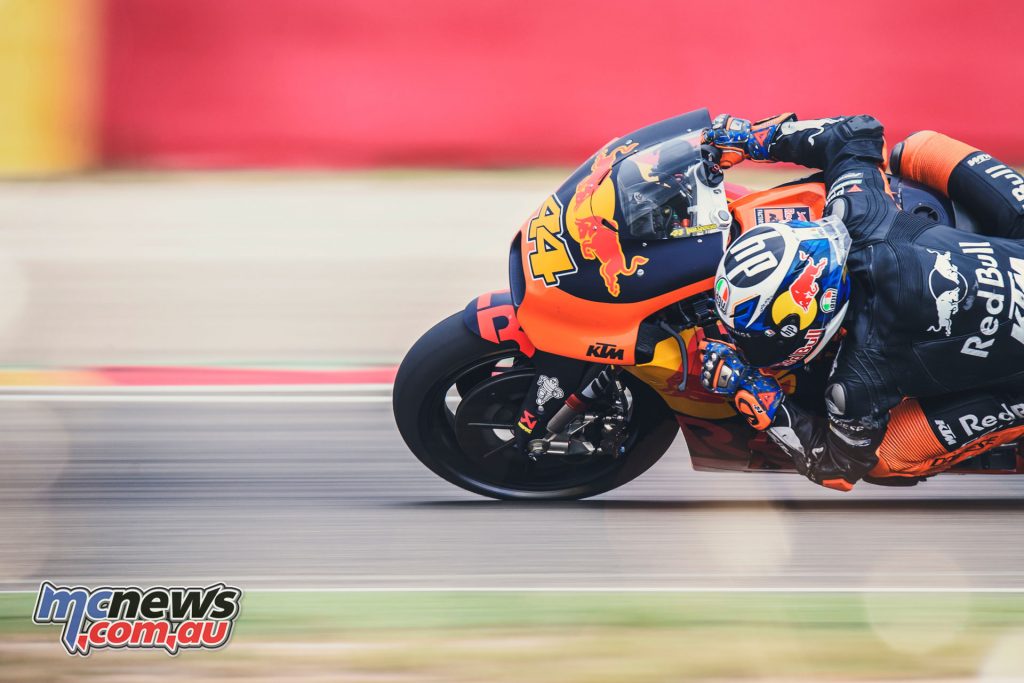 “The great thing is that we had two days here before the summer break. The guys worked extremely hard and we touched on some really important points in our weakest area so from that point of view we are super happy with that work and direction. We ended up being very busy with a great deal of laps to confirm everything, but I really feel this will give the team good direction for the second half of the season, and for 2018 as well, so although we may not see the big picture right now, we will see it in the future. Aragon has been pretty good; the bike seems to work well here so I’m quite looking forward to coming back here at the end of September but there’s still an endless list of things we need to do with this project. All in all I’m happy going into the summer break finding some solutions.” 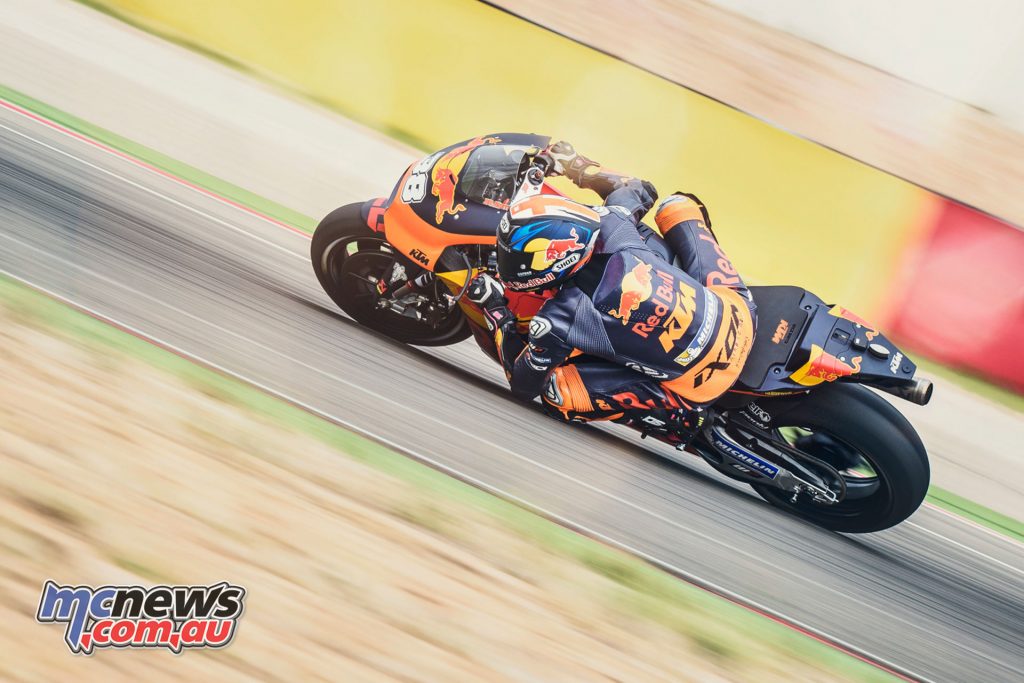 Oliveira is currently third in the Moto2 World Championship with Red Bull KTM Ajo following three podiums already this year from nine races, plus an additional podium after the adjusted Catalan GP results.

“The goal was not that I was to get really fast but it was a test for myself to enjoy the day. I had this opportunity that I think every rider would like to have in his career at least one time but I’m really pleased to have had the chance to try that bike. So all in all it was a very good day to do a few laps and enjoy a MotoGP bike. Thank you KTM.” 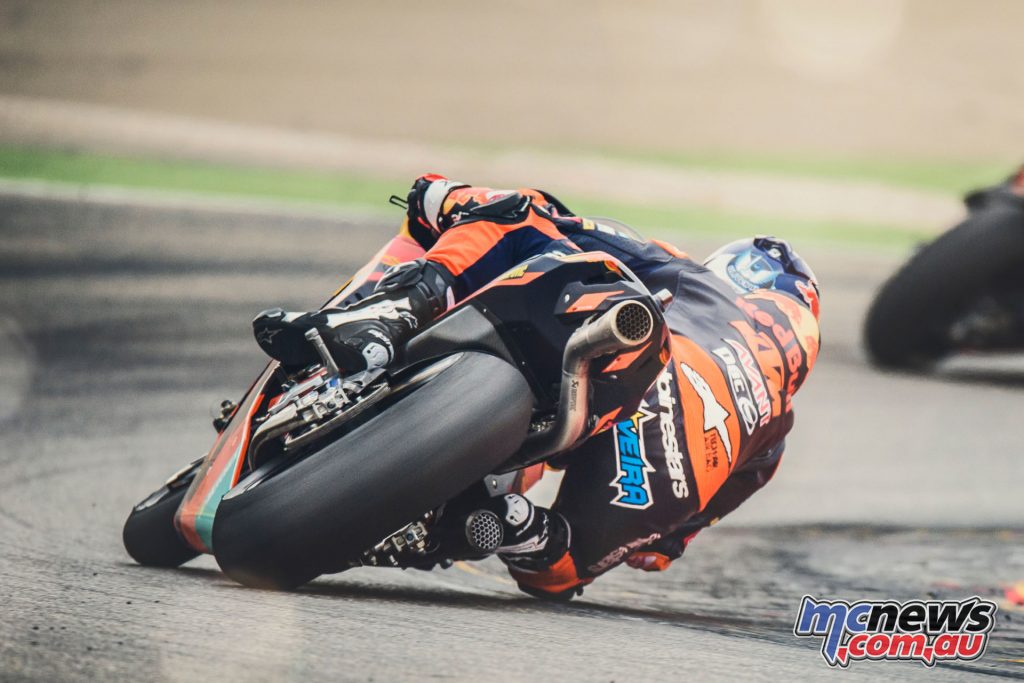 “It’s been a hectic time for everyone. Not only for the race team but for the test team too as we’ve been testing a lot too over the last month, plus the race at Sachsenring and the test here. However these two days here have been the best test days for us so far as we were quite quick here considering it hasn’t been that good for us in the past as it’s a complicated place. Never has the feeling been so good with this project. We tested a new frame that the race team have been using in the last two races and that has been really positive as I like it too, so looking forward to the race in Spielberg that’s a big plus. All those things that we tried we could see the directions and the differences – including the odd negatives – but this is good information for us as this shows us the way forward as at times we have struggled, so this is good. That’s why I’m really satisfied, as are the others, so I believe the second part of the season will be easier for KTM.”

Over two days the team had 16 hours of track time in 35 degree heat with a track temperature of 44 celcius. The only hiccup was Espargaro having a spill on Friday afternoon on the exit of the ‘bus stop’ when on new tyres. He was fine with minimal damage to the bike.

“It was an amazing test as we had a big, big test planned where we touched some areas where we see the bikes have changed, so we now go back to the factory in Austria and look where we can improve for the second part of the season. Moreover, I want to say thank you to each single person who has worked on this project whether in Mattighoffen or in the race or test team as they have spent so much time and effort to get here. The riders have made a big effort too, and we are seeing progress from that as we go forward. It was a great job by all.”

“On the one hand we had new ideas, and on the other we had a very long and intense hardware programme on the chassis side of things and although the weather was not perfect, it was good enough to go through every item. That’s great as now we can go happy to the summer break because we’ve found some stuff that really touched the bike behaviour ‘big time’ in a positive way. We still have to find out how to put it all together and make it work on another track so let’s not be too optimistic, but either way it couldn’t have gone much better here so now we go home with a very good feeling.”

After some wind tunnel test with the GP riders this week the team returns home for a short MotoGP summer break before the resumption of Grands Prix at Brno in the Czech Republic on August 6th.

Riders reflect on tense first day of practice at Aragon