by Trev
in KTM News, Motorcycle News
A A
Share on FacebookShare on TwitterShare

CFMOTO have announced a new relationship with KTM that will see the two organisations work collaboratively to offer the local Chinese motorcycle market a range of KTM motorcycles under the trademark KTMR2R.

Under the terms of the collaboration CFMOTO will be responsible for the distribution of KTM motorcycles in China and will assemble selected models from imported knockdown kits.

The joint announcement was made at the China International Motorcycle Trade Exhibition (CIMA) where KTMR2R showcased a broad range of on and off road KTM motorcycles to the Chinese public.

Speaking at the announcement, KTM CSO Mr. Trunkenpolz said the move into China was a logical next step as the organisation executed its globalisation strategy.

“The rapid development of the Chinese economy is giving rise to a new type of Chinese customer, one who demands product differentiation,” he said.

“KTM has the product to fill this gap in the market and the perfect partner in CFMOTO to see the process through for the long-term.”

Mr. Trunkenpolz also noted success in other emerging markets as a driver for their entry into China.

“KTM is experiencing greater success in emerging markets than we ever thought was possible,” he continued.

“Considering the current economic development of China and how the motorcycle market is maturing here, we feel that this move fits our globalisation strategy right now.”

Also speaking at the announcement, CFMOTO President Mr. Lai commented on the similarities between CFMOTO and KTM.

“Both CFMOTO and KTM emphasize high-end performance motorcycles that form part of the riders lifestyle,” he said.

“With this shared philosophy, CFMOTO and KTM will cooperate to promote the orange brand in China.”

“The Chinese motorcycle market is going through a structural adjustment and the products on offer are being updated as a result.

“The rise of the motorcycle as a lifestyle is upon us, which highlights the need for companies such as CFMOTO and KTM.

“Personally, I have a lot of confidence in this cooperation between CFMOTO and KTM, one is an internationally famous brand, and the other is a local firm that insists on a differentiated development strategy.

“I believe this cooperation will be a breath of fresh air in the Chinese motorcycle market and provide Chinese customers a higher quality product and service,” concluded Mr Li.

With the announcement confirmed just days ago, KTMR2R have already opened stores in Shanghai and Beijing with the full KTMR2R product range expected to be available in store early 2014.

About KTM – KTM was founded in 1953 in Mattighofen, Austria. Since its inception, KTM has won many world championships including a streak of twelve consecutive wins in the world-famous Dakar Rally, which they will defend in 2014. Recently, KTM has stepped into the street bike arena and is encountering success at every corner.

About CFMOTO –
CFMoto manufacturing is based in Hangzhou, China, and the company has been manufacturing power driven products for over 20 years. CFMoto is firmly set on becoming the world’s leading supplier of powersports products, a goal that will be achieved by keeping a constant focus on its core values of continual improvement, innovation and quality. 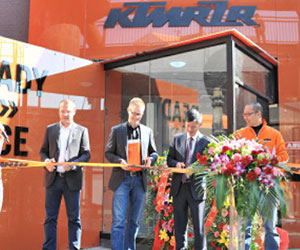 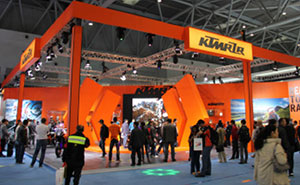