The Portimao round of the Superstock 1000 European Championship proved a challenging one, as 23-year-old Mike Jones from Brisbane set himself up for a late challenge from fourth position, only to have the race red flagged, leaving him with that position.

Jones and teammate Rinaldi got off to a strong start, with Jones in the lead and Rinaldi third at the first corner. When the race was red-flagged, Jones was preparing for the final rush and well within podium contention, in a group of three riders separated by less than a second.

“It was a good weekend for us. Coming off a podium in Germany, to be fast on such a different track is really positive and confirms the steps forward we made with my riding style. We’ve been strong both during practice and the race. I’m a bit disappointed with the way it panned out, as I was racing for the full distance and conserving the tyres. The red flag ruined my strategy a little bit, but both me and the team are going in the right direction and I’m looking forward to Magny Cours.”

The race concluded five laps early due to a red flag, with the victory being taken by Toprak Razgatlioglu (Kawasaki Puccetti Racing), pole man Florian Marino (Pata Yamaha Official STK1000 Team) and Maximilian Scheib (Nuova M2 Racing) were classified in second and third respectively, as the race results were taken from the rider positions at the end of the ninth of 14 scheduled laps.

The red flags were shown due to a technical problem for Marino which saw smoke bellowing from his Yamaha machine at just over two thirds of the race distance.

With two rounds left, Rinaldi and Jones are respectively first (122 points) and fifth (62 points) in the championship. The Aruba.it Racing – Junior Team will resume action at Magny Cours (France) from September 29 to October 1 for the penultimate round of the season.

“We worked hard with the whole team, but unfortunately we couldn’t reap the benefits and we struggled also during the race. I had some issues with the rear, which was sliding a lot. That’s racing sometimes, you don’t always get the rewards you worked for. We need to accept the fact that we had a below-par weekend, and analyse the data to make sure that we don’t experience these issues again. I’m confident, we’ll bounce back at Magny Cours.” 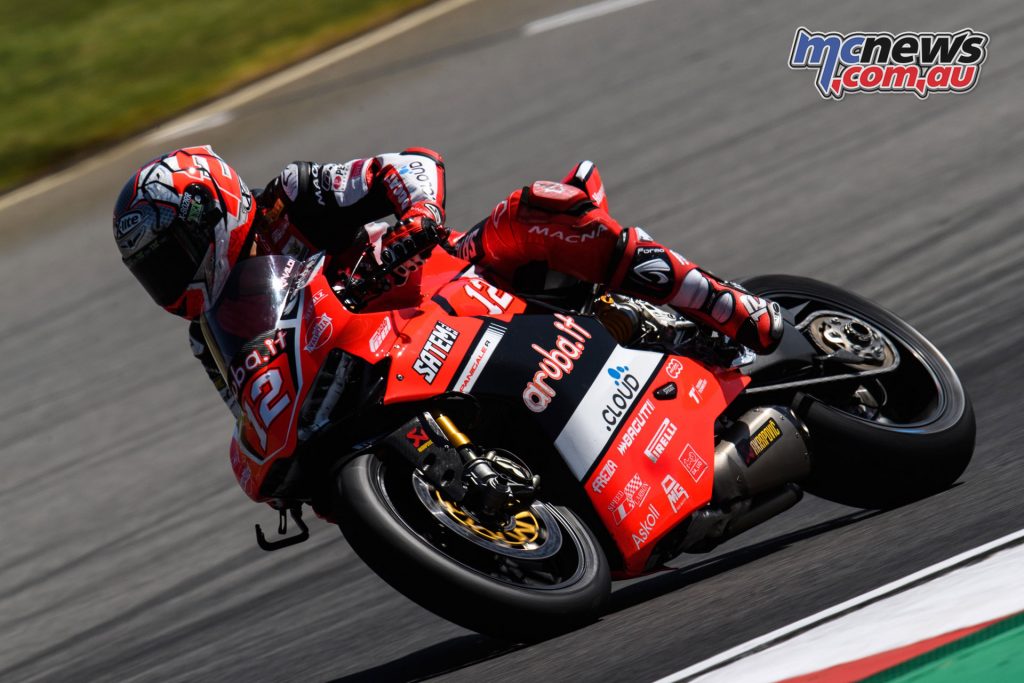 “This weekend was marked by ups and downs. Michael didn’t find the best feeling on this track despite the hard work put in by the whole team, and he was forced to play defence, still managing to maintain the championship lead. Mike confirmed the improvements made during the summer break, fighting constantly for top positions. Unfortunately, the red flags prevented him from playing all his cards in the final rush. We need to keep working and stay focused for the last stretch of the season.”