Johann Zarco (Monster Yamaha Tech 3) took his first ever premier class pole position at the Dutch GP, dueling it out with reigning Champion Marc Marquez (Repsol Honda Team) as the final few seconds ticked down. Marquez crossed the line first and first – but the Frenchman almost immediately hit back to take his first MotoGP pole on his final lap. 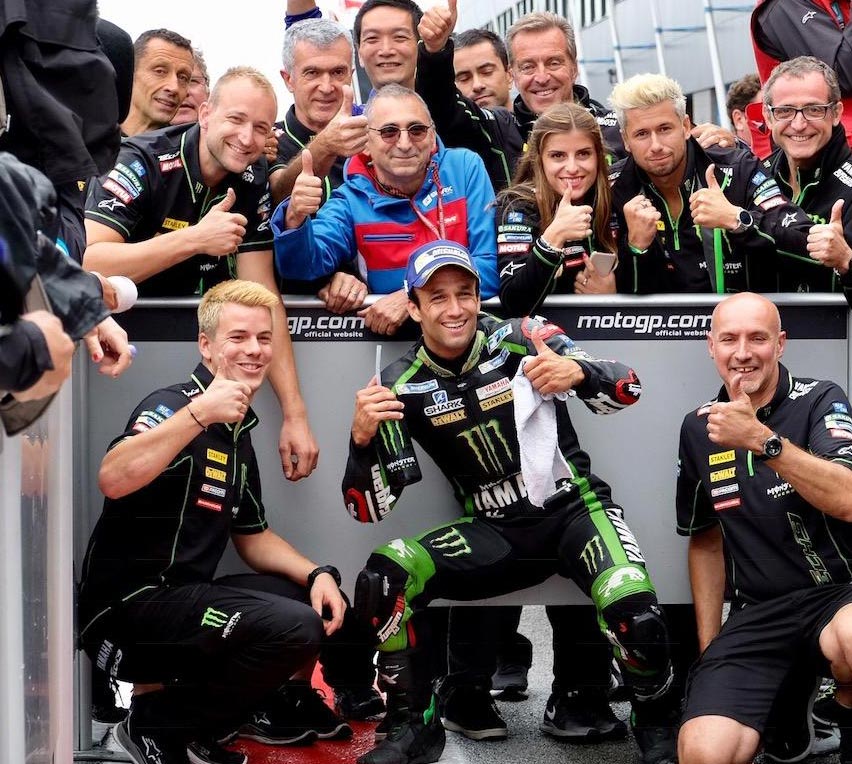 “Pole position is a great thing and when you see your name on top of the time sheets, it is an awesome feeling. Today it rained for almost the entire day, but in FP4 it was more or less dry, and then suddenly there was a downpour. At this time, I decided to stay out on the track in order to understand the conditions and to collect as much information as possible in order to give me a good chance in the qualifying. Then, in Q2, the track started to dry a little bit and I like this kind of situation so I realised that I could make a difference. I pushed on the last lap, plus I felt strong and in the end, everything went so well. 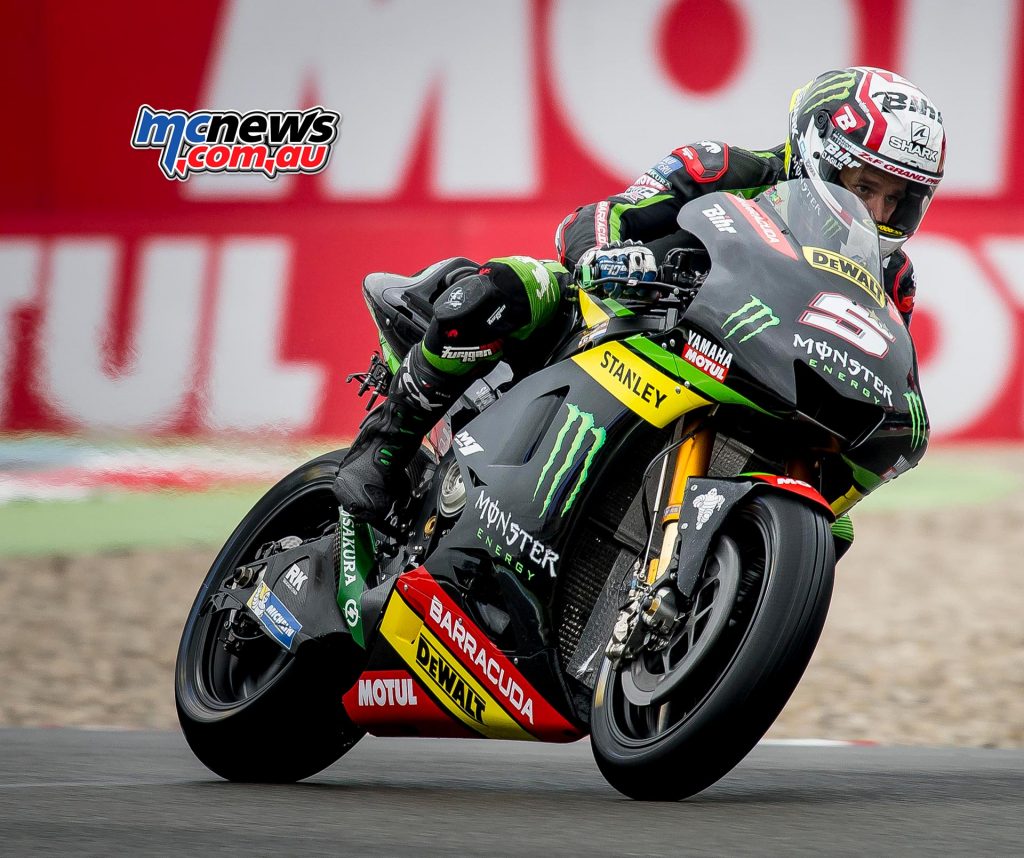 “I am happy and I know that I need to use this opportunity tomorrow to try and get a podium, which is my target. I think I am ready for any weather condition because I was solid on Friday in the dry and also in the wet, I feel comfortable. Either way, it should be cold so I can use the soft tyre and that will be beneficial. I said on Thursday that starting from the first two rows is important so that I can fight for the podium, and I will start from pole which is the biggest advantage so let’s see what happens.” 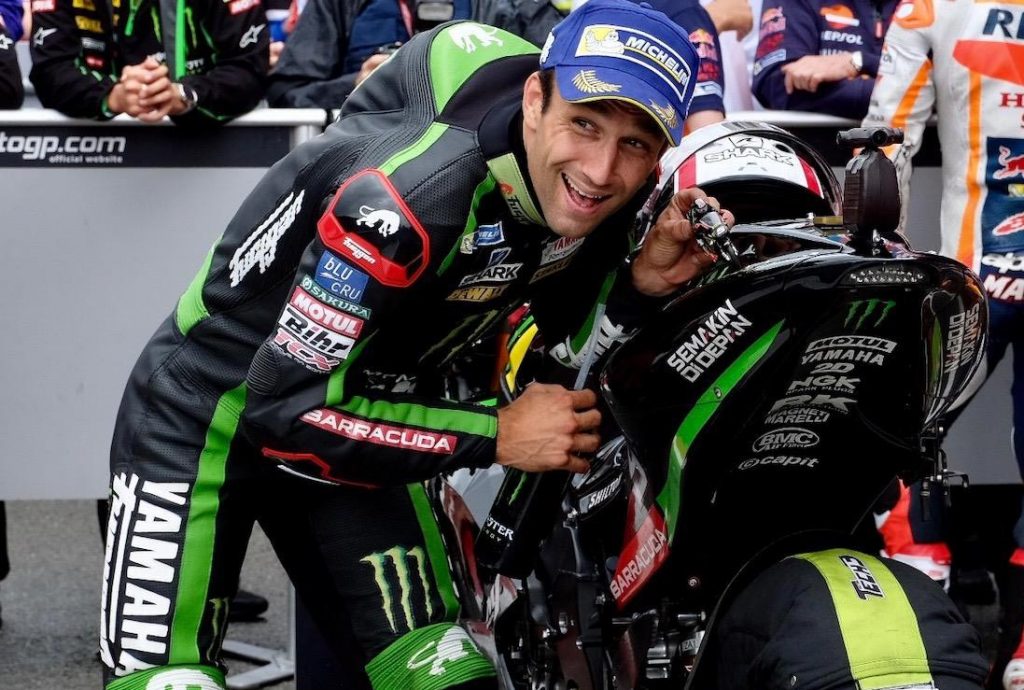 Zarco’s Assen heroics also make it the first French pole since Olivier Jacque in 2002. Another superstar in the battle was Danilo Petrucci (Octo Pramac Racing), who followed up his first ever front row in the Catalan GP by repeating the feat in the Netherlands in very different conditions.

Valentino Rossi (Movistar Yamaha MotoGP) looked a contender for the top spot until his final sector, and although missing out the ‘Doctor’ will head the second row and has good scope to attack.

“It‘s a shame I didn‘t get front row, but it‘s very important for the race to start from within the top-5. I‘m in fourth position and that‘s a good place and it was also a positive day because I was always competitive from this morning and I feel good with the bike. We had two practice sessions that were more or less fully wet, so we could work on the new chassis. This was very important to understand if we can be competitive, and the feeling was quite positive. Now we have to await the weather and the conditions. Here in Assen it‘s always a big surprise. We hope for either a full dry or a full wet race.” 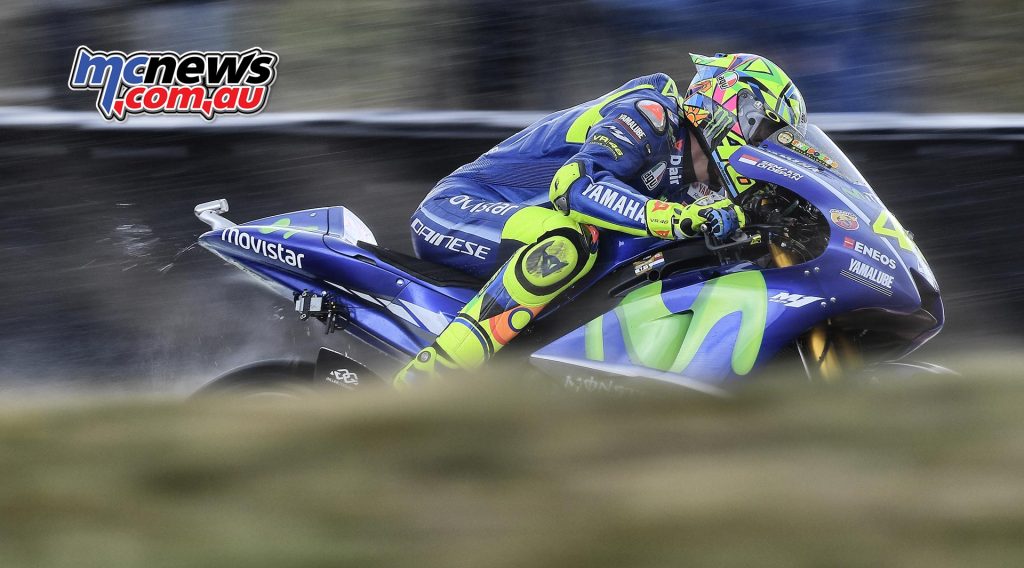 Scott Redding (Octo Pramac Racing) starts a season-best fifth after graduating from Q1 and topping FP3, and Jonas Folger (Monster Yamaha Tech 3) completes Row 2 in another impressive session from another rider with a reputation for excellence in the rain

“I am really happy with this result because, to be honest, I was a little bit nervous about how the qualifying would go. At the beginning of the day, when it was raining, I didn’t feel fully confident on the bike and as a result, when we knew that it would be wet in Q2, I got slightly worried. However, in the end, we made a few adjustments and improved the feeling that I had on the bike. On my last lap, I was set quite a good time that got me into the top six. This is my best qualifying performance so far, which is really positive. It looks like it could be a dry race tomorrow and this is what we are hoping for because I have a good pace in the dry and we have set some encouraging lap times. Nevertheless, it doesn’t matter too much about what comes, because I think that we are ready for anything.” 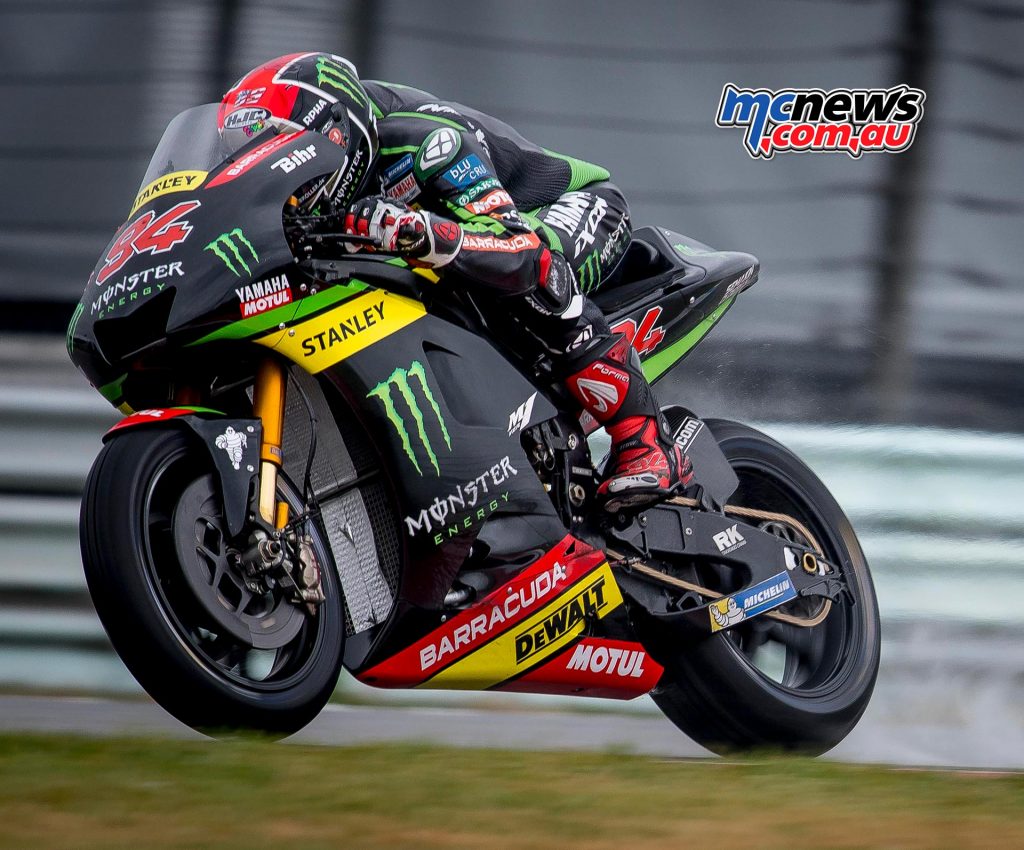 Alvaro Bautista (Pull&Bear Aspar Team) crossed the line in P7 for his best QP of the season ahead of LCR Honda’s Cal Crutchlow, with Andrea Dovizioso (Ducati Team) completing the third row after suffering a crash in QP.

Sam Lowes (Aprilia Racing Team Gresini) made the most of his first ever Q2 appearance, taking a top ten start to head up Row 4 – and ahead of Championship leader Maverick Viñales (Movistar Yamaha MotoGP).

Dani Pedrosa (Repsol Honda Team) starts from P12 after a more difficult day in the rain.

Those not making it through to that Q2 session decided the rest of the grid, with 2016 Assen winner Jack Miller (EG 0,0 Marc VDS), Loris Baz (Reale Avintia Racing) and Aleix Espargaro (Aprilia Racing Team Gresini) locking out the fastest fifteen.

Despite wet track pace the Australian rain master does not want a repeat of the rain showers that hit today’s qualifying in advance of the 26-lap race. The flowing 4.5km Assen circuit is one of Miller’s favourites and despite his impressive 2016 performance he is eager to show that he can be a competitive force in dry conditions.

“I was struggling for grip with the wet weather tyres, no support at the rear at all but we are working hard to find a strong set-up for the race. I’m hoping for good weather because I have a really good pace in the dry and I like this track and the flowing layout. It’s going to be a long race and I’m really keen to show what I am capable of in dry conditions and go for a strong top ten result.” 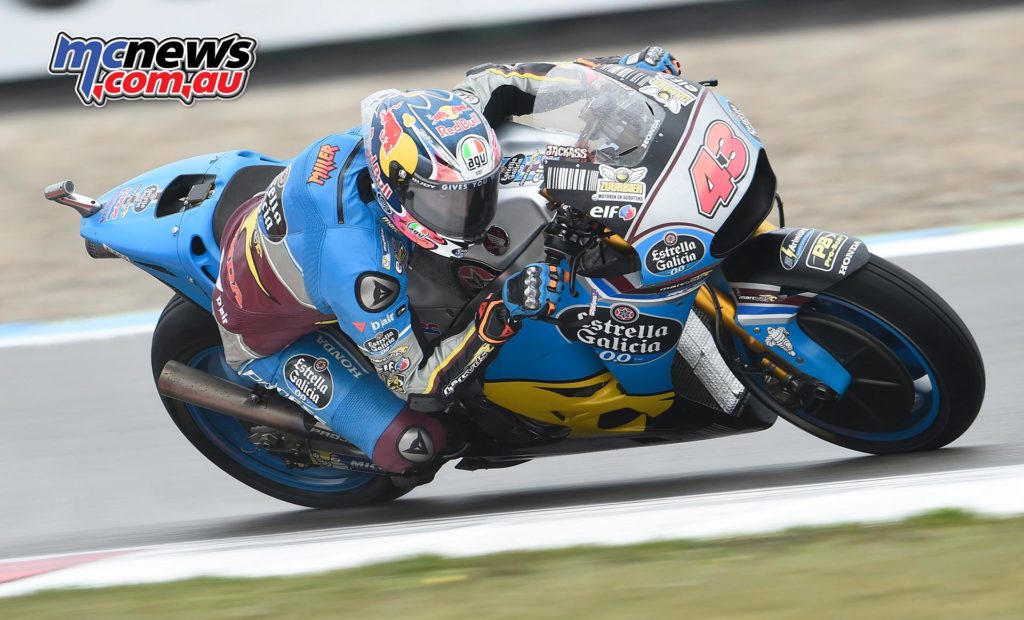 The MotoGP race gets underway on Sunday at the slightly earlier hour of 2100 AEST, with Zarco primed for a podium charge from pole.

The session began with some doubt about tyre choice as the track conditions continued to improve after earlier rain, with slicks then proving the correct choice. Track action was interrupted soon after by a crash for Lorenzo Baldassarri (Forward Racing Team) that brought out the Red Flag. The Italian is conscious and stable, and now set to stay in hospital for observation.

With the track then having had more time to dry, the times tumbled upon the restart. One rider to see a huge leap forward in the drier conditions was Miguel Oliveira (Red Bull KTM Ajo), who heads up the second row, ahead of a scintillating final lap push for top rookie Fabio Quartararo (Pons HP 40). Xavier Simeon (Tasca Racing Scuderia Moto2) completes Row 2, keeping his positive pace at the Dutch GP rolling.

Mattia Pasini (Italtrans Racing Team) staged the best comeback of the session as the veteran Italian crashed – twice, found himself almost last on the grid and then swept back to take seventh. Alex Marquez (EG 0,0 Marc VDS) suffered some slightly different fortunes as he crashed at Turn 9 after setting two red sectors – rider ok – and just got out for one more lap at the end of the session, unable to move up and therefore starting P8. Marcel Schrötter (Dynavolt Intact GP) and Axel Pons (RW Racing GP) locked out the top ten.

“I am focused and I will give it my all tomorrow, but I can’t hide my disappointment about the qualifying. Ultimately, I just couldn’t get the third sector right, and I think that our potential was much higher than the outcome. However, we just couldn’t quite pull off the lap today. We still have a good pace for the race, but of course, it will be a challenge as we are starting from 21st. Nevertheless, I will do my best and hopefully, we can finish in a good way.”

Jorge Martin (Del Conca Gresini Moto3) is earning a reputation in 2017 as the polesetter in all but two of the races so far – and the Motul TT Assen is not one of the exceptions. The Spaniard sliced through the difficult, wet conditions of qualifying to flatten the field by eight tenths – breaking some home hearts as he pushed Bo Bendsneyder (Red Bull KTM Ajo) off provisional pole. Nevertheless, the Dutchman flew and will start second at his home race after an impressive day of track action on Saturday. Completing the front row is Sky Racing Team VR46 rider Nicolo Bulega, who showed his huge progress in the rain once again.

Nakarin Atiratphuvapat (Honda Team Asia) was another star performer in both FP3 and qualifying, and the Thai rider secured his best ever starting position as he heads the second row. CIP rider Marco Bezzechi was another who impressed in P5, with Aron Canet (Estrella Galicia 0,0) completing the second row in sixth.

There were a number of crashes in the session including an out-of-character off for Championship leader Joan Mir (Leopard Racing) that leaves the Majorcan lining up in P7, ahead of rookie Tony Arbolino (SIC58 Squadra Corse) putting in a stunner in eighth. Manuel Pagliani (CIP) completes row three – another impressive performer in a shuffled session. Tatsuki Suzuki’s FP3 pace remained in qualifying, and the SIC58 Squadra Corse rider locks out the top ten.

Morbidelli to join Marc VDS in premier class in 2018