With five races remaining, Andrea Dovizioso is tied on points with Marc Márquez

Ahead of lights out for the first practice sessions on Friday at the Gran Premio Movistar de Aragon, the riders sat down for the pre-event Press Conference to talk about the title fight and the race weekend ahead – as well as the biggest headline on Thursday as Valentino Rossi (Movistar Yamaha MotoGP) was passed fit to try and compete in the race weekend.

First to speak was Marquez, who talked through the race weekend – but also highlighted the importance of avoiding mistakes as the clock continues its countdown to Valencia.

“The battle is on fire. Five races to go, equal points with Dovi and also Viñales is very close. Valentino has come back, Dani is not far – we’ll keep pushing to the end but at the moment we’re at Aragon, one of my favourites circuits so we’ll see how we can manage the situation throughout the weekend. We’ll try to fight for the victory on Sunday. It looks like the forecast for tomorrow isn’t the best but then good on Saturday and Sunday. The good thing for me is that I’ve felt good on the bike at different circuits and in different conditions. We’ll try to push but not make mistakes, because to make a mistake now would be a disaster.” 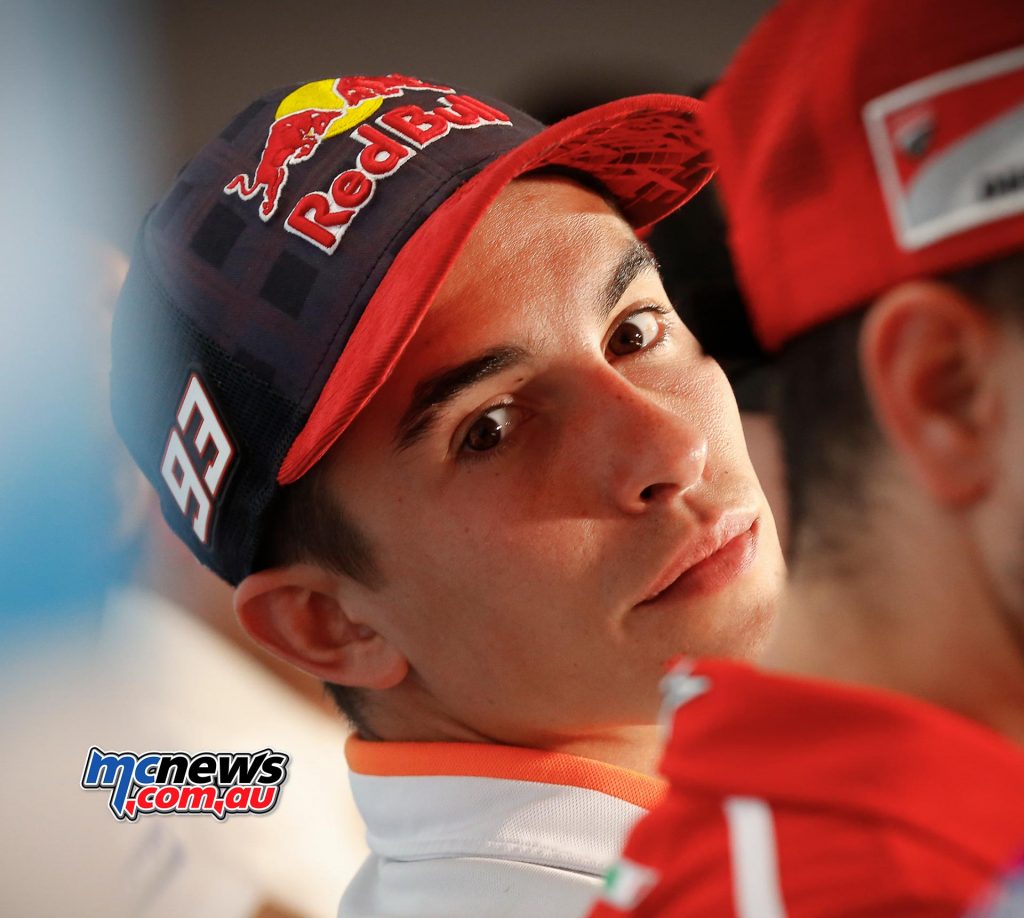 Dovizioso, who has four wins so far this season to equal Marquez’ count, also had some fighting talk about the title – but is ready to take it as it comes and give it 100%

“In some races we didn’t expect to be competitive and had a great race. I’m relaxed to see tomorrow morning what level we can be at this track. Last year it was a disaster but in the practices I felt good. This race last year was the first one where we changed the balance of the bike and from then on we felt much better. We have question marks but I believe we can be competitive. They are strong here but we have our card. It’s not just about the Championship. When you feel good it’s important to push but when you don’t, it would have been stupid for me to try and do that in Misano when I didn’t feel so good on the bike. That’s why I decided to not push – not because I was thinking too much about the Championship. MotorLand is a really nice circuit, not the best for my riding style but in this Championship that’s not so important – it’s important how you work with the tyres and the bike. I’m ready to fight. It will be hard but we’re here, and we’ll try.” 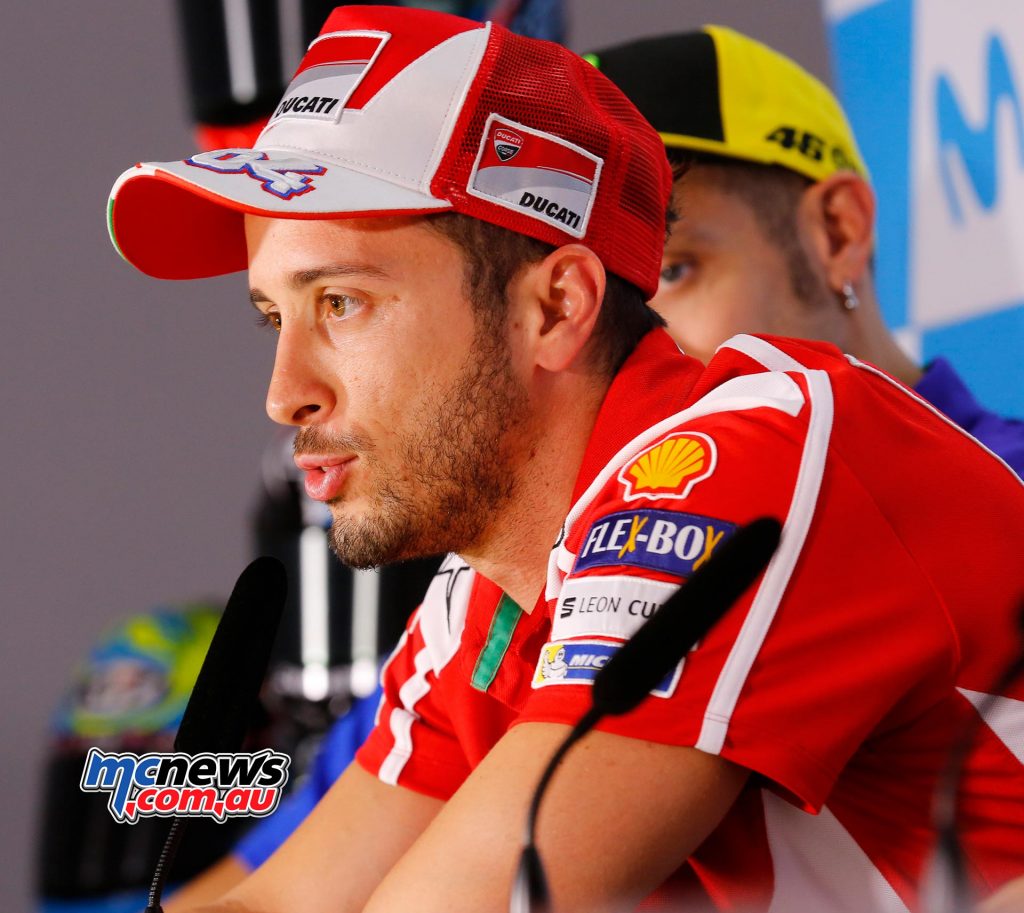 The man in third is the man looking to make up the most ground as well as avoid a mistake. Viñales, another home hero, cited his riding style as something that could make a difference – and is convinced it will be a good weekend

“It’s very close and it will be until the last race. The battle is always good and that’s why the gap is so close. In Misano we made a good step and did the best we have in the rain. Here we have to concentrate. In the dry there I was feeling great, the bike is working well and we have to give the maximum. Last year I felt really good here and at the beginning of the race I felt good. Aragon is good for me and my riding style and that means we should have a good weekend.” 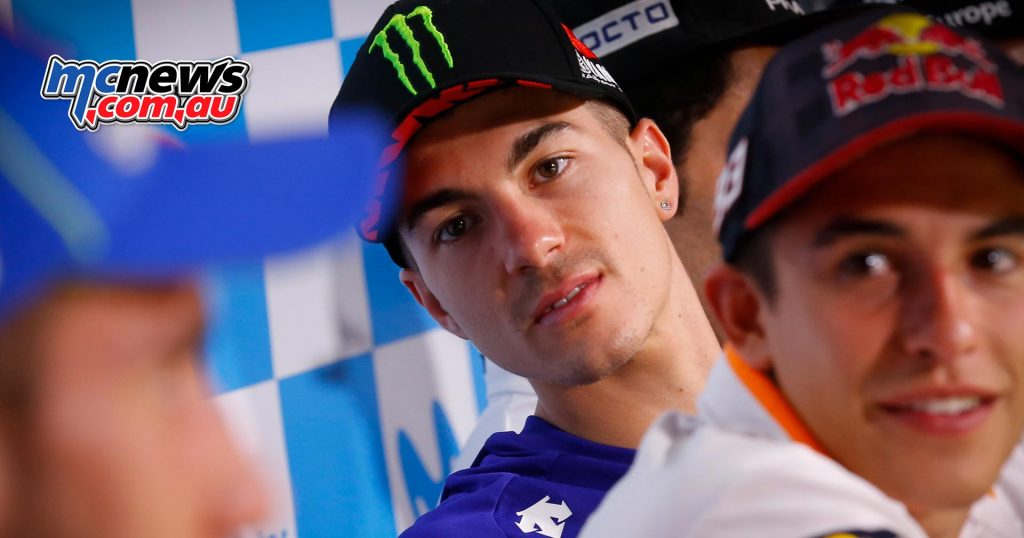 Next talk turned away from the Championship a little, as Valentino Rossi returned to the paddock and was passed fit to try and ride in the Aragon GP. The nine-time World Champion is upbeat, and intends to give it his best shot.

“First of all I’m happy to try. I need to understand the feeling with the MotoGP bike because it’s a bit different. In general I feel quite good, not too much pain and getting back there every day. I tried some laps in Misano and there was a bit of pain but I can ride. We’ll wait for tomorrow and try and understand if it’s possible to ride the bike at a good level. This race is also really important to try and improve for the next three races and getting back at a good level earlier. We need to understand what’s happening with the leg from Friday to Sunday. Every time it’s different. It’s depends on the type of fracture, and I was lucky because I had a very good doctor for the operation. At first my mind was on Motegi but day by day I’ve improved a lot, and I’ve worked a lot to have good power and less pain. I think it’s important to come back on the bike as quickly as possible and not to spend another race at home – so I’ll try.”

Next up was Danilo Petrucci, who took another stunning podium last time out at Misano. He has little to lose in the title fight, but is still focused on the points – and catching Johann Zarco (Monster Yamaha Tech 3) in the battle to be top Independent Team rider this season/

“It’s always difficult to get on the podium and be in front, but we have nothing to lose and we aren’t fighting for the Championship so I don’t have a lot of pressure. At the moment my only target is to stay ahead of Johann to be the best Independent Team rider. We have five races and by this point of the Championship we’re quite happy. We know our bike is quite good at all circuits, and here is a track I like but my only problem is saving the rear tyre, as always. It will be critical but we were competitive in Misano so why not here. It’s positive for us and especially because it’s a race before three races in a row.”

Another man with an impressive result last time out was Alex Rins, who took his best position yet and was back in the top ten after some injury struggles earlier in the season. From very close to the MotorLand track, he’s one rider for whom the Aragon GP really is a home event.

“It’s a great thing to be at a home GP on the MotoGP bike. I’m excited to start because I’ve ridden the track a lot when I was young, and my family’s village is very close to here. I’m happy to be part of the race and I’ll give my maximum. Coming from Misano where I had my best result in MotoGP, I’ll try to repeat that or try and make a small step towards the front. We are always making steps towards the front and that’s important because this season I’ve struggled a lot with fractures but step by step I’m getting experience. This weekend I have a special helmet, we decided to make it pink and it’s to raise awareness of breast cancer.”

Now it’s time to ride, and fight for another 25 points. Every race is worth the same, but some races have a little more at stake. One thing is for certain as the two men at the top stand equal on points and wins, and that’s that MotorLand could see everything get a shakeup.