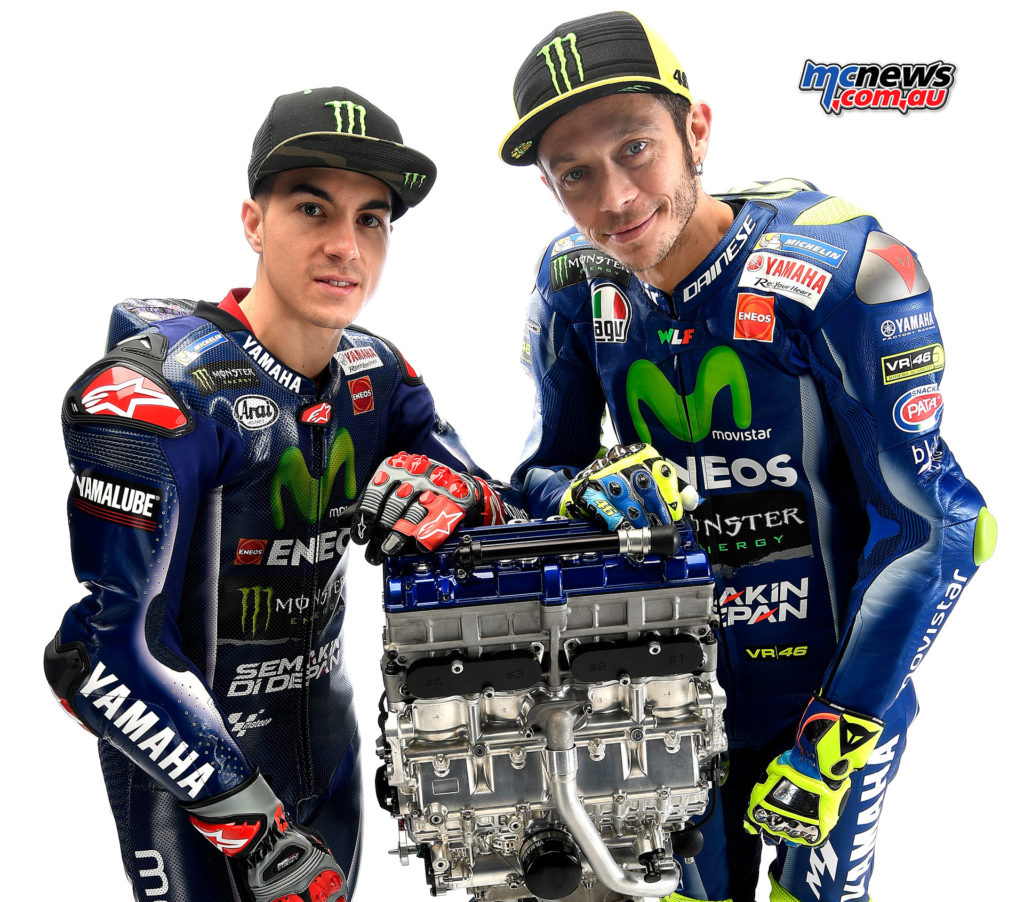 Overnight the Movistar Yamaha MotoGP Team gave racing fans from all over the world a first glimpse of its team colours for the new season during the official team launch at Telefónica‘s headquarters in Madrid, to kick-start their 2017 campaign.

The Italy-based team travelled to Madrid in the last week of its ’winter break‘ before heading overseas for the first official IRTA MotoGP pre-season test of 2017 in Sepang. During this on-track outing, Movistar Yamaha MotoGP riders Valentino Rossi and Maverick Viñales will help Yamaha‘s engineers fine-tune the development work of the YZR-M1 that was carried through during the “off-season”. The Valencia test already showed great promise for this formidable team; all members are eager to reclaim the MotoGP World Championship crown. 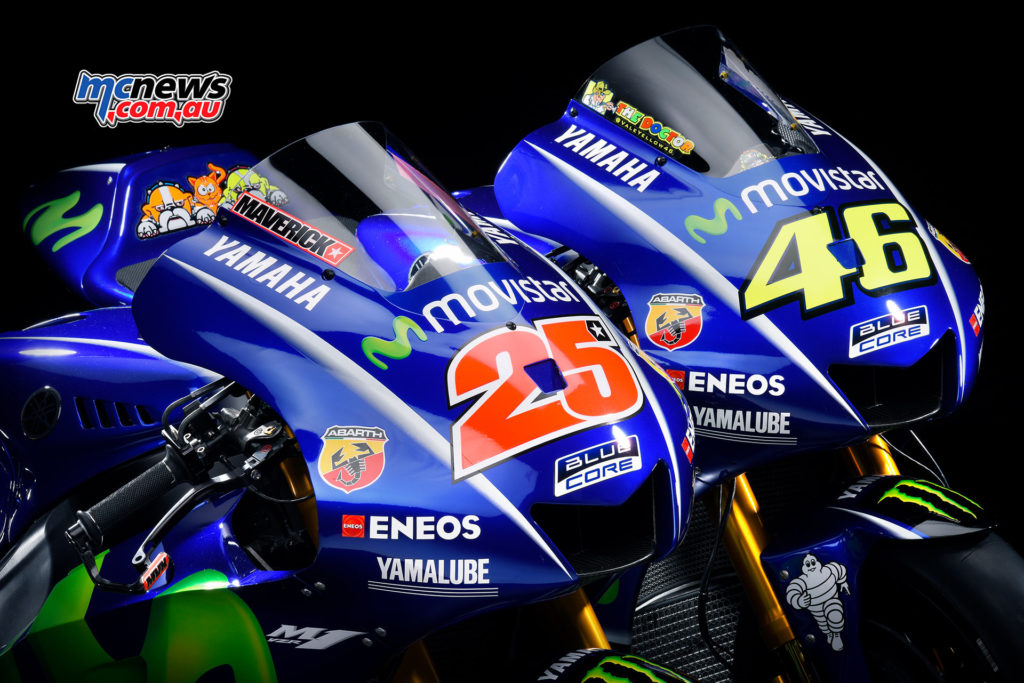 Nine-time World Champion Valentino Rossi impressed chasing the premier class trophy in the last three years, securing the Vice-Champion Title every season. He is determined to compete once more at the front this year and his fans from all over the world will be cheering him on as he pursues his quest to make his title win tally a nice round ten.

Last year Rossi meant business right from the start of the season and in Argentina he climbed the rostrum for the first time. Though struck by external circumstances on occasion, ’The Doctor‘ never lessened his attack and went on to secure nine further podium finishes, with wins in Jerez and Catalunya, remaining a key protagonist in the 2016 challenge until the overseas leg at the end of the year. His and his teammate‘s consistent drive brought Yamaha its seventh FIM MotoGP Team Title.

“After the winter break, the team launch is always a very exciting time for everybody, not only for us, the riders and the team, but also for the fans. Sincerely, I‘m just as happy as they are to start the new season, I have missed riding my bike. The pre-season test in Sepang will be an interesting moment, we will get a good idea of our level and it‘s also the first time I‘ll get to take the YZR-M1 out on track in its 2017 colours. This is the fourth year that Movistar will be our team‘s title sponsor. In the last three years, we enjoyed some fantastic battles and great results and this season the target remains the same: to be competitive again and fight for the victory in every race. I have a new strong teammate and I think we can have a lot of fun this season.” 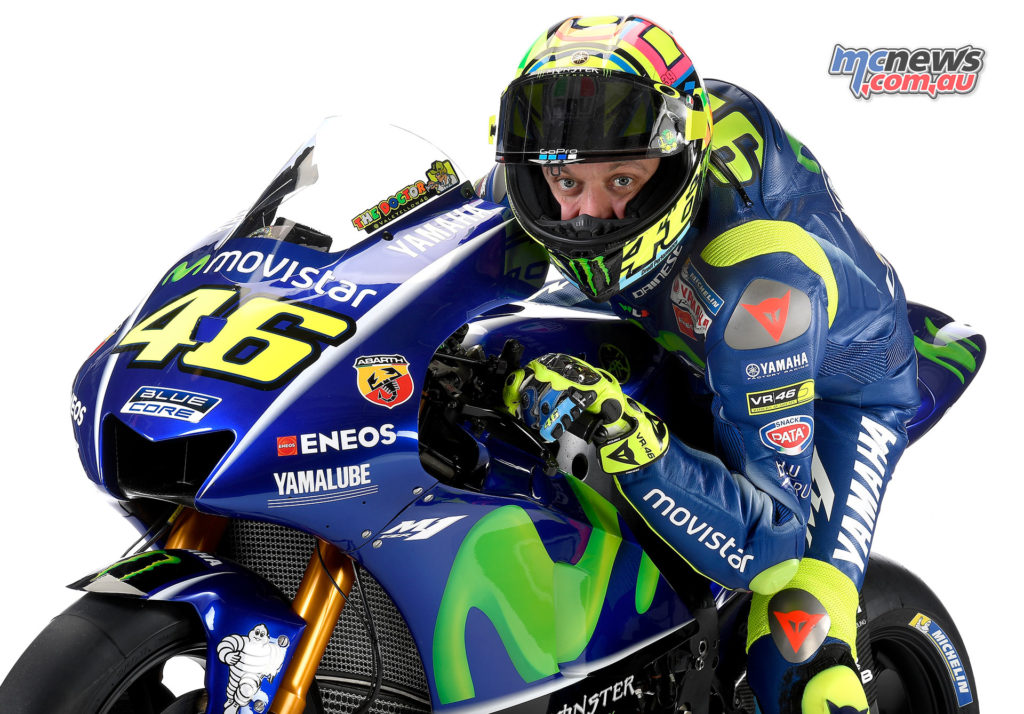 Young Spanish talent Maverick Viñales is a fresh face in the Movistar Yamaha MotoGP Team. He joins the Factory crew after gaining two years of experience in the premier class. His 2016 season highlights included a superb win at Silverstone and three third places, in France, Japan and Australia, allowing him to finish fourth in the final standing. He followed up his strong end of the season with a stunning debut on the YZR-M1 at the Valencia test, topping the time sheets both days, establishing that his switch to Yamaha was the right decision.

It‘s not only the new rider line-up that‘s cause for celebration, Yamaha Factory Racing and Spanish telecommunications giant Telefónica‘s collaboration also deserves recognition. The two companies signed a five-year partnership agreement in the premier class of road racing in 2014, underlined with Movistar becoming the team‘s title sponsor. In the past three years Yamaha and Telefónica‘s shared values and passion for innovation laid the groundwork for success, resulting in a Triple Crown in 2015 and the Team‘s Title in 2016.

“After the test in Valencia and Malaysia I got off the bike feeling very happy because I was on the level I wanted to be at. The whole Movistar Yamaha MotoGP Team can‘t wait to start the season because we know we can be at a 100% level and compete at the front. Today we revealed the bike and it looks beautiful, I wish I could start riding it right now! When I was a kid, I used to watch Valentino riding his M1 and now I‘m here at the team launch, it‘s like a dream come true! I‘m so happy and motivated and I‘m ready to give it my all. I want to thank Yamaha, Movistar and of course the team. They have welcomed me very warmly, so it is a great start to the season already. Honestly speaking, I was quite surprised by the family-feel, because on the outside you see a very serious and professional team, but as soon as I went inside the box I felt incredible. I‘m really pleased to be here, at Telefónica Headquarters in Madrid, and thanks to everyone for coming to support us. It‘s going to be a great year!” 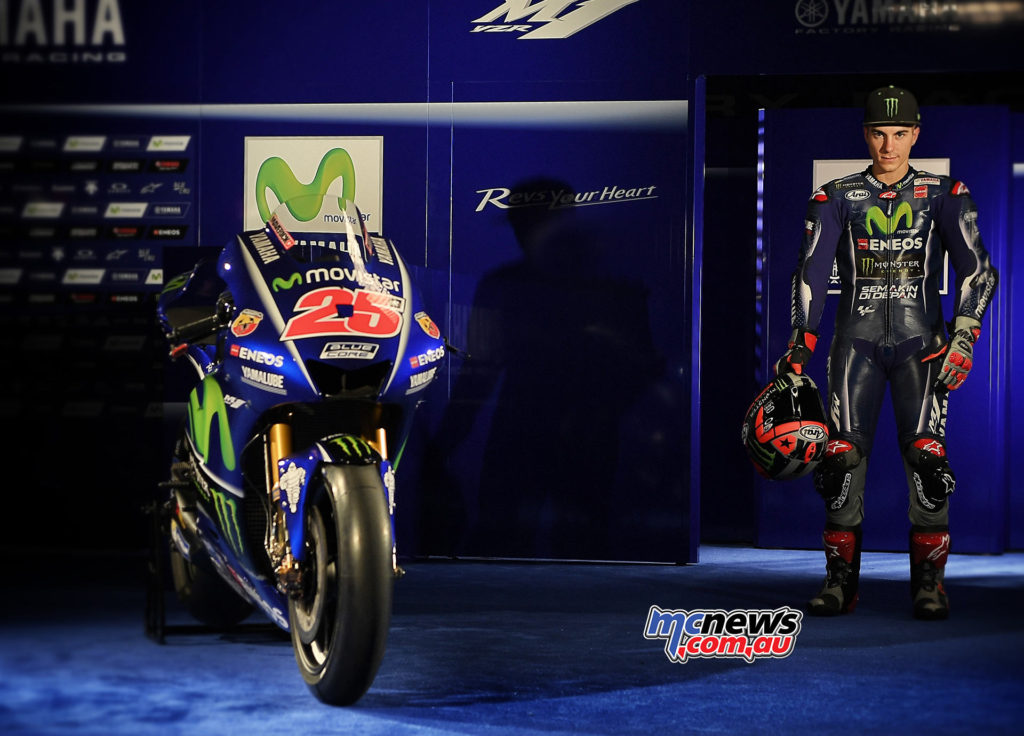 Presenting the 2017 team were MotoGP‘s Dylan Gray and Izaskun Ruiz, who welcomed to the stage Valentino Rossi and Maverick Viñales for a Q&A session. They were later joined by General Manager of Motorsports Division & YMC MotoGP Group Leader, Kouichi Tsuji, Managing Director of Yamaha Motor Racing, Lin Jarvis, and Movistar Yamaha MotoGP‘s Team Director, Massimo Meregalli, who went into detail on the technical development of the bike as well as the new rider line-up and its promising prospects.

“Over the last three years we have demonstrated that our team is very competitive and our partnership with Movistar has delivered great results on and off the track. Movistar and Yamaha are both brands that have a lot of history in the MotoGP World Championship and we are proud that our collaboration is growing stronger each season. It therefore seemed no more than fitting to present the 2017 YZR-M1 at the home of Movistar, the Distrito Telefónica in Madrid. The bike‘s striking new livery features cleaner lines, more blue and a very strong Movistar branding on the fairing. We also unveiled the new enhanced Movistar Yamaha MotoGP team logo symbolizing the partnership between our two companies. We see today not only as the official start of the 2017 season but also the start of a next chapter with our exciting new rider line-up; it is a new beginning and so Movistar‘s slogan “We Choose to Make History” is certainly very fitting and one we will strive to live up to. We have Maverick Viñales joining us as he searches for his first MotoGP class title and Valentino Rossi, who has his eyes set on World Championship title number ten. Both are eager to reach their goals and hungry to win races and most of all have good battles at the front of the pack. With their dedication and the commitment of our engineers and team staff, I‘m confident we are in for another exciting and highly competitive season.” 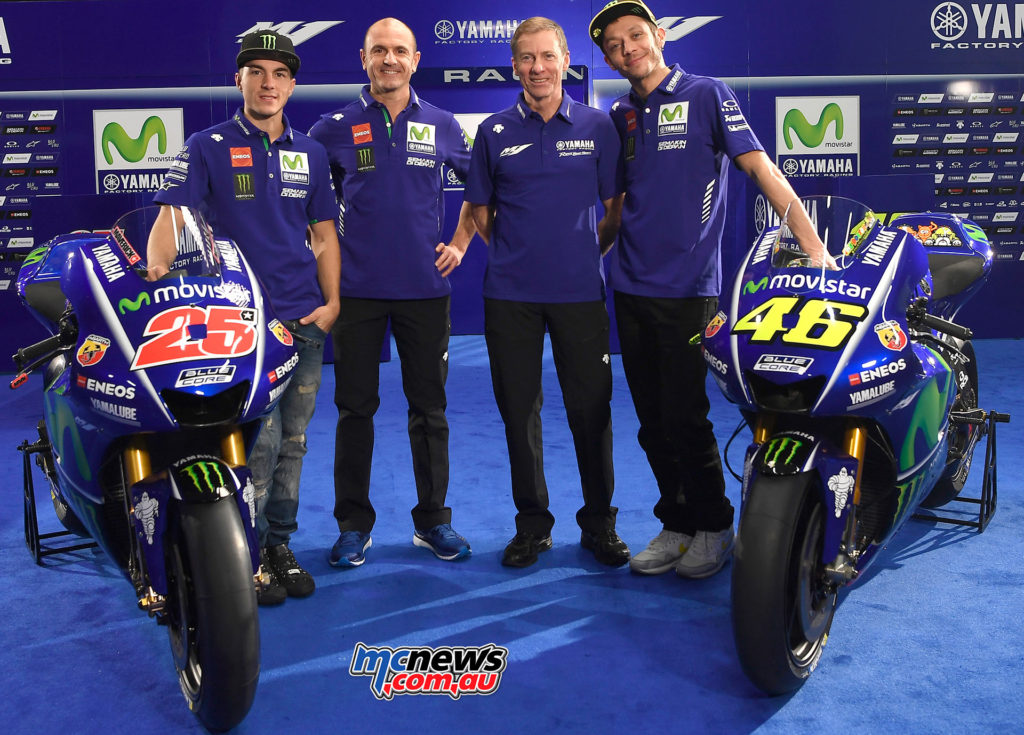 The ceremony saw the 2017 Yamaha YZR-M1 revealed in its new colours with a refreshed livery.

Besides the new Movistar logo, the Blue Core logo (Yamaha’s new generation engine development designed to extract maximum performance and fuel economy) is added as a new design element on the bike, while the deepened Yamaha blue gives the bike a chic finish.

Luis Miguel Gilperez, President of Telefónica España, was also put in the spotlight and further explained Movistar‘s strategy and its dedication to MotoGP before it was time to reveal the bike.

“Movistar has always been linked to sport. For Movistar, the specific case of motorcycling has been one of its fundamental axes of content and sponsorship for a long time, and we have managed to reach the top and stay there. As you all know, motorcycling is in Movistar’s DNA. Movistar and MotoGP share the same values, those of training, discipline, improvement, commitment and teamwork. What is more, for Movistar it is a way to be closer to the public, the young people and the new talent of the sport that we have always supported. From a sporting point of view, this is the fourth season in which Movistar and Yamaha are collaborating to continue a winning project in the undisputed premier class of motorcycling. Taking stock of what has been achieved so far – World Championship Runner-up in 2014, the Triple Crown and World Runner-up Title in 2015, and Runner-up and World Team Title in 2016 – next season is expected to be even more exciting, if possible, for everyone who loves the sport. A season that we are opening with the addition of Maverick Viñales to the Movistar Yamaha MotoGP Team, and he, together with Valentino Rossi, will strive for great results and, above all, enjoyment.”