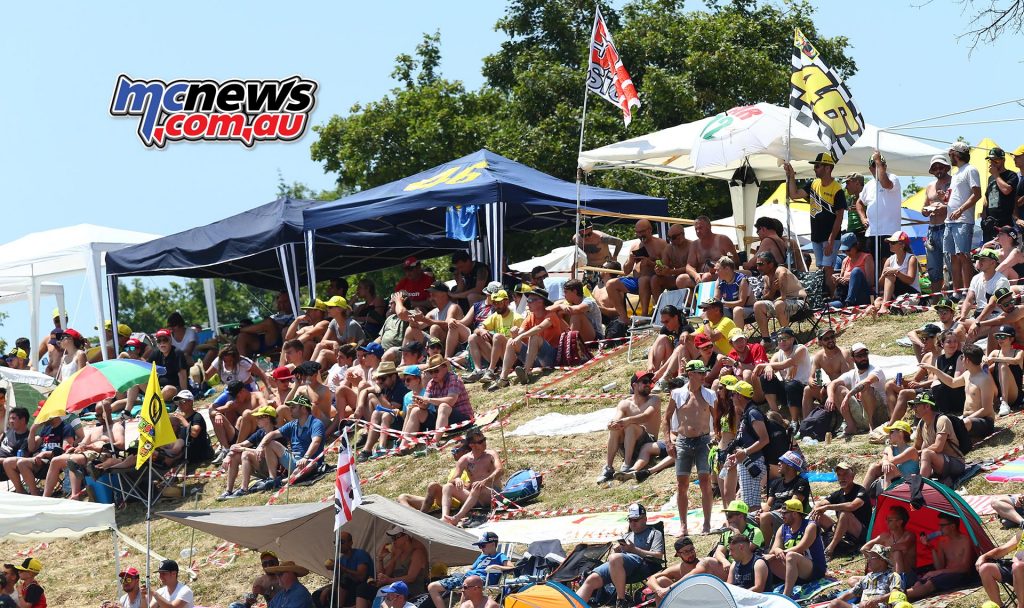 I don’t think anyone on earth loves MotoGP more than the Italians. Each year, Mugello (and Misano) literally heaves with pure wog passion wreathed in a fog of yellow smoke – because, after all, this is Rossi’s home track. Sure, there is an island of red in there, because it is also Ducati’s home track, and the Italians are always a little bit torn about who to cheer for.

On the one hand, there is the sainted Doctor, whom every Italian venerates as the second half of the Dual Godhead of Greatness (the other is half is Agostini), and on the other hand, there is the blessed Ducati, which is the soul of Italian motorcycling. It was a perfect Italian storm when Rossi was riding the Ducati, but we all know how that ended in tears. 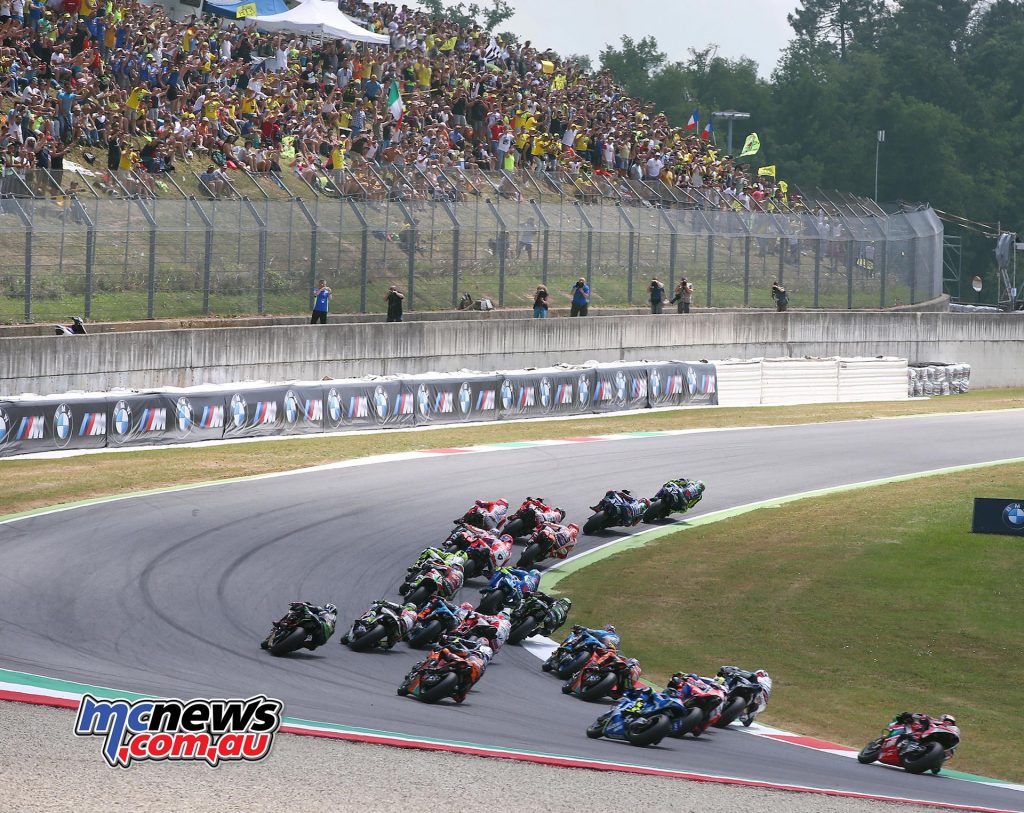 But Mugello is special. The riders know it’s special and the 100,000-strong crowd expects special things.

It was not disappointed.

Moto3 was a boiling, two-wheeled street-fight for the entire race. I was transfixed as the riders sailed into corners, six and seven abreast. The lead changed constantly and any one of the top 20 players had a chance at the top step of the podium. 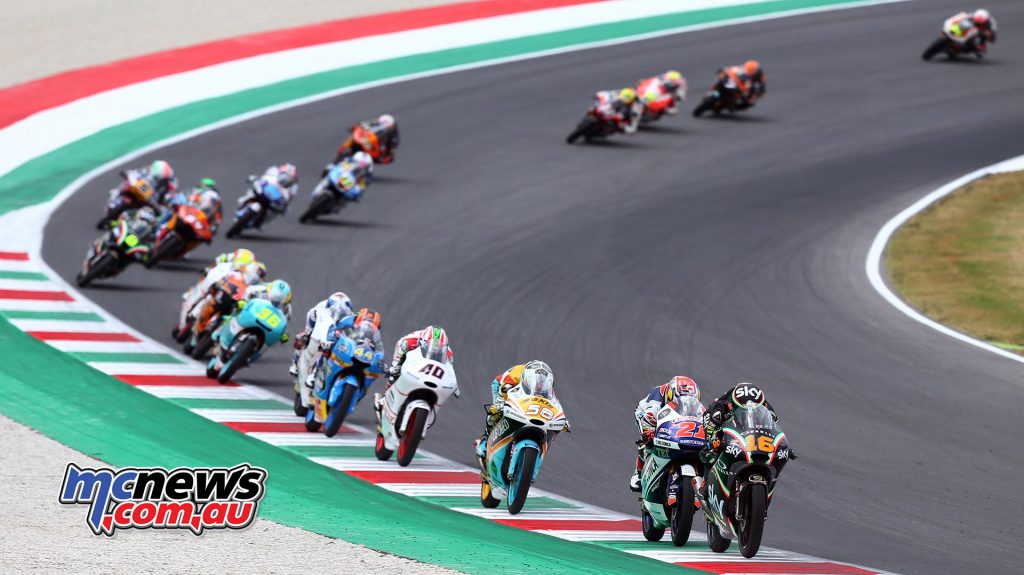 But it had to be an Italian. And it had to be Rossi’s Italian. His protégé, Andrea Migno, held his nerve for the victory and was rewarded not only by the howling crowd, but also hugged like a favourite teddy bear by Valentino immediately after the race.

“I don’t know already nothing!” the ecstatic Migno gushed at his post-race interview, clearly overwhelmed by his first victory.

Moto2 was a different race, but no less exciting. It was fittingly and brilliantly won by an Italian – no less a personage than Mattia Pasini, who last won here when he was racing against Nicky Hayden in 2008. 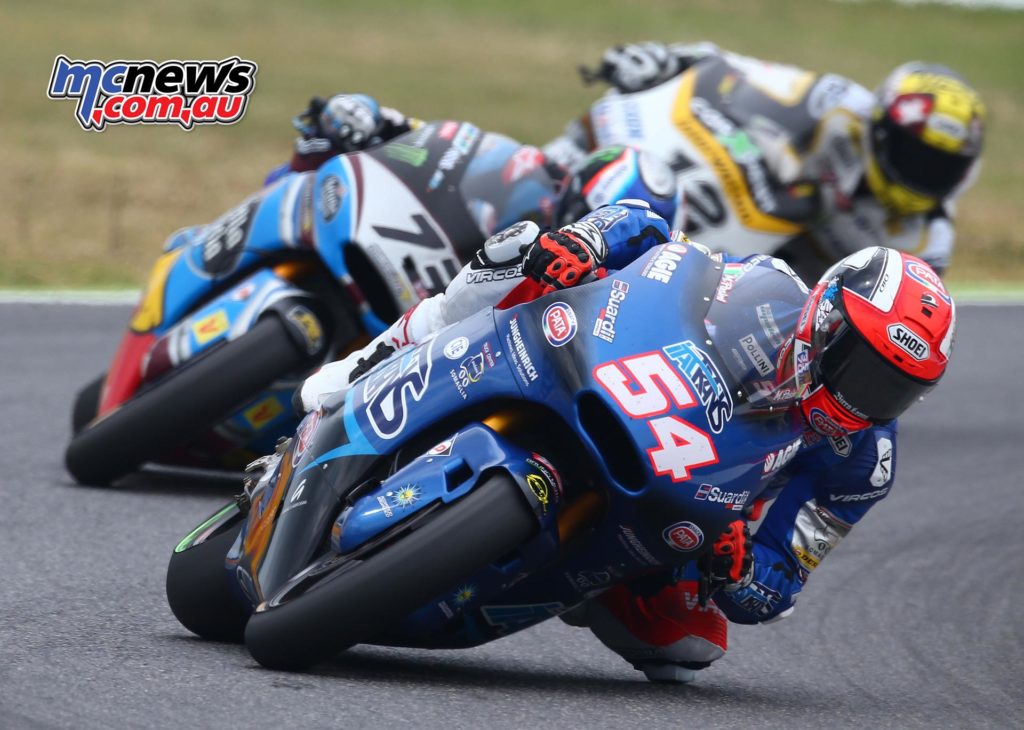 By this stage, the Mugello crowd was heaving like an ocean and the track was almost obscured by yellow smoke flares. If Rossi won here today, the whole place would have gone up like a volcano. 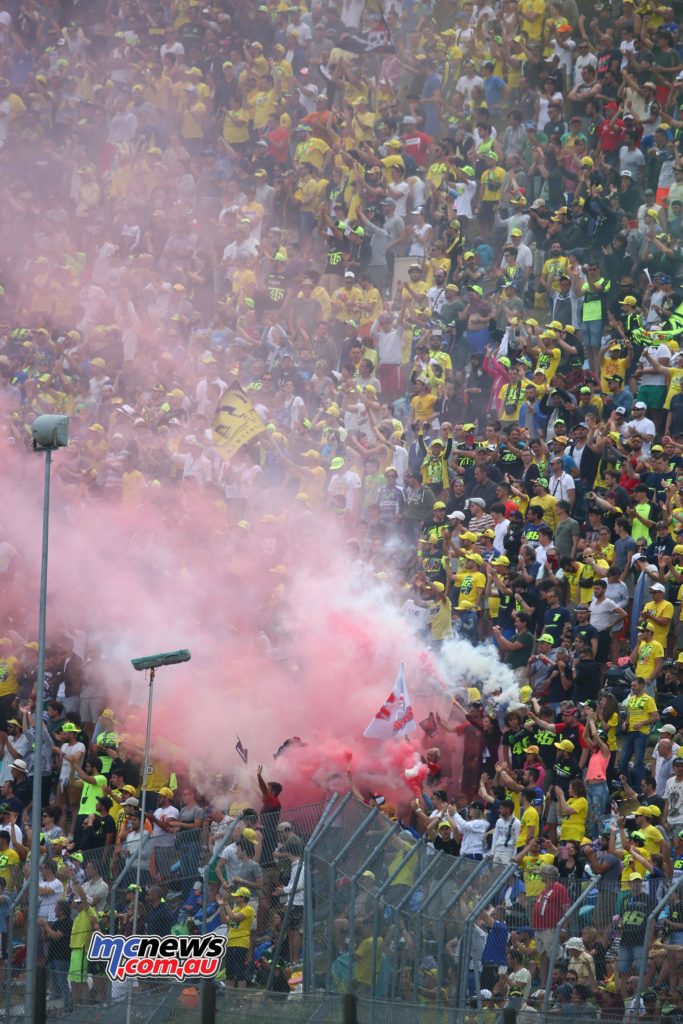 And there was no reason why he wouldn’t. He had won here nine times; seven of those victories were back to back. He’d proved to be fast in practice, and was perched in second spot on the grid, just behind Vinales. Sure, he’d smashed himself into hospital a few days earlier on a dirt-bike, and while he would wince from time to time, he didn’t appear to be affected by his chest injury on the track. Of course he was, but his fans were in denial. He would win. The Clinica Mobile would pump him full of pain-killers and he would win. It was the right thing to happen. 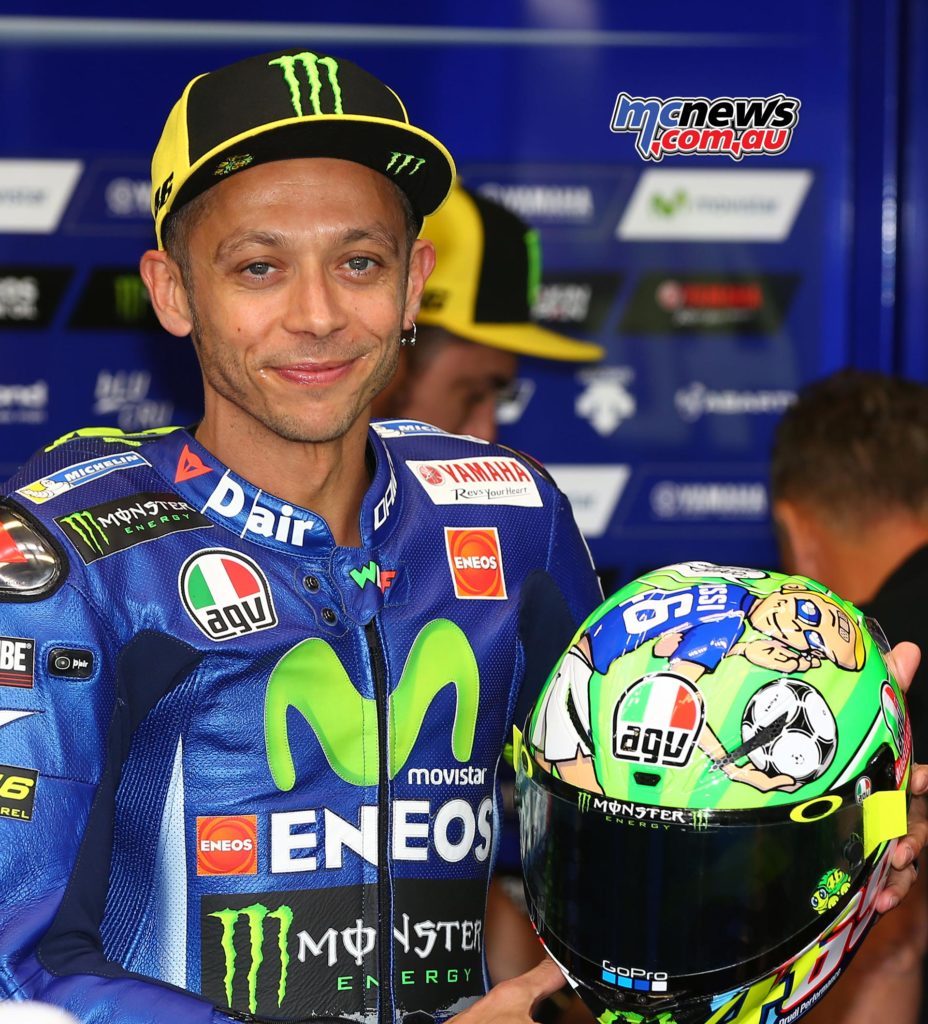 Behind Rossi, Dovizioso, wide-eyed with food poisoning, sat ominously in third, followed by Pirro on another Ducati, with the two factory Honda riders, Pedrosa and Marquez, behind him, while Jorge Lorenzo occupied a languid seventh.

When the lights went out, the crowd just about exploded. Rossi had launched himself off the line and was leading into Turn One and Two. Job done. The Doctor would now pull away and lead from start to finish, win magnificently, and the army would be called in to restore order.

Except of course that did not happen. 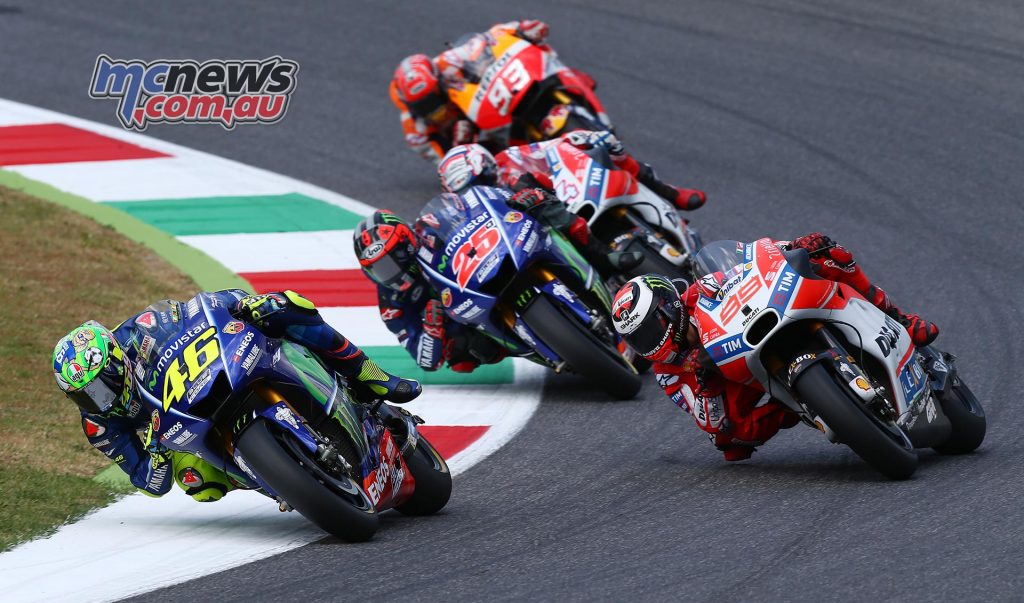 What did happen was an astonishing opening series of laps, which saw Lorenzo catapault himself into the lead, and duel with Rossi like it was 2008 again. For two laps they battled like gladiators, with Lorenzo using the Ducati’s staggering straight-line punch to out-drag Rossi down the straight. 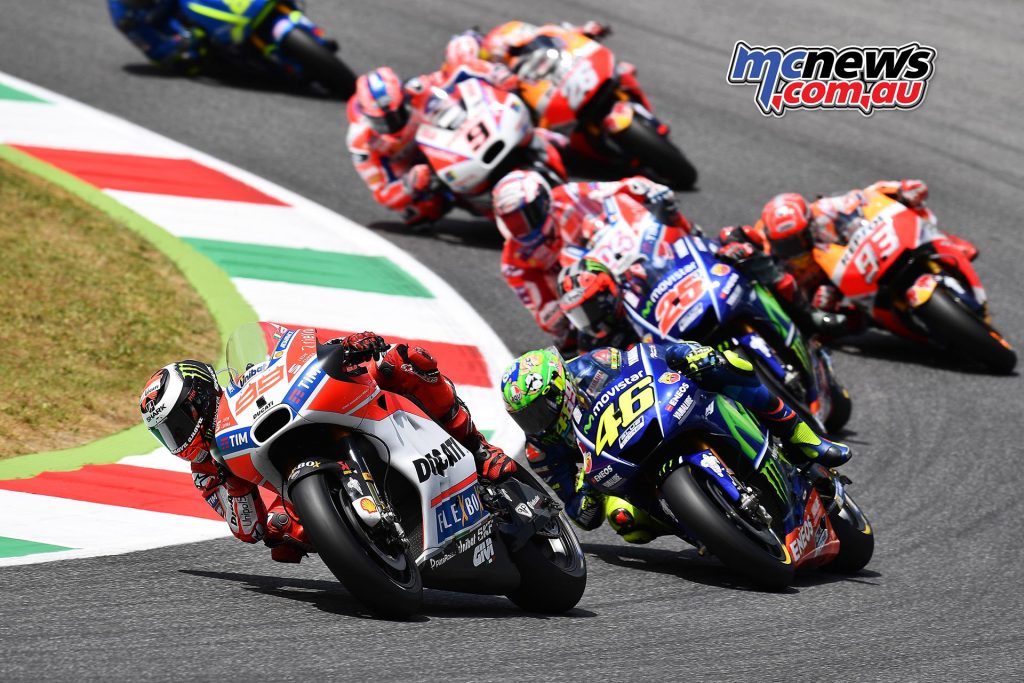 Suddenly Rossi was chasing his team-mate again. But Dovi was chasing Rossi, and before too long he’d caught and passed the Doctor and the three of them set to work as Lorenzo kept reversing. 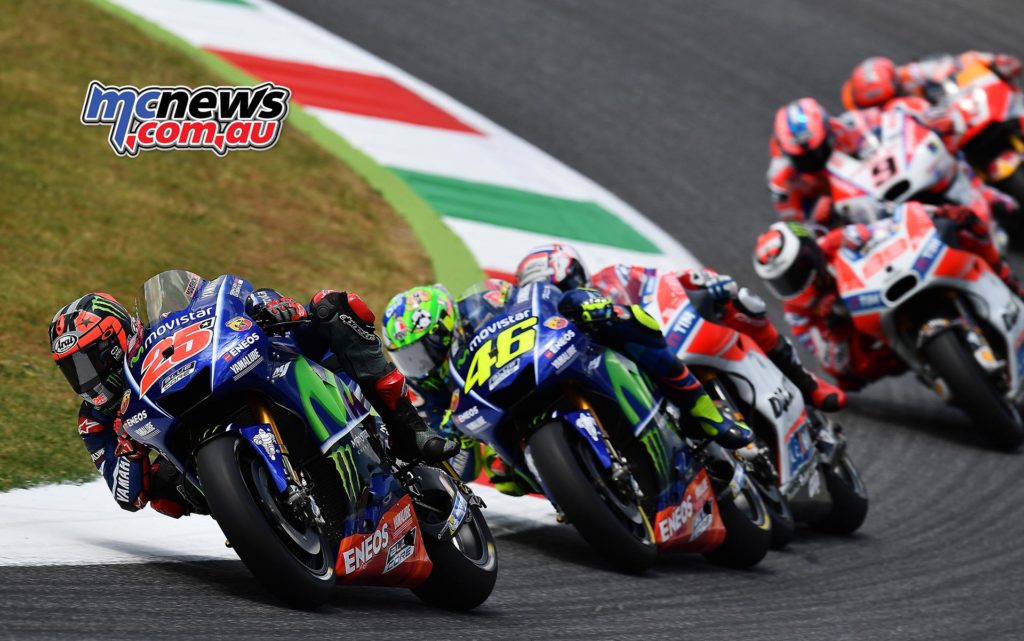 Petrucci was catching him, then passing him and then in the closing stages of the race, Petrucci suddenly found himself in third. Rossi’s injuries had clearly begun to affect him, but he hung doggedly onto fourth, as Dovizioso and his Ducati gave Vinales a demonstration after demonstration of sheer straight-line speed.

Dovi eventually passed the young Spaniard for keeps, and there was now an Italian on an Italian bike leading the Italian MotoGP. It wasn’t Rossi, but it would do. 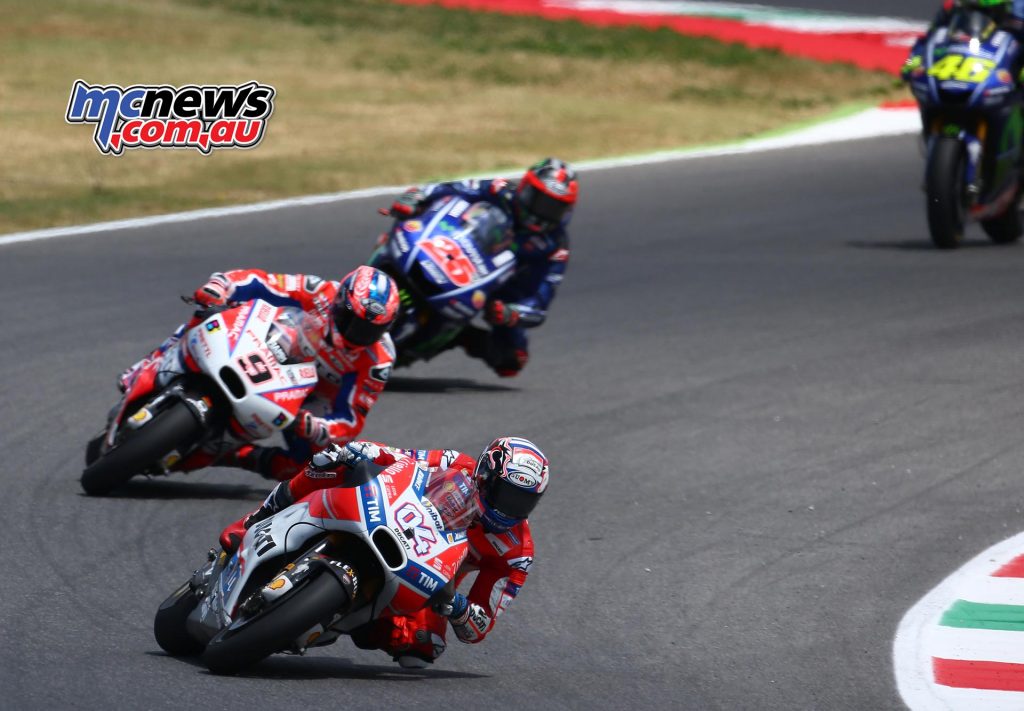 Behind the front-runners, Pedrosa took out Crutchlow, and Cal immediately offered to fight Dani in the gravel trap, but then realised it’s hard to throw a punch when your race-suit has been inflated. 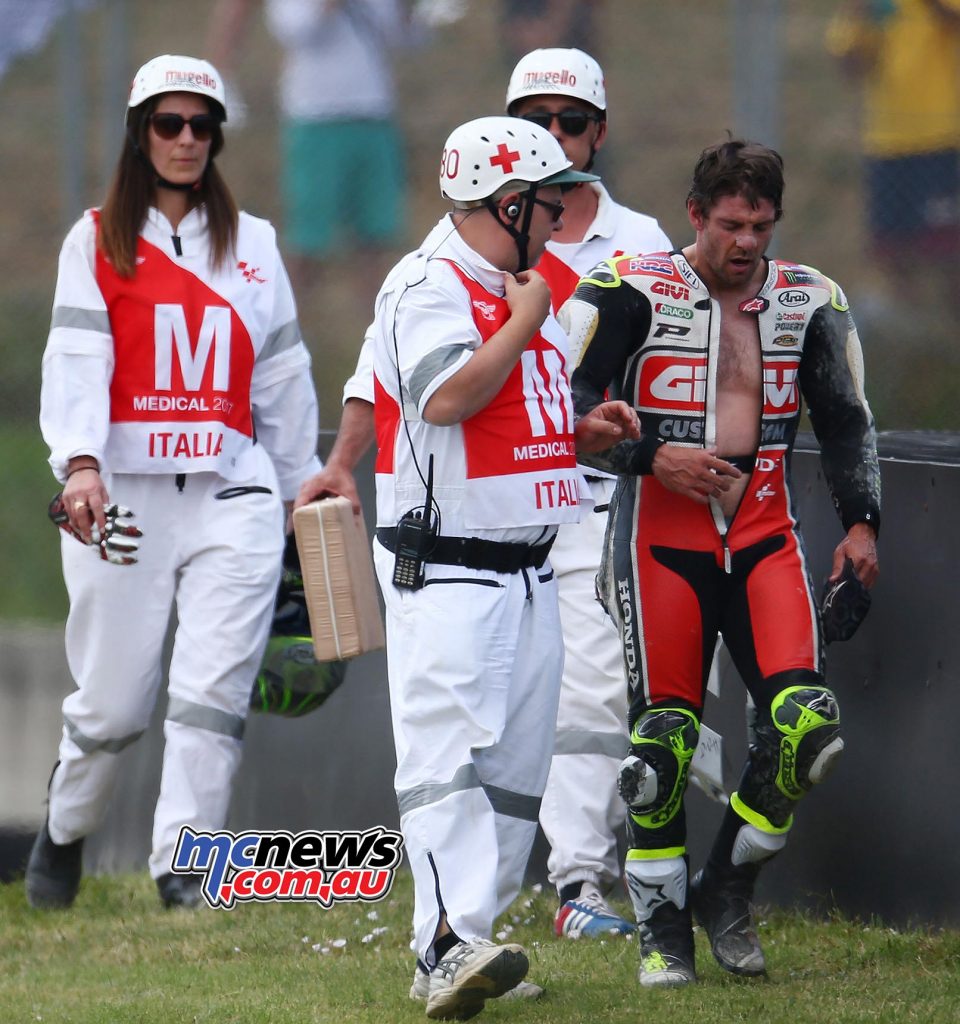 Bautista made a good showing on a vintage Ducati, and finished in fifth, Marquez rode all by himself to sixth, probably wondering why he was no longer winning every race like he did when he started in MotoGP. 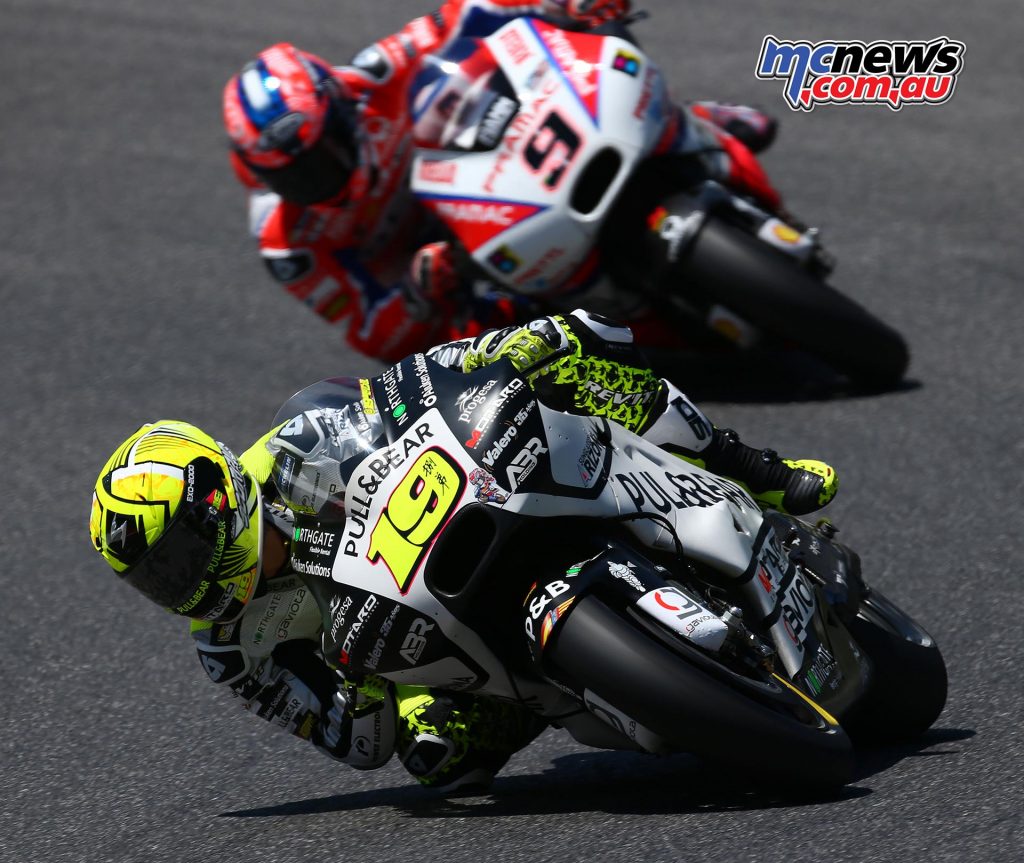 Zarco, who had relegated Lorenzo to eighth place, was realising the Italian crowd didn’t much care where he placed. There would be no back-flips off the tyre-wall for the Frenchman at Mugello. There would not even be a podium.

Ducati test-rider, Michele Pirro, had managed to squeeze himself into the top ten, and Iannone, who was also polluted with food poisoning, made an excellent showing off the start, riding from 16th to seventh, but then struggled to keep his bowels closed for the duration of the race and settled for 10th.

Tits Rabbit rode the finest MotoGP race of his MotoGP career to finish in 11th, and Asparagus A scored a ride through penalty for being tetchy on the grid, then joined his brother in the dust.

At the pointy end, it was all Dovizioso, with Vinales trying to hunt him down over the last two laps. The Italian was not to be denied. He rode perfectly under immense pressure from the championship leader, and gave Italy its second most sought-after result. Hell, if Rossi couldn’t win it, then the paisans would certainly accept Desmo Dovi and a Ducati on the top step. 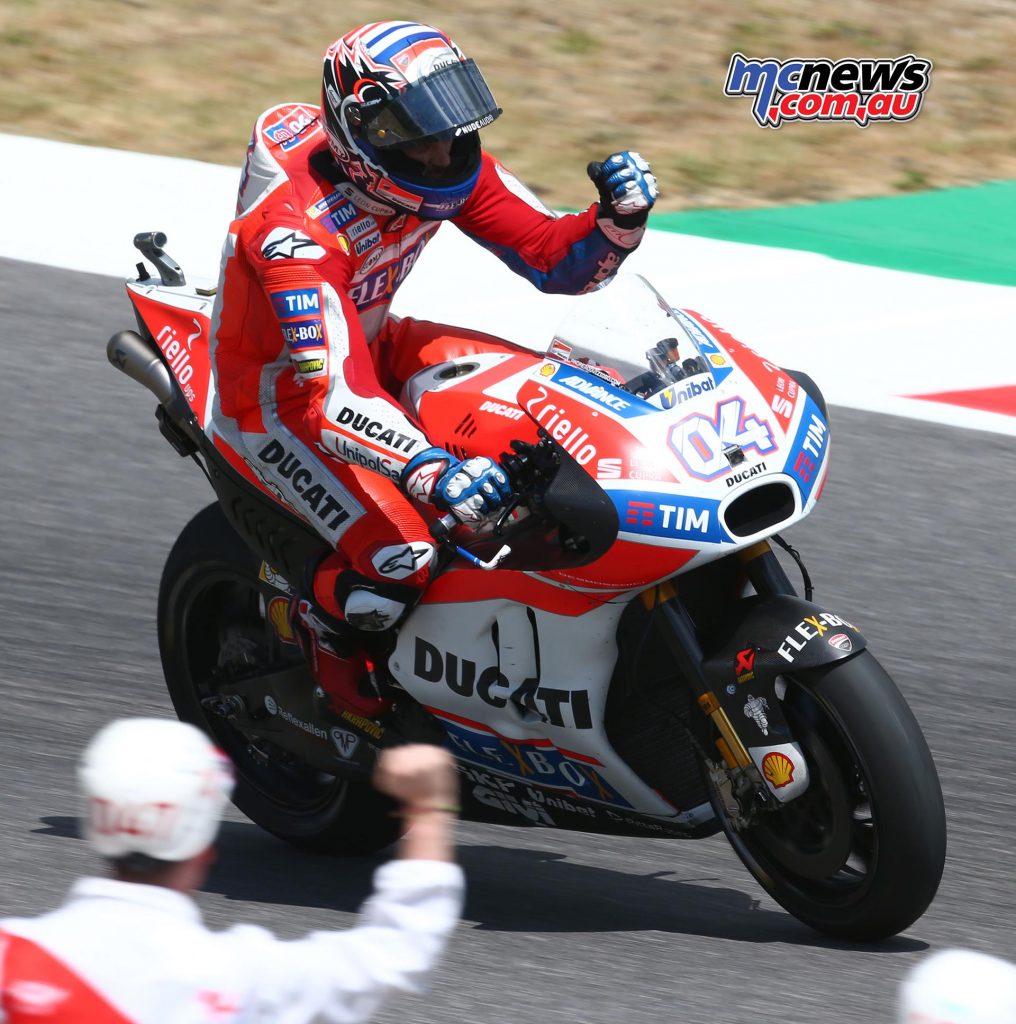 It was, by any measure, a glorious victory for both Dovi and Ducati. And while there may well be all sorts of discussions about who the top Ducati Corse rider really is, I’m pretty sure Dovi isn’t going to care. He’s second in the championship now. 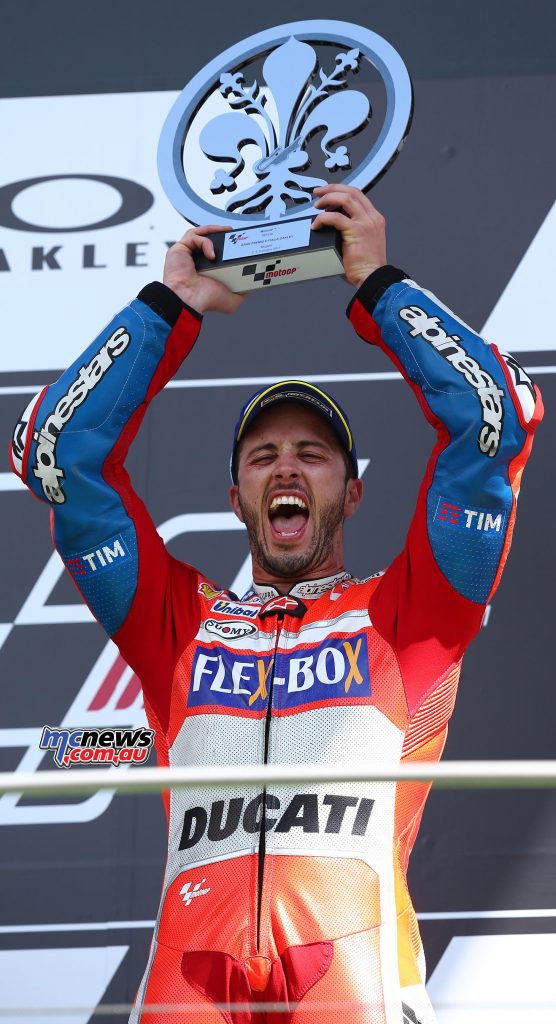 Of course, next week the Spanish Armada will sail into Catalunya, and the championship may well reshuffle itself again. 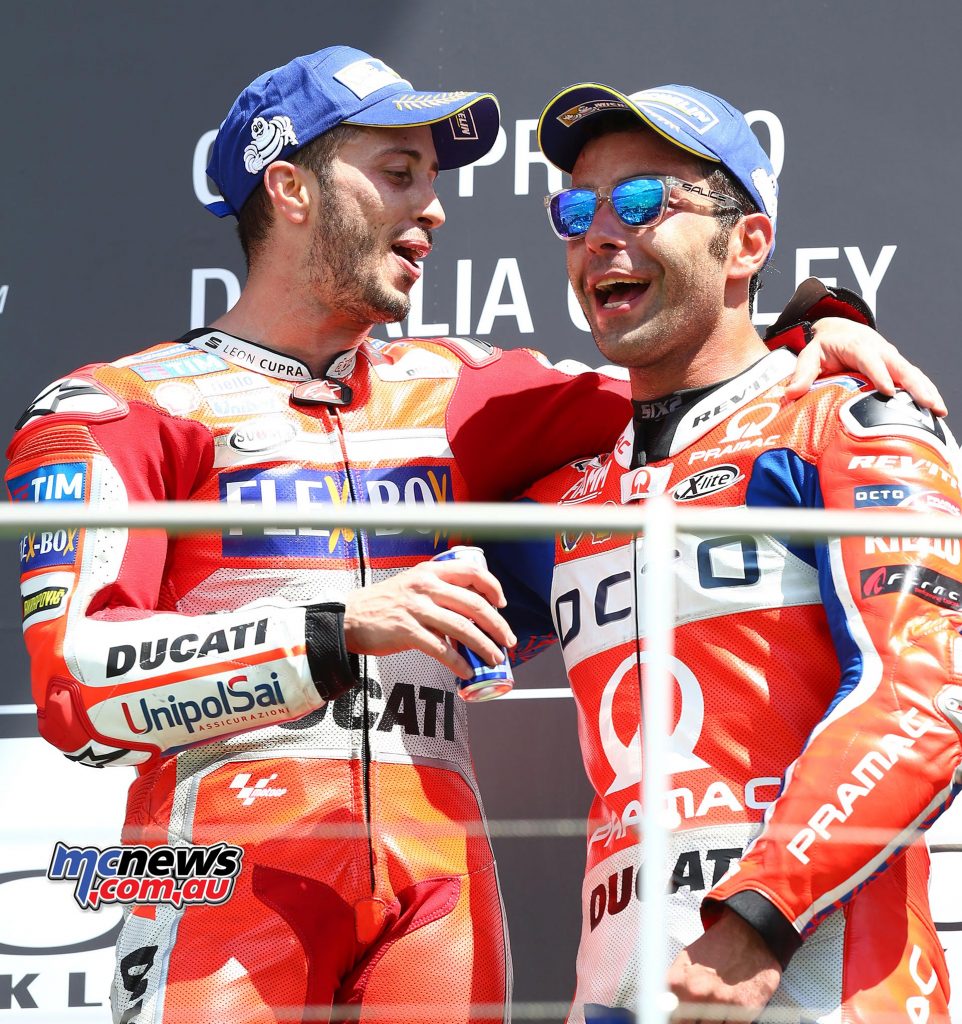 Yamaha offer ATV Safety Courses for all via YASSI

Yamaha offer ATV Safety Courses for all via YASSI