Suzuki World MX2’s Jeremy Seewer was the hometown hero and he didn’t disappoint his fans this weekend, taking second overall, with a first in Race 1 and fifth in Race 2, allowing Paturel to take the round win, with a consistent 2-1 result.

Hunter Lawrence also showed his skills as he worked his way through the pack in both motos, finishing with a seventh in race two after being involved in the same incident as Seewer in the first turn. Lawrence also didn’t get the results that his speed deserved after getting involved in some first turn antics himself, and finished Race 1 in 32nd place.

“I didn’t get the best start in the first moto as I was expecting a bit of tyre spin on the metal mesh and it didn’t happen. On Saturday, it happened so I was prepared for it, so I had less RPMs and my body weight was further back, but then it didn’t happen which obviously meant I got a bad start. Then in the first turn I stalled it anyway. I got my head down and charged through to 11th but the track was tricky and one of the ruts ripped my feet off the pegs and had a pretty hard crash. I couldn’t finish the moto as my head and back hurt a bit but in the break, I just tried to get myself ready as best I could for moto two. Then in the first turn of race two, some guys from the inside cut across and Jeremy crashed and I was right behind and nearly ran him over, but I stopped luckily. This meant I was last again so once more I put my head down and made it made it back up to seventh. Some definite positives in terms of my race pace and I’m hoping to take that kind of speed into Sweden next weekend.”

3 laps later Seewer then passed Prado to take the lead and from there he charged on. Kemea Yamaha Official MX Team’s Benoit Paturel rallied his way into second and on the final lap caught Seewer.

Seewer made a mistake out of a corner which allowed Paturel to get right next to him and apply pressure. Seewer noticeably tensed up but still took the win only 6 tenths of a second ahead of Paturel.

Race 2 couldn’t have started worse for Seewer when he hit the back wheel of Prado and went down in the first corner. Jonass was right in tow as Seewer was left collecting and restarting his Suzuki from dead last position.

Jonass then took the lead from Prado but fell shortly after dropping to 5th and giving the lead back to his teammate. Only a lap later it was Prado who fell and gave the lead away.

Capitalizing on the KTM rider’s mistakes was Rockstar Energy Husqvarna Factory Racing’s Thomas Covington. Covington led for 5 laps before the determined Paturel found a way by the American.

Meanwhile Jonass worked his way back into the top through and past his teammate. The real story however was Jeremy Seewer coming back through the field in a valiant effort. Seewer made it all the way to 5th at the finish giving him second overall.

Winning his race two and his first ever overall was Benoit Paturel in what is his final MX2 season.

“I have been waiting a long time for this win and today it was my day. It is really good for me and for all my team, we have worked really hard for this. Today is a really good day and I am really happy about it.” 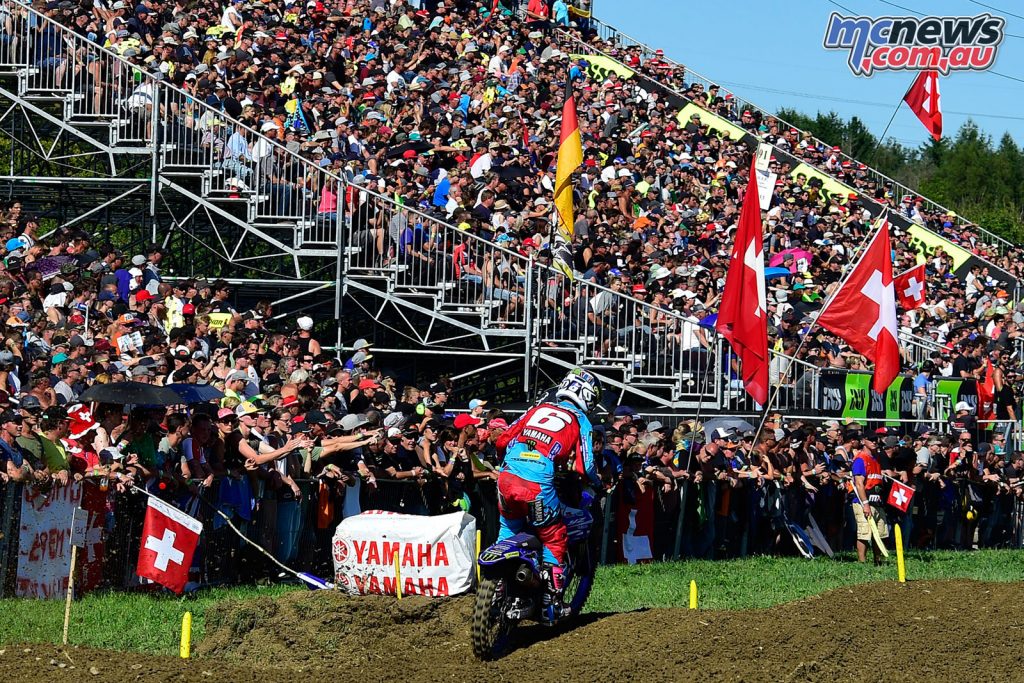 “It was amazing how the whole weekend went. All the fans and all my friends are here, and I was just feeling so good both days, especially after the first moto victory on my RM-Z250. Then the second moto started and I was going for the holeshot and a KTM bike pulled across at the last second and I couldn’t avoid him after he cross-rutted right in front of me. There I was, dead last and the dream was gone. No more home overall. Luckily, I was fine after the crash and I put in all I had and I think it’s still an amazing job to have got fifth after that start. The track was tricky and difficult to pass on but I gave it everything. I’m still disappointed to get second overall though when I know I could have won it. I know it’s tough but I’m not going to give up and that feeling I had after the first moto will stay with me forever.” 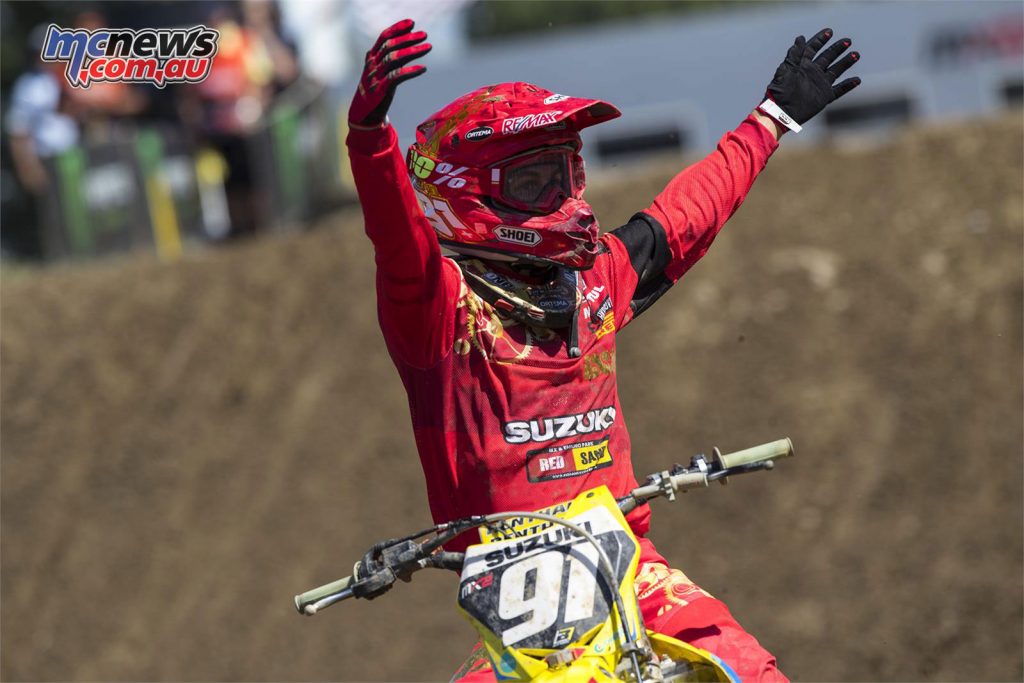 “We were a little off the pace today but we lost only one point for the championship, which is pretty good. We made the podium today and the most important thing is to stay consistent. I had a crash in the second moto which was a bit disappointing but to come back to 3-3 for third overall was good enough. Jeremy and Benoit were really fast this weekend and I didn’t want to push over my limit. I tried a bit too hard at one point in that second moto and then told myself to stay calm.” 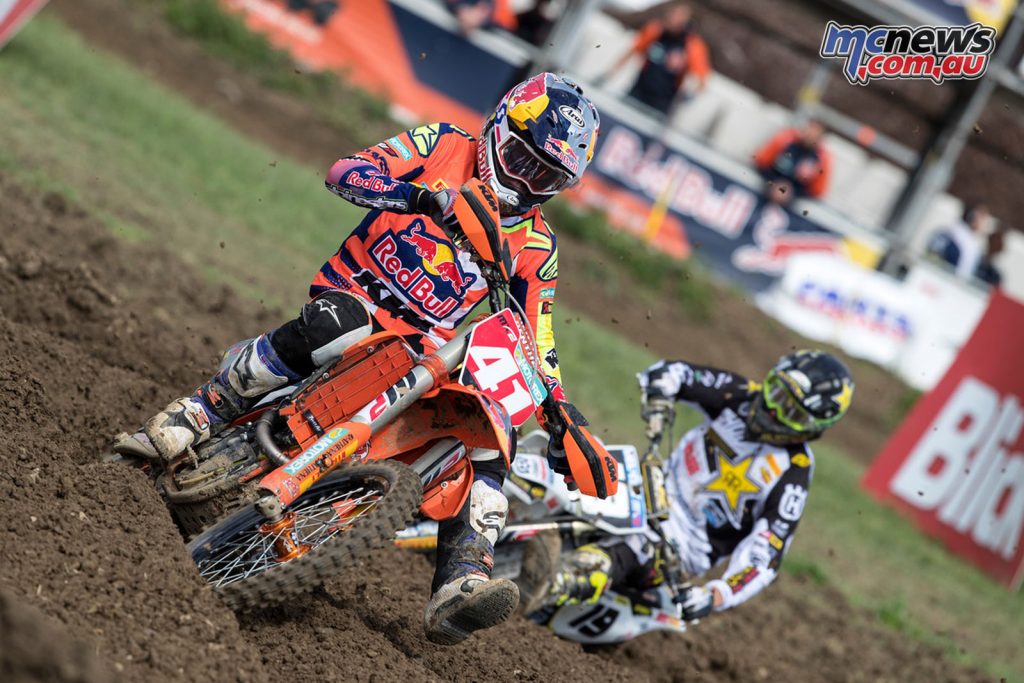 “I think it was a really good weekend. I made two great starts and concentrated on this more after making a mess of it on Saturday. I was comfortable in the lead in the first moto but then lost my rhythm a bit and the three guys came past me. By the end I had recovered and stayed close to Pauls. I crashed in the second moto and it dropped me to third and again I was looking for a rhythm. I kept my distance from Pauls but picked up the pace in the last laps and didn’t let go. So, pretty good, and we are improving on all types of terrain.” 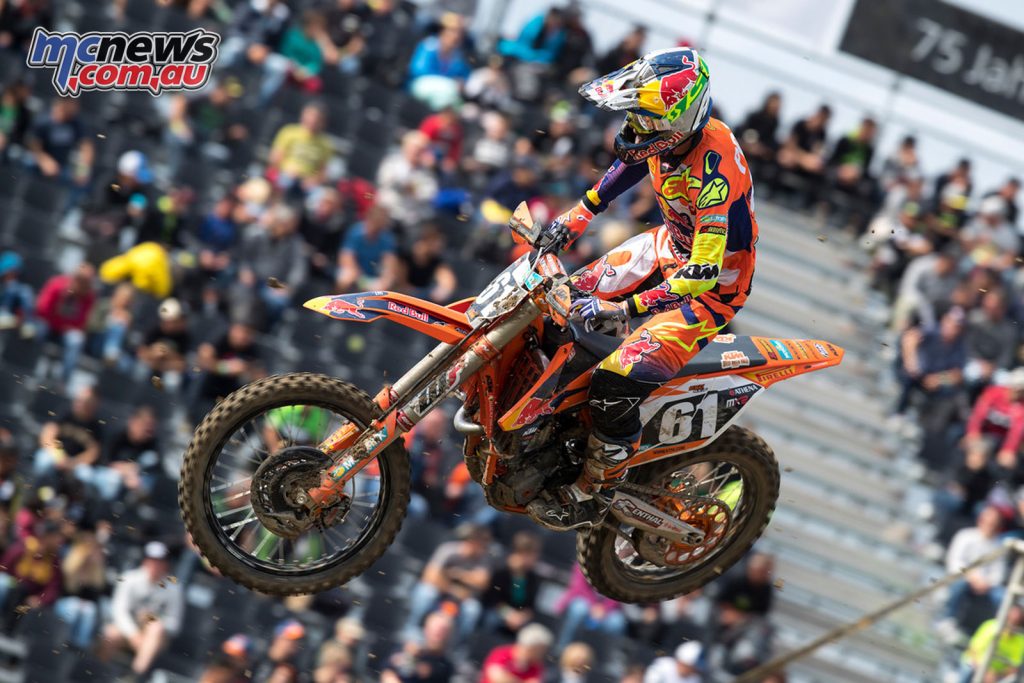 “Getting sixth overall is a good overall result but I was expecting more from this round. I did my best for some good results in both motos but I just couldn’t match the speed of the riders in front. The track was one-lined and it was very tough to make passes. There were some very deep ruts so it was also very physically exhausting. We’re now heading to Uddevalla in Sweden and I’m hoping for some improved results there.” 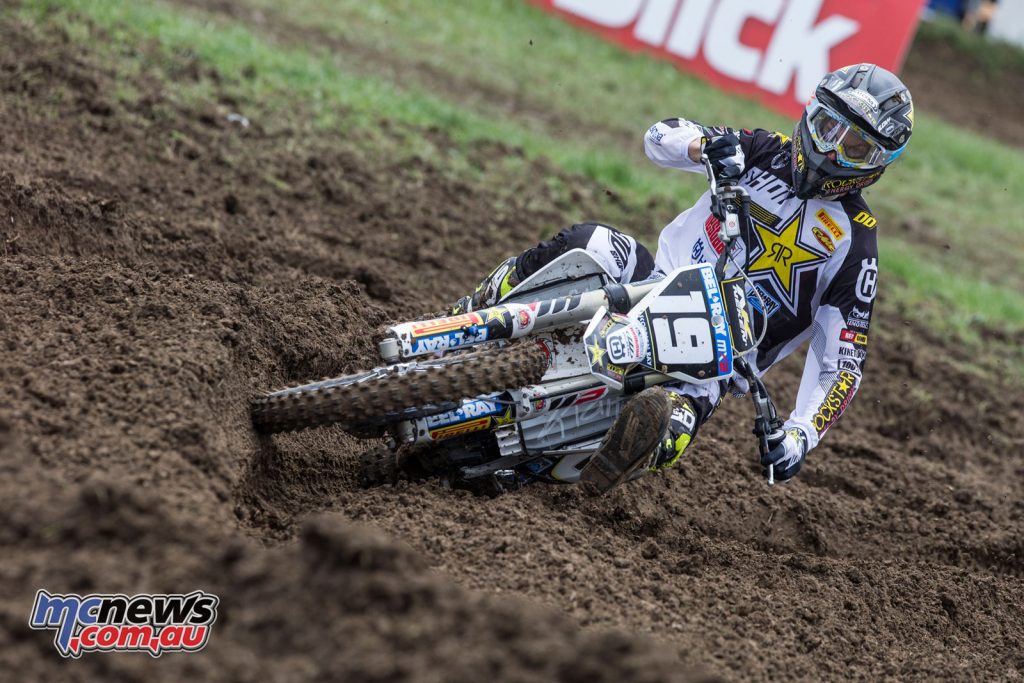