While Cairoli claimed the MXGP title in the early stages of the day the MX2 class had its own championship hanging in the balance. Red Bull KTM Factory Racing’s Pauls Jonass and Suzuki World MX2’s Jeremy Seewer have been fighting for the title against one another all season long.

Today was neither a Jonass or Seewer show though, instead it was Red Bull KTM Factory Racing’s Jorge Prado Garcia who took the win.

Aussie Hunter Lawrence struggled all weekend but the youngster showed his fighting spirit to grind-out two top-10 moto results to follow up from his second overall at the previous round in America. Any hopes Lawrence had of backing-up his USGP results went out the window when he tested some settings on the sighting lap of the first moto, only to have a nasty crash. 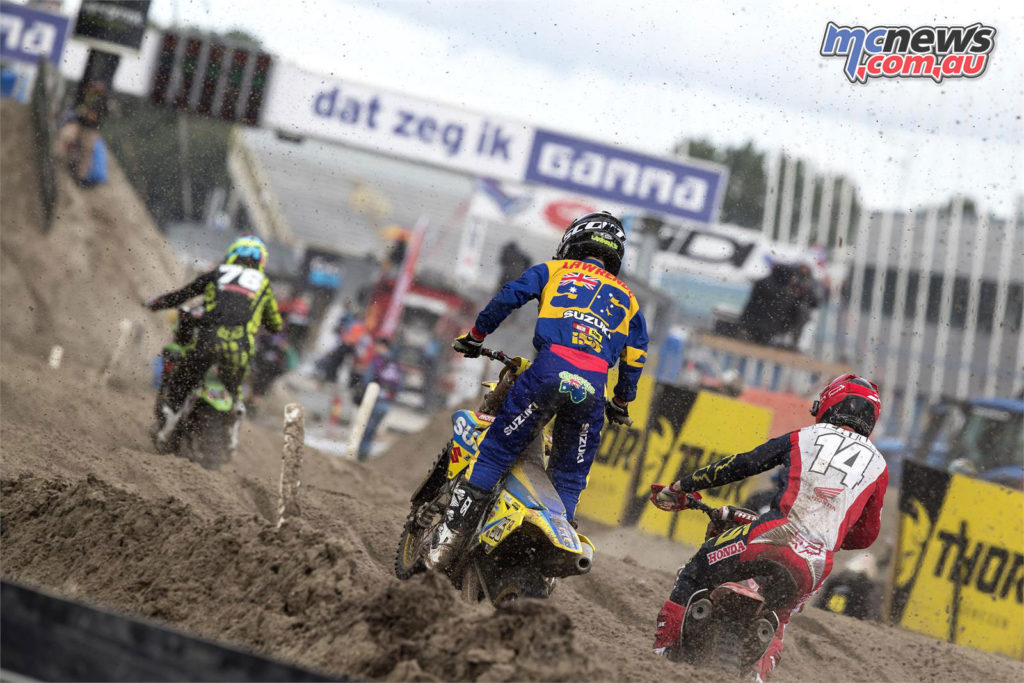 “We were struggling all weekend. I really didn’t feel good at all, I had no rhythm or balance. It was just a tough GP. It wasn’t helped when I had a crash on the sighting lap of moto one, as I hit my head and bent my bars and obviously I didn’t have long to recover before the gate dropped. I went out and raced, of course, but I was struggling and came home in 10th behind Julien Lieber.

Fellow Aussie Jed Beaton took home two 14th place finishes and 14 championship points to his name. After getting caught out the previous day with just how rough the circuit was, Beaton refocused overnight and came back stronger on race day.

Although he didn’t get good starts in either of the races, his ‘never give up attitude’ and ability to avoid any crashes meant he was to finish 14th place in both races today, showing that consistency was key.

“Today was not too bad, I was consistent. I took away two 14th place finishes. It was much better than my GP at Lommel. My starts were not as good today so I was a bit disappointed about that and I made mistakes in both races but I was glad I managed to stay on for both of the races- I did all my crashing yesterday! I was pretty happy overall and think this is certainly something to improve on and learn from.”

To start Race 1 Pauls Jonass lined up on the far outside of the starting gate due to his 19th gate pick. Jonass somehow worked a miraculous start and took the Fox Holeshot. Following Jonass closely was Prado and just like last year Prado wasn’t deterred by his teammate’s title hopes.

Prado continually pushed Jonass, showing him a wheel time after time. Prado took the lead on lap 5 but he was only able to hold it until lap 7 when Jonass would again take the top spot.

Jed Beaton to miss Latvian GP due to shoulder injury

Behind the KTM teammates were the Rockstar Energy Husqvarna Factory Racing duo of Thomas Covington and Conrad Mewse. Mewse showed previously unseen top 5 speed at one point even battling with and passing Covington. Mewse unfortunately would fall shortly after moving to third and instead finish 6th.

Jeremy Seewer started in 6th but struggled to move forward past an impressive ride from Jago Geerts. While Seewer struggled with Geerts, HSF Motorsport Team’s Calvin Vlaanderen took the 6th position from the title contender and went on to pass Geerts who later had a heavy crash. With the crashes of Geerts and Mewse, Seewer claimed 5th behind Jonass, Prado, Covington, and Vlaanderen.

MX2 race 2 kicked off with a Fox Holeshot from Conrad Mewse and Prado hot on his trail. Prado followed Mewse the first four laps before taking the Brits lead away. Jonass started the race around tenth and perhaps rode to cautious as he only made his way up to seventh by the finish.

Jeremy Seewer and Rockstar Energy Husqvarna Factory Racing’s Thomas Kjer Olsen started in 5th and 6th and both worked the way forward with Seewer leading the way to 2nd and 3rd. The race was also another strong performance from Vlaanderen as he started and finished fourth just ahead of his HSF Motorsport teammate Brian Bogers.

“Assen isn’t my favourite track, and probably isn’t the favourite track of any rider in the paddock but I’m really happy to end up on the podium after a tough first moto. My start wasn’t that great and I couldn’t make the passes, which wasn’t easy on this track and I struggled on the wave sections. We turned it around in race two and I came so close to winning, which is what I needed to do in order to stop Pauls Jonass winning the title at this race. I’m happy to keep the title alive though and push the championship until the final round. At least we will bring it to the last race where hopefully I can get another GP win and end the season on a high note.”

Prado managed to take his third overall win of his career and this season, two of which have come in the sand.

“It was good to get my second win on a sand track. I’ve learned a lot this year and I have to put it all together now to do better next year. The most important thing is to be consistent, as you see with Pauls. He is pretty much the fastest guy this year and it’s possible to learn a lot from him and use him as a reference. We didn’t train so much together this year because I was going to school! Now I’m looking forward to next weekend which should be a totally different kind of track.”

Pauls Jonass took the second spot on the podium and though he didn’t take the championship just yet he did gain slightly on Seewer who finish third overall.

“For sure I wanted to win the title this weekend and after the first race it seemed to be possible but I didn’t get a good start in the second race and struggled on the first few laps. I had some close calls with riders next to me and took it carefully, maybe I was too cautious. I put pressure on myself and that was my problem in the second moto. Saturday was very bad but I turned it around and got on the podium again. Now I have a 41 point lead but I will try not to look at that in the next moto; as you saw with Tony today he took the holeshot and was pushing until the last laps to pass Jeffrey. I want to have the same approach next weekend.”

In an epic day of racing at the MXGP of the Netherlands the Women’s Motocross World Championship chase tightened up to a new level of competitiveness with the top 4 in the standings only separated by 5 points. Dutch native Nancy van de Ven took double race wins on her way to taking the narrow championship points lead in Assen.

In Saturday’s WMX Race 1 Larissa Papenmeier led the opening 5 laps first over Team One One Four’s Livia Lancelot and then Nancy van den Ven after the dutch rider made it by Lancelot on lap 3. After the pass on the #114 van de Ven went after Papenmeier and took the lead.

Meanwhile the title contenders of MXFONTA SYNECO’S Kiara Fontanesi and Altherm JCR Yamaha’s Courtney Duncan where coming back from 11th and 9th place starts. The pair was able to make it up to a 4th place finish for Duncan and a 5th for Fontanesi behind van de Ven, Papenmeier, and Lancelot.

Race 2 was full of passes and battle with the only exception being the #85 of van de Ven who led from the start and never looked back on her way to the race win and overall. The real shake up was between Fontanesi, Papenmeier, Lancelot, and Duncan who started 2nd,3rd,4th, and 6th with KTM Silver Action’s Amandine Verstappen in the 5th position early.

Papenmeier struggled early and though she started in 3rd dropped to 6th only 3 laps in to the race. At the same time Duncan was moving forward quickly first to 4th on lap 3 and to 3rd on lap 7. However Livia Lancelot made a late charge going from fourth on lap 9 of 12 to cross the line in second ahead of Fontanesi, Duncan, and Papenmeier.

In the overall it was a clear home win for Nancy van de Ven with Lancelot taking second and Papenmeier rounding out the podium. In the championship van de Ven takes the red plate into the final round next weekend by only 2 points over Courtney Duncan in 2nd and 5 points over Fontanesi in 4th.

“I feel really good about this weekend. I did the maximum and took maximum points. I also took the red plate, so it couldn’t have been better.”

“We worked a lot since Loket to prepare for this sandy round, and to get a second place here is more than I could expect! I didn’t worry when I saw the rain while I was coming here; I’m used to practising in tough conditions and I was confident before the race. I got third position on Saturday and today the track was less demanding as the rain stopped but it took me some time to get a good rhythm; after ten minutes I found some good lines and could pass some of my rivals to get this second position. Now we go to the final round in Villars in a good position in the championship; it’s close as we are four girls within five points and I’m happy that the title will be decided there as I love this track and have always been successful at the French events. I will not feel any pressure in Villars, even if the standings are close and there will be many fans coming to this race, which will be the last of my career as I’ve decided to retire from GP racing after this race. As I said after winning my second world title last year, everything I get from now is like a bonus as I have nothing to prove; I will turn 30 next year, I have won world titles, French titles, earned a medal at the X Games. I’m very happy with my career but rest assured that I will give everything next weekend to get another world title!”

ASBK images from Round Three | Wakefield Park Gallery A