The Pata Honda World Superbike team has announced that it will retain the same rider line-up of Jonathan Rea and Leon Haslam heading into the 2014 world championship season.

Rea is currently recuperating from a fractured left femur that he sustained in a crash at Nürburgring in Germany last month, but the 26-year-old from Northern Ireland is making a good recovery and is optimistic about the possibility of riding his Honda CBR1000RR Fireblade again before then end of the year.

Rea began his world championship career with the Ten Kate-run Honda team in the 2008 World Supersport series before moving up to World Superbikes in 2009, since when he has secured 33 podiums from 116 races, including 11 race victories.

He will once again partner fellow British rider Leon Haslam who joined the team for the 2013 season, which has unfortunately been affected by a broken leg he sustained at Assen in the Netherlands in April.

Haslam, 30, has contest 155 World Superbike championship races, a third of which have been on Honda’s CBR machine. The British rider has achieved a total of three race wins and 28 podium finishes since his first SBK race in 2003, and he finished as runner-up in the series in 2010.

Jonathan Rea – “It’s been a big decision that I’ve thought long and hard about because there were some other options to consider. However, at the end of the day it was an easy choice because of the faith and respect that I have for the team that I’ve been with for six years and the company that I have been with my entire career. I know how hard the guys work to make the Honda competitive and I know that we have the potential to fight again for more podiums and race wins and the championship next season. Those podiums and wins are what motivate all of us and that’s why I know that everyone will pull out the stops over the winter again to make them happen. We will go into the testing programme in a much better position than we were in 12 months ago because we’ve worked so hard to get the new electronics package to work this season. I am as motivated as ever and really looking forward to riding my bike again.”

Leon Haslam – “I’m very happy to have another go at it, really! This season has been pretty non-existent with the injury and the big learning curve we’ve had with the new electronics. So I’m excited to get back to full fitness and to have good go with the bike and see if we can turn the potential into success. We’ve made some really good steps recently but that’s been combined with some bad luck this year. Hopefully, that’s all out of the way now and we can keep making progress in the last few races and over winter testing. The Haslam link to Honda has been strong for many years and it was fantastic to win the Suzuka 8-hour this year. Hopefully we can go back and defend that next year, and I can’t wait to go into the next World Superbike season with the same bike, the same guys and have a proper go at it.”

Ronald ten Kate – team manager – “Jonathan has demonstrated great faith in this team over the years and we are, of course, overjoyed to have him back for a sixth World Superbike campaign. We have got to know each other very well over the years and one thing that comes across is his consistent and tenacious desire to get the very best out of the CBR – something he does year after year. Of course, with injuries, it has not been an easy season for him or for his team-mate, so we are very happy that Leon will join us again for next season. With two fit riders and some further development on the bike, we can look forward to 2014 with renewed confidence and optimism.”

Carlo Fiorani – racing operations manager, Honda Motor Europe – “I do not think it is a secret that both Jonathan and Leon had some other options to consider for 2014, so we are, of course, delighted that we will be working with them again. We believe that there is a great level of mutual respect between us and we know that we have two fully-motivated riders who have the potential to fight for top honours. It’s good that they, too, know that the Honda they ride has equal potential and that they will have a team around them to help get the results that we all want to see. For many reasons, 2013 has been a difficult year for everyone, so we all hope that, with Dorna taking the series to new levels, we can have a 2014 season that is safe and successful, both for the riders and for the whole team.” 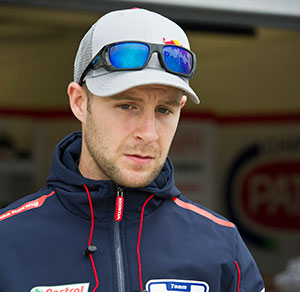