Rea was untouchable over the 20 lap contest around the 4.592km Autodromo Internacional do Algarve at Portimao as he shot away from the head of the grid and soon built up an unbridgeable lead at the front. The victory was Rea’s 18th podium in 19 races this year and the Northern Irishman now enjoys a 95 point lead at the head of the standings.

After a crash in SP2 Davies also rode brilliantly, coming from ninth on the grid to take a highly creditable second place, beating his teammate Melandri across the finish line by just under four seconds. Melandri in turn beat Camier by just +0.342 as the Brit chased him hard in the final stages of the race.

There were crashes for Stefan Bradl (Red Bull Honda World Superbike Team) and Leandro Mercado (IODARacing), meaning DNFs for both, although the pair escaped their incidents otherwise unscathed.

Tom Sykes (Kawasaki Racing Team) missed the race and is out of action for the rest of the weekend after sustaining a finger injury in an FP3 crash earlier on Saturday.

“To take 10 wins is great and that is one more than I had last year. I could not quite believe my opening lap. When our bike had full grip it seemed to be on rails but when the grip dropped a little bit I had to compensate with my riding style, and change how I was braking and tipping into the corners. We are 20 laps wiser with the new tyre we used today so we need to work a little bit with that. It was a difficult race to keep my concentration, because with a gap like that it is very easy for something to go wrong when you switch off a little bit. I just tried to keep my rhythm and in the end we could get it done.” 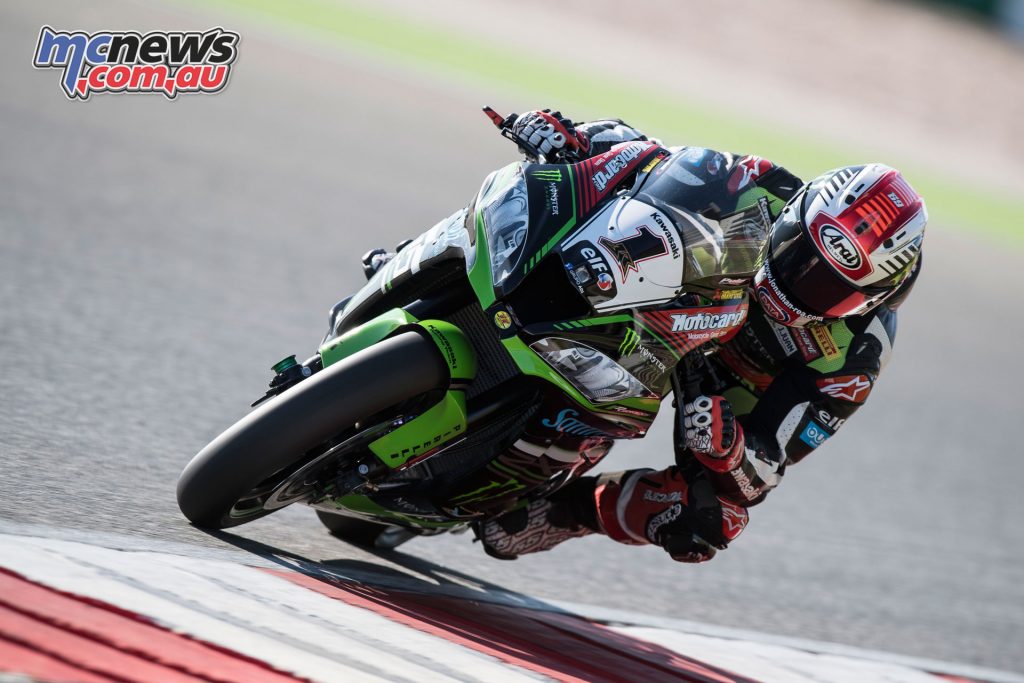 “To be honest, this was the best that we could do today. Rea has been on another level here so far, but I felt pretty confident about our pace going into the race. We got off to a good start, picking up five positions in the first few corners, but unfortunately I didn’t feel particularly comfortable from half-way point onwards. We had a few warnings and, even if I wasn’t riding too hard, I felt that we were still on the limit. At that point I was still pulling away from Marco but not catching up with the front, so I just tried to play with my style a bit to see what I could learn for Race 2. We need to understand how to improve to get the best out of both myself and the package.” 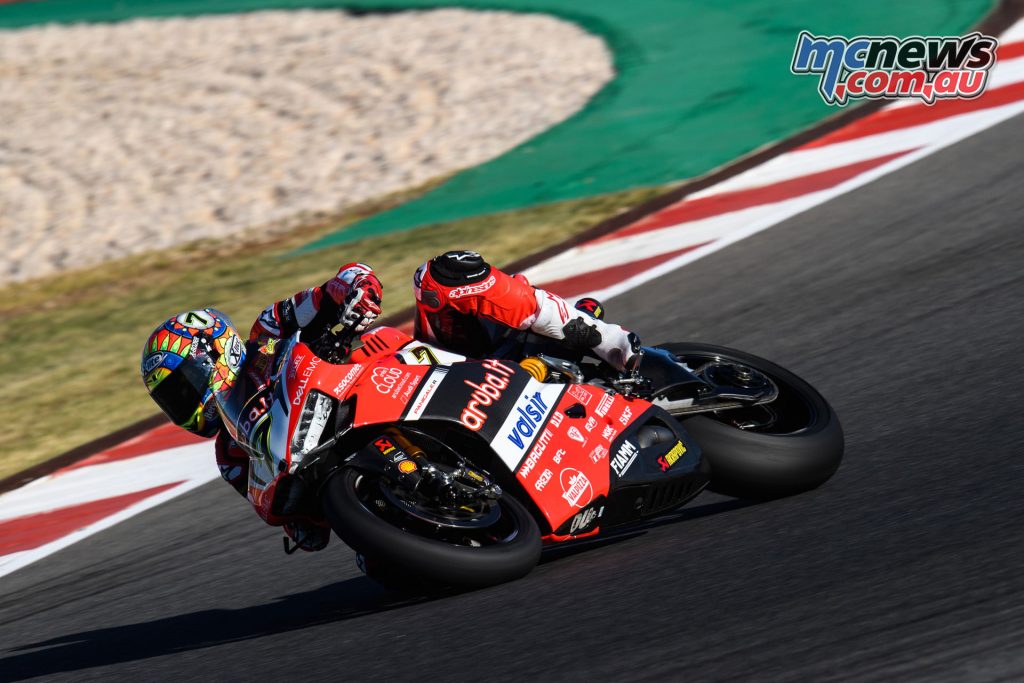 “It was tough out there today, because during the race we couldn’t use the tyre we’ve been working with all weekend. Safety comes first, but this gave us some issues with our electronics’ setup, especially with power delivery and engine brake. I couldn’t push as hard as I wanted to, struggling with grip throughout. When I saw that Camier was coming back strong, I tried to give my 100 percent without making mistakes, but for sure we’re looking to improve our performance for Race 2 in order to be able to fight at least with Chaz until the end. It’ll be crucial to get a good start because it’s not easy to pass on this track, but usually we’re strong in this aspect so I’m confident.” 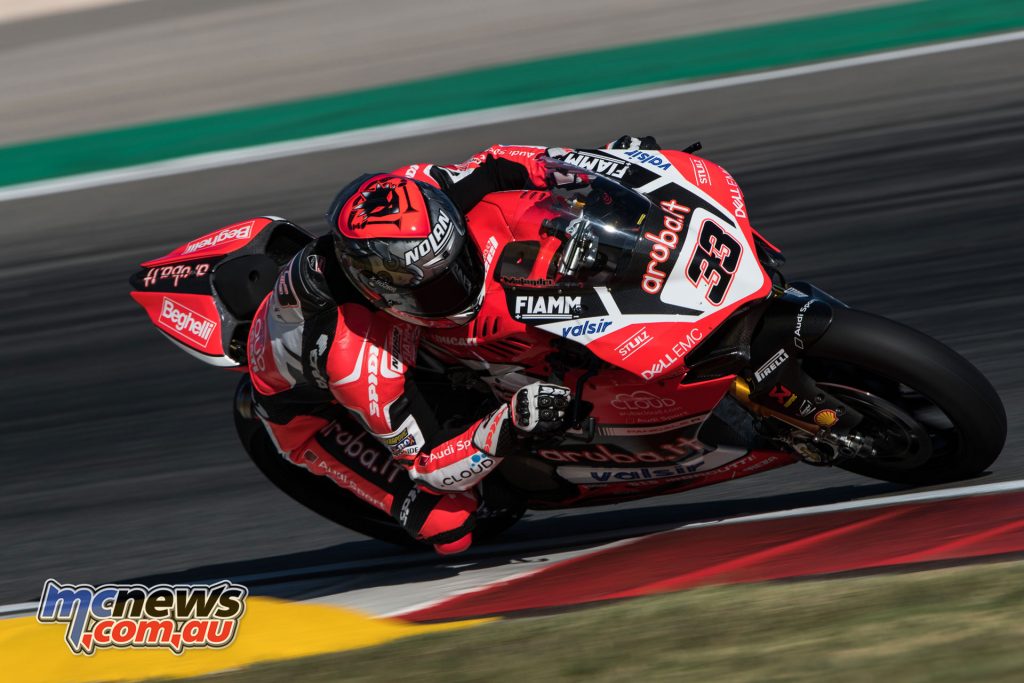 “I am pretty pleased with the race! I had a good initial start but then got passed by some riders on the acceleration phase and then I had to battle my way forward. I had some good fights with some riders but, to be honest, after a couple of laps I had problems with the front grip and Alex passed me because I almost crashed. I then tried to follow Alex, we had a similar pace I think, so I had to manage the rhythm from early on in the race. I wasn’t completely happy with the feeling with my R1 so I think we did a really good job to finish in fifth and hopefully we can make some steps forward with the setup for tomorrow. It is good to be in the top five again after some tough results lately, so I am really happy and looking forward to starting Race 2 from the front row!”

“I went on my out lap in FP3 and the bike was feeling good. As I started accelerating out of turn eight, still with the bike banked over, the front wheel came off the ground. As it touched again obviously the rear was going a lot faster than the front. The front tyre took a moment to come up to speed. In that moment it set off the rear and it got out of shape a little bit. But then it hit the lock -stop on the steering – and that completely kicked the rear out. It got the better of me. Looking at the crash and being a realistic kind of guy, I am a lucky man – but also unlucky that it got to where it did from something so small.”

Championship Standings after Race 1, Round 10

Despite a crash earlier in the day in FP3 Sofuoglu produced a hot lap of 1’45.541 in SP2 to slot in at the head of the grid, with championship leader Mahias missing pole himself by just 0.035s. In a tight session Jacobsen qualified third as he lapped just 0.05s down on Sofuoglu.

Sheridan Morais (Kallio Racing) was on provisional pole but late crash at turn 13 saw him slip to fourth, where he will be joined on row two by another late crasher Jules Cluzel (CIA Landlord Insurance Honda) and Niki Tuuli (Kallio Racing).

“That was a very difficult Superpole but not because of our speed. Just before Superpole we had a crash and there was quite a lot of damage on the bike. The team worked really hard until Superpole began to build the bike again. When I started Superpole I understood that not everything was not exactly how I had used it before. So I came back in to help the team to make the changes. Superpole is only 15 minutes long, so there was a lot of stress for everybody. But we did well and this Superpole win is for my team. I am happy for them because when I saw how hard they worked on the bike and I really wanted to give them pole position. Starting from pole is very good but most importantly we are very strong in race simulations. Tomorrow when the tyre drops I think and believe that my advantage will start. I hope to go for another race victory tomorrow.” 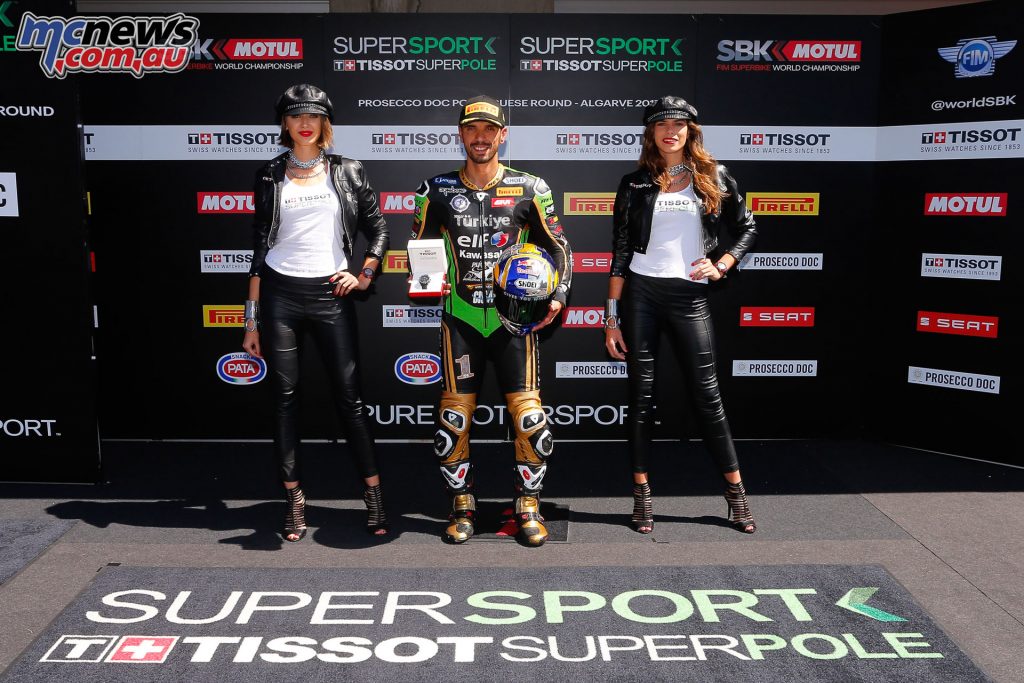 “I am very happy as it was a very good qualifying session! It was a bit of a surprise for me because at the beginning of the weekend I struggled with my confidence on the bike and my lap times haven’t been great. I am happy because I worked a lot with my mechanics to improve the bike, we changed some settings and for qualification, it was a completely different bike. During SP2 was the first time I had followed a rider all weekend and it was easier. I was behind my teammate Federico and it gave me an advantage. I am happy because tomorrow should be a good race and it will be very close. That is great for the championship, and for the fans, but for the riders, it is very difficult!” 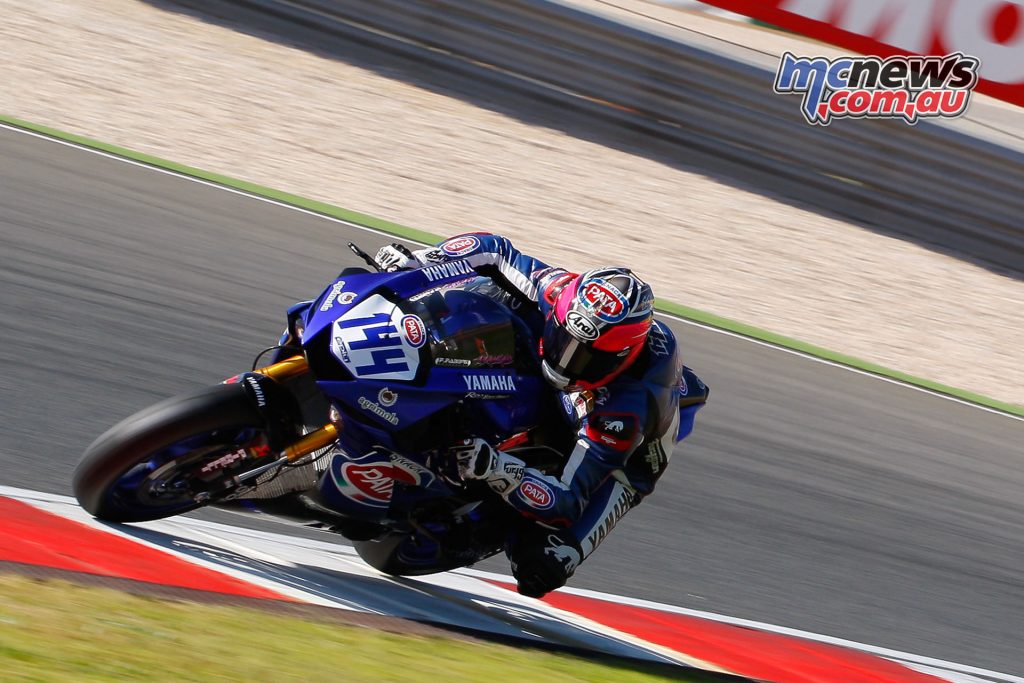 As the FIM Supersport 300 World Championship Superpole action got underway around the Portimao circuit under the September sunshine, it was Alfonso Coppola (SK Racing) who secured pole position in a thrilling session, as the title fight heats up.

SK Racing duo of Jacopo Facco and Coppola were able to sail through in Superpole One, leading the session by over a second from the rest of the field as 27 riders battled it out around the Autodromo Internacional do Algarve. Setting a lap time of 2.01.035s, Italian Facco and compatriot Coppola were the only riders to get into the 2.01 lap times as the series makes its debut around the undulating circuit.

Coppola headed into the second Superpole session with all guns blazing, and was one of the riders to move to the top of the session in the early stages. However the Italian faced stiff competition from Paolo Grassia (3ENNE#Racing – Chiodo Moto) and Championship leader Marc Garcia (Halcourier Racing), amongst others as the timing screens began to light up in the final three minutes.

In some final seconds of drama, championship contender Mika Perez (WILSport Racedays) was able to shoot up into pole position but had his lap time cancelled, after the rider exceeded track limits. Unable to make it over the line in time to secure another lap, meaning he will start from 11th position on the grid.

Meanwhile Garcia secured provisional pole position with a stunning lap time, before being pipped to the line by Coppola, who set a lap time of 2.00.128. Ana Carrasco (ETG Racing) stunningly secured third position on the grid with her Kawasaki Ninja 300, making her the first female to have secured a front row in WorldSSP300.

Robert Schotman (GRT Yamaha Official WorldSSP300 Team) will start the race at the front of the second row of the grid, ahead of Borja Sanchez (Halcourier Racing) and Scott Deroue (MTM HS Kawasaki).

“It is a difficult weekend but I was able to keep calm and to keep in mind the slow sectors and it was great work for myself and team and we were able to get some good set-ups for both Superpoles, which meant I was able to get through both sessions and get pole position.”