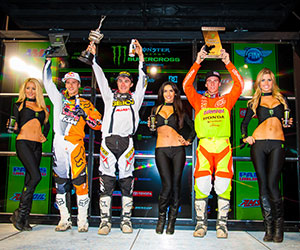 Western Regional 250SX Class Main Event with a dominant win besting he field with a 6.44 second margin of victory.

On Lap 8, while working his way through the field, Villopoto crashed and dropped several positions before re-entering the race. Red Bull KTM’s Ryan Dungey, of Belle Plaine, Minn., held down the fourth position and began making up time on Barcia, but on lap 15, he crashed in a turn. After waiting patiently for 16 laps, Canard made his move around Millsaps for the lead, and on the same lap, Barcia suffered a crash. Millsaps made a last-ditch effort on Canard, zipping through the whoops around Canard for the win. Canard finished second and Dungey finished third.

“It was a great night for me,” said Millsaps. “This is my first win since 2010, and I was just trying to keep calm out there. It has been a long time since I have led a race, so it was hard to calm my nerves.” 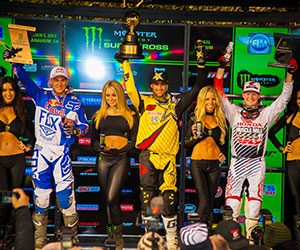 Lucas Oil/Troy Less Designs Honda’s Cole Seely, of Newbury Park, Calif., opened the 250SX Class Main Event with the Nuclear Cowboyz Holeshot. Following turn one, he was one of several riders, including Heat Race winner Martin Davalos, of the Monster Energy/Pro Circuit/Kawasaki team, that were involved in a crash. Tomac, the defending 250SX Class Champion, assumed the lead as Malcolm Stewart, of Haines City, Fla., moved into second followed by Ken Roczen, of Germany, in third.

On lap 1, Roczen, who rides for the Red Bull KTM team, passed Stewart for second place. After winning the holeshot, Seely dropped to fourth place, but passed Stewart on lap 6 to secure third place. Tomac’s win marked the eighth of his career. Roczen finished second and Seely finished third.

“I had a tough Heat Race, and that was kind of a wake-up call for me,” said Tomac. “This is how I wanted to start the season. I did a few off-season races, like the Monster Energy Cup, and that kept me in shape.”

TwoTwo Motorsports Chad Reed has finished a credible fourth, in the opening round of the 2013 Monster Energy AMA Supercross, an FIM World Championship, at Anaheim’s Angel Stadium tonight.

The Australian, who ran a number of changes throughout practice, finished his heat race seventh.

Fifth off the start in the 450 SX Main Event, Reed kept pace with the front-runners over the opening laps of the race.

While the first four started to pull a gap, Reed continued to lap consistently and moved up into fourth after Justin Barcia went down in the whoops on Lap 17.

Taking a solid haul of points from tonight’s event, Reed acknowledged it was important to start the season with a good point scoring result.

“We have come away with some good points tonight but I wasn’t entirely happy with my result.” Reed admitted

“There are 16 races ahead and tonight was about seeing where we all stacked up. I wanted to come away with some good points and we achieved that.

“It is great to have the first race in the can, we now know what work we have to do ahead of Phoenix,” Reed said.

TwoTwo Motorsports will now prepare for next weekends second round of the 2013 Monster Energry AMA Supercross at Phoenix Chase Field.

Red Bull KTM Factory rider Ryan Dungey finished third overall on the KTM 450 in the opening round of the 2013 SX season at Anaheim on Saturday night and Germany’s Ken Roczen scored a podium second in the SX Lites West riding the KTM 250. In 2013 Marvin Musquin is contesting the SX Lites East competition.

While Dungey had solid practice times and survived several spills in his heat race to finish sixth to qualify for the main event of the night. He got off to a better start in the main and rounded the first corner in fourth to begin a four-rider battle for the lead with Davi Millsaps, Trey Canard and Justin Barcia. Dungey pressured Barcia for third for the first ten laps but when in striking distance he again when down in a small crash and lost some ground and valuable time. Then in the next lap it was Barcia who crashed and Dungey moved into third and held on to the podium spot to the checkered flag..

“I am excited to get on the podium at this race,” remarked Dungey. “It is a long series and it is good to get a podium finish at the first round to get us off on a right start. Last year, we had a great race at the second round of the series and I am looking forward to going to Phoenix next week and hopefully moving up on the podium.”

It was also a good start to the season for the factory team’s young German rider, Ken Roczen who took a second overall in the opener of the SX Lites West Coast. Roczen impressed the sold out crowd with a great performance to earn his first podium of the season after turning heads earlier in the day after setting a blistering pace in the first practice. He also clocked the second fastest time in the following two timed practice sessions.

Roczen got a great jump off the start of the first 250 Supercross heat. He was second after the first corner and passed Jessy Nelson for the lead half way through the next lap to go on an win his first heat of the season.

In the main event, Roczen again put himself in great position when he avoided a huge pile up in the in the first rhythm section and was in third place. He then made the move on Malcolm Stewart to advance to second. But early in the race Roczen cased a jump and jammed his wrist so he after the race he said he then focused on maintaining his second position in the 15-lap main. ‘Mookie’ Stewart also had a good night out, bringing the JDR KTM machine home in fifth overall.

After the race, Roczen commented, “You can’t win the championship at the first race, but you can lose it. I am glad that I was able to finish on the podium and put my team in good position for the championship.”

The new-look Dodge/ Sycuan Casino/ RCH Racing/ Bel-Ray/ Suzuki Racing Team had an evening of mixed results at the opening round of the 2013 Monster Energy Supercross Series season on Saturday at jammed-packed Angel Stadium in Anaheim, California.

Former AMA Lites Champion Broc Tickle was on the pace for a top-10 finish aboard his RM-Z450 when a mid-race mishap with two-time defending series champion Ryan Villopoto dropped the first-year RCH rider 10 positions and out of the race contention in 18th.

Tickle started 12th in the 20-lap Main Event. He broke inside the top 10 by lap five and was racing fork-to-fork with Villopoto when misfortune struck on the eighth lap when he found himself in the wrong place at the wrong time and couldn’t avoid the havoc in front of him.

Said Tickle: “I didn’t see much until I got right up on him. He must have hit the tuff block when he landed because they were all across the track. I dodged one, dodged his bike but ran into ‘Villo’ and crashed. It’s a bummer for everyone on the team but we’re ‘outta here healthy and I’m looking forward to next week in Phoenix.

The Michigan native was solid throughout the event aboard the Tony Berluti-tuned Suzuki. He rode mid-pack in both afternoon practice sessions and finished sixth in his Heat Race for an automatic transfer to the Main Event. Tickle was impressive in his heat, rebounding after getting pinched in the first turn which dropped him five positions in the eight-lap race, but he regained four spots over the final four laps on the ultra-fast Anaheim track.

“We had a really good day until the Main Event,” said Berluti. “Broc was running about 10th; he and Ryan Villopoto were battling hard for a few laps, then Villopoto hit a tuff block and knocked it out of place and Broc had nowhere to go. It took Broc a few seconds to get back going, but by then he was all the way back in 20th.

Team-mate Josh Hill suffered his second-consecutive, season-opening disappointment after the Oregon rider wobbled his Suzuki during the first qualifying practice, cross-rutting a portion of the rhythm section which sent him to the dirt.

Hill’s head-banging tumble forced the second-year RCH rider to sit out the remaining event schedule and was evaluated by medical personnel for precautionary reasons. Hill suffered a broken left leg at last year’s season opener which side-lined him for the majority of the season.

Said Hill’s mechanic Shawn Bell: “Kind of a bummer. Josh had a little trouble when he cross-rutted coming through the rhythm section and put the bike down. He banged his head a little bit and we thought it was the best option to have him looked at and hold him out of the race.

“He was good in practice. We had high expectations coming into tonight and we got bit by a gremlin. We’ve waited for this all off season, it’s been pretty gnarly getting ready for Anaheim and everyone was looking forward to tonight’s race.” 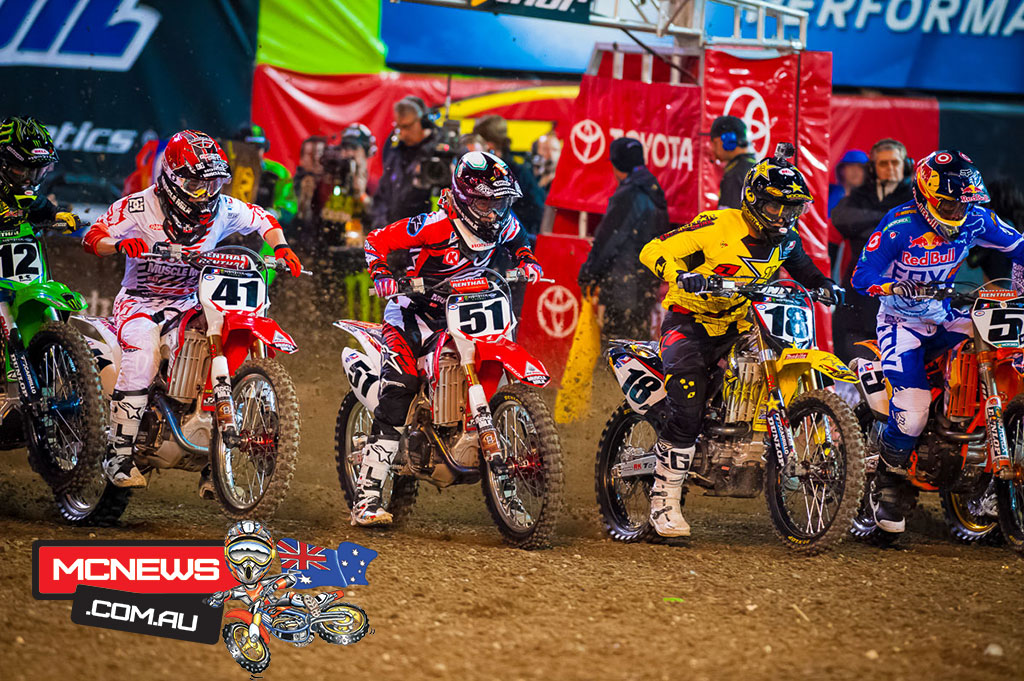 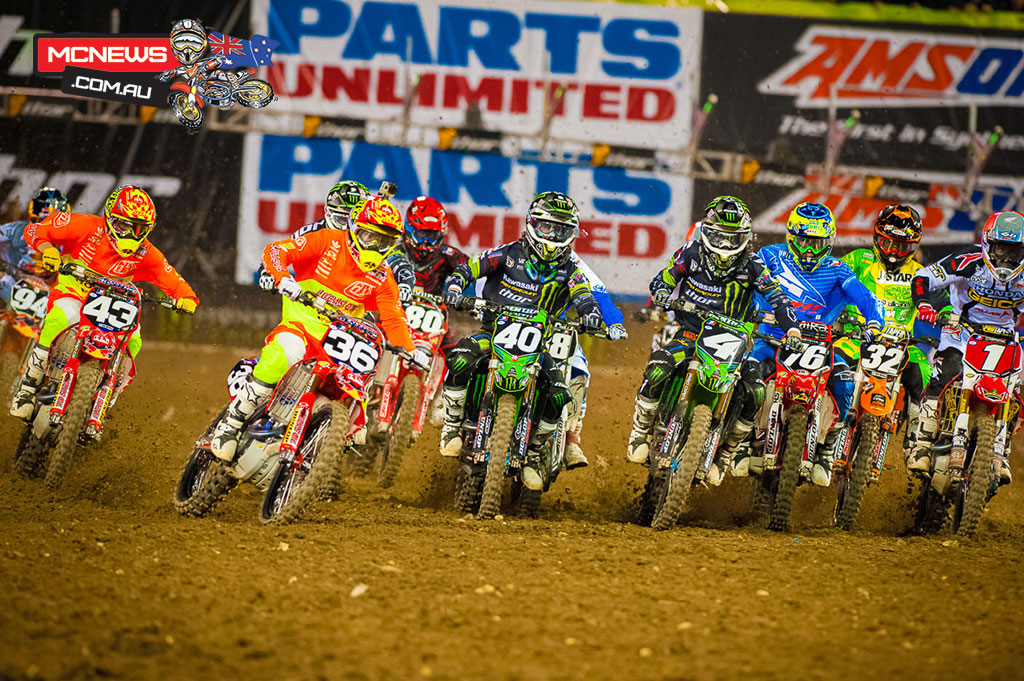