Thousands of avid motocross fans braved the heat on Saturday to cheer on the world’s best motocross riders as legendary RedBud USA hosted the sixth round of the Lucas Oil Pro Motocross Championship, sanctioned by AMA Pro Racing. As the season reached its halfway point, Red Bull KTM’s Ryan Dungey, of Belle Plaine, Minn., kept his dominant run going in the 450 Class, wining his fourth straight race with another 1-1 moto sweep. In the 250 Class, Monster Energy/Pro Circuit/Kawasaki’s Blake Baggett, of Grand Terrace, Calif., raced to his third victory of the season and second in-a-row with an impressive 1-1 effort. 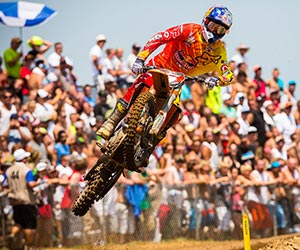 In the opening 450 Class moto, it was Dungey who prevailed out of the gate, establishing himself as the rider to beat early while Team Yoshimura Suzuki’s James Stewart, of Haines City, Fla., followed in second in his return to action.

As Dungey pushed to open a gap on Stewart, the Suzuki rider went down, allowing Monster Energy Kawasaki’s Jake Weimer, of Rupert, Idaho, and Team Honda Muscle Milk’s Justin Brayton, of Ft. Dodge, Iowa, to move past. On the following lap, Stewart encountered misfortune again, stalling his bike and falling to seventh. He eventually worked his way to a sixth-place result.

Out front, Dungey took the checkered flag by over 45 seconds ahead of the field.

In Moto 2, MotoConcepts Suzuki’s Mike Alessi, of Victorville, Calif., grabbed the holeshot and led early, but it didn’t take long for Dungey to take over the top spot and pull away. Alessi, who was involved in a first-turn crash in the first moto, settled into second for the remainder of the moto, while Stewart bounced back to run third.

“Having James (Stewart) back this week was good to add another challenge, and it’s good for the sport,” said Dungey. “We made some more changes to the bike coming into (today) and I think we’ve made even more progress. My starts were good and I knew getting out front would make life easier, having a whole track to work with. It’s (too) early to think points, but you’ve got to be smart. With James back, you knew he’d be there, so I didn’t want to downplay him. I just wanted to get a good start and see how things played out.”

Brayton brought home his first overall podium result of the season in second (3-4), while Stewart finished third (3-6) despite his troubles.

Dungey extended his lead in the 450 Class standings to 72 points over Alessi. 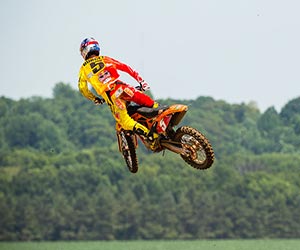 In the 250 Class, Baggett needed a pair of come-from-behind performances to take the win. After crossing the line in sixth at the conclusion of the first lap in Moto 1, Baggett began a charge to the front of the field. He quickly picked off riders to move into second by Lap 5 and overcame a five-second deficit to pass GEICO Honda’s Justin Barcia, of Monroe, N.Y., for the lead on Lap 12 and pull away.

In Moto 2, Baggett put himself in a better position, coming out of the gate in third and working his way to the front of the field by the conclusion of the opening lap. On Lap 2, a mistake forced Baggett to fall, allowing Barcia to take over the lead.

After losing just one spot, Baggett once again set his sights on the lead and managed to take over the position again on Lap 8, holding it through to the finish.

“This track is one of the best on the schedule, its got a little bit of everything,” said Baggett. “There’s no formula to the way I ride. It just happens. I had a pitiful start in the first moto and fought my way through the pack. I got a good start in the second moto and just tipped it over. I looked at lines to see where I could pick up ground and I just took a shot (at the lead) when I had a chance.”

Baggett extended his lead in the championship to 19 points over Barcia.

The 2012 Lucas Oil Pro Motocross Championship continues next Saturday, July 14, with round seven from Spring Creek MX Park in Millville, Minn., and the Spring Creek National. 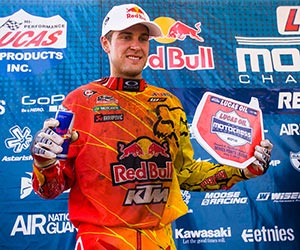 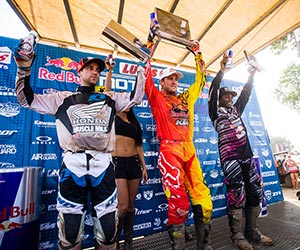 Red Bull/KTM Factory rider Ryan Dungey wowed the crowd to claim a claim 1-1 result for his fourth straight victory of the season in 450 Motocross class at the sixth round of the Lucas Oil Pro Motocross Championship Series held at Red Bud MX Park, Buchanan, Michigan.

While Dungey snatched his seventh and eighth moto wins of the season in searing temperatures while a heat wave affects much of the USA, Marvin Musquin and Ken Roczen also pulled off another top five result in the 250 cc class.

Dungey qualified fastest in the morning practice sessions and proved that he was the man to beat when he won both motos in brutal 38 degree Celsius temperatures at Red Bud MX Park. He then grabbed the holeshot and surged to an early lead in the first moto, led the entire way and crossed the line 45 seconds ahead of his next rival.

He was third at the first corner in the second heat but slipped past Christian Craig to move up to second in lap 2 before passing Mike Alessi for the lead one lap later. From that point Dungey never looked back and took the flag 3 seconds over the second placed rider.

“It feels good to get another win here at Red Bud,” remarked Dungey after the first moto win. “I am really happy with my bike set-up today. The conditions are tough and I know it’s only going to be hotter and rougher for the second moto. I want to give a shout out to all the fans that are here today. They are amazing lining the fence and cheering us on in this heat.”

Dungey’s victory at Red Bud strengthened his lead in the championship points and allows him to continue to carry the red plate to round seven of the Lucas Oil Pro Motocross Championship Series held in his home state of Minnesota on July 14, 2012.

Solid top fives for Musquin and Roczen
Despite the heat, rRed Bull/KTM’s Marvin Musquin and Ken Roczen were also in good form to finish 4th and 5th respectively overall in the 250 Motocross class.

French rider Musquin claimed the holeshot in the opening moto and held the lead for the first two laps before losing a position to Justin Barcia. Meanwhile, his Red Bull/KTM teammate was not far behind in 4th place at the end of the second lap. The two KTM teammates battled inside the top five right through the moto but it was Roczen ahead of Musquin in a 3-4 finish at the end of the race. The tables turned in the second moto. Musquin again got off to a great start and rounded the first turn in third position. He fought around the position the entire moto eventually only dropping one spot to finish 4th. His 4-4 finishes earned him fourth place for the day.

“I am very happy to get fourth today,” reported Musquin. “I am getting closer to a podium spot each week. I had some great starts today and I just need to work on my speed at the end of the moto to compete for a podium spot.”

Roczen, KTM’s teenager from Germany did not get away well in the second moto and had to carve through the pack from tenth place to eventually finish sixth overall. It was the first time this season that Roczen had not finished on the podium.

“I am bummed to not finish on the podium,” remarked Roczen. “This race was challenging today. It was hot and humid and in the second moto it got really rough and was hard to make passes. I am glad to still finish in the top five and I know where I can make improvements. I am looking forward to the next few rounds.”