With the fences and grandstands packed with eager fans and a keen audience for MXGP (official figure of 36,000) the premier class began on a drying course but with the mud still very soft and difficult to judge.

Practice and qualification on Saturday had been reduced to just one session because of the conditions and as the 30 minute and 2 lap race on Sunday ticked down areas of the 1600m layout became extremely rutted and sticky.

The MXGP racing was demanding in Indonesia but Wilvo Yamaha MXGP’s Shaun Simpson handled it better than anyone and supplied an impressive win.

Simpson finished just over 7 seconds ahead of Red Bull KTM Factory Racing’s Glenn Coldenhoff. The Dutch rider rode a consistent race and maintained his speed lap after lap for his first podium of the year.

“Fantastic, but a little surreal. It was nice to get off to a good start. I didn’t go out on the sighting lap so I was a little unsure but I talked to the team manager, Louis, and he told me about some good lines so I had a good idea about where I needed to go. I started sixth or seventh and picked off a couple of guys and I knew that once I got past Tim Gajser for fifth that I could get to the front.”

“It was a great moto. I had a great start – thanks to the team for that because we changed a few things and now I’m really happy – and got into the lead. I rode easy but there was one part of the track that was really difficult; I got through it every lap and this was the key. I put all my energy in that one section. I’m really happy with second place and the team have done a great job; I have a lot of confidence in the bike and I’m looking forward to Argentina already.”

In third was Monster Energy Kawasaki Racing Team’s Clement Desalle, who looked aggressive for the full race and in the end he was closing in finishing less than 5 seconds behind Coldenhoff.

“I could be satisfied with this podium, but I’m not totally happy as this GP was very special and I think that teams and riders should be given more consideration and respect. For sure I’m happy to go back home safe, what can I say otherwise about this race? I got a decent start from my sixteenth position on the grid, and then managed to avoid any big mistake in the tricky sections of the track. It looked like an enduro in one section, and fortunately I go riding enduro with friends in Belgium so maybe that helped me! After these first two GPs I’d like to thanks my team for their support; we have a very close relationship this year as we now know each other very well. I feel completely at home on my bike, and each weekend we make yet more improvements so I’m happy and confident for the upcoming races.”

Last week’s winner and red plate holder, Red Bull KTM Factory Racing’s Antonio Cairoli, didn’t see the results of before but he managed to finish 4th overall and will continue to hold the red plate.

“I’m really happy actually because the track was really difficult and it was easy to lose a lot of points. I didn’t have such a good start and managed to make some good passes while others got stuck. I ended up with fourth place which is good for the championship and we still have an eight point lead. We were happy that the Jury decided to stop the second race because the track was becoming very tricky and very dangerous. We’ll go home now, reset and do some training and tests to be ready for Argentina which is a track I really like and one of my favourites.”

Finishing strong in the final spot of the top five was Husqvarna 8Biano Racing’s Rui Gonçalves.

Monster Energy Yamaha Factory Racing’s Romain Febvre had a blistering start and came away with the Fox Holeshot, though later in the race he had issues and would place 15th overall.

“I had some pain on my shoulder but I was still riding good, so to not finish because I was stuck, it’s even worse. I didn’t do the sighting lap to save the bike, so when I pulled the holeshot and didn’t jump the first jump many guys passed me, but I found my rhythm pretty fast, I just got stuck.”

“It was a bit of a mess this weekend to be honest. With all the mud and the rain, I am quite happy I have taken solid points from this weekend. The first race felt like it was a case of surviving the race it wasn’t ‘racing’. I felt like I was normal for the first 10-15 minutes, I was in second place and almost catching the leader and then I just suddenly destroyed myself and I am not really sure why or how it happened, I just didn’t feel my best. I just ride until the end to get points. Overall I am not actually that happy with the weekend and my results overall but sometimes the bad races are not so bad and we have a chance to have a break and get ready for a better race in Argentina.”

After two treacherously difficult motos in the deep mud of Indonesia, MX2 overall results were counted using both races and it was Suzuki World MX2 Team’s Jeremy Seewer who was the best MX2 rider in Pangkal Pinang.

It rounded-off a great day for the Swiss rider as he was able to win his first ever race in the first moto with a clever approach that minimised any mistakes and kept himself on two wheels while everyone around him crashed. 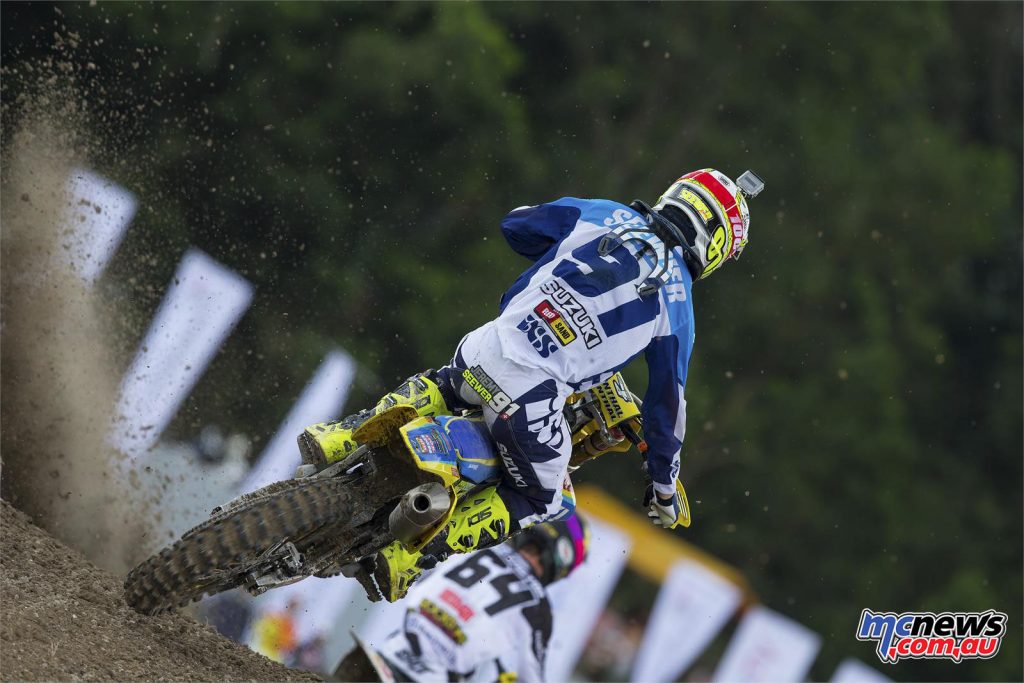 “First moto, I got a bad start and I was thinking back to Qatar, and how it can’t happen again, but the first turn because of my good gate-pick I could turn-up the inside and still come out fifth. Some guys were then flying past me and I thought maybe I was going too slow, but then the next lap, they’d get stuck. I just kept going, racing my own race and then suddenly on the pit board I saw I was in first. I just tried to finish it and that’s how it ended up. In mud races it isn’t about doing the fastest laps, it’s about surviving, you need to make your laps without mistakes because if you make a mistake, you are dead. I’m just happy though, we’ve come a long way to get here, and to get the win is massive.”

In the first race Bernardini finished 8th but the focus for him was the fact he had won his first MX2 race, the combination of both races put him into second overall which was also his first GP podium. 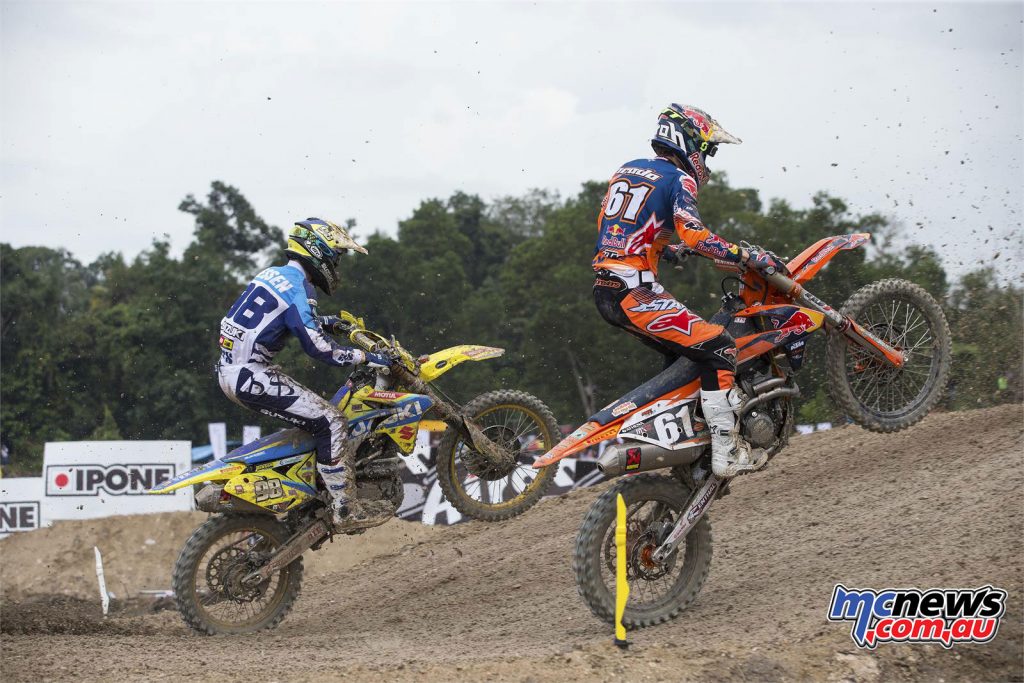 It was indeed a testing day for the riders of MX2 and the third highest result for the second week in a row came from LRT KTM’s Julien Lieber, his performance gives him the MX2 points lead heading into the MXGP of Patagonia Argentina.

Rockstar Energy Husqvarna Factory Racing’s Thomas Kjer Olsen finished 4th for the second week in a row. Last year’s EMX250 Champion is showing everyone he consistently has what it takes to compete in the MX2 class.

“It was a good race for us. My speed was good despite tough track conditions. I got a mediocre start in the opening moto but I pushed hard to provisionally climb to fourth. It was so hard to get a decent rhythm in these conditions, unfortunately I pushed too hard and crashed two times. I did my best in moto two and was fifth when the race ended. To finish fourth under these circumstances is hugely positive for me and the team. We’re still fourth overall in the championship standings and this season has still a long way to go. The speed is there so it’s up to us now to continue battling for the top three in the MX2 class.”

The second race proved to be slightly more challenging for the Dutchman in which he would finish 14th. The KTM rider’s stellar performance in race one carried him into 5th overall on the weekend.

There was also good news in race two as Seewer got the holeshot, closely followed by fellow Suzuki rider Hunter Lawrence; who came from the middle of the gate to sweep into second place round the first corner.

Unfortunately, the young Australian’s day wouldn’t go exactly to plan in terms of results, but at certain times of the race, he was easily the fastest rider out on the track.

“Speed is good, but I’m not happy with the results although really, anything could have happened in those conditions. The first moto I got a great start, fourth around the first turn but then I had a couple of crashes and the second one I got the bike stuck in a big bog-hole and I couldn’t get the bike out. They needed like four-or-five guys to get my bike out so I ended up outside the top 20. The second moto I again got a good start, right behind Jeremy, so a good day for the Suzukis off the start line. I then again had a couple of crashes before they red-flagged the race, so not great. Just happy to be coming home in one piece as it was like a minefield out there.”