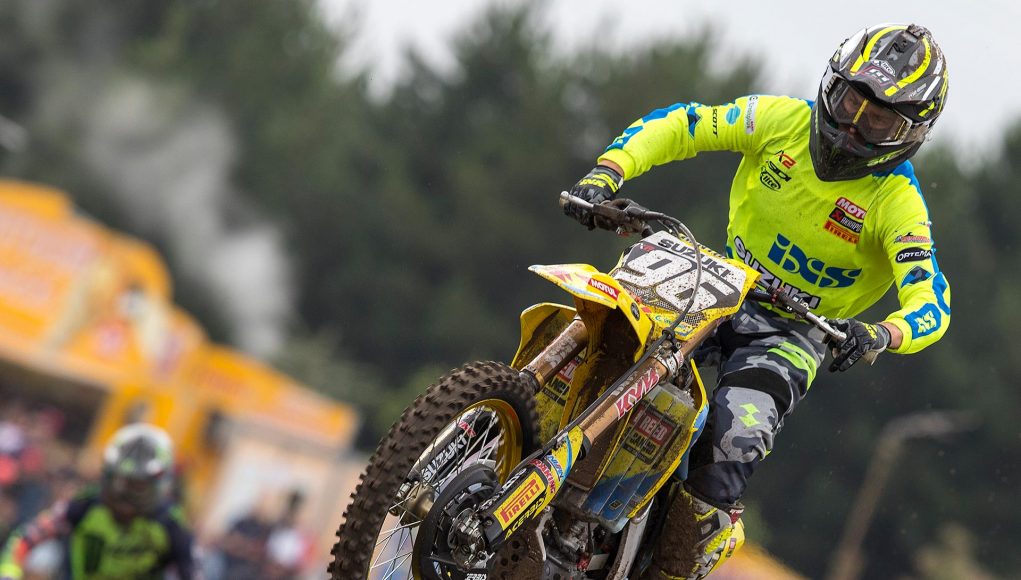 Riding a very consistent qualifying moto, Hunter Lawrence who didn’t have too much company on his way to a sixth-place finish in the qualifying MX2 Moto at Lommel overnight.

“I struggled in timed practice to get a good lap in as after about three laps we got one year’s worth of rain in the space of five minutes. I think at one stage I was the only rider on the track but I needed to try and get a good lap posted. In the end I got 17th gate pick for the qualifying race which ended up going well. I got a top-10 start and made some passes and tried to keep my head screwed on in the tough conditions. I did a bit of enduro riding, rather than race the track and it seemed to work as I brought it home in sixth place.”

After putting in some strong work this week, Jed Beaton had a strong start out the gate, managing to keep with the pack. With a track that is already a challenge, the start made his life easier by avoiding having to work his way through the group. The Aussie had a consistent race, pushing for places through the sodden Belgium sands. After a small mistake which threw his rhythm mid race, Jed came in 15th.

“Qualifying today was actually pretty good. The biggest thing was that I actually managed to get off the gate with everyone else today! I know I lost my rhythm in the middle of the race and lost a few sports. The track was pretty difficult with a lot of water around and deep ruts so it was pretty hard to ride. There was some corners that was fully underwater which made it hard to move across the track to the other lines as it was just slop! Hopefully tomorrow will be a little bit drier and it will change the tracing conditions and make it better to ride in.”

The first day of the Fiat Professional MXGP of Belgium is complete and the sand master, Red Bull KTM Factory Racing’s Jeffrey Herlings fired the first shot winning the MXGP Qualifying Race while his KTM teammate Pauls Jonass secured pole position in MX2. The thunder of the MXGP and MX2 bikes was accompanied by rain in the early stages of the day taking an already treacherous surface to a new level of difficulty. The heavy Belgian sand of Lommel is in a new layout and direction this year which so far has provided great racing.

The big boys of MXGP and MX2 were also joined by the Honda 150 European Championship and the 2 strokes of both EMX125 Presented by FMF Racing and EMX300 Presented by FMF Racing. In the 125cc class 74 racers entered the day with only 40 making it through qualifying. Race 1 started with BUD Racing Monster Energy’s Brian Strubhart Moreau leading Gianluca Facchetti and Alessandro Manucci but on the third lap mistakes took all of them out of the top 3. The one rider who didn’t have any costly errors was Rockstar Energy Husqvarna Factory Racing’s Mikkel Haarup who moved into the lead on lap 4 and stayed in the top spot the remainder of the race to take the win. Behind Haarup was Creymert Racing’s Kevin Horgmo and Facchetti, who fought his way back by Moreau to take third.

Aboard the 300cc bikes GL12 Racing’s Mike Kras led early with Brad Anderson in hot pursuit. The pair of KTM’s shifted back in forth in a battle for the race win. Micheal Hool had a front row seat to the racing as he ran third the entire race. The final result was Anderson crossing the finish first with Kras 2nd and Hool 3rd.

The Honda 150 European Championship’s first race of the weekend was won by Anton Nordstrom Graaf with Luis Outeiro 2nd and Kjeld Stuurman 3rd.

Cairoli was beat out by Rockstar Energy Husqvarna Factory Racing’s Max Nagl. It only took one lap for Cairoli to take over the lead from the German and begin to leave the field behind. As Cairoli led the race Team HRC’s Tim Gajser moved passed Monster Energy Yamaha Factory MXGP Team’s Jeremy Van Horebeek and then Max Nagl for second.

The majority of the passes were going on behind the top two and they were made by Jeffrey Herlings, the “Bullet”. From 6th Herlings passed 4 riders in 3 laps. From there he began to chip away at #222’s lead.

Following the moves of Herlings was Team Suzuki World MXGP’s Arminas Jasikonis on his way toward third.

Gajser dropped to 4th on the 5th lap just ahead of Nagl. Monster Energy Yamaha Factory MXGP Team’s Romain Febvre was riding on the bubble of the top five the entire race and it wasn’t until the final lap that he made a pass on Nagl to secure 5th.

Back at the front it was another last lap pass that made the difference but instead it was for the win. Herlings took the lead with half of the last lap to go and crossed the finish half a second ahead of Cairoli.

While Jasikonis crossed the line 3rd, failure to comply with FIM noise regulations penalized him 5 positions to 8th officially. The final result was Gajser 3rd, Febvre 4th, and Nagl 5th.

Herlings in the press conference said: “I’m very happy with the result, it is a track that fits me well. I’m happy with today, being in pole position again, I think it is the second time this season, I haven’t had it many times but I’m focused for tomorrow.”

MX2 Qualifying started with Red Bull KTM Factory Racing’s Jorge Prado leading and Kemea Yamaha Official MX2’s Benoit Paturel following. Paturel who put in the fastest laps of both Free and Time practice was the first to line up to the gate.

Championship leader, Red Bull KTM Factory Racing’s Pauls Jonass was only a few bike lengths behind the top two though and in a section were most riders dropped into a hole he jumped over it. Jonass and his creative riding were clearly effective in that exact section he flew by Paturel into second.

The main competition for Jonass and his championship hopes is the Suzuki World MX2 rider Jeremy Seewer. Perhaps one of the reasons Jonass quickly dispatched Paturel was the #91 hounding his back wheel.

Running 5th behind Seewer was the Rockstar Energy Husqvarna Factory bike of Thomas Kjer Olsen. With Seewer seeing Jonass go by Paturel he didn’t want to be left behind but a series of small bobbles left Paturel able to fend the Swiss rider off.

Jonass in turn was catching Prado and made the pass for lead on lap 8 of ten. Prado was also losing ground to Paturel when he slowed by a lapped rider who was down in his line. This allowed both Paturel and Seewer by.

At the finish Prado took fourth ahead of Olsen while Jonass won and Paturel held second in front of Seewer.

Jonass in the press conference: “I got a decent start I was third so I settled down in the first laps and just built up my race speed. You know in the first laps you can go crazy and make some mistakes but I just stayed calm. I got the win and it was nice so I’m looking forward to tomorrow”