The Monster 1200 is the most powerful and sophisticated model of the Monster family, equipped with a 1200 cc Testastretta 11° DS “R” version twin-cylinder engine, the Monster 1200 R takes the Ducati naked sports bike concept to the extreme.

Compared to the Monster 1200 S engine, the twin-cylinder “R” version delivers 10% more power and 5.5% more torque. Its 160hp and 97 lb-ft torque turn the Monster 1200 R into a naked supersport bike able to show its true colours on a race track. Plus a higher stance than the Monster 1200 S, for more extreme lean angles and to make the most of the Pirelli Diablo Supercorsa SP tyres.

The “R” spirit that inspired the Monster 1200 is recognisable in its completely redesigned, compact, lightweight and high-slung tailpiece, seat and high-mounted plate holder.

The Monster 1200 R is equipped with new suspension and Öhlins steering damper, and separate rider and passenger footpegs to enhance its racing-inspired riding experience. The naked sports model by Ducati is even lighter than the S version thanks to the tailpiece, forged wheels, and carbon-fibre components – bringing the total dry weight down to 180kg.

This motorcycle’s higher stance features an increased gap between the tyre and seat assembly, making the rear look more streamlined, further enhanced by the design of the high-mounted aluminium plate holder, fully exposing the 200/55 rear tyre. Both the rear and the front tyres are mounted on three-spoke, Panigale R-inspired forged wheels.

The finishing touches to the Monster 1200 R design can be seen in the nose fairing and the longitudinal graphic pattern inspired by the iconic Ducati Corse stripe. The radiator metal covers have a graphic “R” design obtained by sand-blasting, while the bi-material seat has contrasting seams and a metal plate bearing the name of the model.

The Monster 1200 R is powered by the “R” version of the liquid-cooled 1198cc Testastretta 11° DS engine with 4 valves per cylinder. The Monster 1200 engine version has been revised to increase its efficiency to a maximum power of 160hp (117.7kW) at 9,250rpm and a maximum torque of 97 lb-ft at 7,750rpm, while maintaining smooth delivery at low and medium RPM. The Monster 1200 R engine is in line with the Euro 4 pollution control standards.

The Monster 1200 R’s Testastretta 11° Dual Spark engine is equipped with a two-into-one-into-two exhaust system with 58mm diameter pipes and redesigned twin silencers. Although their routing has not been changed, the exhaust pipes have a cross-section with a diameter that’s been increased by 8mm to boost engine efficiency which breathes better thanks to a new throttle body.

The original round design with 53mm diameter bodies featured on the Monster 1200 has been replaced by a larger, oval section design with a 56mm equivalent diameter. A lower-height cylinder seal has made it possible to increase the compression ratio from 12.5:1 to 13:1, improving combustion efficiency.

Compared to the twin-cylinder version powering the Monster 1200 S, the “thrust” of the “R” version remains strong and vigorous beyond 7,000 rpm, adding extra power and torque throughout the rev range. During road use, at lower RPM, delivery is consistently smooth and responsive to throttle opening, with 75% of the torque already available at 3,500 rpm.

The Monster has a wet clutch with ‘slipper’ function actuated by a Brembo master cylinder. Thanks to its progressive self-servo mechanism, it can be operated smoothly and progressively.

The signature Trellis frame remains a feature of the Monster 1200 R, with attachment points directly on the cylinder heads, a race-derived solution pioneered by the Panigale for the first time in the world of production motorcycles. Thanks to this configuration, the resulting frame is highly compact and lightweight and, with large cross-section pipes, it offers massive torsional strength.

The rear sub-frame is also attached directly to the engine, creating a compact structure designed to support the passenger footpeg brackets – now a separate design from the rider’s. The rider and passenger footpeg mountings are forged aluminium and support aluminium billet-machined footrests with a surface pattern designed for enhanced boot grip during riding. The rider’s footpegs have aluminium heel guards.

To ensure lean angles suitable for track use, the chassis set-up has been raised by 15 mm both at the front and at the rear end, and the seating height has been adjusted to 830mm accordingly. The ‘ergonomics triangle’ has been preserved to ensure a natural riding position and improved control during both road and track use and help the rider complete more laps with less effort.

Another major focus of attention was weight reduction. The tailpiece, wheels, carbon fibre parts and the footpegs together made for a 2kg weight saving – down to a total dry weight of 180 kg. A critical factor in weight saving was the use of forged wheels – making the Monster R even more agile in tackling corners thanks to the reduction in unsprung weight and inertia.

The high-tech suspension system features fully adjustable 48mm titanium nitride-coated Öhlins forks with black-anodised bottoms and bodies and a fully adjustable Öhlins rear shock. Operating through a progressive linkage, the rear suspension attaches directly from the rear vertical cylinder to the die-cast aluminium single-sided swingarm at the opposite end.

The Öhlins suspension package is completed by the adjustable steering damper that controls handlebar movement under heavy acceleration and enhances the sports inspiration of the instrument panel view.

The Monster 1200 R braking system is the very best of the Brembo production range and includes twin radially-mounted M50 Monobloc callipers gripping 330mm discs at the front – the same components that are part of the equipment of the 1299 Panigale supersport model, actuated by a master cylinder with remote reservoir. At the rear, the Monster 1200 R features one 245mm disc gripped by a single Brembo calliper with sintered friction material pads to improve efficiency. The braking system is controlled by the triple stage ABS Bosch 9MP system – which can be disabled by the user.

The Monster 1200 R features 3-spoke light alloy forged wheels inspired by the Panigale R design and is fitted with Pirelli DIABLO Supercorsa SP tyres – 120/70 ZR17 at the front and 200/55 x ZR17 at the rear.

The Monster 1200 R standard equipment includes a Bosch ABS 9MP controlled Brembo braking system with an integrated pressure sensor as part of the Ducati Safety Pack (DSP). The 3-level system provides shorter stopping distances with enhanced stability in any riding condition by being fully integrated with the Riding Modes.

The system offers eight ‘sensitivity profiles’, each set to offer a level of rear wheel-spin tolerance in line with progressive levels of riding skills, classified from one to eight. Level one is programmed to offer the least amount of interaction while level eight uses the highest degree of interaction.

DTC levels are factory pre-set in each of the three Riding Modes, but can be individually customised and saved to suit the rider’s characteristics by accessing the set-up menu within each mode. The DTC action can be disabled in any Riding Mode and will not be reactivated upon the next Key-On.

The Ducati Riding Modes offer different factory settings designed to optimise vehicle behaviour according to riding styles and environmental conditions. The Monster 1200 R comes equipped with three Riding Modes (Sport, Touring and Urban) – each programmed to adjust the Ride-by-Wire (RbW) engine control system and the ABS and DTC intervention levels. If the Riding Modes can be changed while riding, the customised setting of ABS and DTC can only be changed when the bike is stationary with the throttle closed.

The Monster 1200 R dashboard also has a latest-generation TFT colour display. The display has three different layouts, named Core, Full and Track, each designed to display information suitable for different uses, now with a selected gear indication in each display screen. 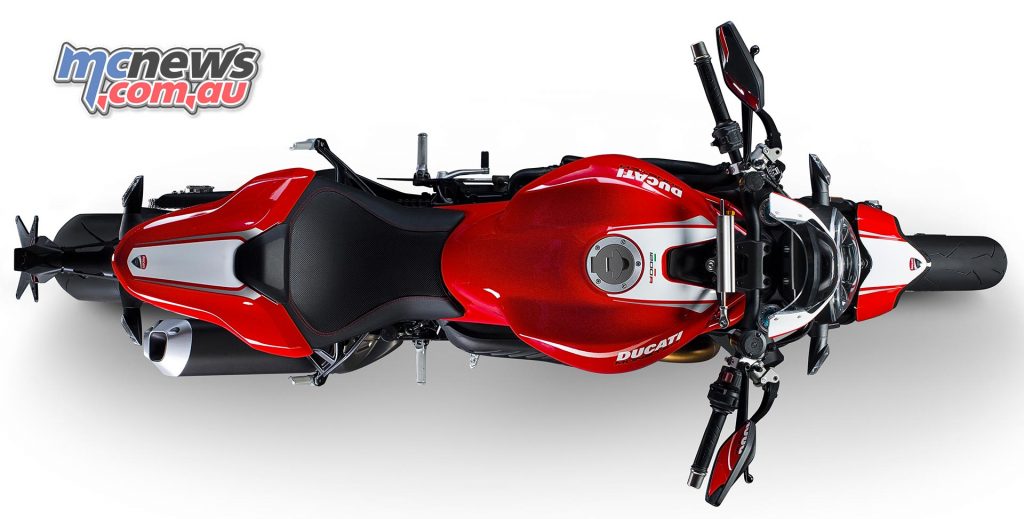 The Monster 1200 R TFT screen is customisable and the user can choose a preferred display, regardless of the selected Riding Mode.

The Monster 1200 R’s headlamp unit uses halogen main light illumination with LED position lights on either side and full LED lighting for the beautifully shaped rear and brake light illumination. LED technology is also used for the directional indicators which also sport a hazard light function, activated by holding the left-turn signal button for four seconds.

Where have all the old race bikes gone?

Gold Wing gets audio and seat upgrade for 2021