After posting the fastest lap time in both practice sessions, Blake Baggett was the top qualifier for the 450 Class at High Point. A year ago, Baggett took the overall win at this track in convincing fashion. He’s also coming off his best round of the 2018 season (3-3 finishes at Thunder Valley).

Baggett was a full second faster than Eli Tomac, who enters with a six-moto win streak to start the season. Ken Roczen, who changed suspension since going 2-2 at Thunder Valley, was fifth quickest behind Baggett, Tomac, Marvin Musquin and Justin Barcia.

A new addition to the 450 Class field this week is Justin Hill. Autotrader/Yoshimura Suzuki is moving him up to the big bike for at least a few rounds, starting with High Point, and he’s already shown some speed by qualifying in sixth.

An interesting subplot after the first three rounds has been privateer Dylan Merriam sitting inside the top 10 of the 450MX point standings. But coming off a ninth-place finish at Thunder Valley, he won’t get the chance to build on that momentum. Merriam rode the first practice session but skipped the second session, and according to a tweet, he will not race High Point due to food poisoning.

It was a bad start for a number of riders, as Ken Roczen, Blake Baggett, Phil Nicoletti and Weston Peick were all involved in a first-turn crash. Ahead of all that chaos, Eli Tomac—a rider not typically known for his starts—emerged with the lead ahead of Justin Bacia and Marvin Musquin after taking a rare holeshot. 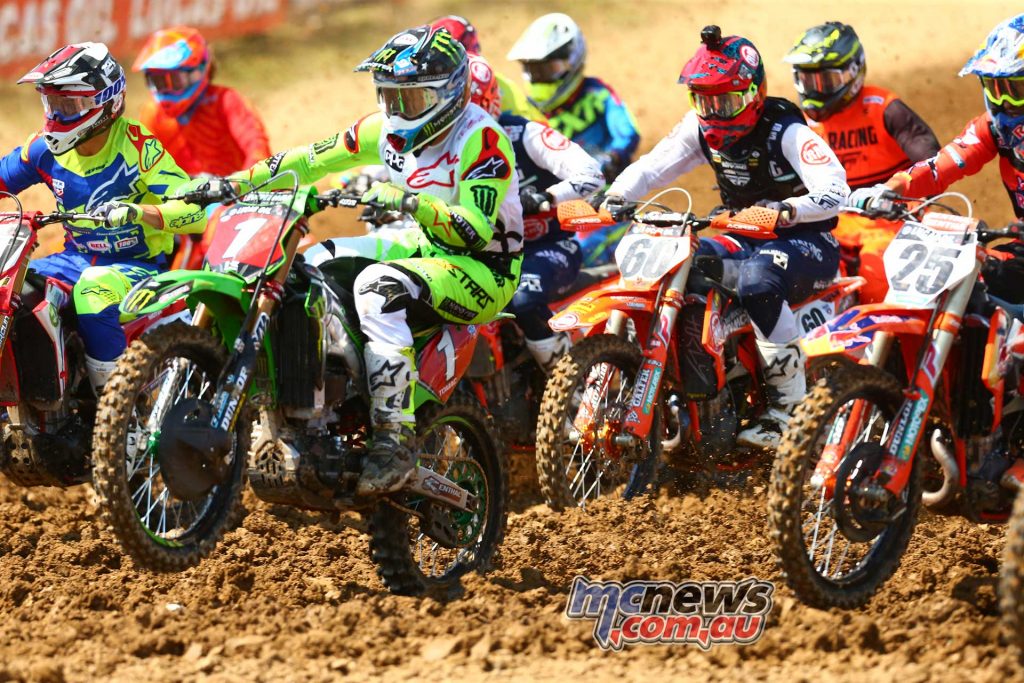 As things settled down, there were a lot of interesting names behind that lead trio, including Justin Hill, who was making his outdoor debut on a 450. Hill worked his way up to fourth place after passing Cody Cooper on Lap 2. Cooper had been one of several privateers able to take advantage of good starts to run in the top 10 early.

Tomac had clear sailing out front early, but Barcia and Musquin locked horns in a good battle for second place, with the position eventually going to Musquin. Over time, Musquin was able to chip away at the lead as Tomac encountered lapped traffic.

With about 11 minutes to go on the countdown clock, Tomac had seen his lead cut from 5 seconds to under 2 seconds. A few minutes later, there was only a half second separating the two, and Musquin was all over Tomac’s rear fender. As the clock approached 6:30, Musquin found an outside line around Tomac to take away the lead. 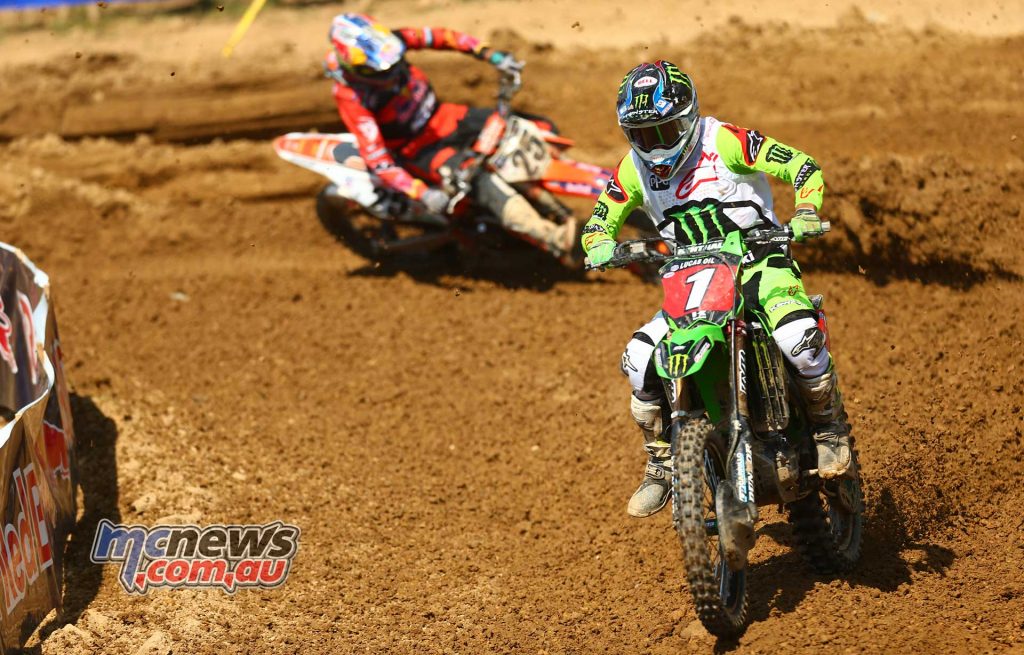 After losing the lead, Tomac didn’t back down right away. He closed back in on Musquin to get the gap down to about two seconds, but he couldn’t mount a charge and settled into second place. Musquin finished the race more than five seconds clear of Tomac and finally brought the Monster Energy Kawasaki rider’s win streak to an end.

Behind Musquin and Tomac, Barcia rounded out the podium in third, and Hill held on for a fourth-place finish in his 450 debut.

Baggett was able recover from his early crash to battle his way up to fifth. Benny Bloss and Roczen ended up sixth and seventh, respectively, and were the only other riders to finish on the lead lap. In eighth place, Cody Cooper was the top privateer in the moto.

Eli Tomac got another strong start but was behind both Ken Roczen and Marvin Musquin as the riders rounded the first turn. Tomac briefly put his bike out front during the opening lap, then Roczen quickly got back around him. Less than three minutes into the race, Roczen made a mistake that sent him off the track, which handed the lead back to Tomac. 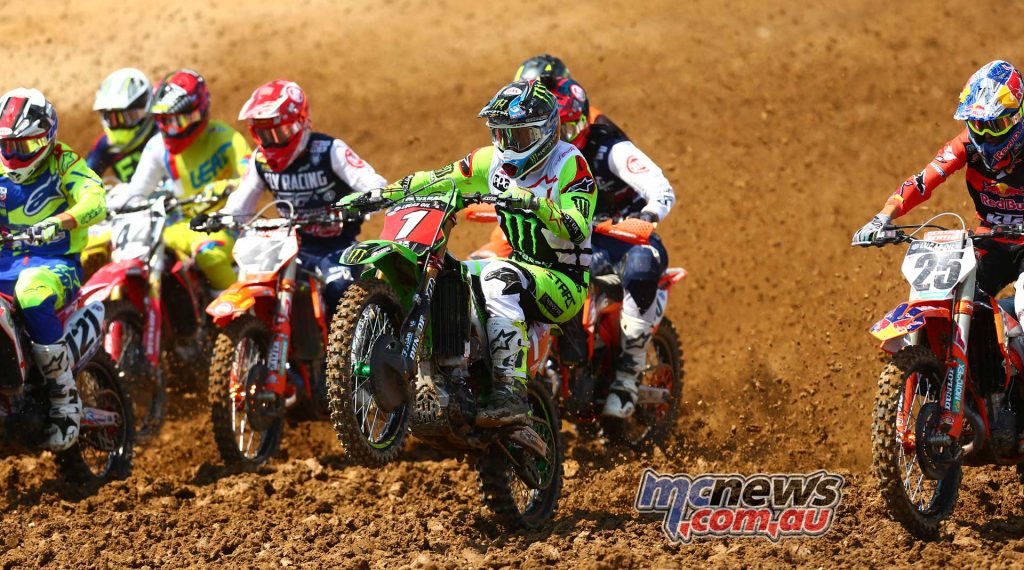 Tomac, Roczen and Musquin paced the field for about 10 minutes before Musquin made his away around Roczen for second place. While Musquin closed in on Tomac (just as he did in Moto 1), Roczen lost ground to both riders, making it a two-way battle for both the moto victory and the overall victory. 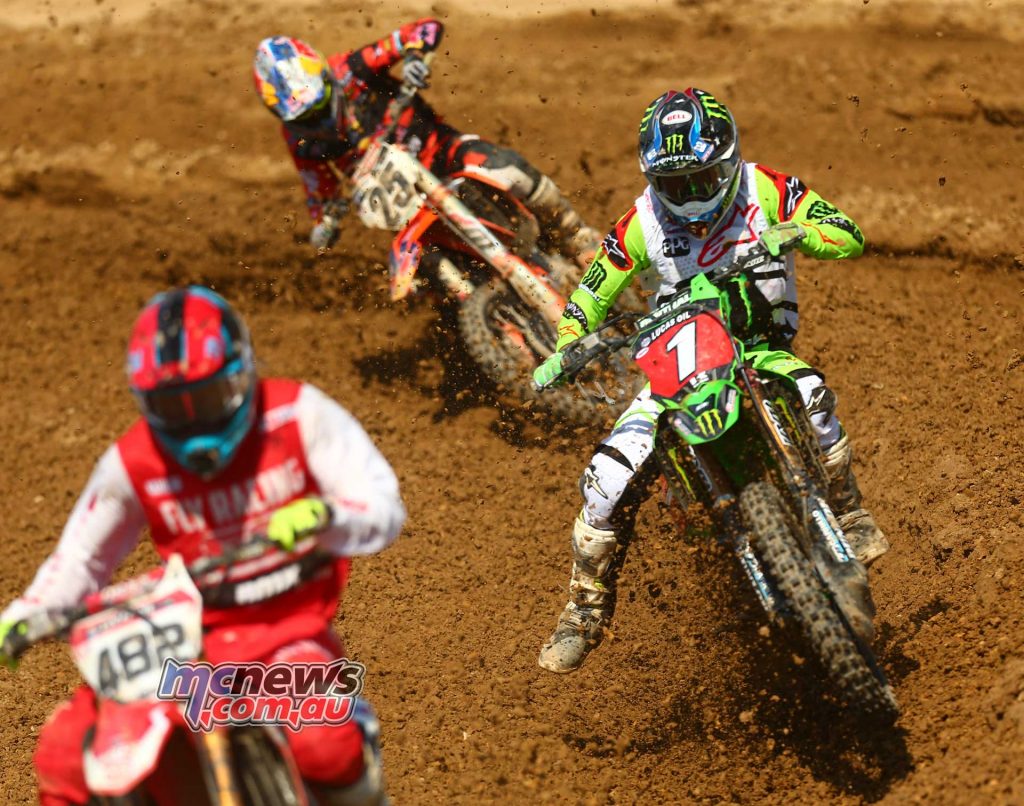 With seven minutes remaining on the countdown clock, the gap between Tomac and Musquin was little more than a second. After Musquin stalked Tomac for several laps, the two delivered an insanely dramatic finish. Considering how hot the temperature was at High Point, both riders had to be nearly exhausted by the time the countdown clock expired, but they continued to push on. Musquin and Tomac got side-by-side several times—including on the final lap of the race— but Tomac continually found ways to hold off the Frenchman’s pass attempts and take the checkered flag. 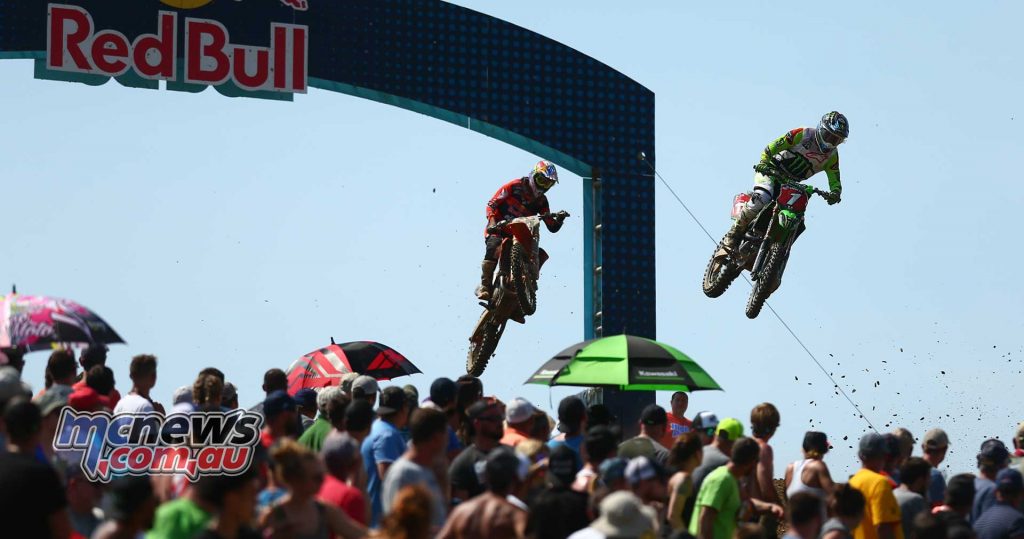 Tomac (2-1) and Musquin (1-2) ended up in tied atop the overall standings, but Tomac’s Moto 2 finish gave him the tiebreaker. That means that although his moto win streak came to an end, his overall win streak will continue on. The Monster Energy Kawasaki rider has now earned the overall victory at each of the first four rounds to start the season.

With 8-10 moto finishes, New Zealand’s Cody Cooper was the top privateer (ninth place overall) and moved himself into the top 10 of the 450MX point standings.

With Zach Osborne lost for the rest of the season due to a shoulder injury, Jeremy Martin has taken over as the title favorite in the 250 Class. Two weeks after winning at Thunder Valley and gaining possession of the red plate, J-Mart set the fastest lap time at High Point with a 1:58.370 in the second session. That was enough to beat out RJ Hampshire, who had set the best time in the first session with a 1:58.463.

Several notable riders are making their return to the series today after missing the first three rounds due to injury: Dylan Ferrandis (7th), Mitchell Harrison (18th) and Cameron McAdoo (19th).

A pair of Yamahas raced to the front of the field, with Justin Cooper beating Aaron Plessinger for the holeshot but quickly getting passed by his teammate. Jeremy Martin soon got past Enzo Lopes to move into third behind that duo, while another title contender—Alex Martin—had a crash on the opening lap that shuffled him toward the back of the field.

While Plessinger pulled away out front, the biggest battle on the track was between Cooper and Jeremy Martin. The rookie held off the two-time champion for the first half of the moto but eventually a mistake from Cooper allowed Martin to get inside and take away second place. The pass came with a little over 10 minutes (plus two laps) left in the race, but by that point, Plessinger had amassed a 10-second lead.

Plessinger went on to lead all 18 laps and win the race, with Jeremy Martin in second and Cooper in third. Austin Forkner and Jordon Smith rounded out the top five.

After his first lap crash, Alex Martin was able to salvage a few points with a 12th-place finish.

Of the riders making their return from injury, Dylan Ferrandis (8th place) had the best result in Moto 1. Mitchell Harrison took 14th, while Cameron McAdoo did not complete a lap.

Unfortunately one rider may have picked up a new injury. Garrett Marchbanks had been working on another top-10, but a hard crash with two laps to go left him grabbing his leg in pain and unable to finish the race.

Justin Cooper grabbed his second holeshot of the day, but once again, he was unable to hold the lead for a full lap. This time it was Jeremy Martin—his nemesis throughout Moto 1—that capitalized on a mistake to take the top spot away. Cooper soon dropped second place to Austin Forkner, then nearly came under pressure from Moto 1 winner Aaron Plessinger for third place.

Cooper wasn’t done battling with Forkner though. The two riders went back and forth several times until Plessinger and Alex Martin joined the battle around the midway point of the race. After some shuffling, Plessinger moved into second place, Forkner slotted into third, Cooper moved into fourth, and Alex Martin crashed and fell back to sixth.

A few minutes later, all those riders would pick up an extra position when race leader Jeremy Martin had a mechanical issue with his bike and found himself stranded on the track. As he pushed the bike into the pits, Plessinger assumed the lead while Forkner, Cooper, Dylan Ferrandis and Alex Martin took over positions No. 2-5.

Ferrandis spent the rest of the moto mounting on a charge—first passing Cooper for third, then challenging Forkner for second. The two nearly went by side-by-side across the finish line after an intense final lap, but Forkner ultimately survived to secure second place.

Neither one was able to catch Plessinger though. The Monster Energy/Yamalube/Star Racing Yamaha rider finished off a 1-1 sweep to grab his second overall win of the season and retake the points lead.

Because of Jeremy Martin’s DNF in Moto 2, Plessinger now holds a substantial 20-point lead over him in the championship standings. Alex Martin and Cooper are both within 35 points of Plessinger as well.

Forkner (4-2) and Cooper (3-4) secured spots on the overal podium in second and third, respectively, and Dylan Ferrandis (8-3) was fourth in his first race of the season.

Jeremy Martin wasn’t the only big name not to finish Moto 2. Joey Savatgy, Chase Sexton and Enzo Lopes all failed to score points in the moto after issues of their own.

Massive gallery of images from AMA SX Round 13 – Atlanta 1

Cairoli and Prado on top at Lombardia MXGP