Johann Zarco on pole for #FrenchGP

Rossi falls in P4 but unhurt and qualifies P9

Johann Zarco took a history-making pole at Le Mans, by becoming the first Frenchman to secure pole on home soil since 1988, when Christian Sarron did so at Ricard. He faced stiff competition from Marc Marquez, who looked to be closing in, but Marquez was relegated to second, while Danilo Petrucci completes the front row.

It was an incredibly tense Q2 session in Le Mans, with all eyes on the number five. The Frenchman, straight out the blocks, didn’t disappoint and topped the timesheets after his first flying lap. But Marquez – as ever – was quick to reply. The reigning World Champion wasn’t at the summit for long though, as Petrucci put in his fastest lap of the weekend go provisional P1. Zarco though had other ideas, and on the final lap of his first run, the Frenchman sent a warning sign, going 0.330 seconds quicker than anyone else.

When the riders came back out for their second runs, Jorge Lorenzo (Ducati Team) briefly led the session but Marquez then reset the benchmark, with Andrea Iannone (Team Suzuki Ecstar) also leaping up the timesheets and taking second. However, the home hero wasn’t done, again going quickest, this time by 0.130. As all looked set and done, Marquez’ efforts on his final lap sent French nerves into overdrive but Zarco held on.

Behind the explosive front row, Andrea Iannone starts from P4 on his Suzuki and was less than a tenth off the front row – another name sure to add fireworks to the fight at the front. The Italian heads the two factory Ducatis of Andrea Dovizioso, who’ll start fifth, and Lorenzo in sixth – both of whom look to have very strong race pace.

Jack Miller (Alma Pramac Racing) was impressive once again in P7 and in the mix throughout the session, making it four Ducatis in the top seven on a track the manufacturer has never won at. A team who have enjoyed winning at Le Mans recently are Movistar Yamaha MotoGP, however, but Maverick Viñales and Valentino Rossi will have work to do from P8 and P9 on the grid respectively – over half a second behind fellow Yamaha rider Zarco.

Dani Pedrosa (Repsol Honda Team), who came through Q1, will start from tenth on Sunday – but the ‘Little Samurai’ is a previous winner at the track, and came through from outside the top ten to take the podium last season. He was just ahead of Tito Rabat (Reale Avintia Racing), who was a slender 0.025 behind his compatriot, and Aprilia Racing Team Gresini’s Aleix Espargaro. The number 41 crashed at Turn 1 on his opening run but was ok and ran back to the pits.

Now, the grid is set for the French GP. Zarco led into the chicane here in 2017 after starting third, can he hold off the ever-fast Marquez and Petrucci when he launches from pole? Watch out, too, for the fast-starting Lorenzo on the second row, will he reproduce the lighting start he produced in Jerez? The top eleven are covered by eight tenths, and it looks set to be a classic.

“It feels great and it’s very emotional for me. I didn’t expect to have these emotions already during Qualifying here. For sure, I wanted to be fast, but when I saw the 31.185 on the dashboard I was surprised myself. The first run was already quite good, but I felt that the new tyre can deliver even more on the first lap, so I tried it for the second exit and it worked well. The job we did, working with different tyres, is amazing. A huge thank you to the crowd here, because they gave me a lot of positive energy. Let’s see, if this energy is enough to win tomorrow.”

“Qualifying went very well. I expected to be fast but ’31.2 was really fast. Of course, Johann had something extra today and that made him even faster! He deserves this pole. On our side we’re very, very happy because this track is one of the worst for us and, even though we’re still struggling a bit, we’re up there and that’s the important part. This morning we had a small tumble and in general, over the weekend, we’ve seen many crashes for several riders. The asphalt offers fantastic grip, which gives you great confidence, so you lean too much and push too much, but ultimately risk a crash. In the morning with cooler temperatures, but also in the afternoon on new tyres, it’s important to wait for the tyre to be ready before pushing hard. It’s something to take into account for tomorrow. Today we tried many different tyres, but we haven’t made our choice yet. It’ll be important to choose the best compound and then try to manage the race well. I think that the biggest challenge tomorrow will be Dovizioso. He’s not on the front row but tomorrow he’ll be there.”

“I’m very happy with this result. Despite yesterday’s fall, the feeling has always been very good. I wasn’t able to qualify directly for Q2 but in FP4s I had very positive feedback. I’m happy and I thank the team for this front row. Tomorrow will be a battle”.

“I am very satisfied especially for the race pace. The feeling is very positive and I think that tomorrow we can have a good race. To be honest I can say that the seventh position is good but I could have done better. Still, I am very confident for tomorrow’s race”.

Franceso Bagnaia (Sky Racing Team VR46) will start tomorrow’s HJC Helmets Grand Prix de France from pole for the first time in his Moto2 career, setting a new pole lap record along the way. Xavi Vierge (Dynavolt Intact GP), who crashed on his final run, will start second on the grid, 0.202 behind, with Jerez winner Lorenzo Baldassarri (Pons HP40) earning his fourth front row start of the year in P3.

Second place man Vierge was the early pace setter in the session, setting a new lap record after just five minutes. Bagnaia though was right on his tail, and sure enough, the Italian moved the goal posts to set 1:36.188 on the following lap – neither of the top two would go on to improve their times.

Joan Mir (EG 0,0 Estrella Galicia) secured P4 on his final run, the rookie interchanged positions with teammate Alex Marquez at the end of the session – the latter will start from sixth. Marcel Schroetter (Dynavolt Intact GP) continued his fantastic weekend and jumped up to fifth position towards the end, splitting the Marc VDS riders before crashing – rider ok.

Sam Lowes (Swiss Innovative Investors) was twice a faller in qualifying, but the Brit still managed to spearhead the third row, 0.108 behind Marquez. Brad Binder (Red Bull KTM Ajo) was a further 0.136 back from Lowes in eighth, with the South African finding some speed in qualifying after a more low key weekend. He’ll start just ahead of Simone Corsi (Tasca Racing Scuderia Moto2), who took ninth – his best qualifying result of the season.

Miguel Oliveira (Red Bull KTM Ajo) was P10, while Mattia Pasini (Italtrans Racing Team) suffered another crash early in the session and will start P11, with both men looking to move forward.

Frenchman Fabio Quartararo (MB Conveyors – Speed Up), despite an early crash, lines up 14th and is the top French hope on home soil. 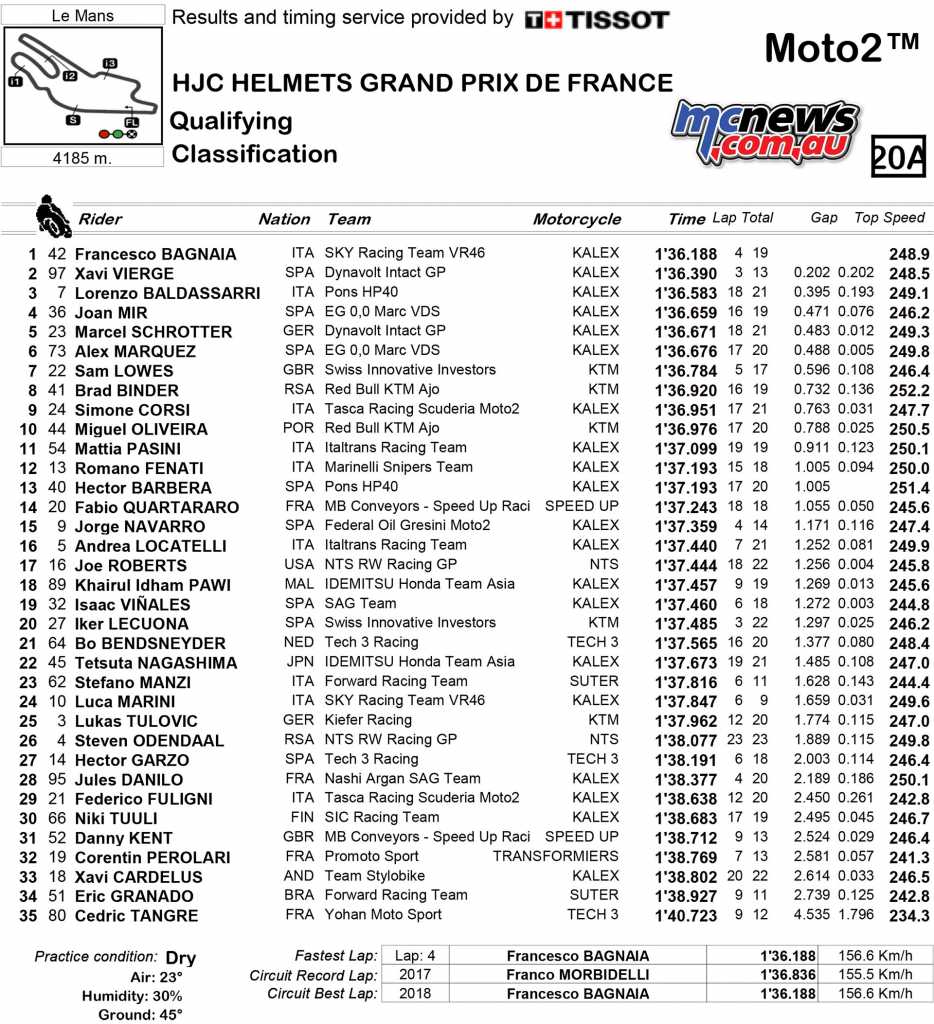 For the third time in 2018, Jorge Martin (Del Conca Gresini Moto3) will start the Moto3 race from pole position after putting in a magnificent final run to take top spot at the HJC Helmets Grand Prix de France. Jakub Kornfeil (Redox PrustelGP) continued his great weekend, leaping up the timesheets at the end of the session to start from P2 on his 150th Grand Prix start. After a heavy fall at the start of the session, Enea Bastianini (Leopard Racing) then put in a valiant effort to start from third in Sunday’s race and complete the front row – just 0.001 off Kornfeil.

Despite the perfect weather conditions, there were several early crashers in the session. Bastianini high-sided at Turn 6, with rookie Jaume Masia (Bester Capital Dubai) suffering the same fate at Turn 4. Gabriel Rodrigo (RBA BOE Skull Rider) high sided coming onto the home straight – the Argentine took no further part in the session, and was taken to the medical centre for a checkup.

The times weren’t threatening the circuit lap record until Fabio Di Giannantonio (Del Conca Gresini Moto3) struck with 12 minutes to go, which set the scene for a barnstorming final ten minutes. Marcos Ramirez (Bester Capital Dubai) briefly took over at the front, before Bastianini went quickest. However, when the riders came out for their final run, it was Martin who took control – and his 1:42.039 proved to be unbeatable.

Ramirez took P4 and heads the second row of the grid, with Albert Arenas (Angel Nieto Team Moto3), another crasher early on, coming back out strongly to take P5. Championship leader Marco Bezzecchi (Redox PrustelGP) – who crashed at Turn 7 mid way through the session – locks out that second row as he searches for his second win of the season.

Aron Canet (Estrella Galicia 0,0) was tenth quickest, however he’ll start tomorrow’s race from the back of the grid following a penalty, so everyone behind the Spaniard will move up a place. This means Lorenzo Dalla Porta (Leopard Racing) rounds out the top ten, with Jerez winner Philipp Oettl (Südmetall Schedl GP Racing) P11 and the recovering Darryn Binder (Red Bull KTM Ajo) an encouraging P12. 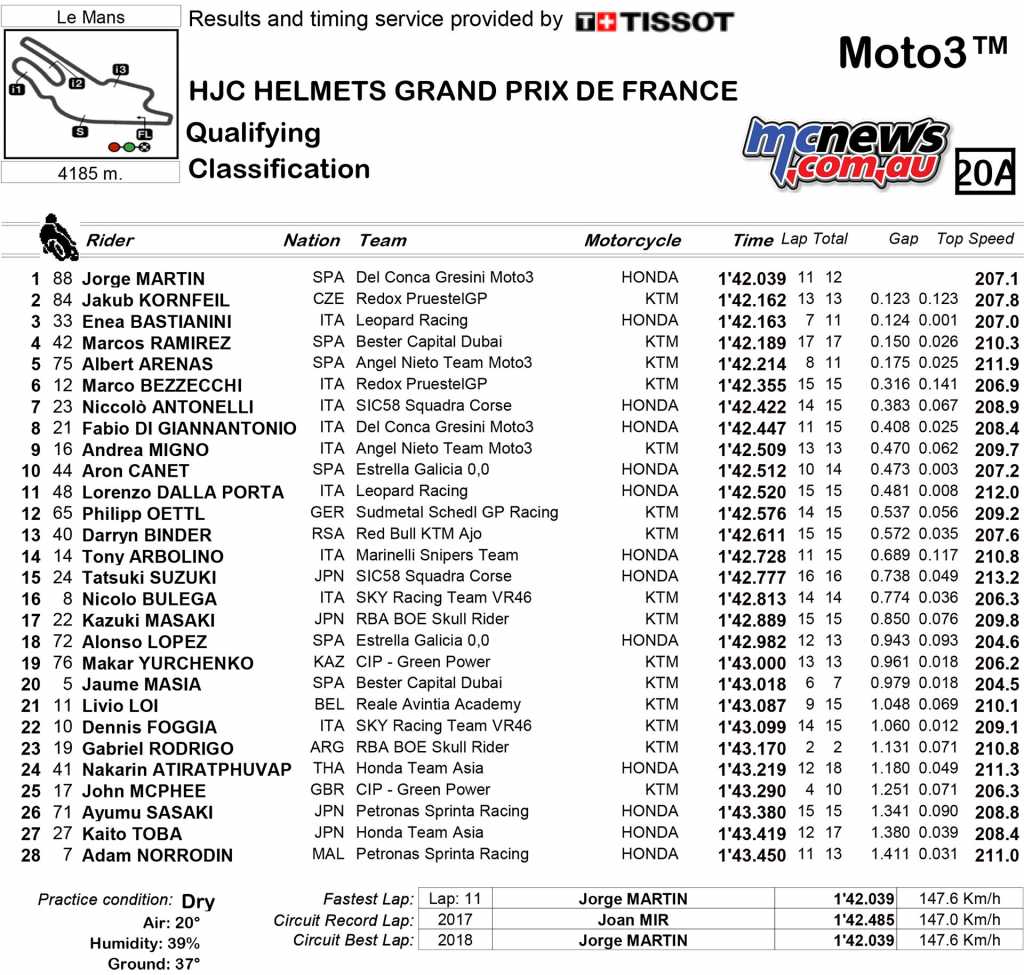