Hosted by Bacchus Marsh Motorcycle Club, the existing track has been demolished and re-built specifically for the second round of the Australian Supercross Championship.  The current start straight will be retained, however, the concrete start gates will not be in use. Instead, temporary start gates will be utilised.

The track is being built by the crew at ProTrax, who have a wealth of experience in the industry, being the sole track builders of the series in previous years.

The track building area is limited but should see riders run a similar lap time to other Australian Supercross events, in the vicinity of 40-50 second times. It’s set to feature two whoops sections, four small rhythm sections and one long rhythm section spanning the length of the field which will create many line options for riders to explore. This could help riders find their best chance to make passes given the tightness of the rest of the track.

The 450 class once again will be hotly contested with American import Justin Brayton looking to take another win on Australian soil. Brayton was a standout in last years series only losing to a legend of the sport, Chad Reed. His technical ability on the bike allows him to stay composed when coming through the pack, as well as negotiating his way past lapped riders.

Dean Ferris showed at the first round at Jimboomba that he was no one trick pony after claiming the Australian Motocross Championship, making up ground on Brayton in the closing stages of the race to finish an impressive second. In the three week break, Ferris ventured over to England to compete in the MXON for Australia, limiting his preparation time in between rounds.

Another hopeful is Dan Reardon, who after spending last summer riding in the USA with the Star Racing Yamaha team returned to Australia to ride aboard the Factory Mega Fuels Kawasaki bike. Reardon used the time off from the motocross series to get in extra preparation ahead of this year’s series.

The former champion looked solid all day at Jimboomba, and ran behind Brayton for most of the main event, only falling short to Dean Ferris. Although the podium result was a great achievement, Reardon will be striving to be on the top step of the podium.

American imports Daniel Herrlein and Nick Schmidt will be looking for redemption after disappointing results at Jimboomba. Herrlein went down in a first turn crash and started dead last, only managing to pick off a few positions in the stacked field, while Schmidt suffered from bike troubles all day before going down in the main event. Both riders have the pace to run in the top 5, but it will take a good start and clean laps to do so.

Hayden Mellross returned from the USA more determined than ever to claim his maiden lites championship. After missing out on the title due to bike issues in the closing stages on the last race of last year,  Mellross set to right the wrongs of his pass and ran away to an emphatic win in the opening round at Jimboomba three weeks ago.

He didn’t have it his own way, not getting the start he wanted but picked off riders with ease before making light work of former class champion Gavin Faith. The win was a dream start for Mellross and is expected to be the one to beat this weekend.

Former two-time champion Gavin Faith returned to Australian shores after clinching the AMA Arenacross Championship and spending his summer preparing at Club Mx in Florida. The American got off to the perfect start at Jimboomba but couldn’t withstand the pressure from Mellross.

Although he couldn’t match the pass of Mellross, he showed enough fight to hold onto the second position and keep his championship hopes in line. Faith will aim to get back onto the top step and find the form that led him to a championship in the past.

Last year’s champion Jackson Richardson pent the lead up into the series recovering from an injury sustained at the Shepparton round of the MX Nationals. Although he seemed to have fully recovered from his injury, Richardson hit the ground in the main event while running with near the front, relegating himself through the field, eventually finishing in sixth. He won’t be happy with that result and will be determined to redeem himself.

There are a few wildcards to watch out for at Bacchus Marsh. In the open class, watch out for Kade Mosig and Luke Clout. Mosig has proved in the past that he has the pace to run out front but was involved in a first corner crash at Jimboomba.

With a great start, he could give the top three a run for their money. Clout clawed his way up to fourth after having some issues off the gate. Like Mosig, a great start is vital and could open up his chances to step onto the podium.

A couple of riders that will be looking to improve at Bacchus Marsh are Geran Stapleton and Taylor Potter. Both have vast experience racing the AMA series and have been genuine contenders in series past in Australia. Stapleton had an injury-plagued run in the USA and Canada this year and will be wanting to step onto the podium by series end.

Potter returns to the series after a two-year hiatus from the sport. After receiving sponsorship from supplements company X-Drive, he been given the opportunity to take on the sport full time, and focus on winning races. Potter struggled through Jimboomba after hurting his back in practice but will head to Bacchus Marsh ready to contend for the win. 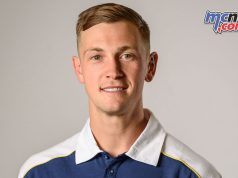