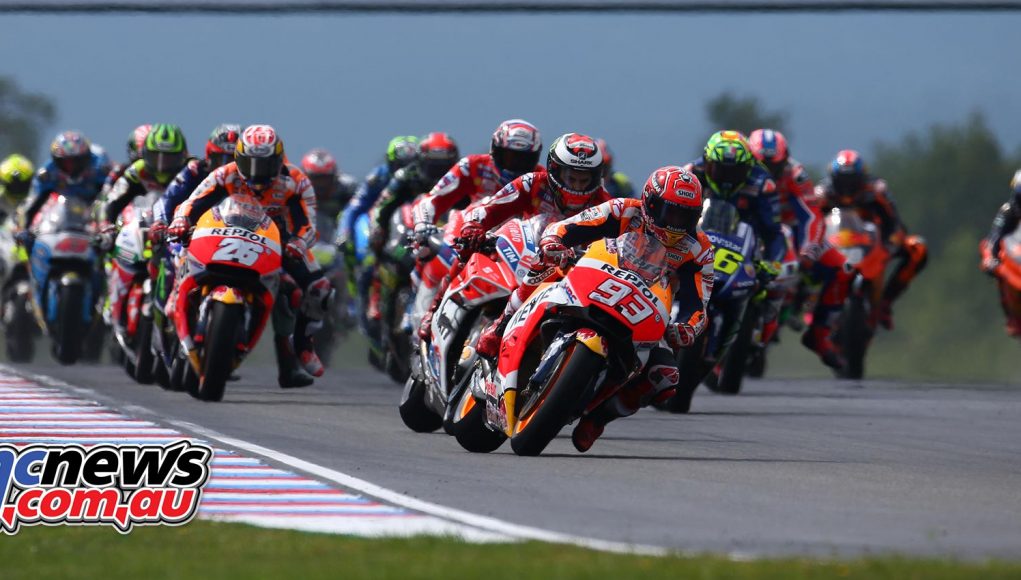 Czech it out! The Czech GP at Brno according to Boris

Everyone came back off the summer break snorting and hollering and ready to bang at Brno. The championship had never, in the history of the sport, been as tight as it was at this point in the game.

And while the racers (well, some of them) had taken their ease on Ibiza, two of the factories had sharpened their blades.

Ducati had focused on making wings for its fairings that weren’t wings, but looked like wings.

And Brno was helping out by offering up a variation of weather – sometimes damp, sometimes sunny, and rather unpredictable.

But Marquez was predictable – fast, consistent, and on pole. Again.

Rossi sat beside him, Dani Pedrosa had secured third, Dovi fourth, Crutchlow in fifth and a seemingly resurgent Lorenzo in sixth.

But the track was wet when the red light went off.

So the entire universe was surprised when Lorenzo surged into the lead. It was almost like he was back riding the Yamaha on a sunny day.

Marquez, the only rider on the grid to have chosen to start on soft wets, was quickly on Jorge’s rear tyre, followed by Dovi and Rossi.

But Marquez’s choice of rubber was either the smartest move all year, a massive miscalculation, or the lucky break to beat them all. Because as the laps started to unfold, Marquez quickly found himself going backward, his soft rain tyre being devoured by the drying track.

Lorenzo led for three laps, but as Marquez pitted to get some slicks, Rossi sailed into the lead, and the race, a flag to flag affair, came down to who pitted when.

Marquez came back onto the track and was almost instantly ten seconds a lap faster than everyone else. The track was dry on the racing line, and over the next three laps everyone else pitted to get their slicks.

But it was all over. By lap six, Marquez was 11 seconds ahead of “I’m-not-pitting-until-my-tyres-fall-off” Zarco in second. By lap seven he was almost 20 seconds in front of Pedrosa, who was now in second as the field reshuffled itself after the bike swap.

It was an unassailable lead, as it turned out, and the reigning world champion won by more than 16 seconds.

The rest of the field was in a state of either chaos or controlled salvage.

Lorenzo pitted, only to discover his second bike was not ready. It had been originally fitted with harder wets, and the 15 or so seconds it took the Ducati team to get slicks onto it would have sent Jorge into a spin and given him an entirely new list of excuses to hide behind. Even though his anger was certainly justified in this case. Calling your rider into the pit, only to not have his bike ready is something that happens on club-racing days at Wakefield. One would expect a little more professionalism in MotoGP. Still, maybe it’s Ducati’s way of strengthening Lorenzo’s character for the rest of the season. Yeah, that must be it.

Dani was a distant second behind Marquez, but he was also a fair way in front of the rest of the field, and he said later his only regret was he didn’t pit a lap earlier.

Rossi rode a solid race, scything through the field after also having pitted some two laps or so too late, and salvaged very important points in fourth.

Ahead of him was his team-mate, Maverick Vinales, who looked pretty crap in qualifying and practice, but rode brilliantly in the race and through the field for the vital third-place points.

Asparagus A was penalised three places for causing Iannone to faceplant in the pits. Which must have irked Aleix some because he was running in third at one stage. Still, seeing The Maniac eat bits of pit-lane must have been worth a giggle. The fault, as seen by race direction, lay with Aleix’s team, who waved him out just as Iannone was turning into his pit to swap bikes. Andrea must have thought he was going to centrepunch the Aprilia rider, and chose to crash instead. Stout fellow. Hell, it’s not like anyone at Suzuki is talking to him anyway.

Scott Redding, whom the Pommy announcers keep pressuring by saying he is “riding for his job” at Pramac, found himself at the pointy end of the field in the middle of the race, but faded back to race with Lorenzo for 15th place. Jorge beat him eventually, and scored a point for his efforts.

Cal Crutchlow acquitted himself very well, and right up until the last lap, looked like he might snag fourth. But Rossi was not to be denied those crucial points.

Behind them, it was all Ducati, as Dovi and Petrucci duked it out (pardon the pun), for sixth and seventh respectively.

After the race, there was only one question everyone wanted to ask Marquez.

Did he plan this, or was it gambler’s luck?

As it turned out, it was maybe a bit of both. He went out on hard wets for the warm-up lap, said didn’t like what he was feeling and asked his team to swap them for soft wets as he sat on the grid. He knew full well that the soft wets would only last one or two laps on a drying track and only a little bit longer on a mildly wet track. They’d be great if it was sheeting down.

But as the sun poked through the clouds a few laps from the end, I’m pretty sure it couldn’t have been any brighter than the smile on Marquez’s face as he rode past the chequered flag.

After the Brno race weekend the majority of the teams stayed on for a one-day test, where the old master himself, Valentino Rossi, topped the charts. Click Here for full test report with times, images and quotes.

Next up is Austria. Then late this month it is across the channel to England, dnd no-one likes racing in England – even the English. Still, at least the announcers will leave Redding alone now that Miller has signed up to Pramac and taken his place next year.