Boris recaps the Qatar MotoGP as only he can…

The first round of MotoGP is always a bit weird. It’s the only round that takes place at night because Qatar is a baking paella pan full of sand with some skyscrapers breaking the horizon. So racing during the day is fraught with heat-stroke, burning wind and bastard sand on the track. 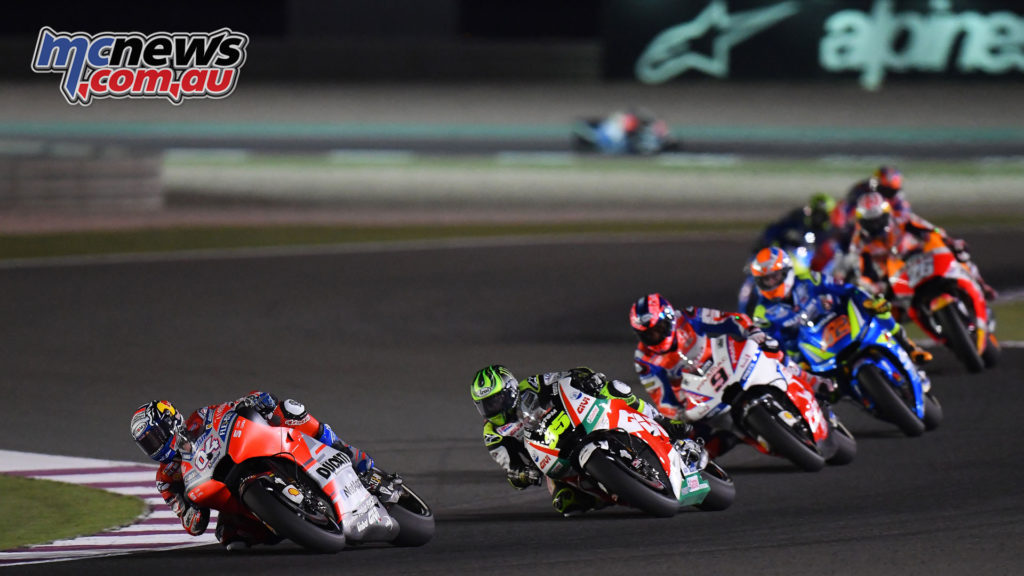 The race might as well be held on Tatooine.

It also takes place at bullshit o’clock in our timezone, and the only people watching it are sand-eyed MotoGP fanatics like me, meth freaks and werewolves. But because it is the first race of what promises to be an astonishing season, it’s just impossible NOT to watch it as far as I’m concerned.

So much hinges on this first race.

Hell, I even managed to see the practice sessions and qualifying, and this is what I observed in the lead-up to Round One… 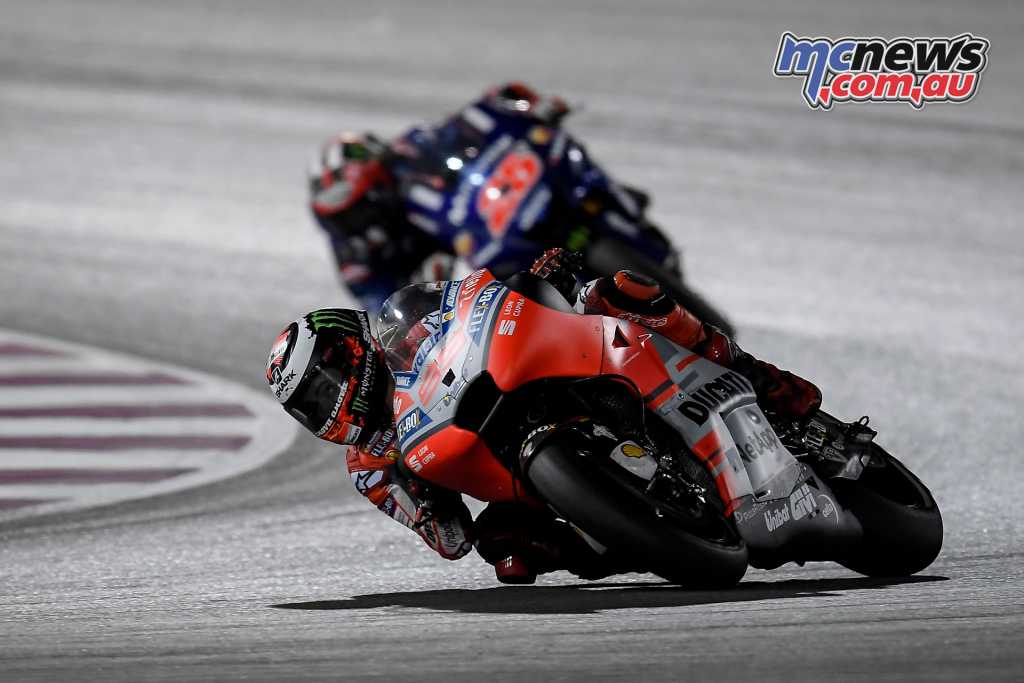 Lorenzo, the most successful rider at Losail, was certainly not dazzling anyone. He had dispensed with all the winglets on his Ducati. Last year he had declared them to be indispensable to his efforts. Then there was the off-season, then Carlo Pernat said he was having problems getting his head in the right space but still rated him, then the fairings came off. Then during practice, there were sparks flying from underneath the back of his bike and he was called back into the pits.

The omens, if he believed in omens (and what racer doesn’t?) were not good. What subsequently happened during the race certainly did nothing to help Lorenzo find that crucial head-space. His post-race interview was most revealing…

If you don’t think racing MotoGP is as much mental as it is physical, you don’t know much about motorcycle racing. And while Lorenzo stays mentally where he is, not much will probably change for him.

I saw that Asparagus P was riding his KTM with a significant back injury. He’d hurt himself back in January testing and had to be helped onto his bike at the more recent Qatar test. I noticed Scott Redding was now racing with his fifth team in four years. His leathers collection must be hugely impressive. 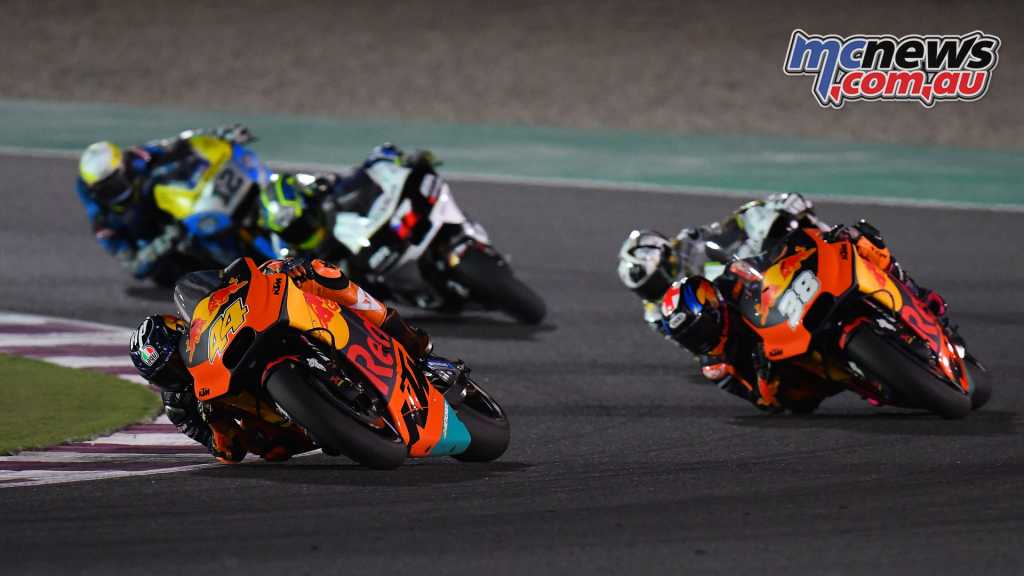 I saw Karel Abraham pushing his Angel Nieto Ducati around the track, which is no way to start a new season even if your dad owns the Czech republic. And then during Q2 I watched Zarco, Petrucci and Marquez smash the lap record set by Lorenzo 10 years ago. No wonder Jorge was wearing sunglasses the following night as he sat in his garage just before the race.

There must have been scant comfort for him on grid, either. He was propped in 9th, ahead of Miller and behind Rossi. 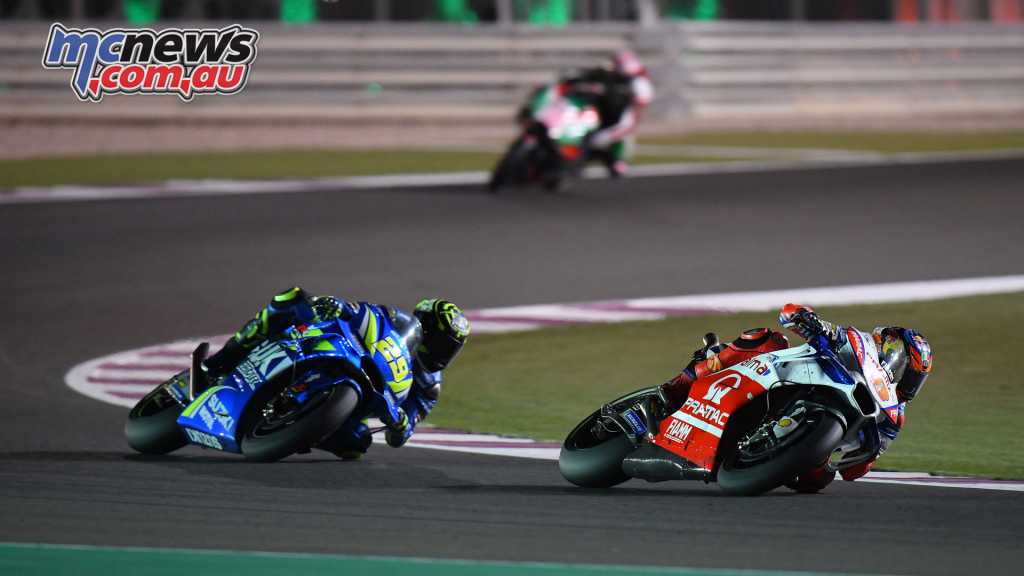 Up front, Zarco was the point of the spear – and all the pundits were already declaring 2018 to be his year. Much like they saw 2017 as the Year of the Maverick.

Marquez was beside Zarco on a track the Hondas don’t traditionally like, then came Petrucci, Crutchlow, Dovi, Rins and Pedrosa.

Looking at the peppering of newer talent at the pointy end, you could be forgiven for thinking maybe it was time for the Old Guard to make way for the Young Lions. Or maybe not.

The flicking off of the red light would soon determine that. 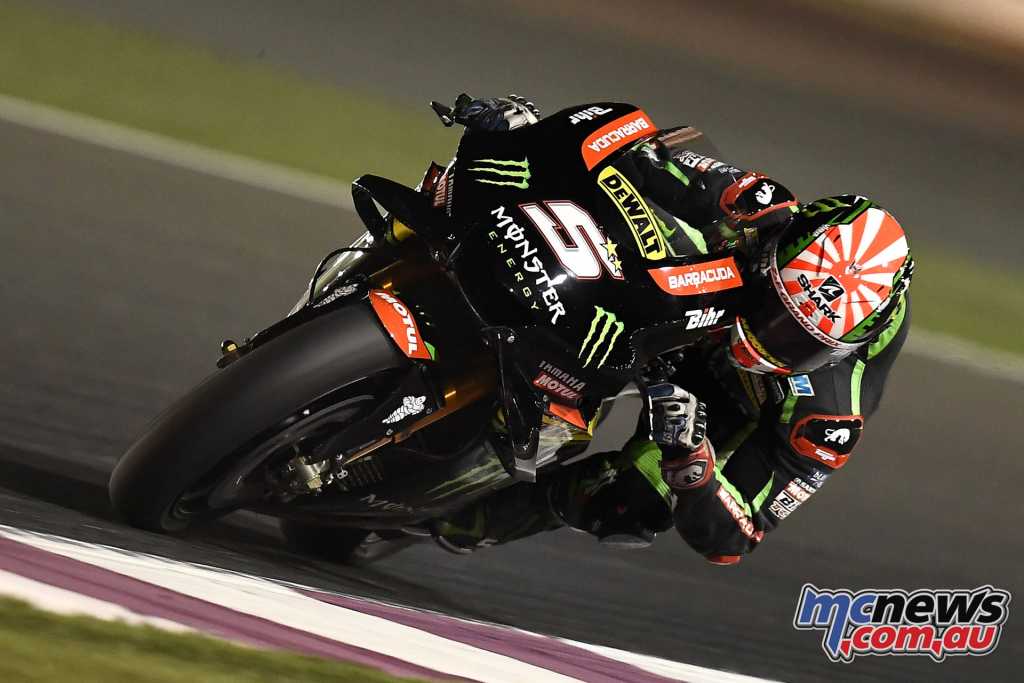 Zarco, in a carbon copy of last year’s start, got the hole shot, ran wide, and was soon overtaken and bracketed by Marquez and Pedrosa, who got a great start. Rossi also got off the line well, and was tucked in fourth ahead of Petrucci, Crutchlow, Dovi and Iannone, with Rins just behind them.

But as they started the second lap, Zarco slipstreaming behind Marquez down the main straight took back the lead, as Rossi elbowed Pedrosa out of the way and moved into third.

Zarco then proceeded to lead for the next 17 laps – a monumental, measured and totally professional effort which ended up cooking his tyres because the effort required to stay ahead of the Old Guard meant the race pace was staggeringly quick.

Behind him the race unfolded with the intricacy of a chess game. 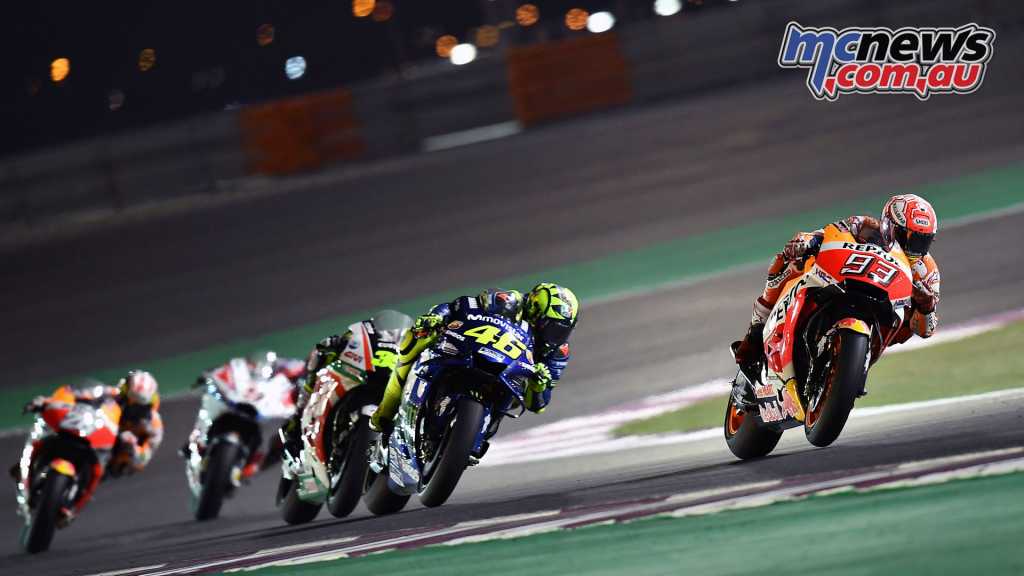 Rossi clearly meant business and by lap six had passed Marquez after showing him his front wheel a few times, and started to threaten Zarco by also showing him his front wheel. But then they all meant business. No-one was gapping anyone. Virtually the whole field was in a line behind Zarco, with the first six all within a second of each other, and the top 10 all within two-seconds.

Petrucci passed Pedrosa at the end of Lap Four, while Vinales languished back in 14th, three places behind Lorenzo in 11th. Dovi was solidly in seventh, but as I said, no-one was making much of a gap anywhere.

Zarco may have been leading but John Lennon was not chasing him. You just knew neither Rossi or Marquez would let it be. 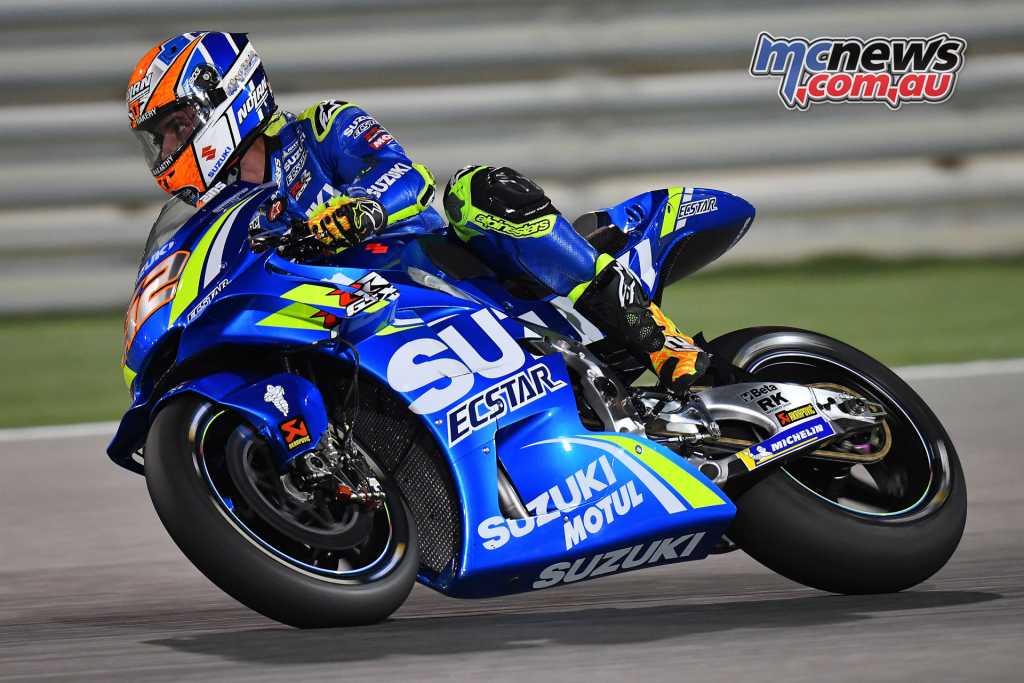 Suzuki had clearly done a lot of work in the off-season, and Alex Rins was eagerly monstering seventh-place Dani Pedrosa with his blue motorcycle.

By Lap Nine, things had reshuffled themselves a bit. Big gaps had still failed to materialise, but Zarco was still leading. Behind him Rossi and Marquez had been joined by Dovizioso. Behind him, Crutchlow was earning his money by beating on Petrucci, who in turn was being chased by Rins. Rins had put paid to Pedrosa and was now looking at greater things.

It became Show and Tell. Everyone was showing everyone else their front wheel. Usually at the end of the main straight, which is one of the fave passing points at Losail. 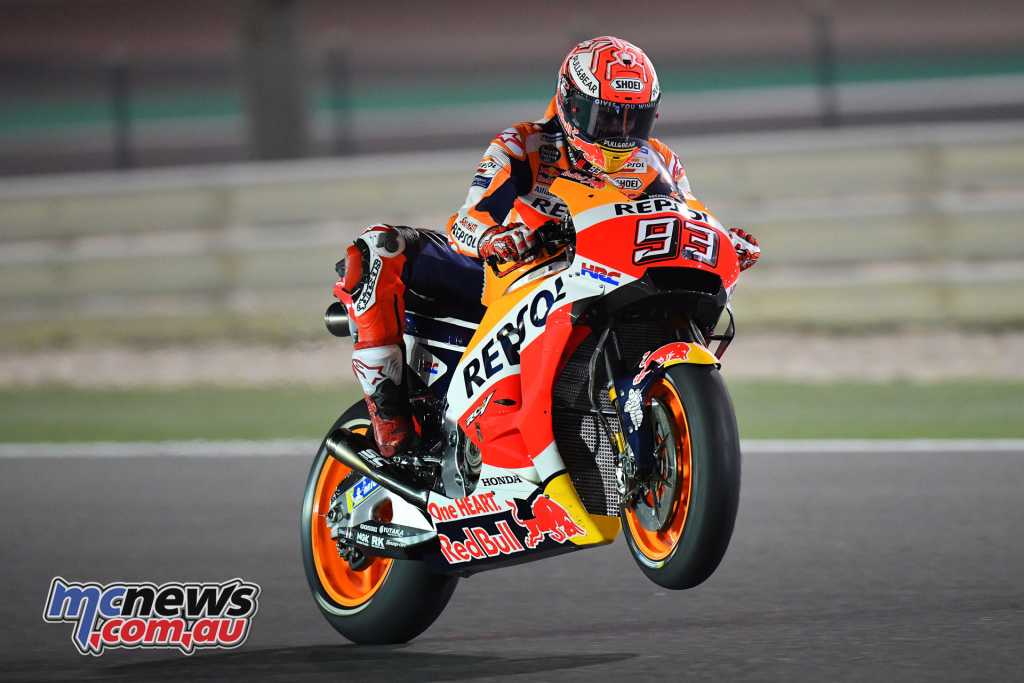 Watching it unflod, you just knew Zarco was involved in a serious cage fight. Dovi was upping the pace, which was already a blistering 1:55.6 by Zarco, and was being matched by the front runners.

Behind them, the KTMs were being all kinds of crap this first round, with Smith back in 18th and Asparagus A in 11th.

Lorenzo in tenth was looking at Iannone’s rear wheel and wondering if the KTM behind him was about to fly past and if his brakes would start working. 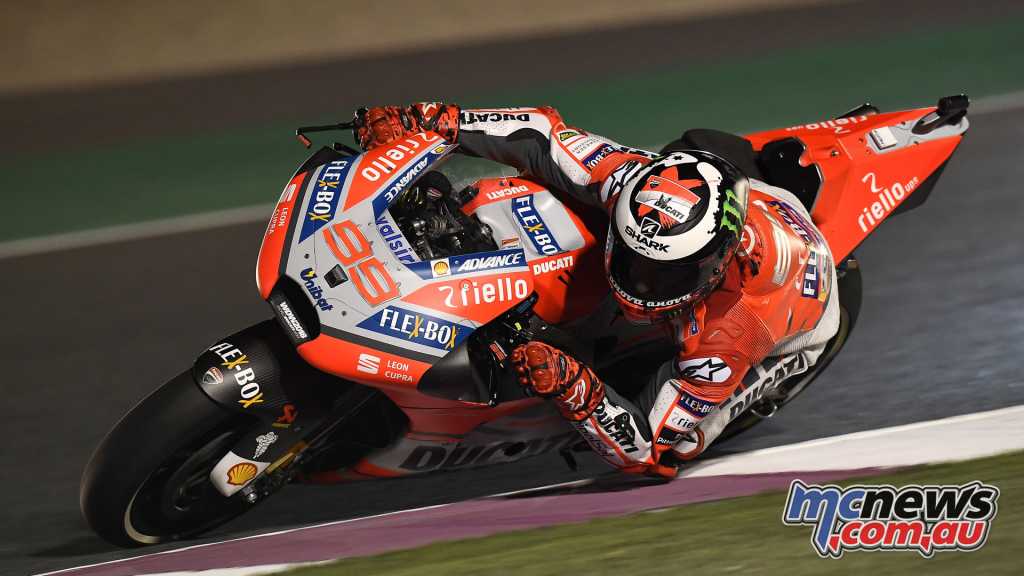 Ten laps from the end of the race, the Black Mamba crashed out. He said later he just dismounted at Turn Five rather than spear into the air-fence when his brakes finally gave up completely.

Up the front it was just as close as ever, but Rossi had relegated himself to fourth after running wide, and Dovi used the Ducati’s staggering grunt down the straight to lever himself into second place.

Six laps from the end, shit got real.

Zarco went backwards at the end of the main straight and found himself in third. Marquez somehow did not die in that pass, but outbraked himself and still stayed ahead of Zarco as Dovi sailed into the lead. Rossi quickly ate Zarco, and the new top three were the Old Guard of Dovi, Marquez and Rossi. 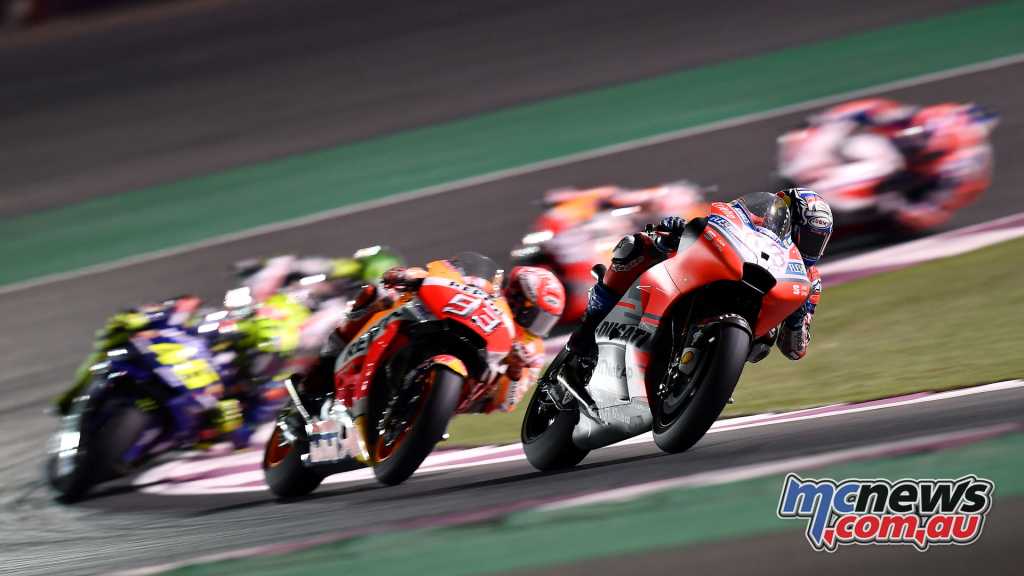 Zarco ended up finishing in eighth place, his tyres sending him ever further backwards. Between him and the front three, Vinales suddenly looked like the Vinales of legend and charged like bull through the pack in the closing stages of the race to finish in sixth, just shy of Petrucci.

Ahead of them and now a little adrift of the three podium contenders was Cal Crutchlow, who rode a solid Old Guard race and was, once again, the top not-factory rider.

But on the last lap the podium was still undecided. Dovi, Marquez and Rossi had finally eked out a gap of about two seconds – their pace had not slowed at all from the mid 1:55s. Certainly Rossi was going to be third unless a camel ran in from the desert and took him out. He was not going to catch Marquez and Dovizioso. 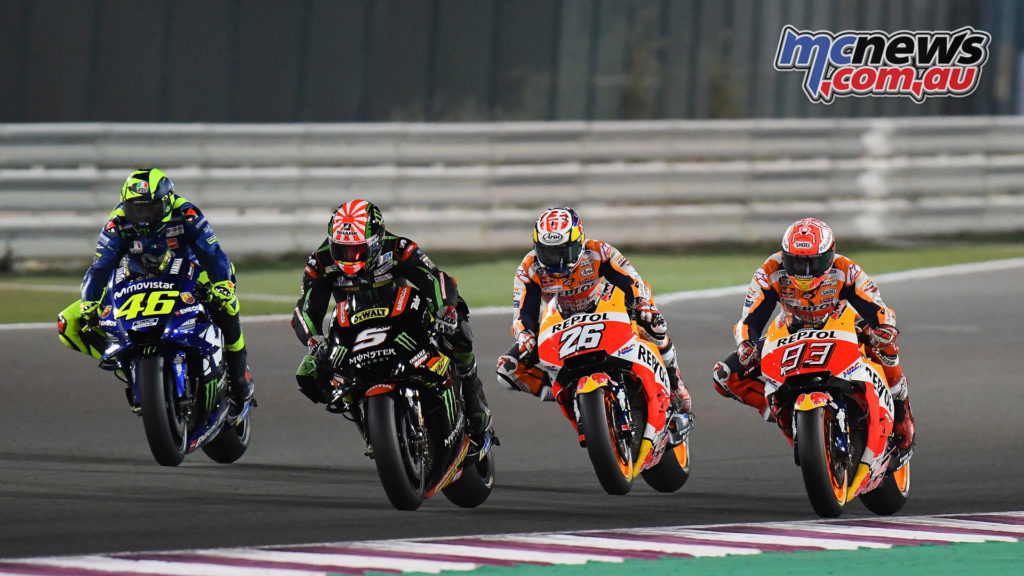 But once again, it was searingly, edge-of-seat obvious Marquez was not going to content himself with second. He was going to have a crack at Dovi, and if that crack was again going to be on the last corner of the last lap, then so be it.

Marquez is amazing. But no longer unbeatable.

And Rossi is far from done.

The Devil in Dovi | Boris on the Austrian Grand Prix