The Return of the King at Sachsenring

Almost no-one likes racing at Sachsenring. It’s short and tight, like a money-lending dwarf. You run wide on Turn One or crash in Turn 11 and the Germans make a lot of German noise, and that always makes other Europeans nervous.

But Marc Marquez likes racing at Sachsenring. He has now won there eight times in a row from eight pole positions. They call him the King of Sachsenring – probably because it rhymes, but obviously because it’s true. The defending world champion does rule the newly-surfaced track. And it does serve up some exciting races, just as it did this year.

Rossi’s bike ceased to proceed twice during practice, and The Doctor found himself starting from ninth on the grid, which was one position up on championship leader, Dovizioso. Ahead of him sat the two Asparagus brothers. On Pol’s shoulders sat the hopes of the KTM factory, which had found itself in seventh, its highest grid-position thus far. In front of them was Lorenzo, who must have cricked his neck staring at the sky, from whence the promised rain never came. Folger and Crutchlow finished off the second row, behind Pedrosa, Petrucci and Marquez. 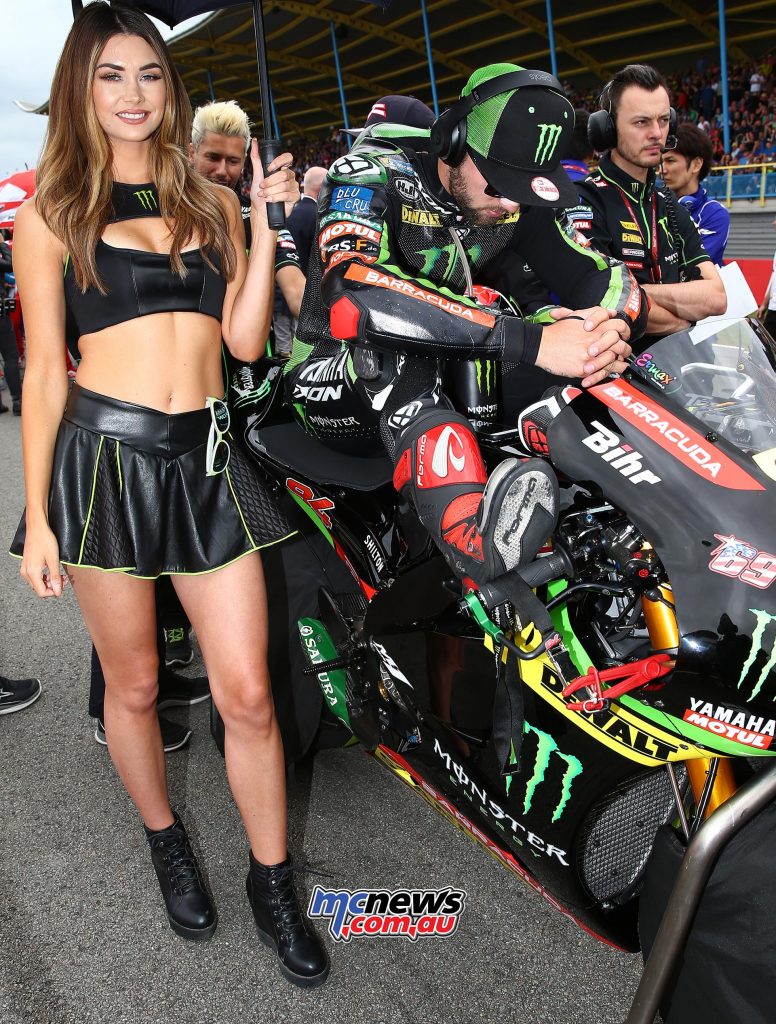 The two factory Hondas rocketed off the start, with Lorenzo hot on their heels in third. Jorge had chosen to race on the soft tyres clearly seeking all the grip from the get-go. And he paid for that three laps later when Folger passed him.

As the Hondas started to gap the field, Folger set off after them while Lorenzo found himself in the clutches of Petrucci and Rossi, who was being menaced by Crutchlow for sixth. Zarco was languishing back in 17th, having been unable to find anything worth finding on the weekend. 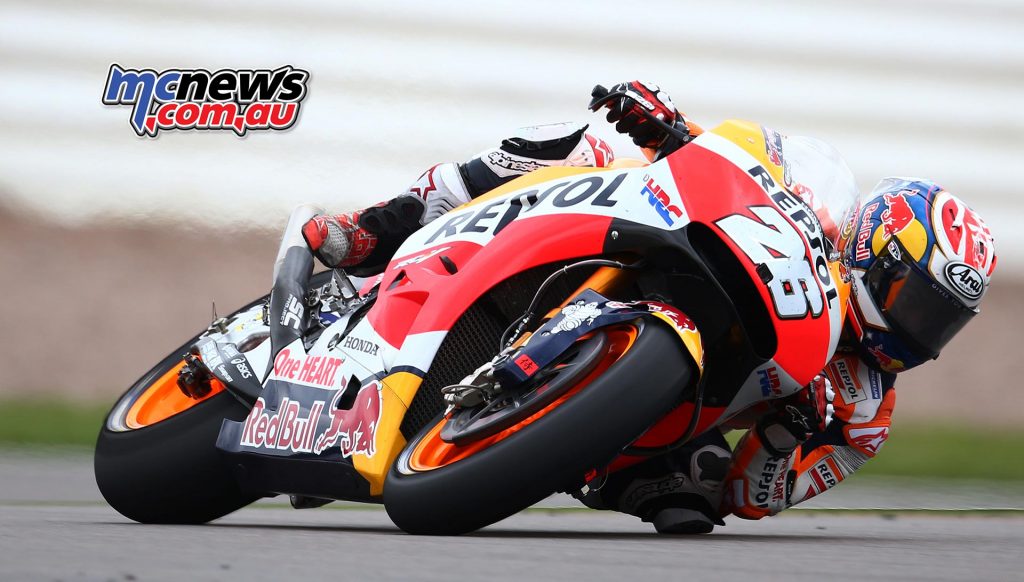 Behind them, it looked like Lorenzo was holding up the field, so Petrucci and Rossi sailed past, as Dovizioso also passed his team-mate, and had a go at The Doctor. I think that lasted maybe two corners before Rossi slapped him back.

Vinales, who had struggled into 11th on the grid after discovering Marquez was not his mate in qualifying, began to mix it up with Crutchlow. 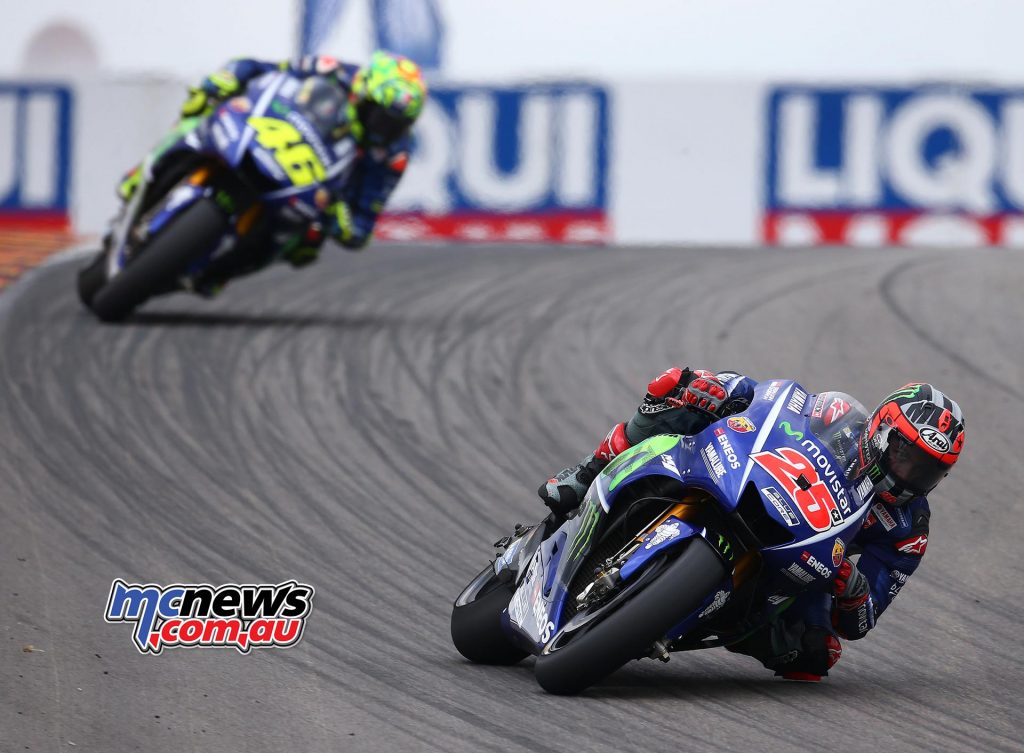 Now Petrucci started to go backwards, and with 21 laps to run, Rossi hauled himself into fourth, with the leading trio of Folger, Marquez and Pedrosa a long three seconds in front of him.

On the next lap, Marquez felt Folger needed to understand who was the current world champion, and pressured the young German until he ran wide on Turn One and gave up the lead. 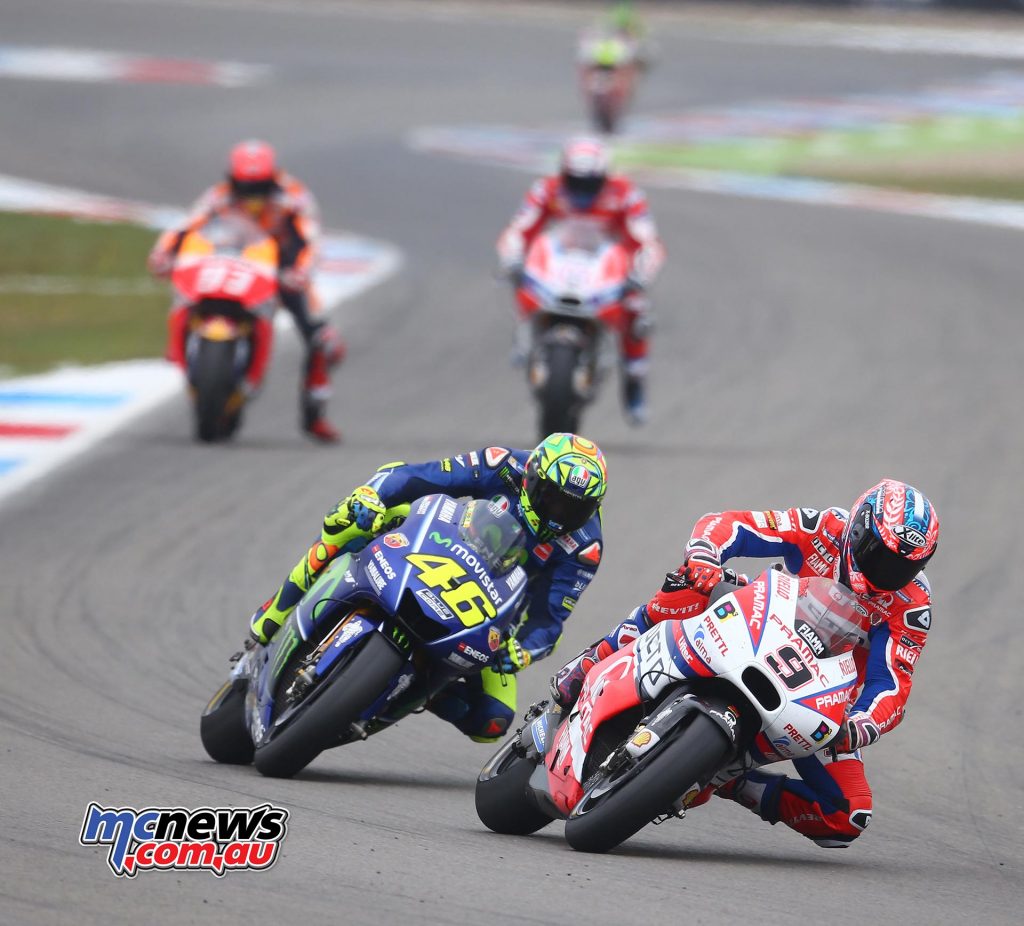 Barbera returned to the pits after being black-flagged for jumping the start, but all eyes were on a flying Vinales, who had now relegated Lorenzo and his self-destructing tyres to ninth.

Asparagus A found himself in sixth behind Dovi and Rossi, and he only gave that spot up to Bautista much later in the race, finishing seventh, so Aprilia were certainly pleased not to be rebuilding his MotoGP bike after this round.

Bautista, on his charge to an eventual sixth place also passed Lorenzo, who was now in 10th and probably hoping Turn 11 would start claiming the riders in front of him. 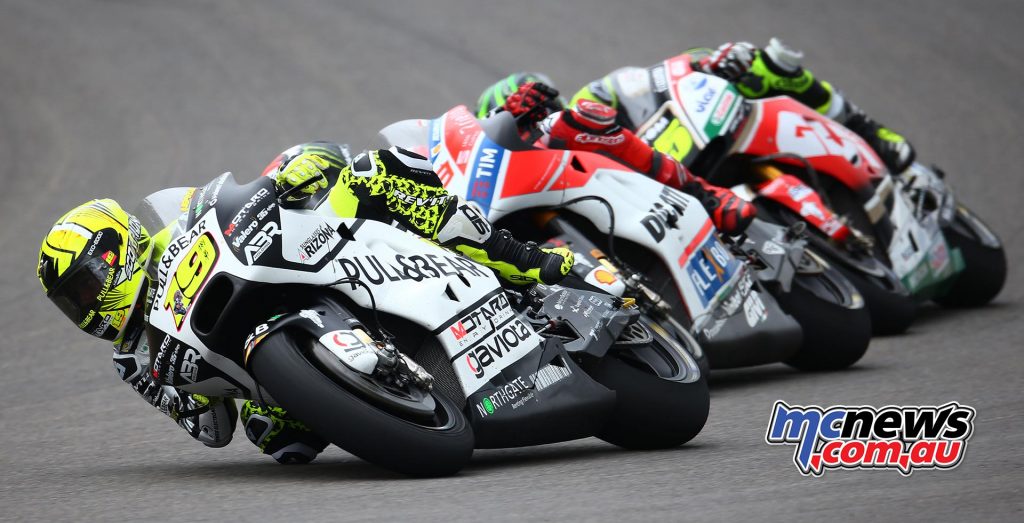 Folger continued to shadow Marquez and the Germans began to think one of theirs would actually win a MotoGP. Pedrosa was no longer a threat, and had dropped 3.6 seconds behind the leaders, with Rossi holding station fourth, 3.5 seconds behind him.

Petrucci, on the other hand, was not holding anything. Asparagus A diced with him for a while, passing and being passed in turn, before applying himself and making it stick. Vinales also caught and passed Danilo, who was doubtlessly contemplating just how fickle this MotoGP business is. One week you’re challenging Rossi for the win, the next week a bloke on an Aprilia is feeding you stale ham. 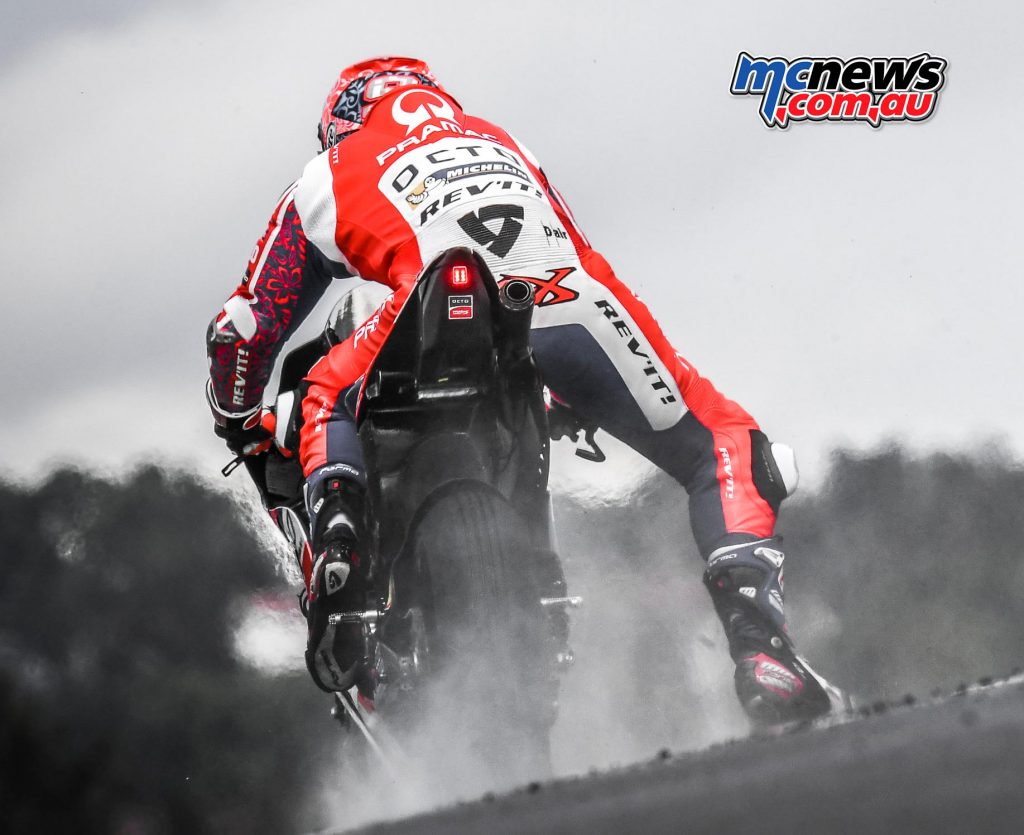 At the halfway point, Marquez was heading Folger, Pedrosa was riding by himself in third, while the clot containing Rossi, Dovi, Vinales (now the fastest man on the track), Aleix Espargaro, Bautista and a slowing Petrucci, battled it out for fourth.

Lorenzo was now back in 11th and possibly seeing Petrucci just ahead of him, while Zarco tailed him disconsolately, wondering if he’ll ever get to do another victorious back-flip. In due course, Vinales passed Rossi and with 11 laps to go, it looked like Marquez had the measure of Folger, who wasn’t backing off, but wasn’t really catching the world champion either.

Dovi also started to struggle at this point in the race. Bautista passed him, while back in the pack, Lorenzo looked like becoming Iannone’s plaything again. But Andrea did the right thing and crashed instead after going way too hot into Turn 12. 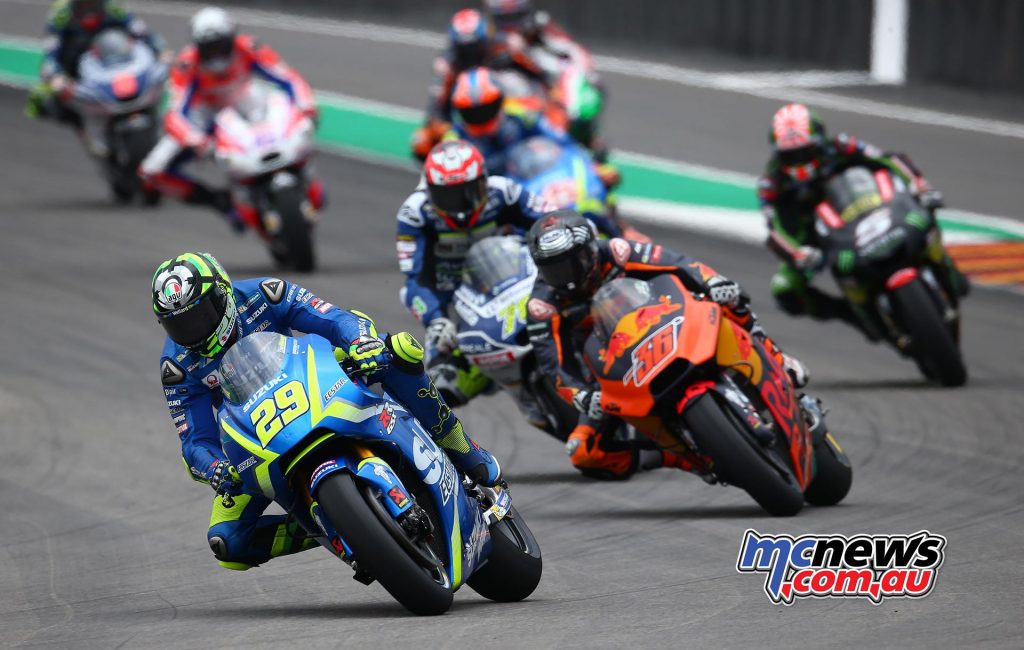 Four laps from the end, Dovi was finally passed for keeps by Aleix Espargaro, and Folger’s big German heart was broken by Turn One. He ran wide on that turn twice in the last three laps, and Marquez, who did not put a tyre wrong the whole race, sailed off into the distance. 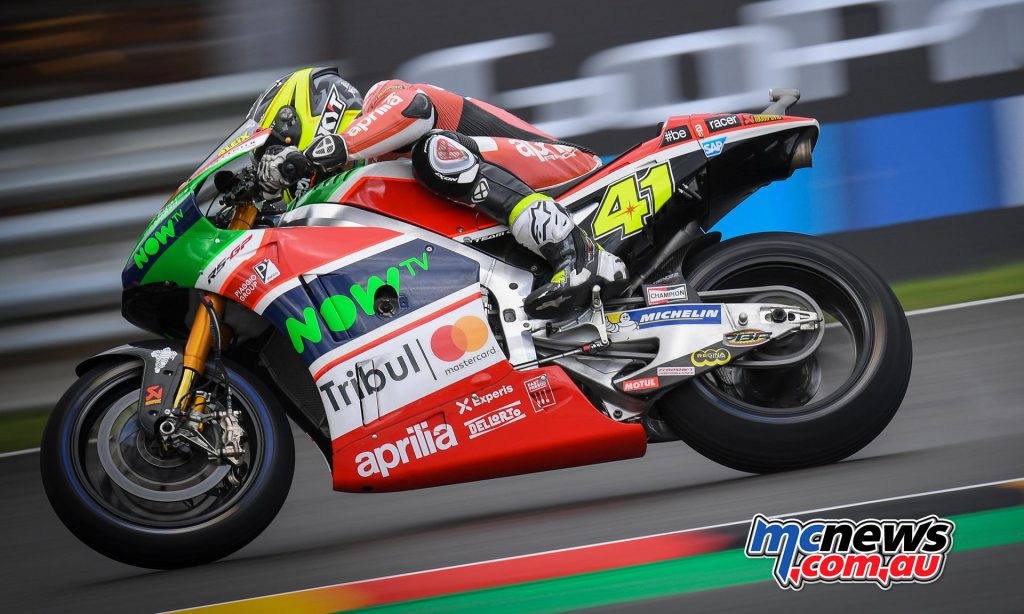 Folger took second and was clearly pleased with the result, as was Germany as a whole. Dani came home in third, and Vinales held off Rossi for fourth.

Of course, the championship standings are now even closer than before. Marquez leads with 129 points, Vinales (124) is five points behind him and only one ahead of Dovisoso (123), Rossi sits on 119 and Pedrosa is still in touch with 103. Sam Lowes crashed out again.

Now it’s time for some Ibiza, sunbathing, giggling girls, and all that good stuff MotoGP racers get to do during the summer break. Brno is four weeks away.

MV Agusta revisits the America in a Brutale 800 edition