In Part 2, we saw Brembo’s radial braking system adopted first in testing, followed by MotoGP, offering clearly superior performance, with Aprilia the earliest adopter, followed by Suzuki. Radial brake calipers would soon be the standard also in Superbike, as well as local competition.

From the track to the streets

This last taboo was beginning to fall away. Once again Brembo was successfully implementing its mission, transferring innovation and know-how from the track to the streets, putting them at the disposal of all motorcycle riders.

It was once again the manufacturer from Noale that believed in this solution. In 2003, while attempting to relaunch the latest evolution of the RSV Mille R, Aprilia decided to outfit the twin-cylinder with a pair of these new Brembo calipers, derived directly from racing.

The invention was quickly adopted by the other manufacturers because nobody wanted to be left behind. On the standard production bikes, the radial mount caliper proved to provide all the advantages displayed on the track and to bring out others as well.

The brake caliper, and as a consequence the pads, remain perfectly parallel to the disc resulting in uniform wear and guaranteeing consistency in the lever over time. All of this improves braking even more, aiding in the duration of the friction material as well, which tends towards uniform wear and a longer lifespan.

Even calipers for 125cc bikes produced by Brembo in India under the brand name ByBre – the Brembo brand for braking systems on scooters and small to medium-cylinder motorbikes – are radial calipers today.

What seemed like a bizarre idea of a group of visionary engineers just a few decades ago has now become the “de facto” standard in the industry, the loyal ally of every rider on the track and an object of desire on the part of all motorcycle riders.

Vision, wit and creativity combined with tenacity and perseverance helped Brembo do away with prejudice and resistance, against all odds. In a word, they enabled Brembo to innovate.

One of the characteristics of Brembo MotoGP brakes is their excellent consistency in performance even after repeated use. But not all the tracks are the same because on some the brakes are used for a longer time than on others: where this happens, there is an increase in operating temperature and greater wear on the friction material.

In order to assess this effect, Brembo have ranked the 18 tracks in the Championship, considering the percentage of time spent braking during each GP.

Not every braking session is the same because not all of the tracks are the same: there are those where you brake more violently and those where you brake less decisively/strongly. In order to demonstrate this characteristic, we have ranked the 18 MotoGP tracks based on the riders’ average deceleration.

Taking all of this data and variables into consideration, Brembo engineers have ranked the 18 circuits on a scale of 1 (not very demanding) to 5 (extremely demanding).

What makes a MotoGP braking session extremely hard? The answer is the result of several items: starting and finishing speed, deceleration expressed in g, but also braking time and space, as well as the load applied to the brake lever.

By considering and pondering all of these elements, Brembo has come up with a composite indicator of the difficulty of a braking section for the braking system. Here is the ranking of the five most demanding braking sections for the 2016 MotoGP season.

This is ranked number one thanks to its record 267 km/h reduction in speed. The MotoGP bikes go from 337 to 70km/h in 5.9 seconds and demand about 300 metres of braking distance. The 9kg of force applied to the brake lever are also noteworthy.

This corner earns its ranking because of the 12kg of force applied to the lever and the 6-second braking time required after a 1,076 straight where the riders reach speeds of 330km/h. The 270 metres of braking distance is also impressive.

The third step of the podium goes to this corner that is approached at just under 70km/h after touching 331km/h. Its 264km/h reduction in speed is frightful. Few corners in the world can match it, considering the fact that the braking session lasts six seconds and for about 289 metres.

This is a truly tough braking section because the bikes arrive after having reached 351km/h, the MotoGP top speed. Another record breaker is the 318metre braking distance needed to drop an incredible 260km/h in just 5.6 seconds.

The first braking section of the Championship demands 8kg of force on the lever and 5.2 seconds during which the bikes travel about 265 metres. After all, the MotoGP bikes reach 350km/h and drop 244km/h.\

If you didn’t catch the interesting first two instalment of this feature then please use the links below to follow the story of motorcycle radial brake development from the beginning. 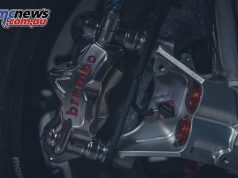 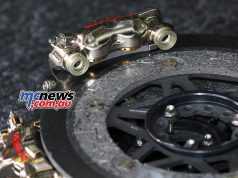 Brembo | 40 years of winning in MotoGP 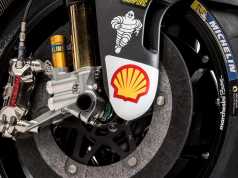